Four nights down, two to go. The racing was hot in Grenoble, the sideshows, arguably, just as hot. Edmond Hood was on the scene, working hard, making money, and making sure we get the best view possible at one of the six day season’s most unique events. Read on!

Franco brought Roquefort cheese in for breakfast, today. Fresh baguettes, Roquefort, coffee and good chat with six day riders – and I get paid for this? 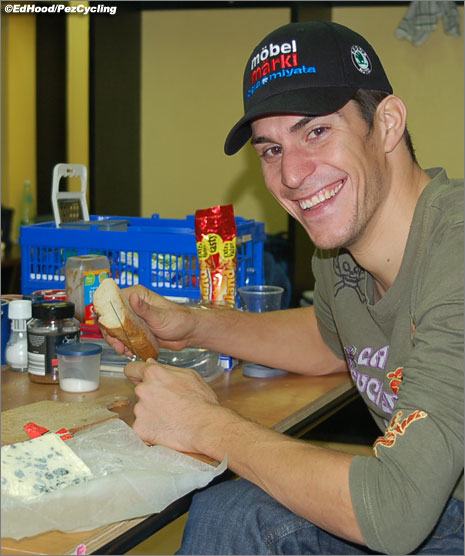 Not a bad way to start the day!

Maybe I’ll feel different at 1:00 am when I’m emptying those pee pails! 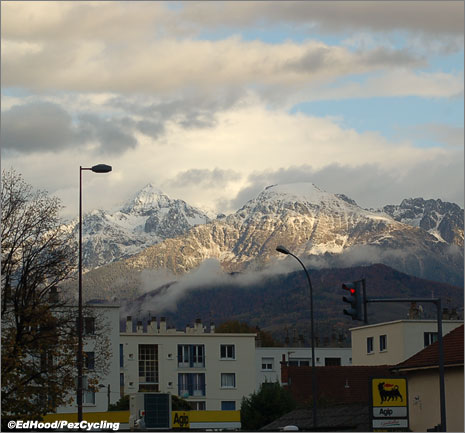 A fresh dusting of snow in the ALps in November…nice.

There was snow on the mountains, over night – beautiful; as long as it stays there and doesn’t decide to lay on the autoroute for our charge to Geneva, after the finish on Tuesday night. 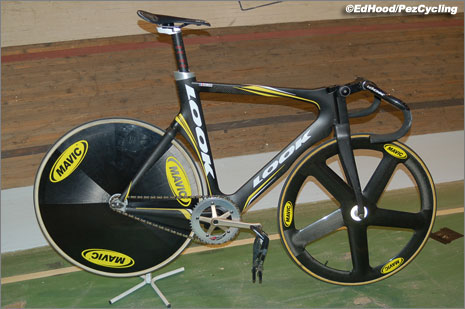 In the calm of the day, I decided to have a look at Gregory Bauge’s sprint bike. The Looks aren’t quite at the cutting edge any more – they were when they first appeared on the scene – top of the podium is reserved for the GB ‘Super Bikes,’ but they’re still pretty hot. Bauge’s position is extreme – high seat, low, low bars. 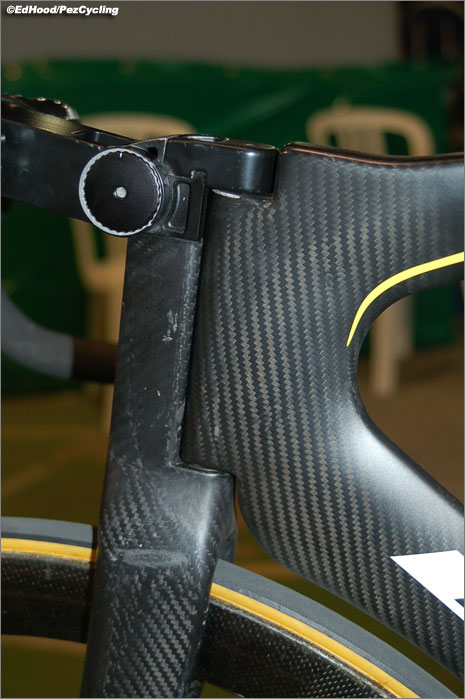 The ‘external steerer’ steering arrangement has been copied by several manufacturers, especially for time trial bikes because it let’s the extension come in flush with the line of the top of the top tube. 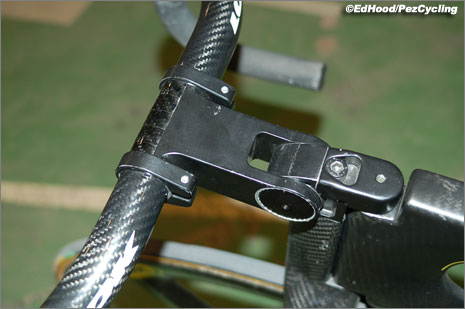 The adjustable stem looks like something from a steel factory, but when the big 24 year-old from Guadaloupe turns the gas on, ‘industrial strength’ is exactly what’s needed. 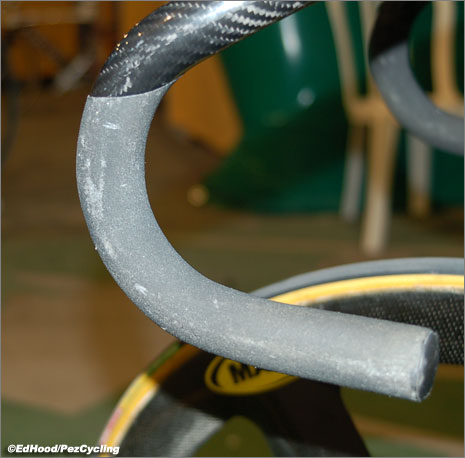 Carbon bars have no tape, but the gripping area has a ‘sand blasted’ finish to give a non slip finish. 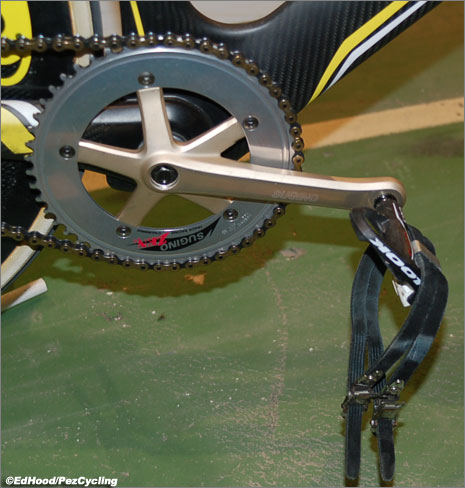 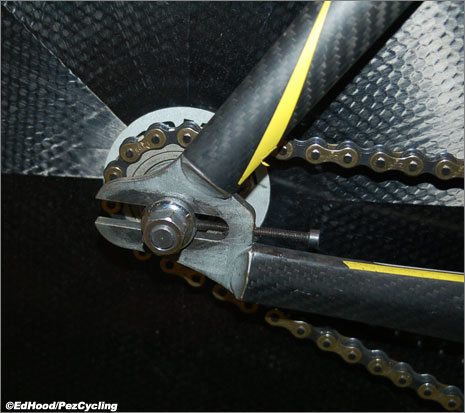 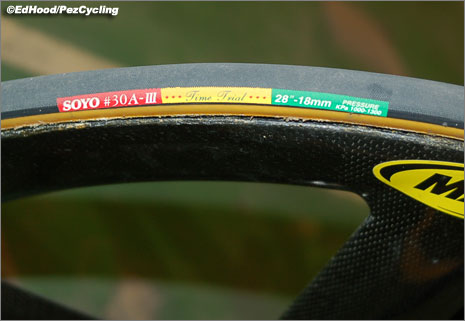 Wheels are by Mavic – their ‘fastest front wheel in the world’ five spoke and a disc rear. Rubber is Soyo front, Vittoria rear. Light, stiff, aero and mean looking; not much more you can want from a sprint bike. 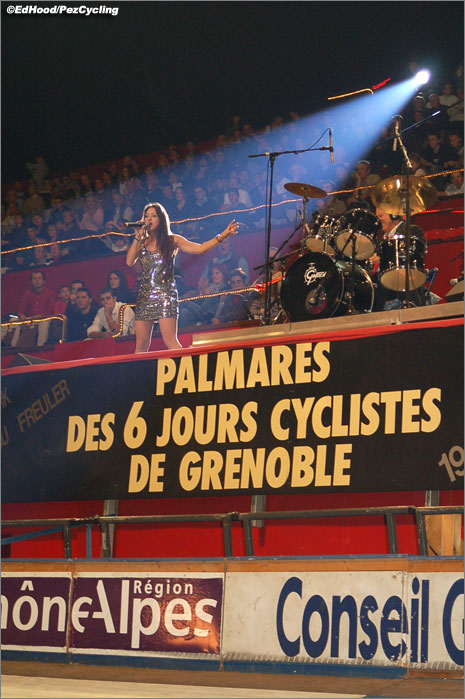 “Start breakin’ the news,” she belts out, if you’re a Sinatra fan, you’ll know it’s, “spreadin” the news; but when she has that black evening dress on – I’d forgive her anything. The silver mini dress, later in the night and I don’t even notice her butchering, “I will survive.” She’s the soundtrack to the first race, the 36 lap sprint series – a warm up really. 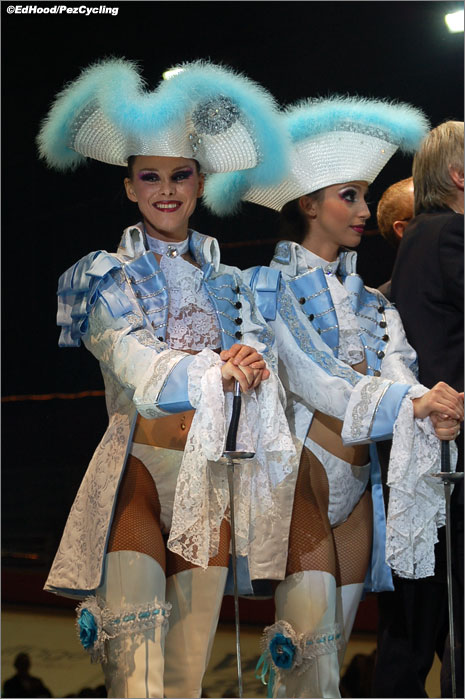 It will be a while before we get to witness the folies again, so enjoy one last time.

On the subject of scantily dressed ladies, the Folies girls never fail to attract a keen audience of six day men, glued to that big monitor. 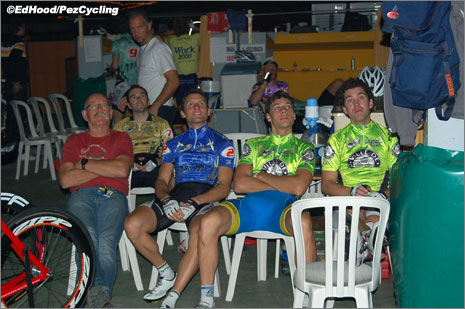 Racers and staff didn’t pass up watching the folies’ show.

Nobody was particularly motivated to train today – and the sessions on the boards were short.

Tomorrow will be different, there’ll be a big group zooming round, chatting – it’s pay day, then go home! 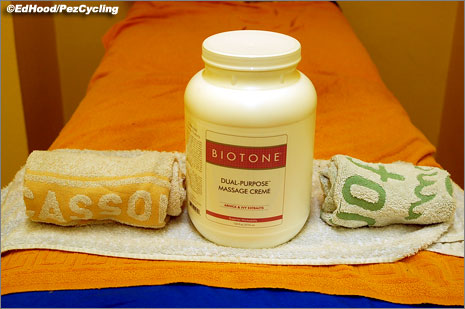 “Biotone,” that’s the name on the world’s best massage cream, according to Kris – made in San Diego and if anyone from there is reading, free samples can get to him via Pez. Tristan got new shades, today – red and white Oakley Jaw Bones, cool with his red and white Swiss top. 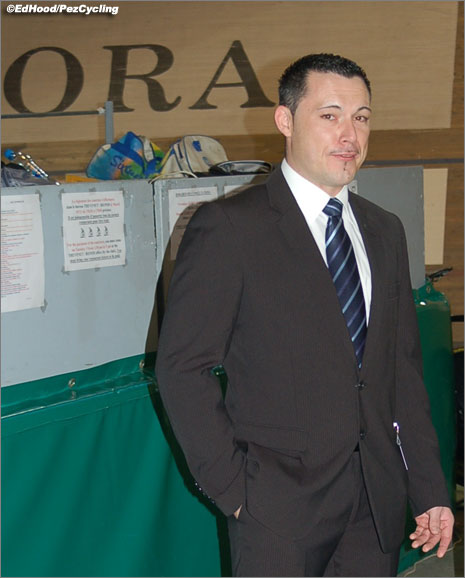 Previous winners, Bincoletto and Baffi were in the track the other day and another star of not so long ago, sprinter Arnaud Tournant, appeared last night. Four Olympic medals; 14 World champs gold – nine in the team sprint – three silver and two bronze – not a bad haul!

The chase wasn’t the hardest, tonight; the programme here is unlike any other six – the chase is shorter at 35 minutes and it comes early, just part of the whole show – not a grand finale. In all other sixes, the chase is the climax; here there are four races crammed into the last hour – the cabaret occupies most of the time in between. The last race is a madison devil, the little teams know they have no chance, go out early and head for the showers – that’s the trouble with looking after big riders, they’re always one of the last to go out !

The Final Night
“L’anй prochaine,” – ‘next year,’ the security guard and I say to each other as we shake hands at 12:50 am on Wednesday morning. 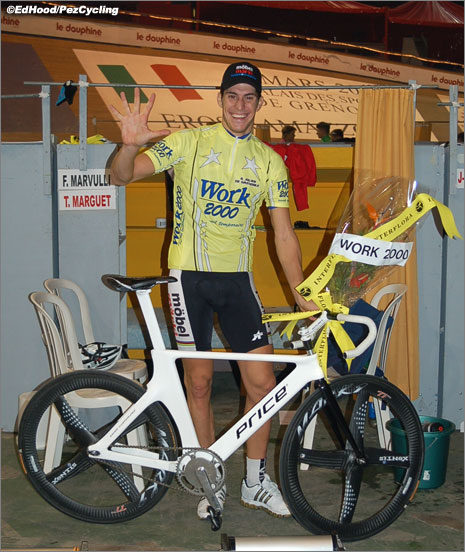 The Grenoble six day has been won and lost; Franco Marvulli tonight became the undisputed ‘record man’ for ‘Les Six Jours de Grenoble’ – with five wins. He hops above Aeschbach, Baffi, Sercu and Van Lancker, all on four.

The lap gain came late in the game; Marvulli/Roberts attacked with Van Bon/Vermeulen to take the lap they needed to prize them clear of the superior points total of Keisse/Meersman.

Marvulli was rampant, sometime doing double spells to give his Aussie partner more time to recover. 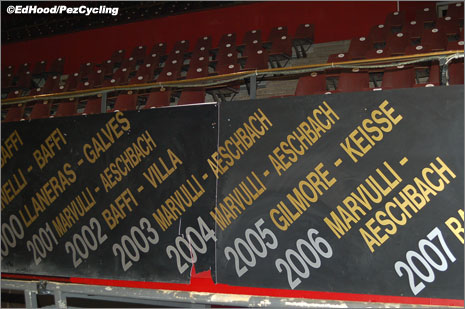 Franco adds his name to the palmares for a fifth time.

It’s now 01:15 and we’re headed north through the rain on the autoroute to Geneva and our plane home.

It’s been a long day, but a very rewarding one; as well as the ‘record man’ we had Tristan Marquet in the cabin – the young Swiss partnered diesel engined compatriot and four times Grenoble winner, Alexander Aeschbach to the points win.

Van Bon/Vermeulen carried on where they left off after a strong showing at Amsterdam. Van Bon’s ability to sit rock solid at high tempos is a big asset in any chase. 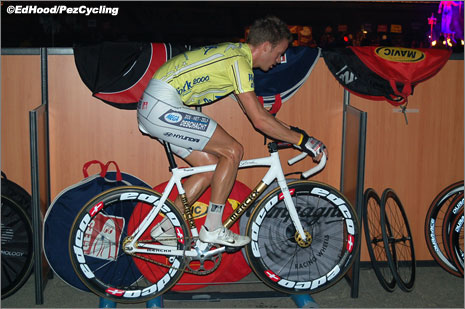 Iljo Keisse warming up for the big chase.

Keisse was happy with the third, given that he might have been leaving the race on Monday had the hearing about his positive test at the Gent six in 2008 swung the wrong way. 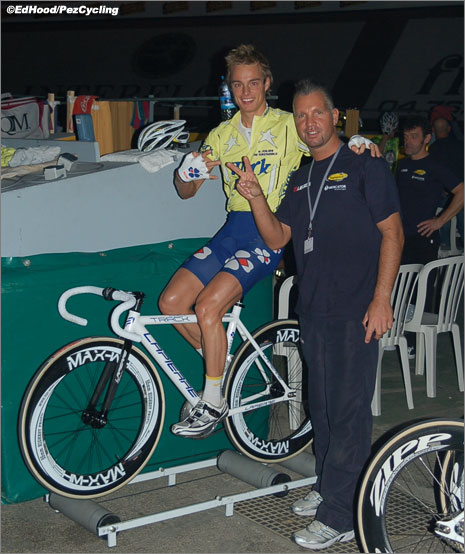 Gianni Meersman put in a stellar ride in his first Six Day appearance.

For a first time six day ride, Meersman’s was from the top drawer; maybe not this year, but Keisse/Meersman looks like a Gent pairing of the future to us.

But in the end, it was Franco Marvulli who the press were getting the quotes from – on his day, he fully lives up to his nickname, “Marvellous!”

Now that we’ve got that serious journo stuff out of the way, let’s talk about day six. 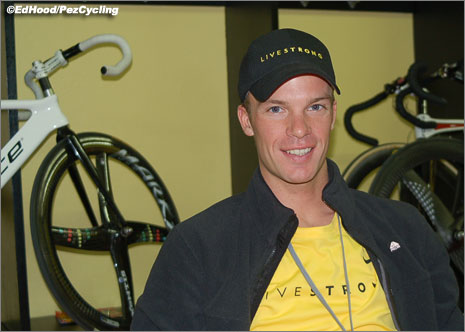 Reaction to the Iljo interview has been swift, ‘whitewash’ say some, others say common sense prevailed. If I’m being pragmatic about it, the one thing this six day season did not need, was to lose iljo Keisse; “I’ll drink to that !” I can hear them saying up in Gent.

The guys were preoccupied before the chase; on the final night only, the madison is the last race and the big show of the session – 180 laps, that’s around 38 K with sprint points at 80, 120, 150 K and double points on the line. I missed a lot of it, breaking camp, but caught the finale. 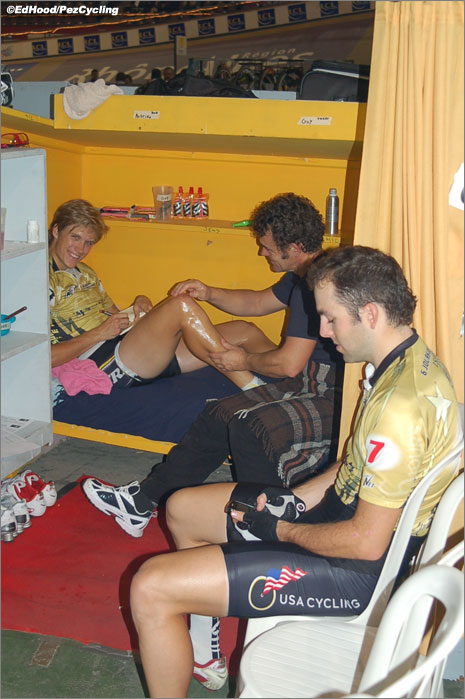 Guy East and Austin Carroll were solid for the six nights.

It’s not a proper six unless it all hangs on the last sprint – or in this case, the late final lap gain, which was completed inside two to go.

The chase was a good one but we had to have our usual look at proceedings, first.

I chatted to Jonathan Mouchel, tonight, he’s riding here. Four times pursuit champion of France, he’s ridden the Worlds and World Cups. He reckons that Grenoble will only last a few more years – what I didn’t know was that behind the banks of spectator seat, there’s another tier of the stadium, but it’s blanked of with heavy black curtains; “ten years ago, those curtains were open and those seats were full of people, up to the roof!” Let’s hope he’s wrong, this is a unique six, with a nice ambiance – not just beer and derny exhaust fumes.

Daniel was obsessed with getting his picture taken with the snake charmer, tonight; I was dragged in to the track centre to photograph him with the reptile. 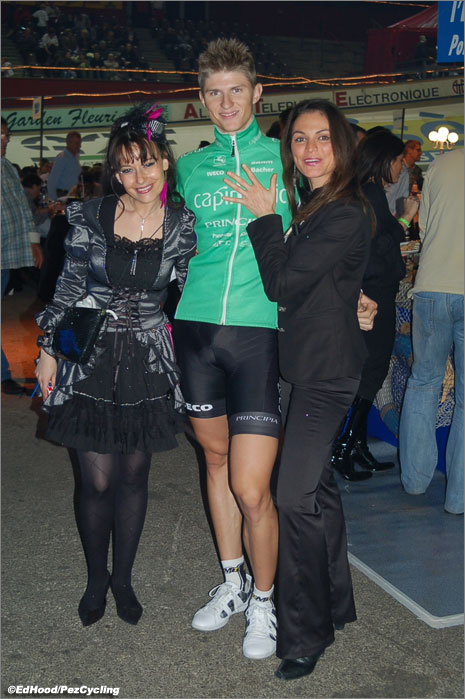 No snakes to be found, but…

We couldn’t find any snakes, but we did stumble upon some foxes.

Whilst I was in there, I found the press area; complete with fine wines and cuisine. I may have to rethink this gig, next year; our staple is baguettes, cheese and coffee! 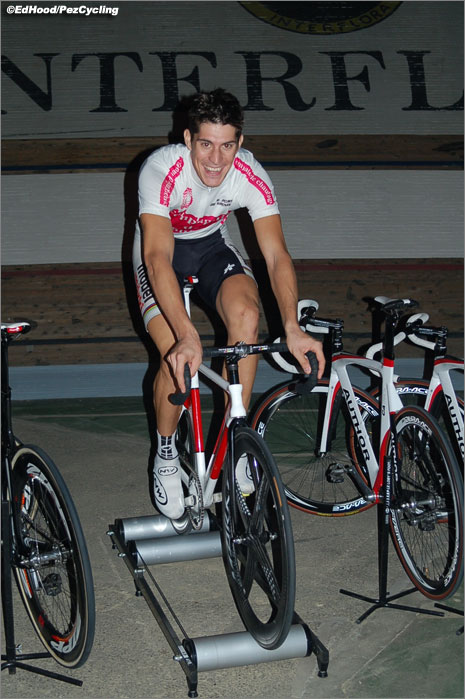 Franco readies for the win.

Rollers were the thing tonight, Franco, Daniel, Jens and Tristan all loosened their legs on them before that last chase. So did Keisse and Meersman, but at leg speeds which were just a blur. 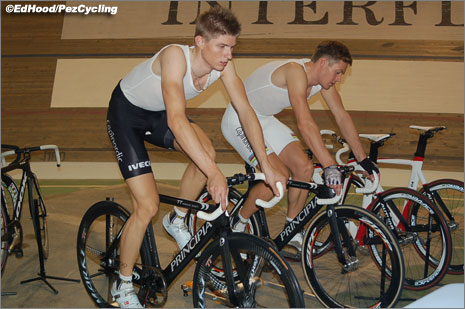 Daniel and Jens getting ready one last time in Grenoble.

The prize presentations at Grenoble are always cool, the band, the Folies girls, the lights, the coloured paper from the ceiling – great stuff. 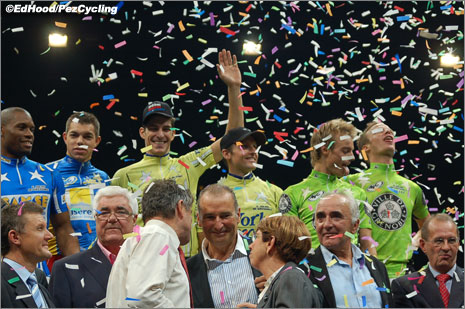 A happy Marvulli and Roberts on the top step of the podium in Grenoble.

And then it’s time to break camp, pack, shake hands, exchange emails and to remember how little sleep you’ve had, how much your feet hurt – but most of all, how much you love this wonderful sport.

See you at Gent !