The first two nights of racing have come and gone in Grenoble. PEZ’s Ed Hood is on the scene working hard, but never far away from his camera or pen and paper. Ed takes us inside the twilight world of the Six Day. Read on!

The Theatre: the city of Grenoble, ‘Capital of the Alps.” Some 156,000 people live in the city, but the greater urban area is home to around 427,000 souls. The Dauphinй Alps tower over the city which sits at the confluence of the Drac and Isиre rivers. 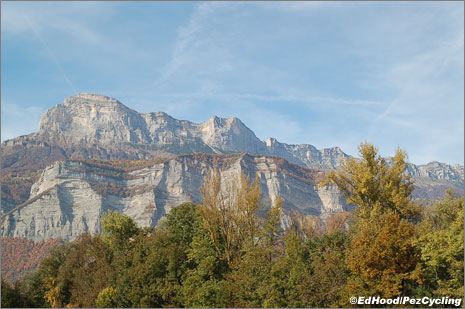 Mountain sports are big business here and ski stations ring the city, high in the mountains – Alpe d’Huez isn’t far away. There has been a settlement on the site for 2,000 years; but industry here is ultra modern – the biggest employers are in the field of semi-conductors.

The stage: The Stade de Alpes fits right in with Grenoble’s vision of itself – concrete soars towards the clear, blue Alpine sky in gull wing-like form; futuristic and hi-tech. The area around the track has been extensively redeveloped since I was last here and the first glimpse of the Stade, after a few years absence, is certainly impressive. 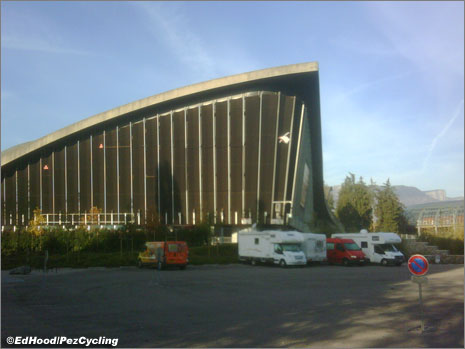 Ed’s place of residence for the six days is the camper on the far right.

Next door is the equally impressive glass structure where Grenoble Foot 38 play soccer.

The palmares: There’s been a six held here every year since 1971 – in fact there were two that year, one at the tail end of one season and then another early the following season. Six day legend, Peter Post (Holland) partnered dashing Frenchman, Alain Van Lancker for the first one. Van Lancker came back later in the year with countryman, Jacky Mourioux and won that one too. 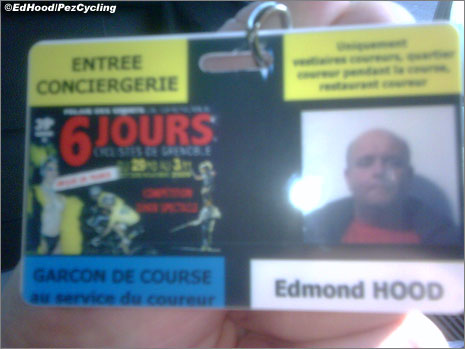 Interestingly, current ‘capo’ Bruno Risi has never won here – the race’s clash with the Dortmund six kept the flying Swiss away from Grenoble’s nice autumn climes and up in cold Germany, where the start money envelope was fatter. However, Grenoble has had the last laugh – whilst Dortmund has succumbed to the recession, the French race marches on. 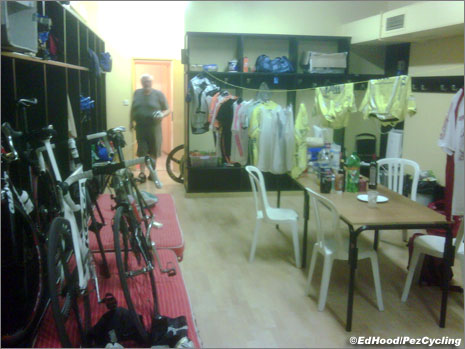 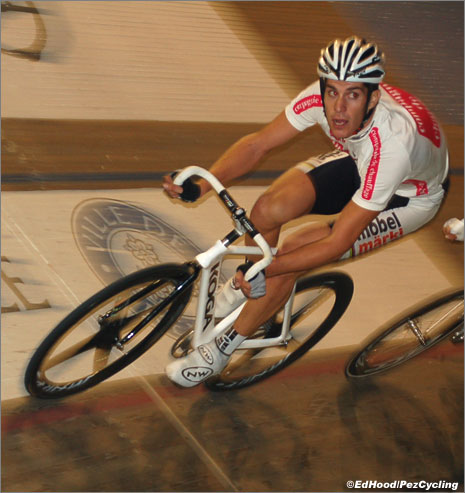 Up and coming Daniel Kreutzfeldt (Denmark) took silver in the world points championship, back in the spring; he rides with countryman and team pursuit world champion, Jens-Erik Madsen. Iljo Keisse (Belgium) won 11 kermesses over the summer and has the same number of six day winner’s sashes in his jersey pocket; he’s partnered by his stylish young countryman, Gianni Meersman. 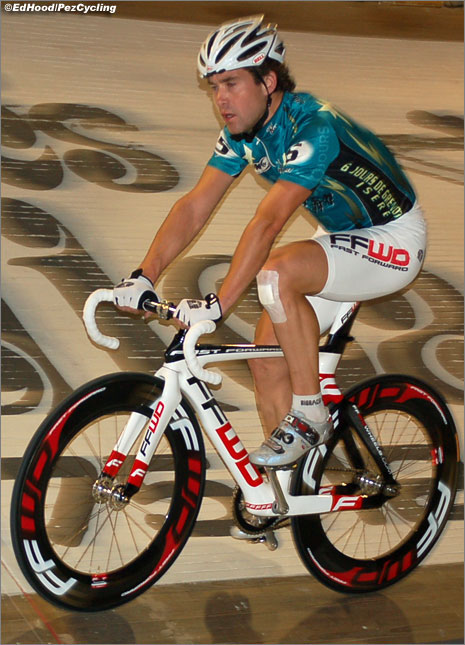 Leon Van Bon (Holland) has been twice Dutch pro road champion, a Tour and Vuelta stage winner and according to Marvulli was; “very strong” at Amsterdam, countryman Jeff Vermeulen partners him – he too showed well at Amsterdam. And the New World is represented too – not Colby and Hollywood (I know, it’s Holloway) but Guy East from Indianapolis and Austin Carroll from California. There are other six day regulars in there – Belgians Dimitri Defauw and Steven Deneef, Marc Hester (Denmark) and a clutch of Frenchmen – (bon chance, mes amis!) 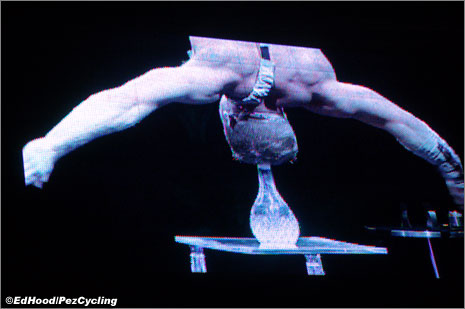 The play: Cycling is only part of the plot at Grenoble. This year there’s Jan Navratil, juggler extraordinaire from the Czech Republic; Djulia, female ‘contortionniste’ from Ukraine (I can’t wait!); France’s Willy Weldens, shown in the programme balancing by his head on a bottle, not to mention Russian acrobats, ‘the Men in Black,’ but I don’t think it’s the same ones the UCI were looking for. 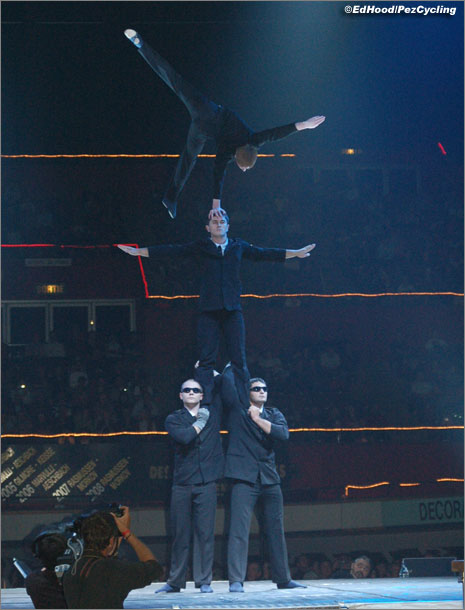 The Men In Black.

Night one: One of the French guys was suffering badly in the madison; he came in for the mechanics to check his handlebar to extension connection – judging by the look on his face and the hand gestures, tragedy was imminent. The mechanics tried hard to find a little slack in bolts already torque wrenched tight – for the benefit of the commissaire who had stalked round the track to see why there was a man not earning his start money. The back handed, head shaking, eye rolling half push the mechanic gave the Frenchman back into the fray, said it all.

The cabaret acts looked good, the Folies girls were topless – as usual; their routines are never really challenging – but no one seems to mind. 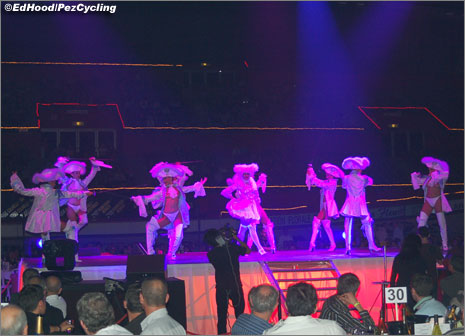 They did their thing to The Gossip’s ‘Heavy Cross’ – the big bass pumping out in the hall, the light show and the colour -cool!

On the subject of young ladies and bare flesh, the chanteuse backing the house band was flashing huge expanses of thigh – who cares if she forgot the words to, Hot and Cold? 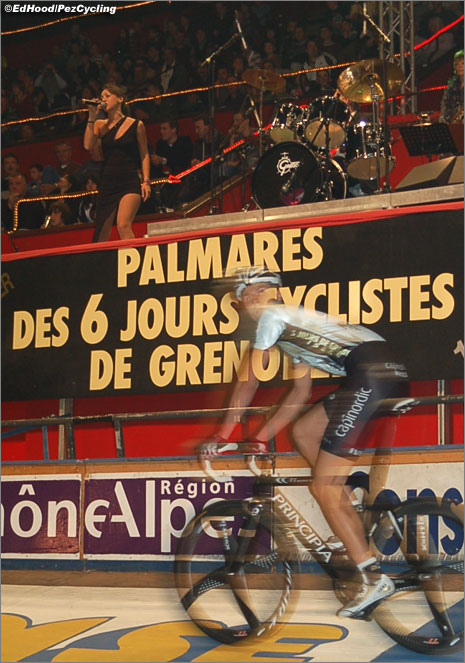 The racing was as you would expect; the locals out of their depth, the capo finding their legs after a long drive from the north – Jens-Erik and Daniel had 17 hours of tarmac and tolls to get here – and the crowd wasn’t the biggest.

The two Danes did two hours on the road in the afternoon; it must have stretched their legs just fine – they won the 35 minute chase and took the leaders’ yellow jersey. 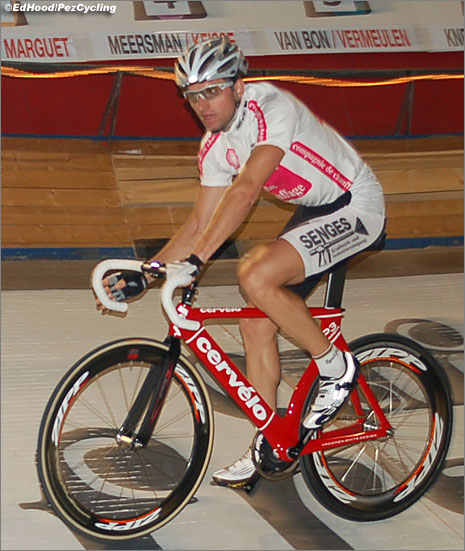 01:50 am and I should really have used a scalpel to take those socks off. 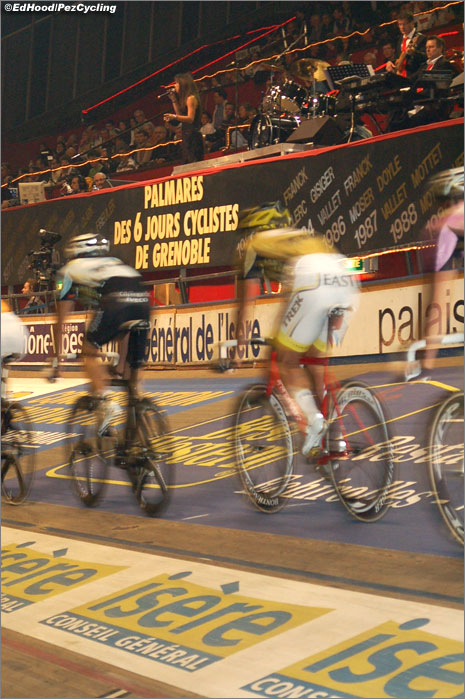 The racing wasn’t great – Gossip apart – the music not the best, but the mood in the camp is good, we’ve got the overall and points leaders jerseys in the cabin – mustn’t grumble.

“What time are we setting that alarm for, Kris?”

The Second Day And Night
It’s another glorious day in Grenoble, I slept like a brick from 02:00 am ’til 08:30 and was blinking in the autumn sunlight as I stumbled across the car park from the camper van to the bakers, for the baguettes. First up, before breakfast is to sort out the washing, then tidy the cabin, then the track cabins – and then you can have your grub. 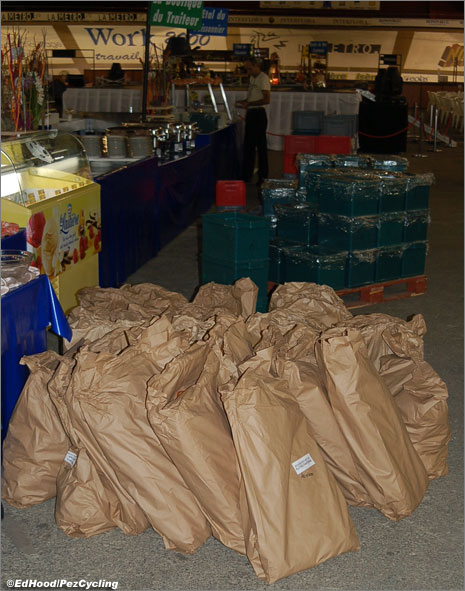 The afternoon is time to yourself; or to send pictures and write – depending on how sad you are.

I was doing some internet homework, for an interview with Luke Roberts, when Franco sat down beside me and decided we should check his stats: 25 wins, 19 seconds and 9 thirds off 83 starts – pretty impressive! 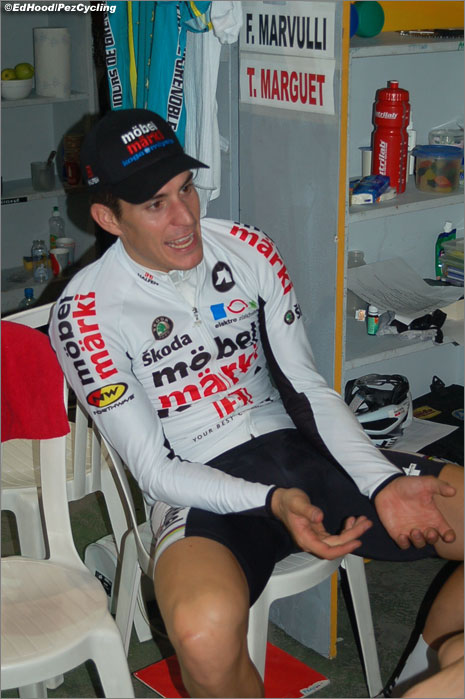 Djulia, the contortionist, looks well worth a close look, but the dude on the track centre entrance isn’t much into negotiations – our passes only get us into the cyclists area – my rap to try and get up close for some pictures, got a one word response; “badge!?” 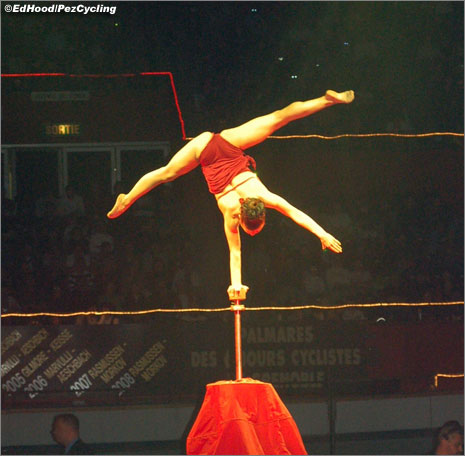 The female singer with the band wheeled out new outfits for night two; tiny red and white fluffy dresses – damn, I need a bigger lens, 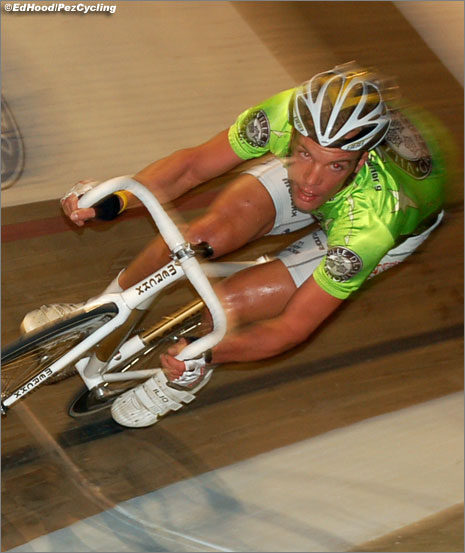 Keisse is looking good, his partner, Gianni Meersman is making a good impression in his first six; his hand slinging has real power and he’s quick through the traffic. 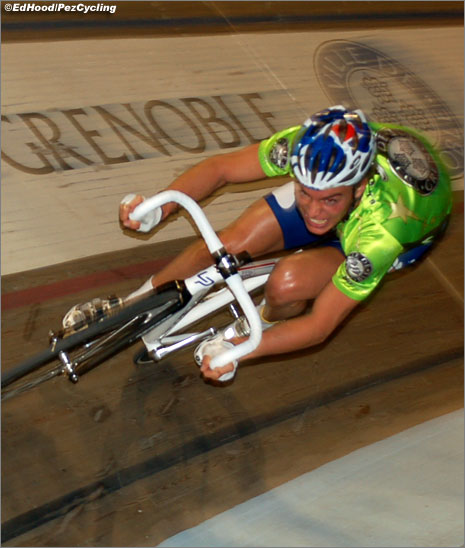 We lost the leader’s jerseys, tonight, after the madison. Laurent Biondi – ex world points champion, who is on the organisation team – came over and took them away; Jens and Daniel looked at each other and shrugged. 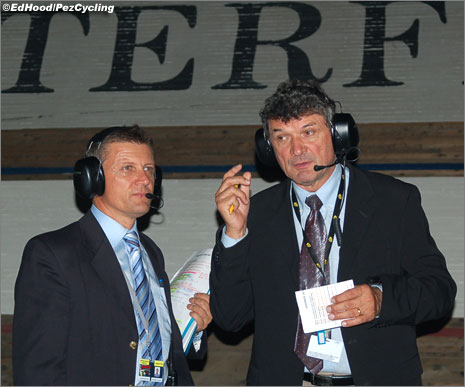 That’s one of the things about Grenoble, in order to keep the sponsors happy, there’s a jersey for everything – overall, points, fastest time trial and so on.

The pro programme is set so that the 35 minute chase is early, the sprinter competitions and cabaret are in the middle of the evening and the final pro races are crammed into the end of the programme.

By then everyone is tired and it’s hard to keep a handle on who is wearing what jersey – the last time I checked, Van Bon and Jeff Vermeulen were leading.

The sprinters competitions are big here, straight sprinting, keirin, time trials – France has always had good sprinters and it’s part of the tradition of the six; the crowd loves it. The big men get more attention than the six day riders, with constant interviews for the likes of Gregory Bauge. 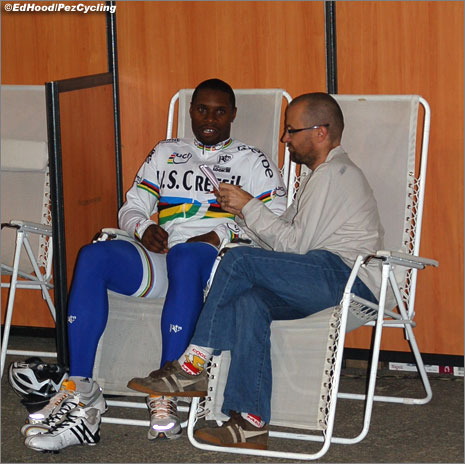 Gregory Bauge being interviewed for the nth time.

It’s not until you stand track side and two of these giants hurtle past at 70 kph, that you realise just how fast they really are. World sprint champion, Kevin Sireau is here, too; he took the world 200 metre record this year – 9.5 seconds! 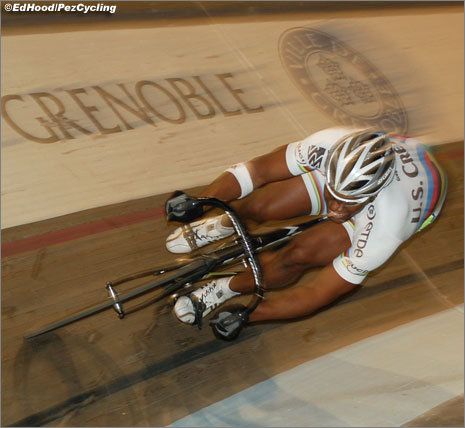 Among the ‘attractions’ for the crowd is the snake charmer who mingles, whilst draped in a huge white serpent – uurrrrggghhhh! 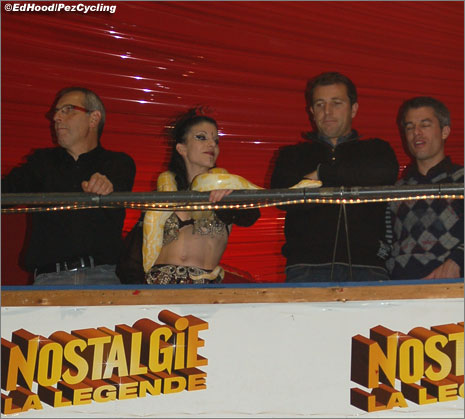 The French guys who ride the six are on small contracts and don’t bring soigneurs, mechanics and runners; they do it all themselves – or drag the wife along. I took pity on one of them last night and dried his sweaty vest and jersey in our tumble drier, but don’t tell anyone.

The last devil was cool for me, Jens went out on lap one, Tristan on lap three – two less jersey changes. 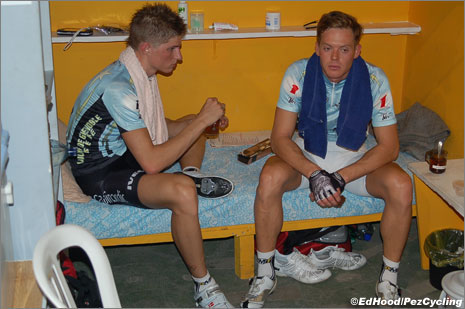 It was a long night.

And with a cascade of panting young men, bikes, sweaty jerseys, helmets, shoes and half drunk cups of Coke – it’s all over.

Time to make the toasties and do the washing – a demain!