Grenoble’09: The Circus Parties On

Four nights down, two to go. What does that mean? An update from Ed of course! Ed is hard at work keeping his boys happy and fast in Grenoble, and they’re doing their part by going fast. Let’s go inside the Stade for a peek at the sights, sounds, scenes, and well, the folies, of the French Six Day. Read on!

Saturday night; but not at the movies – I’ve just finished my final wipe of the helmets and shoes, not to mention Franco and Tristan’s bikes. Mechanic? It’s a long story!

There are big crowds in already for the young girls and guys racing – it could well be a full house, tonight.

With it being the biggest night of the week, the entertainment carries on later than normal – the pros saddle up for the, “elimination par equipe” at 01:25 – Kris is worried we’ll get locked in. They are supposed to lock the doors at 03:00am, that should just about give us enough time to feed the boys and do the washing – you’ll be the first to know! 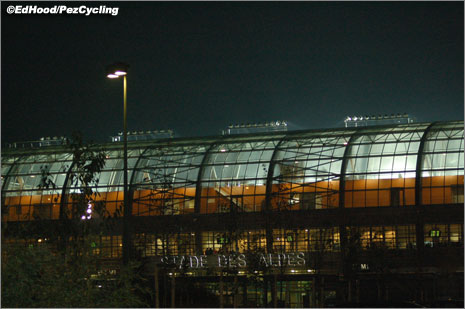 The football stadium at night.

There’s a football match on at the Le Stade des Alpes, next door – the stadium looks like it just landed from Mars, very futuristic. 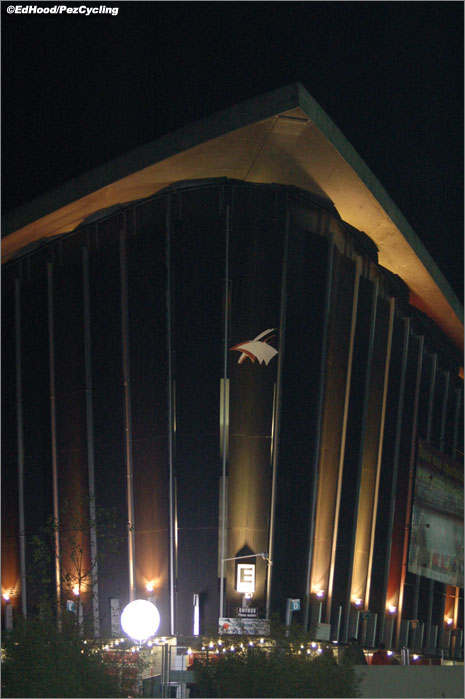 The Stade next door to the football match – the Six Day home.

The six piece band has just fired up, 20:20 and the pro intros are imminent – only six hours work to go!

Grenoble is one of the few sixes where they don’t do a “rolling” presentation – the field rides round in a string with the two team members side by side, the speaker tells the crowd about each team, who in turn, swing off and tag on the back. At Grenoble, the teams – and those Golden Boy sprinters – appear at the exits above the straights, get hit with the spotlights, a blast from the band and a rap from Daniel Mangeas. 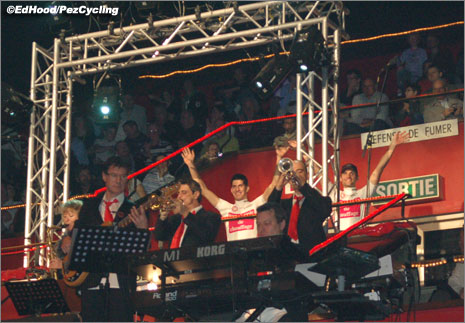 No such thing as an uncomfortable presentation for Franco and Luke!

The little teams are a tad, “rabbit caught in the headlights-ish,” whilst Franco steps forward, thrusts his chest out, throws his long arms skywards and beams from ear to ear – star quality! 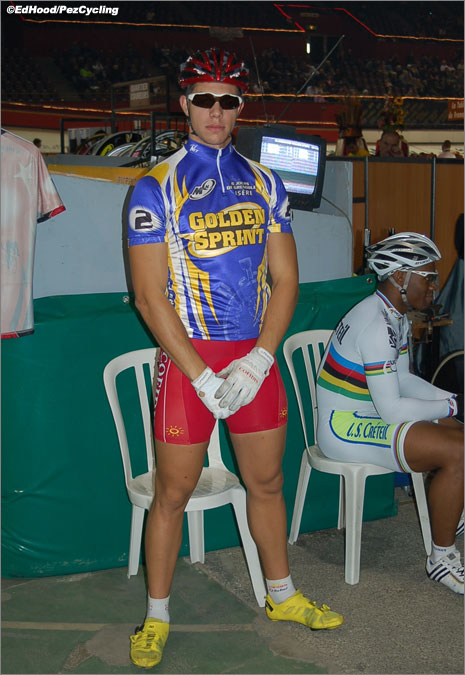 I passed the sprinters – Bauge, Bourgain, Sireau and co – in the tunnel under the track; big torsos, little woolie scarves, swaggering along like Ralph Lauren models headed for a photo shoot. I wonder if they know Chris Hoy rode 9.8 at Manchester, yesterday? 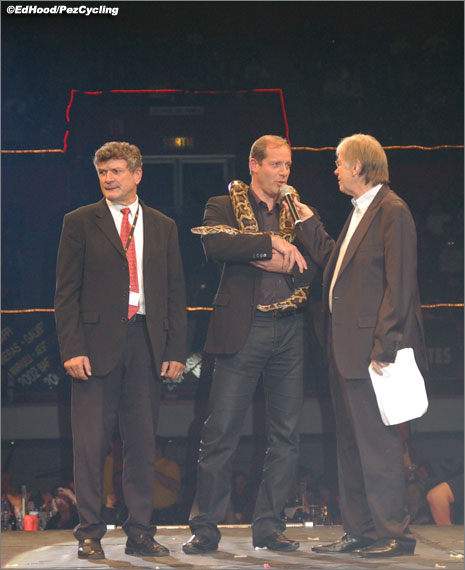 Christian Prudhomme got a surprise present on stage.

We had Tour de France organiser, Christian Prudhomme as a visitor, tonight. I’m not sure why they draped the snake charmer’s scaly baby around his neck; and will make no further comment! 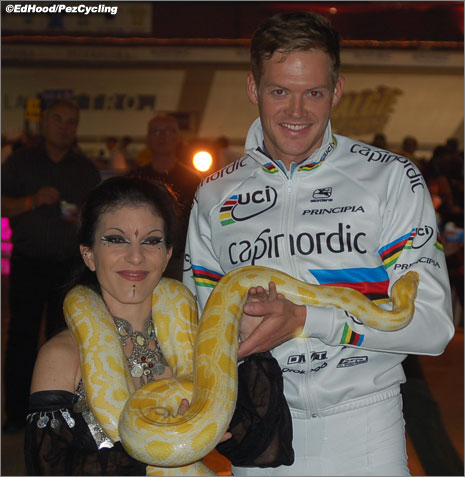 Jens-Erik was happy to give the snake a chance though.

On the subject of snakes, Jens-Erik wasn’t going to be happy ’til we took his picture with the snake; whilst I interviewed Luke Roberts, Kris turned photog and snapped our boy with the reptile. 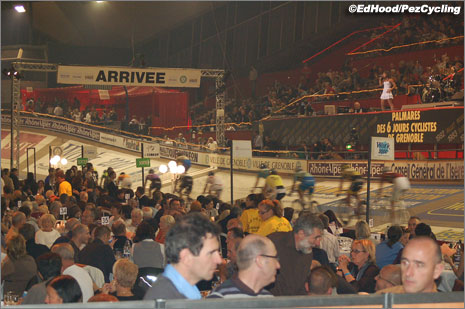 The chase was a toughie, strained faces, missed changes, splintered peloton – Franco and Luke came out of it in maillot jaunes, though – good news for the Kris cabin. 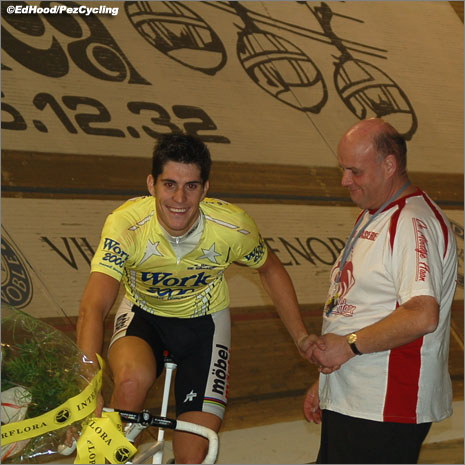 A Maillot Jaune for Franco…with Ed there to congratulate him.

The are only four of those yellow leaders’ jerseys; Laurent Biondi hauls them straight off the back of one team and gives it to another. It took a lot of time in our tumble drier with those little fabric strips that make the clothes smell nice, to get the jersey to stop smelling like a dead coyote – the joys! 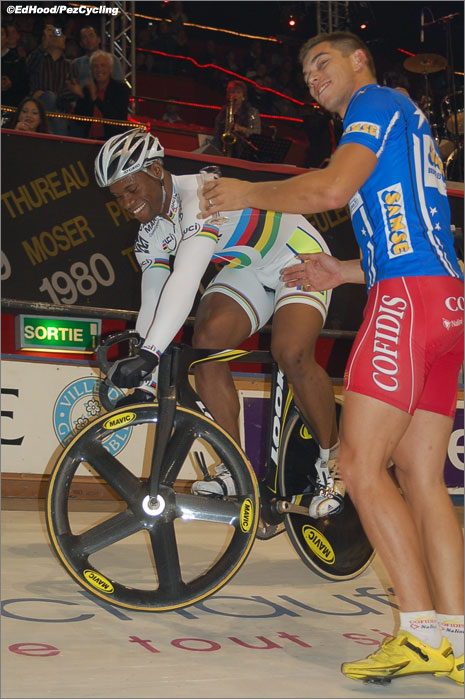 Meanwhile, in the “only at Grenoble” file, we had a standstill contest for the sprinters; much appreciated by our guys, who spent the time relaxing. In case you’re wondering, Gregory Bauge lasted longest – 34 minutes and 25 seconds before he keeled over. Daniel Mangeas talked for the entire period, whilst Kevin Sireau plied Bauge with champagne – it was different!

It’s gone midnight and normally we’d planning our escape, but there’s still an hour to go.

A saving grace is that part of the time will be taken up with le Folies girls. Jens-Erik and Daniel walked straight in on the girls on their first routine tonight, past security – their passes don’t work in there. But despite Jens’ rainbow jersey, the paying public were throwing water at him and Daniel because the boys were standing up and blocking the view of all that expensive silicone. 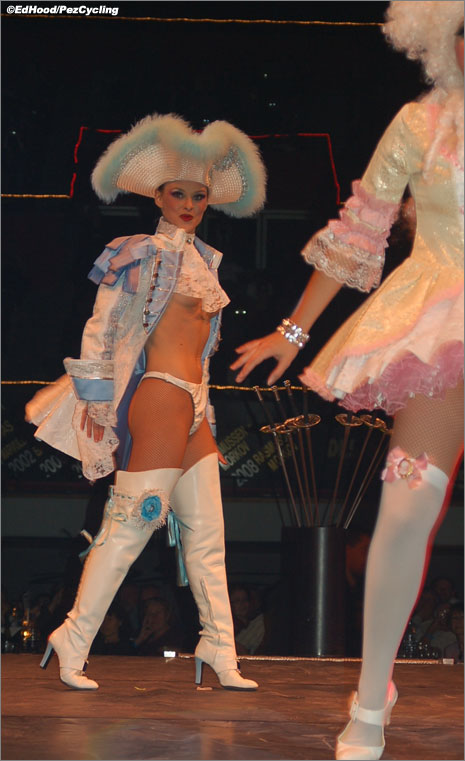 The race that’s taking place just now is the “defi doublette,” this is a chase which somehow involves having to take two laps but involves all sorts of machinations which Kris and I can’t get our heads round – as long as the boys know what’s going on!

Bauge bit the dust tonight, it sounded like an oak tree coming down; he hirpled off with the medics – maybe it was that champagne? Bourgain came down too and has ‘some of that concussion stuff,’ as the skate boarders say.

One of the French guys nicked Franco’s flowers – and we thought it was the Belgians we had to watch !

Sunday, Day 4
It was, ‘Ed the stunned duck’ this morning, as I stumbled across the car park to the bakers. The blue rinsed matrons in for their Sunday pastries were wondering who this strange man was, buying all the baguettes and croissants.

I’ve just realised that I haven’t hit you with any stats for Grenoble, here goes:

4: number of victories for the joint ‘record men’ – Aeschbach (Switzerland), Baffi (Italy), Sercu (Belgium), Van Lancker (France) and – Marvulli, he can nail that record on Tuesday!
8: the number of nationalities represented, Australia, Belgium, Czech Republic, Denmark, France, Holland, Switzerland, United States.
10.768: the track record, in seconds, standing to Michael Bourgain from 2007.
19: the number of years since a French team won – Colotti & Tarantini. (remind me to tell you about that one, later!) Colotti did win again in ’94, but not with a Frenchman – Aussie, Dean Woods.
210: track distance in metres.
31,600: the prize money, in euros.
36,000: the number of oysters consumed by the crowd over the week – huh? where did that one come from?

Our afternoon watering hole, the Bar Clemenceau was closed today, so we wandered off in search of an alternative. Bar Satellite is combined with a bookies – I know guys in Scotland who would think this was Nirvana, albeit you’re not allowed to sell alcohol in a betting shop in the UK. 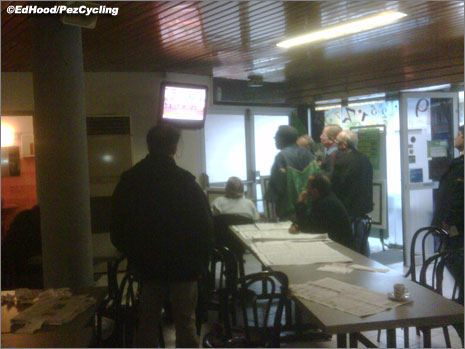 Betting on horses is a universal language; “Aaahhhh!” “Oooooohh!” then crumple up the line, through it away and bolt for the door.

First race is the points, Jens-Erik and Daniel win, the chase is the next bike race – after sundry contortionists, jugglers and magicians – but where’s that damn snake ? L’Americaine – that’s madison – isn’t a killer, the chanteuse belts out Sinatra as the chase rattles and swishes past her feet. 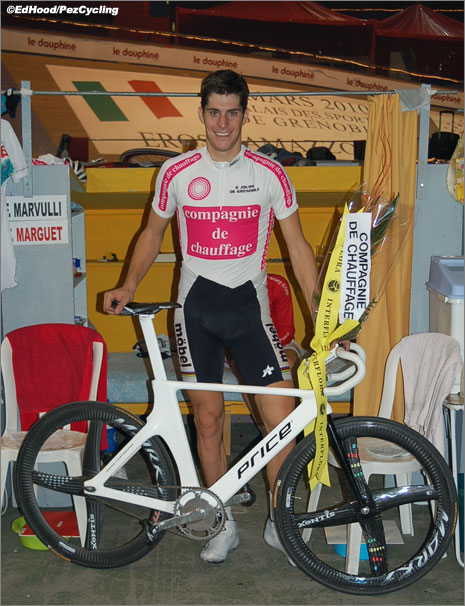 Franco and Luke lose the leader’s jersey to Van Bon and Vermeulen; ‘that’s life!’ says “Marvellous” when I tell him that I’m disappointed not to be working for the race leader. I have a feeling it’s a temporary situation.

Next up are the Folies girls – these long range shots are no good; amble round the track, hop the track fence – this is better! Hope you like the pics! 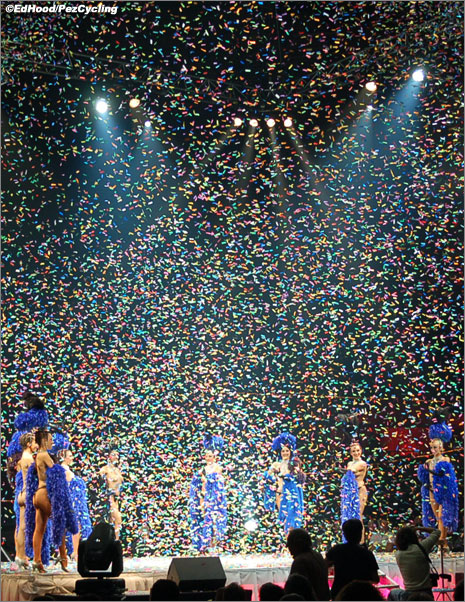 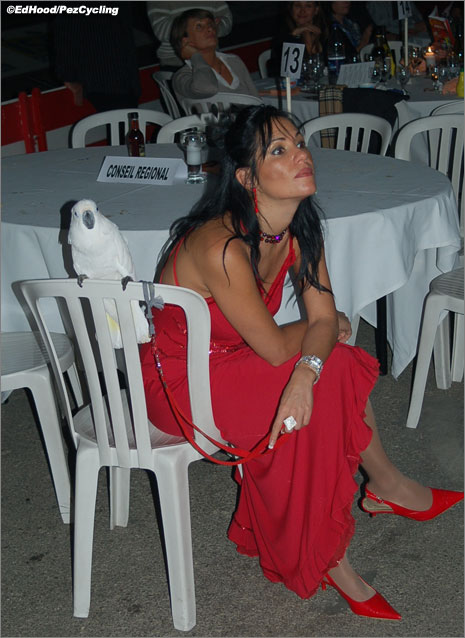 The crowd isn’t huge tonight, but most of the track centre tables are filled; good food, fine wine, bike racing, magic tricks at your table, great acts, a live band and singer with high hem lines – not bad for 50 euros!

On the subject of crowds; the nasty rumour is that if advanced ticket sales aren’t good at Bremen – scratch one more German six! 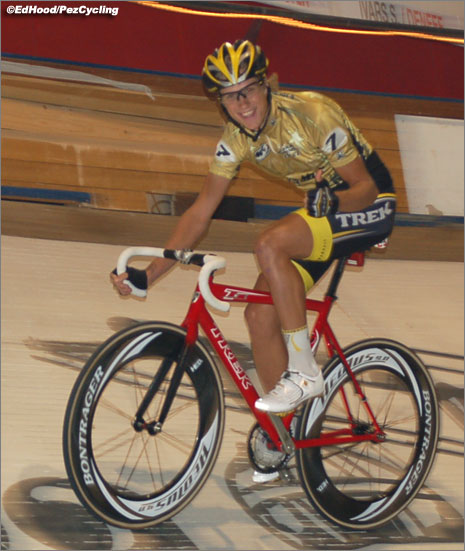 The two young Americans who are riding, Guy East and Austin Carroll gave me a shout; they’re Pez readers – good boys – so the interview is set for Monday night. 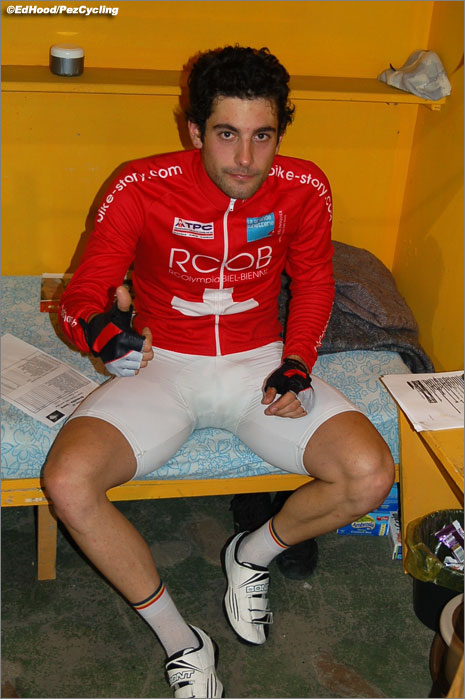 Tristan has been mighty quick so far.

The band blasts ‘Tequila!’ as another devil runs its course and Tristan beats Iljo, again. Iljo does his ‘airborne front wheel’ thing, but our boy has a good kick and it’s more points to the Kris cabin. 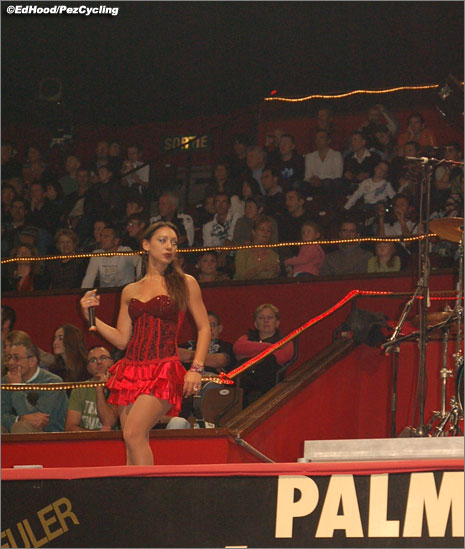 The singer is back for the last race; I need to get closer for a good picture, from track side she looks great.

But then they’re coming down off the track – helmets, mitts, jerseys, shoes, fly and it’s time for me to do my thing.

Four down, two to go.