Inside The Copenhagen Six: Danish Triumph!

Alcazar’s ‘Crying at the discotheque’ may have been the soundtrack to Alex Rasmussen’s huge attack in the closing minutes of the 2009 Six Days of Copenhagen; but the only tears shed some 17 laps later were those of joy as home boy, ‘Razi’ and his Denmark and Saxo Bank ‘other half,’ Michael Morkov sent the full house home happy from Ballerup Super Arena.

On the penultimate night it had looked like the best the young Danes could hope for would be second behind the swashbuckling William Tell duo of Franco Marvulli and Bruno Risi.

But as the first tread band broke the finish line timing beam on the stroke of midnight on Tuesday, the classy Swiss had to settle for third, denied their hat trick at Copenhagen by the young men in the legendary number seven, ‘Danish flag’ jersey, but also behind the Dutch duo of Peter Schep and Danny Stam. 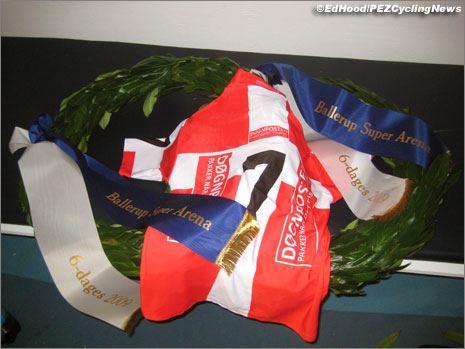 The Dutch men had looked the freshest in the 70 minute chase which decided the race and indeed, finished level on laps with the Danes. But the home team’s domination of the nightly flying laps and dernys meant that they had a far superior points total as the witching hour fell. Pez was with the winners throughout the day of this, their third six day win; Grenoble having fallen to them for the last two years.

Breakfast, and it’s not every day you have your orange juice with a legend; but Patrick Sercu is sitting just two tables away from us this morning – we’re in the same room, so I’m claiming it as “breakfast with the Flemish Arrow!” 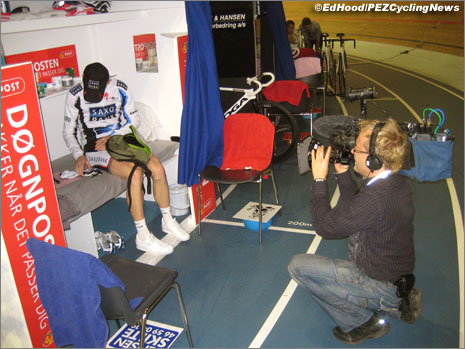 No activity was too small to film.

The TV cameraman and reporter have tailed Michael the whole day. Massage, lunch, getting ready for the race, during the race – it’s a pain for us; but that’s what life’s like when you become a showman.

Talking of TV, one of the Danish networks is covering the final night, live. When we arrive there are strangers everywhere – and kilometres of cables. 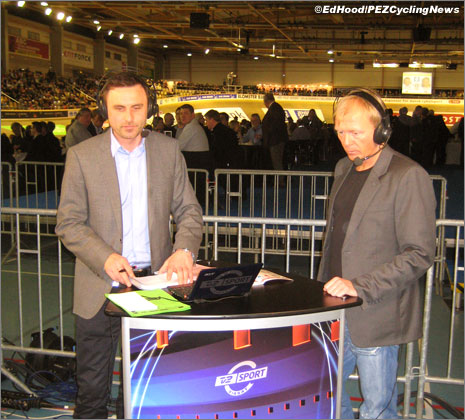 The not so long ago retired Jakob Piil was on hand for the commentary.

Jakob Piil, who was the last Danish winner here, with Jimmy Madsen, four years ago, is doing the TV pundit thing – he still looks in good shape.

The rolling presentation of the field sees Michael and Alex receive a rapturous reception from the big crowd. 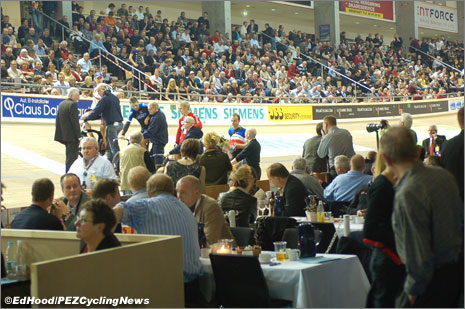 We’ve got a full house tonight!

Marvulli wins more wine, in one of the sprints – these races baffle us, but the boys come back with lots of prizes, win or lose, so we’re not complaining. 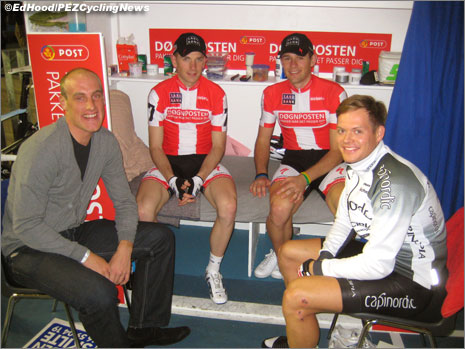 Jens-Erik – far right – perked up a bit on the final day and had some fun.

Jens-Erik has been a bit ‘down’ all week, but he’s perked-up today; could that be because it’s pay day?

Dernys, Franco hates them, I’ve never seen him win behind them; Michael’s been dominant here, but Stam takes this one. The race was no sooner finished than the little beasts were scurried off into the back of vans and estate cars and are offsky; next outing, Cremona, Italy – 2,500 kilometres away 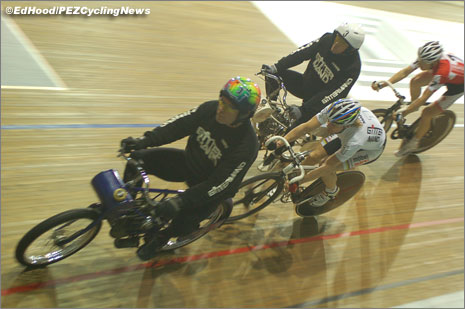 Franco doesn’t like the derny…but Bruno doesn’t mind so much.

Casper Jorgensen comes to visit us; with Alex, Michael and Jens-Erik he made up the silver medal winning 3:56 Beijing Danish team pursuit squad. He was supposed to ride the six, but injury prevented him – it doesn’t stop him from laughing all the time, though.

Everyone is twitchy; the final chase is on all of their minds. 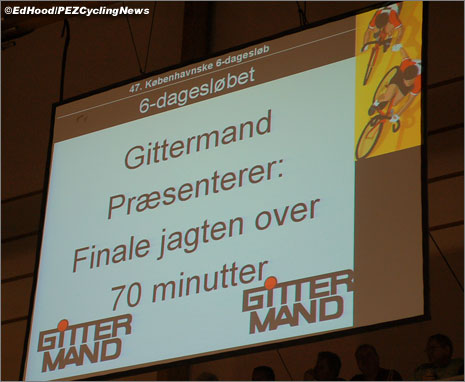 The ghost of the final madison looms large.

A visitor, ‘BS’ the ex army man who puts the Saxo Bank team through it’s paces; Michael tells us that all the team, including him, are waiting on a character assessment arriving from ‘BS’ and his advisers, based on what they had seen at the ‘Survival Camp.” Bjarne Riis, love the man or hate him, he doesn’t do things by halves. BS is accompanied by eccentric Saxo Bank mechanic, Christophe – he doesn’t let us down with his new, dyed blonde hair do. 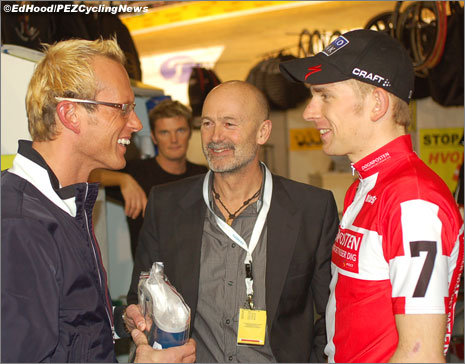 BS Christiansen was on hand to see his two SaxoBank boys put on a show.

On the last night, it’s easy to let the cabins go, but I force myself to ‘do the rounds,’ tidy the shoes, fold the clothes for the tenth time, check the drinks, ask the guys if they need anything.

There are kids in the enclosure tonight, they argue about who to seek autographs from; meanwhile, just centimetres away sits a quiet, anonymous, older guy – Patrick Sercu, the most successful six day rider in history and an athlete of amazing versatility. The man was Olympic kilometre champion, world sprint champion and green jersey in the Tour.

The sprints, and the guys just go through the motions, that 70 minute chase hangs in the air like a ghost.

There’s a ‘special event;’ a presentation for Jacob Moe – it’s his last race and he gets a ‘guard of honour,’ flowers and big respect from the crowd. 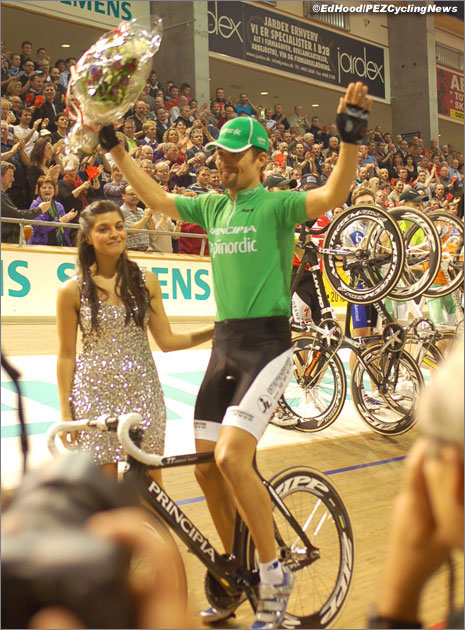 Jacob Moe called it a career on the final night and received quite the going away ceremony.

‘Hollywood’ gives us ‘We will rock you’ and ‘Born in the USA’ one more time; “thank you for the entertainment, Mr. Holloway – it’s been outstanding,” says the announcer – I’ll second that. Tomorrow night at this time, I’ll miss Daniel and his crazy fun.

Franco leans on me, the crowd is counting down for the start of a killer 70 minute chase, but the big guy still has a wink for the crowd. 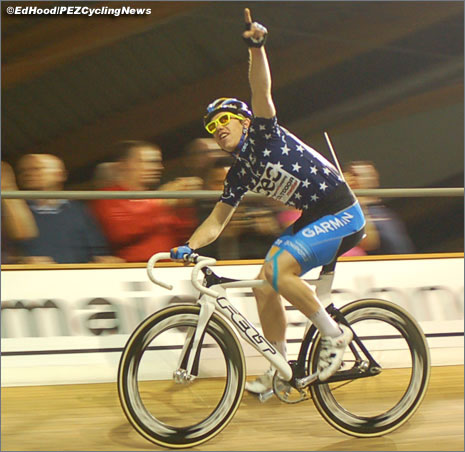 Hollywood loves his fans, and the fans love him.

I give him an almighty shove. .

The next 70 minutes will decide whose names are painted on the fence above the banking as winners of the 2009 Six Days of Copenhagen. But first I have to empty and disinfect the pee pails and strip out our neat little cabins which we tried so hard to make comfortable for our guys. 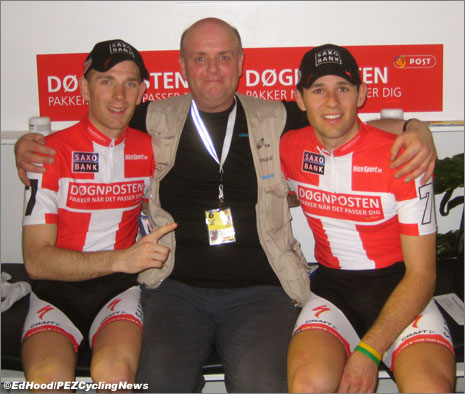 Not to spoil it or anything, but this was to be a happy ending kind of night.

By the time I do that, the clock says 49 minutes to go and the overall standings are: Rasmussen & Morkov 230 points; Risi & Marvulli 208 points; Stam & Schep 146 points, all on the zero lap. Bartko & Lampater are one lap back and de Ketele & Mertens are crumbling at five laps.

Half distance, 35 to go and it’s status quo, except that the Belgians are seven back and Mertens looks very rough. The music is hot, the racing’s not. For me, it’s Stam and Schep; they look the perkiest. Daniel Holloway misses a change, Colby has to do a double spell – ouch! 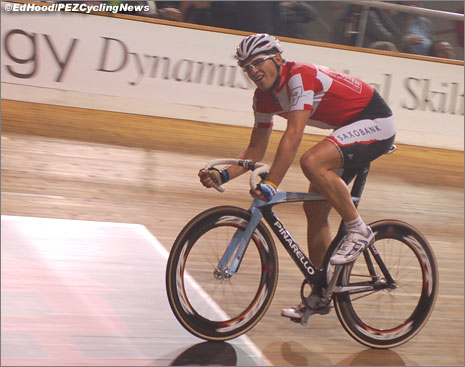 The minnows are clawing the odd lap now – a sure sign that the tempo isn’t savage. They know that Sercu is watching and he wants men who go for laps – he has crowds to please. 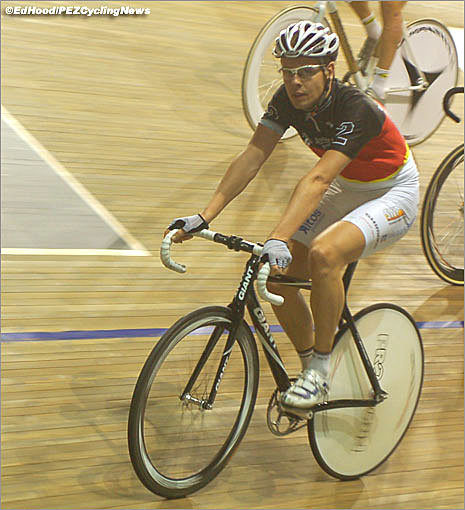 The count down board switches from minutes to laps – 45 to go.

‘Vamos a la playa!’ the Balearic beat pumps; are they kidding – it’s Denmark in February! The results board hasn’t changed it’s rap, the boys still lead on points from the Swiss and Dutch on the same lap.

Kris tells me to go and check the ‘kontrol’ notification; Jens-Erik and the white number from the winning team are the ones that affect us. 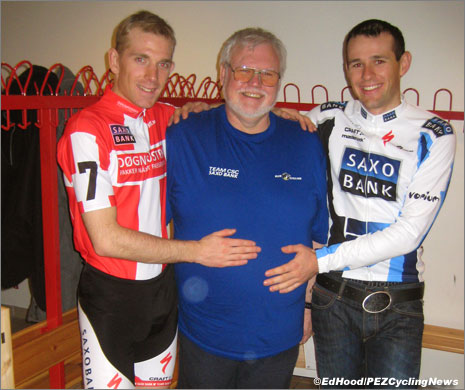 Kris with his boys.

Stam and Schep snaffle a lap; they make it look easy, and now they lead by 250 metres. Marvulli and Risi try and try to get them back, but Lampater closes them down. 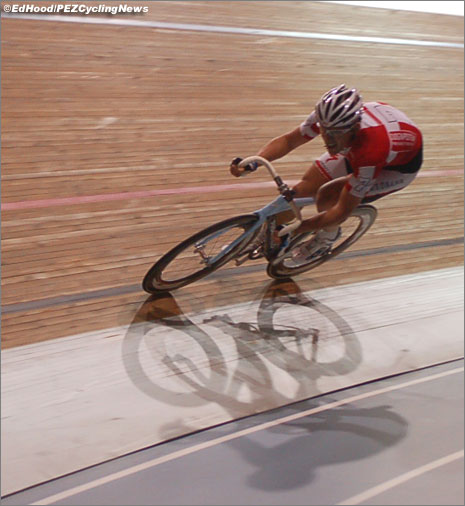 The laps tick down – 20, 19, 18 and then the roof lifts off as Alex launches and seals his place, with Michael up there on the fence. 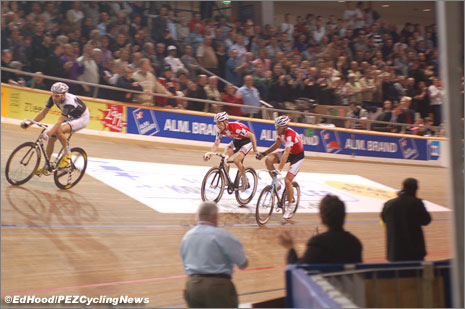 Morkov and Rasmussen get their lap back and the certain win.

After the presentations, it’s chaos as everybody wants a piece of the winners – TV, press, photographers, friends, family, fans and autograph hunters. 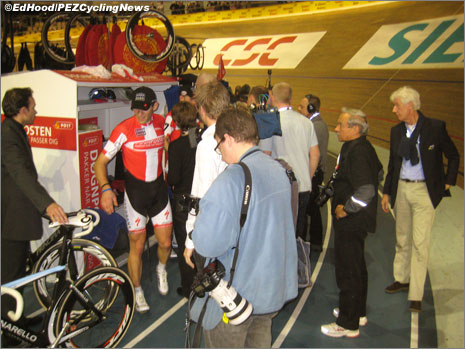 Chaos is a fair description.

I have to keep an eye on the guys’ mobile phones and gear as Kris starts to shuttle the gear to the camper. 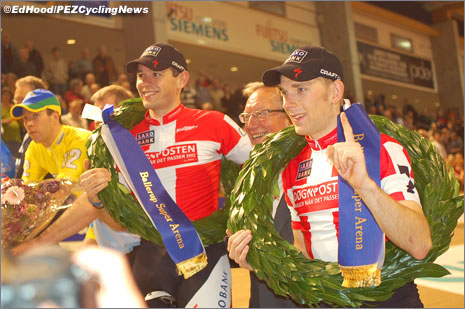 It’s gone 1.30 am; hand shakes, pictures, laughs, cuddles, kisses, maybe a few tears and it’s time for the three hour drive through the frost and mist to Billund. 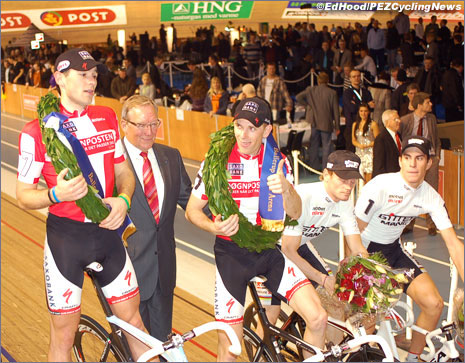