Inside The Copenhagen Six With Ed Hood!

Marvulli goes with four laps to go, he makes the hand sling and Risi is in; Bruno hasn’t been well in this race but he’s a pro and there’s a job to do. Behind there are another five teams on the zero lap, it’s the first full house of the race and besides, it’s only 6.00 pm and Sunday’s session is finished after this sprint. But sixes are about the paying public and there’s only one team that they want to see win… 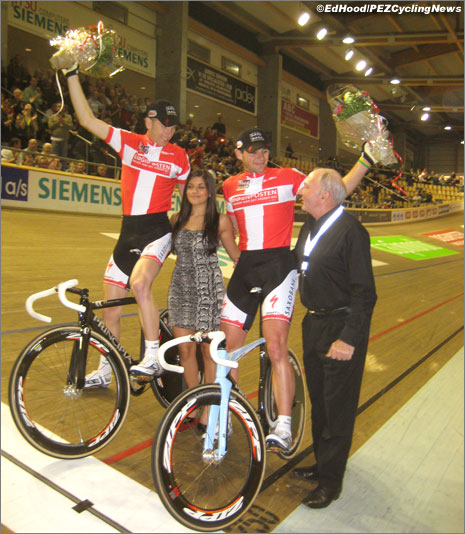 Winning is good. Winning at home? Even better.

The applause is long, loud and from the heart; when I first worked at the sixes, the two young Danes were up and coming – now they’ve arrived. Both have Worlds and Olympic medals to their name and it’s to the home boys that the TV crews head after the finish. But medals and interviews don’t pay the bills – their fresh contracts with Saxo Bank do that, and Alex’s new Audi estate testifies that all’s well at the bank. 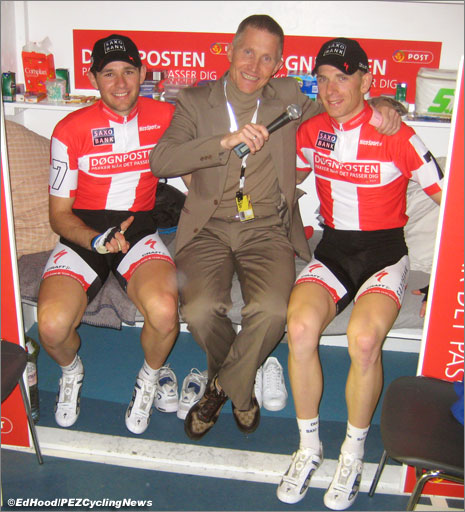 All is well in the worlds of Michael Morkov and Alex Rasmussen (it ain’t too shabby for Mr. Brian Holm either!).

Copenhagen is a good six to win; many of the biggest names have won here; Van Steenbergen, Sercu, Gilmore, Clark, Doyle, Risi – but is it the young Danes’ time? Dues must be paid and whilst Alex and Michael have twice won at Grenoble they’re not aboard the ‘Blue Train’ – the ‘capo’ or ‘heads’ who call the play on the circuit. Bruno Risi ranks fifth in the all-time winners list, his total now stands close to 60 wins – no one can deny that he’s still the ‘Master.’ 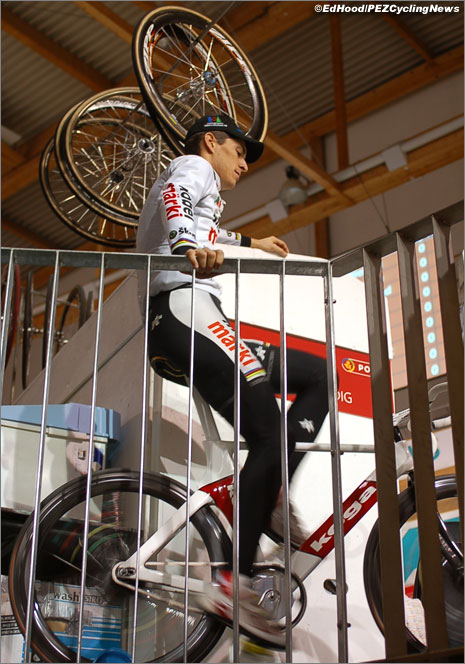 The man who stands to inherit the crown, Bruno’s fellow Swiss Franco Marvulli, is another of the top men; 23 wins confirm that. Dutchman Danny Stam is also an influential man, his long term partner Robert Slippens retired recently, his frail body ravaged by crash injuries.

Stam’s regular partner is now another Dutchman, the tall and stylish former world points champion, Peter Schep. Germany has always been another strong six day nation and former double Olympic champion (Sydney 2000, pursuit and team pursuit) and bear on a bike, Robert Bartko is one of the top guns. His partner, countryman and perhaps king in the ascendance, Leif Lampater has risen right to the top after a remarkably short period of time and is another whose word matters. 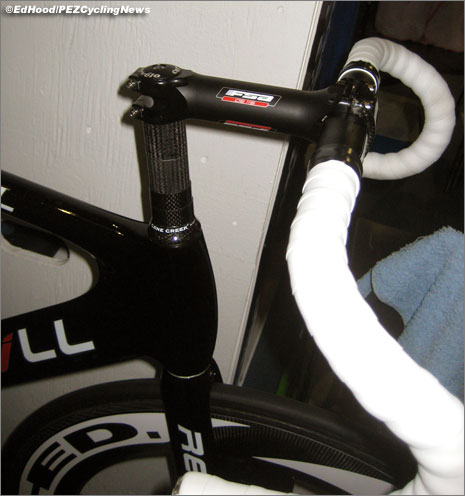 Ed ain’t lyin’ when he says that Bartko is a big bear of a man. 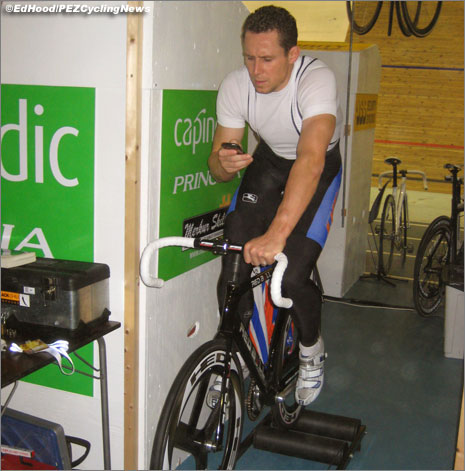 And like any great big bear of a man, there’s texting and biking to be done.

I think that the Danes are worth the win, but this season they’ll be roadmen with Saxo Bank and Bjarne Riis won’t want them burning themselves out in sixes when there’s the Schlecks and Fabian to be looked after. That’s the thing with the ‘Blue Train,’ you can’t just take the Copenhagen stop, you have to be aboard at every station – Rotterdam, Munich, Dortmund, Berlin

And the story so far?

The crowds haven’t been the best, except Sunday when I couldn’t find a space to park Alex’s lovely grey Audi – yeah, I get to drive it – he’s always parking it where he shouldn’t and I have to go and move it; I can’t say it’s a chore, it’s a nice machine and I like that the fact that trusts me with it.

The racing hasn’t been intense, if it was then the ‘little teams’ would be wasted by now – tonight and tomorrow won’t be for the faint hearted, though. 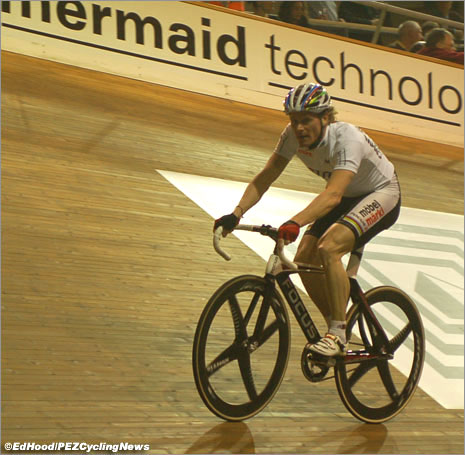 The great Bruno Risi hasn’t been so great so far – he has been sick, but soldiers on.

Stand out riders for me have been the Danes, but I’m biased I guess. Franco has looked good some nights, heavy legged on others; Bruno has been sick, so has Bartko and Jens-Erik Madsen; Stam doesn’t seem sparkling to me but his amigo, Peter Schep looks as classy as ever. The young Belgians, Kenny de Ketele and Tim Mertens look frisky, but they’re only apprentices and can’t win; not to mention the fact that Mertens couldn’t hold Michael Morkov’s wheel in a chase the other night.

My personal highlights of the six so far have been the nightly flying lap, which Alex and Michael have dominated, ‘Eye of the Tiger’ booms from the PA, the crowd is on it’s feet and 69 kph looks pretty damn spectacular. 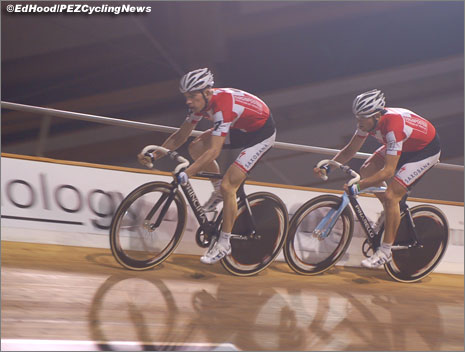 Don’t even try and mess with Alex and Michael in the Flying Lap.

Another has been the ‘balustrade’ sprint where the whole field rides in a string, sticking tight against the fence for eight laps before a two lap charge for the line. What’s special about this race is that the riders do a ‘routine’ as they ride round, hands off, hands high, ‘Superman’ position and generally playing to the crowd – the last time I worked here it was Frank Hoy who lead the sing to Dario G’s ‘Sunchyme.’ This year we have – all the way from Northern California – riding his fourth six with Garmin team mate Colby Pearce, Mr. Daniel Holloway. Daniel leads the string to the sound of ‘The Boss,’ and as ‘Born in the USA’ booms out, we get hands high, ‘Superman,’ plus ‘air guitar’ solos, singing into an imaginary microphone and clapping – his routine creates a terrific buzz in the hall and does his chances of future contracts no harm at all. 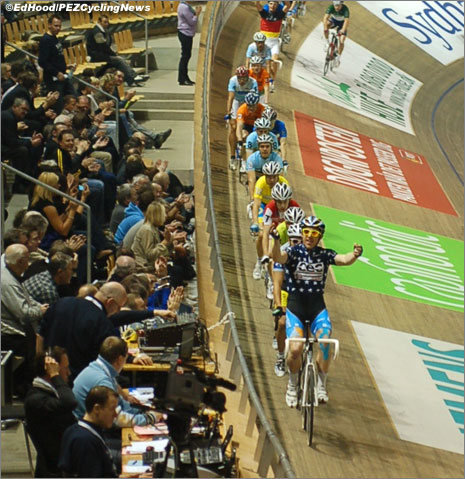 Holloway’s nickname isn’t Hollywood for nothing!

That’s the thing about the sixes; it’s about crowd pleasing, Holloway has that figured already, so does Argentinean Sebastian Donadio. The long haired man from Buenos Aires may be last in the classement, but that doesn’t matter when he sits down behind the Casio organ in the track centre and gives the crowd some Elton John numbers. Marvulli has it all; he’s good looking, fan friendly, fast and goes down to the finish straight to direct the Mexican waves for the flying lap. 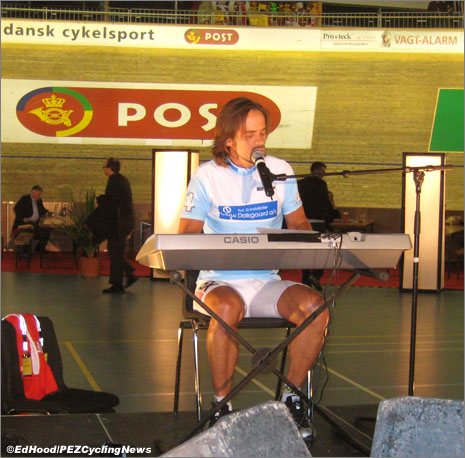 Sebastian Donado is handy on the mic and keys too!

A six is many things, a race, a night out, a show, but it’s also a social and business hub, and already we’ve had visits from the like of former world pursuit champion and Copenhagen six winner Hans Henrik Orsted and former Fleche Wallonne winner, Bo Hamburger. Tony Doyle has been showing a potential sponsor for the much mooted London six day what the sixes are all about (London sixes are a bit like unicorns; much discussed, seldom seen!) 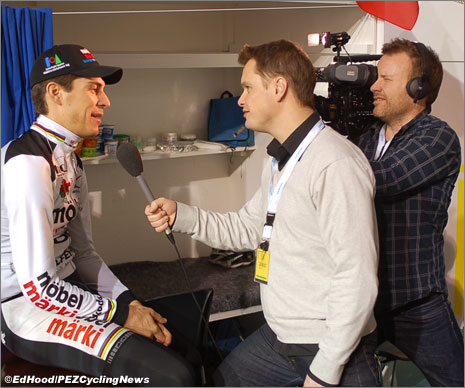 Marvelous certainly does have the entertainment side of the coin figured out – he can ride a bike pretty fast too.

On the subject of entertainment, the music at a six is crucial and this one has been great, particularly if you’re sad, grew up in the 70’s and love disco; Sylvester, Edwin Starr and Alcazar assault your ear drums at volumes way too high to be good for you – my ears ring as I lay in my hotel bed at night. 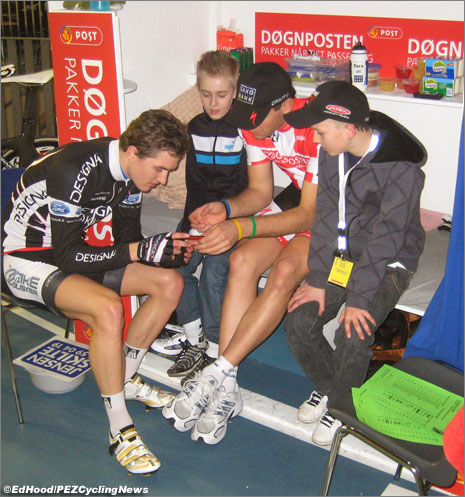 Access to the riders is unprecedented at the Sixes…this young fan has both Marc Hester and Alex Rasmussen hard at work trying to figure the damn thing out!

My own job has been going fine, once I remembered the hundred and one little things you need to know to ‘run’; only 20 mm of isotonic drink in the bottle for feeds during the race – so as it doesn’t splash out onto the track; but bottle three quarters full for thirsty riders when they come down after the chase; if one of your riders wins a race, trot round with their sponsors cap, a towel and a drink for the presentation on the finish line; start to tidy as soon as the final chase commences . . . . 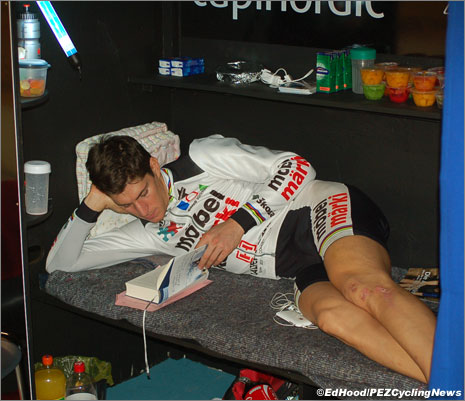 That reminds me – I have bottles to wash, I mustn’t wind-up the soigneur, better go.

These next two days will decide if we’ll see the names Morkov & Rasmussen painted on the advertising fence that runs around the top of the track – along with all the previous winners, Pez will try to transport you here for these final, crucial 48 hours.

Inside The Copenhagen Six: Dane Mania!