For someone who has achieved so much, but is still really just a kid, this was a hell of a way to shout: “I’m here and I’m pretty damn good!” Andy Schleck took his first big win and looked every lanky inch a super champion, putting well over a minute into the rest of the favorites at Liege-Bastogne-Liege. Here’s how he did it!

Yeah, it was a hell of a show from young Andy, who seemed to be riding the flats as fast as his chasers were going on the descents. It was as if he’d cracked some science fiction code and sussed out how to make time speed up. To win the young rider’s jersey at the Giro and Tour by the time you’re 22 is one thing. To win La Doyenne like this is a couple of steps beyond! 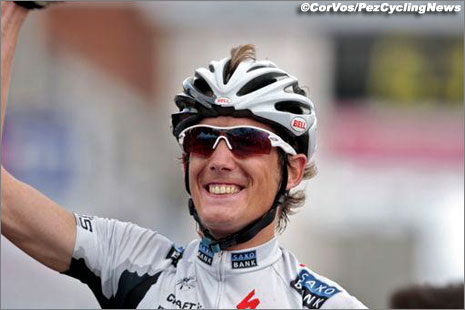 It had all looked pretty good for Philippe Gilbert – riding on home soil, the Silence-Lotto man was half-a-minute up on the field heading for the vicious Cфtes de la Roche aux Faucons with 20kms left. The reaction from Andy was phenomenal, hitting the climb and ripping across the gap before dropping the Belgian like a bad habit, and rocketing away to an arm-waving, fist-pumping victory celebration.

It was awesome stuff from a rider in full flow, and even though the names were all lined up behind him, they never seriously seemed to have a chance of pulling him in. SaxoBank were in full control and got the tactics nailed on the day.

Kolobnev, Kroon, Fuglsang and the Sorensens (Nicki and Chris Anker) were all either off the front or driving it at various points, and they made sure the chase never got going.

And we had the visual bonus of a Schleck/Riis/Schleck love-in at the finish … and I never thought I’d ever be typing that! 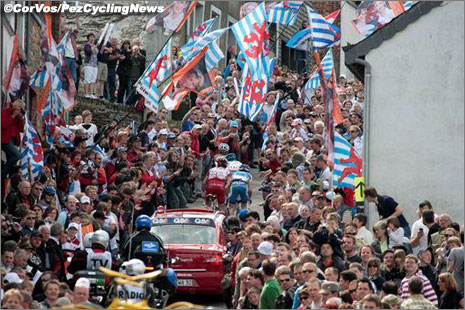 The break leads the way up the insanity that is the Cote de Saint Roch.

All in all, it was a fairly timid first 200kms, except for those in the break of the day.

In the first hour, things were kept tighter than a medieval virgin’s chastity belt with only Cervelo Test Team’s Marcel Wyss unwisely trying to ‘get away with it’ before getting hauled back into line.

Wyss was at it again not long after and joined Nico Sijmens (Cofidis) in following Cyril Gautier (BBox Bouyges Telecom) off the front after 80kms for a three-man ‘early break’ attempt. Hubert Dupont of Ag2r got across to make it a quartet.

Over the Cфte de Saint Roch, the upstarts had eight minutes, and the peloton relented enough to let the lead go out over eleven minutes. By the time the barons of the race were heading towards the Cфte de Wanne, they’d had enough of the miscreants’ behaviour and rapidly sliced the lead to a much more manageable 7’ 50”.

The Stockeu really hurt the break and by 70kms to go Liquigas were painting the front end of the peloton lime green and the break’s lead was down to 4’30”.

68 kms to go and Sijmen’s demonstrated the perfected art of the ‘empty bidon toss’ with the panache that only a continental pro can produce!

Jakob Fuglsang was riding like a maniac in the peloton, over the Cфte de Haute-Levйe causing pain and suffering at the back, with Kim Kirchen disappearing rapidly.

SaxoBank’s hard work put Chris Anker Sorensen off in a chase trio over the summit of the Cфte de la Vecquйe along with Linus Gerdemann (Milram) and QuickStep’s Dries Devenyns.

Hitting the last hour of the race, with 40 hard, hard k’s to the finish, and the original four still had half a minute on Sorensen/Devenyns/Gerdemann, who were dangling teasingly in front of Lampre leading the main field.

35kms to go and Wyss was dropped at the foot of La Redoute. The ‘originals’ crumbled one-by-one, and Gauthier wass the last to be picked off at the top.

SaxoBank were super busy and Kolobnev prompted the next move with Jose Serpa (Diquigiovanni). Karsten Kroon came over with Kreuziger (Liquigas) and a rejuvenated Hubert Dupont. 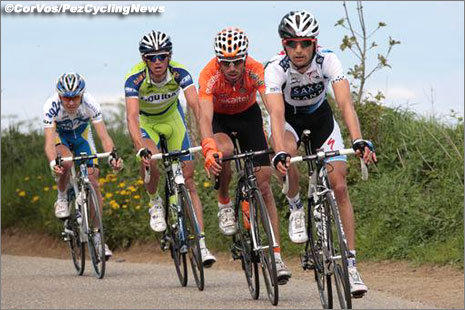 Karsten Kroon looked good again, and made up one of the essential finale moves to set up Schleck’s knockout.

Martinez (Euskaltel), Gesink (Rabobank) and Van den Broeck (Silence-Lotto) made it eight, before Philippe Gilbert rocketed straight past! Inspired by his home fans on La Redoute, it was a totally do-or-die effort …. and he’s a half-minute to the good in what feels like the blink of an eye.

There’s sort of a chase but it’s not exactly organised – Euskaltel, Saxobank, Milram and Lampre all represented speeding towards the Cфte de la Roche aux Faucons.

Nicki Sorensen is back doing his job on the front of the peloton with 20kms to go and they’re 45 seconds behind Gilbert who’s rocking up the penultimate climb.

Andy Schleck suddenly emerges through the chasing group and is off.

The Cфte de la Roche aux Faucons is a mofo of a climb! It’s Gilbert vs Andy Schleck vs the peloton. Schleck’s grimacing, blowing his cheeks, in the saddle, on the hoods, out of the saddle. Anything to make this hurt just a little less.

Over the top of this beast and Gilbert’s got …. not much left. Schleck’s done the damage. It’s about 20 seconds. Gilbert’s hustling the camera bike for a time gap, and he looks so desperate it’s like he’s trying to fence the results of a jewel heist!

Andy Schleck gets up to him with 18kms to go as Katusha’s Sergej Ivanov jumps off the front of the peloton in pursuit. Up front Schleck is solo.

16kms to go and young Andy’s got 25” on a big chasing group. All the names seem to be there – his big brother Frank, Valverde, Rebellin, Evans, Scarponi, Cunego, Gesink. 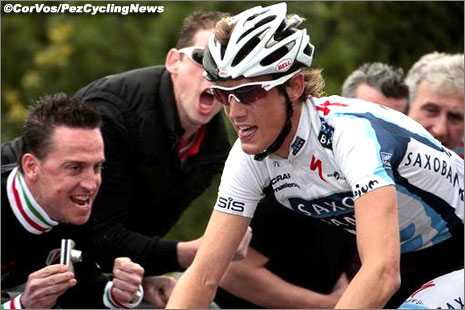 Andy’s doing a real number though and the gap just grows and grows … 43 seconds to go with just 13kms to the line.

11kms to go – 50”. Cervelo are trying to make something happen. There’s a chase group of about 18 but Kroon, Kolobnev and Frank Schleck are keeping things under control for SaxoBank.

9kms to go and it’s over a minute now!

7kms to go, and it’s the 1000 metre Cфte de Saint-Nicolas. Schleck hits it full bore and hammers up the slope. He’s got a minute-and-a-half now! Gasparotto desperately tries to tow the chasers back as he hits the bottom of the climb, but he promptly blows to pieces.

Cadel Evan’s tries something, but Rebellin’s onto him, with Cunego and Frank Schleck. Andy’s got 1′ 15” over the top and it’s inside 5kms to go. The chasers are too suspicious of each other to get it together and it’s all pretty ineffectual.

Frank gives the motorbike camera a big thumbs up! It’s in the bag! 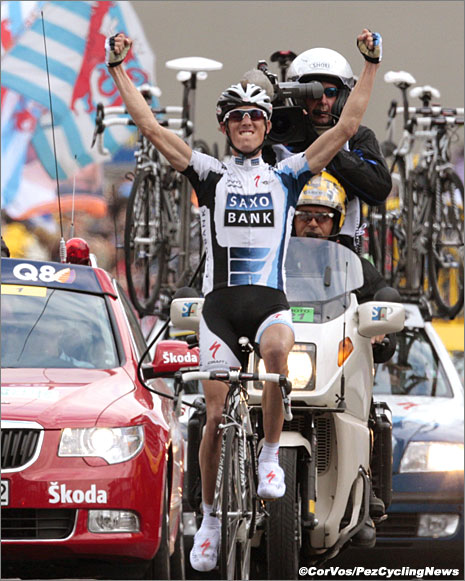 Under the red kite, Andy’s cruising and the chasers are splintering. Joaquin Rodrigueuz decides Valverde’s not a shoo-in for the podium and jumps away for second. Rebellin edges Gilbert for the final podium spot. 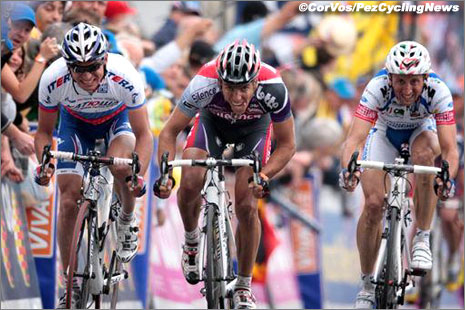 Rebellin managed to snatch the final step of the podium, whilst Gilbert netted yet another top 5 to finish up the Spring Classics.

A monumental win for Andy Schleck and … who knows? Maybe he’ll repeat this a few times over the next decade or so! Keep it PEZ for lots more good stuff!

Dan Fleeman: What’s La Fleche Like In The Flesh?