Now that we’ve got all the pesky background information taken care of, we can get straight to the meat: predictions. There’s nothing more fun ahead of a bike race than putting your weatherman hat on and seeing what you come up with when it’s all over. We have a pedigreed favorite on top, but a veritable army looking to usurp the King of Lombardia.

The King of Lombardia? I thought Damiano Cunego had a different nickname I hear you ask. Nope. Piccolo Principe? Lame. King sounds better. If Damiano Cunego manages to win this weekend, he should be given this nickname, officially, so we could do away with his crappy diminutive nicknames (that includes, the Kid). 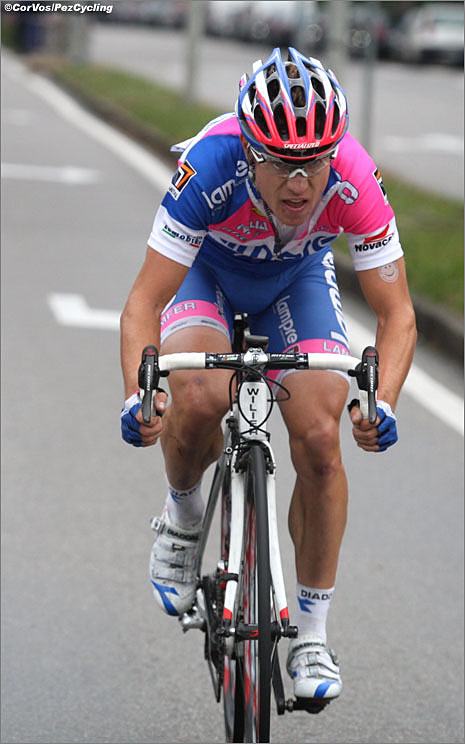 I don’t think Damiano Cunego has the best form of the favorites in the race right now, but I didn’t think that last year either. He really just seems to have an intangible connection with the race. There’s a lot to be said for that, and there’s a reason he has 5:1 odds to take the win on Saturday.

It won’t be easy though. This year, we have a banner squad of hopefuls looking to depose the King.

Namely, Philippe Gilbert. I don’t think we’ve seen a hot streak like Gilbert’s this season since Andre Greipel returned after injury and didn’t lose for weeks. They’re not even comparable though – when a rider like Gilbert wins three races in a row, you know things are clicking just right, and he’s on fire – he’s not winning in bunch sprints, rather, he’s showing himself the strongest at the right moment, then taking the win from a select group. 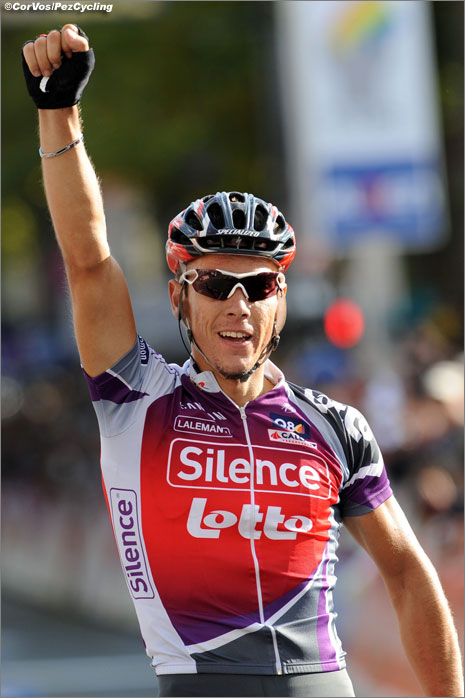 Right now, Gilbert can do pretty much everything, add to that the fact that he’s a nifty, agile bike-handler, what do you get? Cunego Usurper. He’s my pick for Saturday.

Philippe Gilbert’s teammate, Cadel Evans, isn’t going too badly these days either. He took that illustrious Worlds title a few weeks back, and has been on his own joy ride of form of late as well. He rode a stellar Emilia finale, but left his attack out of the chasing field a wee bit too late. Evans should win Lombardia at some point in his career, but it’s always going to be a tough one for him when anyone really quick is in the neighborhood. 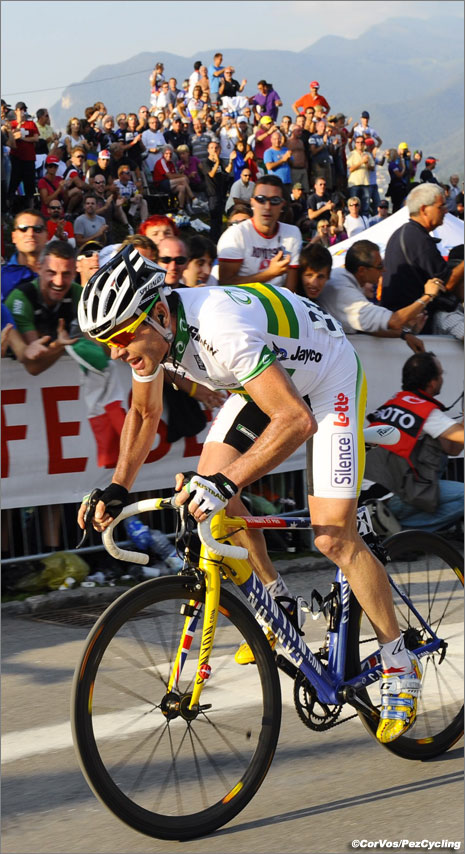 The flat finish along the Lago di Como is so different from the rest of the finale, yet obviously, so critical. A rider like Evans needs to make a move like Cunego or Bettini…or a move modeled after his own win in Mendrisio. There are two significant climbs in the final 15k. He has two big opportunities there. His rampant descending and time trial prowess will take care of the rest. More importantly, Gilbert and Evans are a beautiful 1-2 combo – they will form an aggressive, positive racing force. I think the win will go to Silence-Lotto on Saturday.

As soon as I say that, Filippo Pozzato pops into my mind. He’s not the first rider that comes to mind at Lombardia, but if Ballan can lead the way over the Madonna del Ghisallo climb and factor in the finale until his captain rides away to three-peat glory, well, I think Pippo is more than sage to say that he has a little more left to say in 2009. 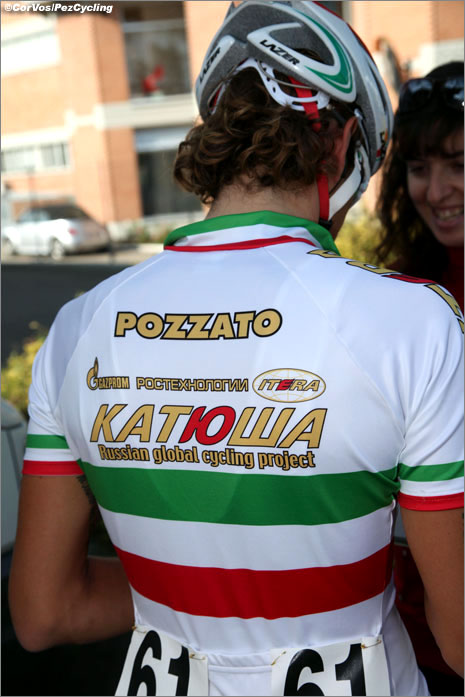 Like Gilbert and Evans, he’s also going well at the moment. If things go just right for Pippo, he’ll arrive to the finishing straight in a small group…and he’ll blast one of his Boonen beating sprints. Then again, Gilbert just did that. Advantage? Still Gilbert.

For once it seems, Joaquim Rodriguez will have full leadership of his squad. Like Cunego, he appears to be born for a race like Lombardia. He’s a quick, agile climber, he has Worlds podium finishing form, and he has the Ardennes credibility to boot. Second place at Liege-Bastogne-Liege is nothing to snort at. 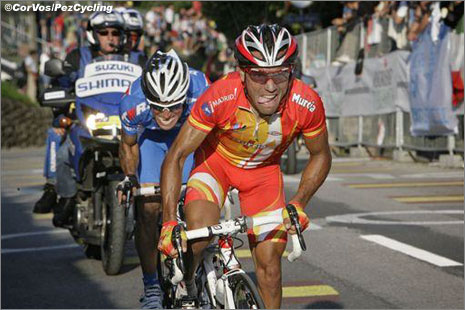 Lombardia would be perfect for Rodriguez if it finished uphill. He’s one of the best on the hilltop finishes, but alas, it isn’t. He’ll be a factor, but he won’t win.

If it were a few weeks ago, I think I’d favor Sammy Sanchez a little bit more, but it’s not. Sanchez is kind of a race-picking enigma to me. He can be counted on to win bike races, but he never seems to be a favorite. He’s a solid bike racer, but it always seems to be mildly surprising when he wins, yet not unexpected. Know what I mean? 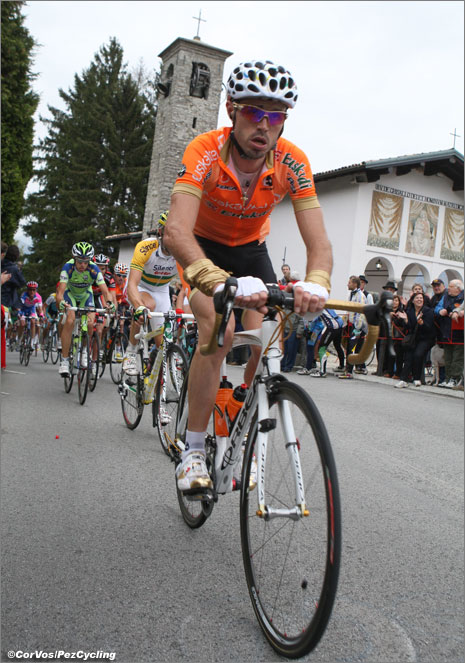 Like pretty much everyone else so far, he’s a great climber, a virtuoso descender, and a quick finisher. What more can you ask for on Saturday?

More of a favorite for me, is Paolo Bettini’s protege, Giovanni Visconti. Visconti has had a solid season on ISD. I’m interested to see where he goes for the future, but if he has any hopes of treading the great path of his mentor, he’d better start winning some great bike races – a task that he is more than capable of carrying out. 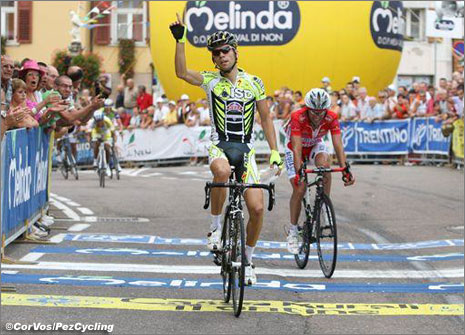 Visconti surely has the speed to win in the finish. If he were to come to the line in a group with all of the favorites, he’d have a fair shot at victory on the line. He proved his worth last season with 4th place when he took the veritable bunch sprint in Como. 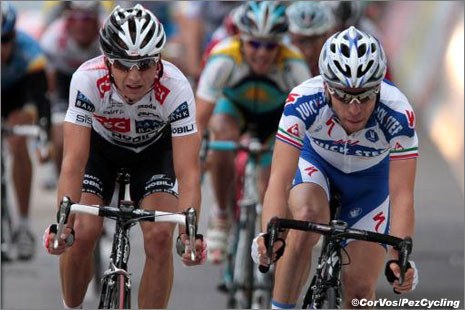 Second in that bunch sprint? Karsten Kroon. Karsten Kroon and his Saxo Bank squad will be powerful. Kroon appears to have a liking for Lombardia and seems to make it a tradition to go out on the attack in the latter part of the race. No one of them SaxoBankers will be an out and out favorite, but they have more than enough firepower in the team to pull off a coup, especially if Alexandre Kolobnev can pretend that the Giro di Lombardia is the World Championships. 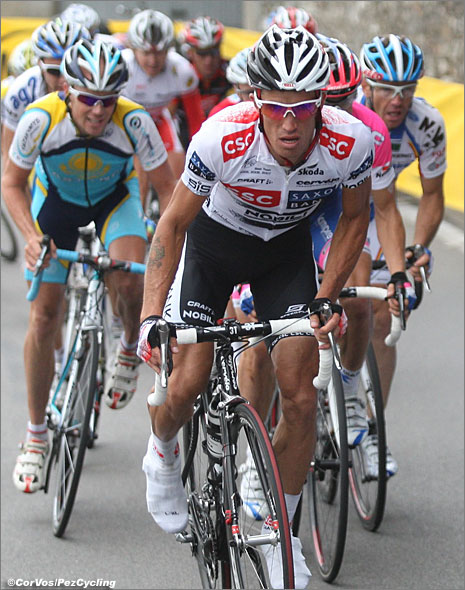 I’d love to give Robert Gesink favorite status, but I just don’t see how it’s possible for him to win. He’s in great form, but great form or not, this just isn’t his kind of bike race. If it finished uphill, he’d have a better chance, but even then, his chances would be slim considering that a real fastman will be a part of most likely everything. 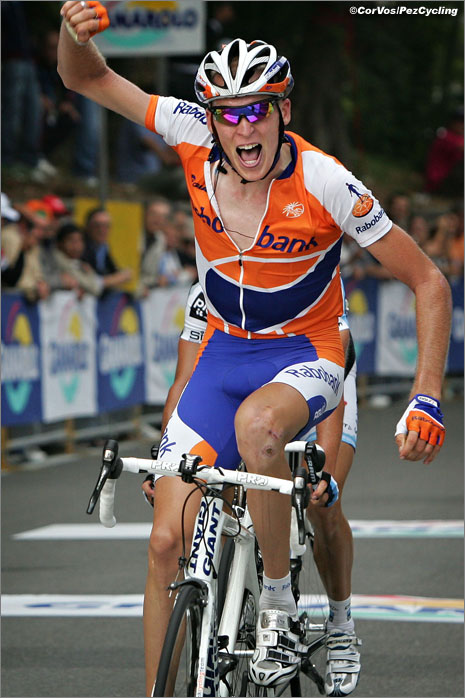 He’ll need to go it alone if he’s going to win. Most likely, he’ll make an elite selection and finish in the bottom half out of that. If he DOES make that selection though, he’d be an ideal candidate to pull a Stefan Schumacher at Amstel a few years back – the top favorites look at each other, Gesink rides away to La Foglie Morte glory.

Thomas Lovkvist is another rider in the Gesink camp. He’s strong at the moment and will have his chances in the finale, but he’ll need to be on the attack if he’s to win. 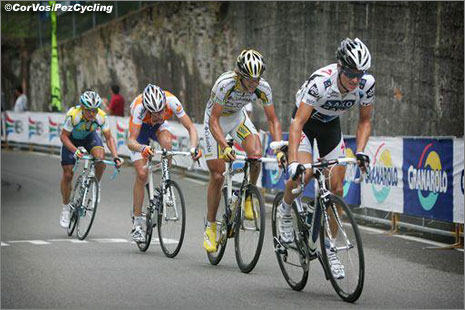 Speaking of attacking, I will guarantee attacking from one rider: Alexandre Vinokourov. I am groaning as I write this, but I just can’t help but enjoy Vino’s racing style. Every time he attacks and fails, he does a little more penance in my book. If he goes on attacking and failing for another season, he will be absolved. It’s just like Basso – every time he puts on that smiling grimace, rides really hard, and comes up short, I like him a little more. These former greats are still solid, but they’re more human now (I wonder why). 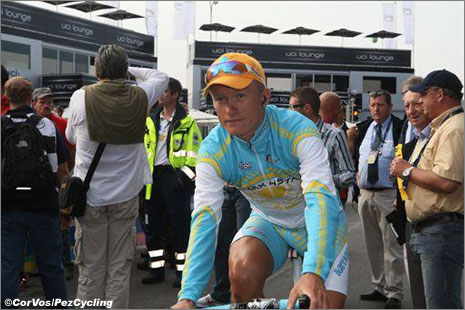 I can only speak for myself on this one, but as a fan, I have a soft spot for the fallen bike racers. They made their shot at the stars, came down with a mighty thud, but they’ve returned to (please oh please) do it right. They’re still fantastic, but they’re not the extraterrestrials of yesteryear. You can’t deny it, I can’t deny it – Alexandre Vinokourov is a thrilling rider because he never stops attacking. He will animate every race that he’s a part of. He will animate on Saturday.

Alessandro Ballan won’t get much of the headlines due to his Lombardia loving teammate, but he’s also a man for this course. If all eyes turn to Cunego, there won’t be any left to watch last year’s World Champ. Reports from Worlds say that Ballan was the strongest on the Italian team that day… 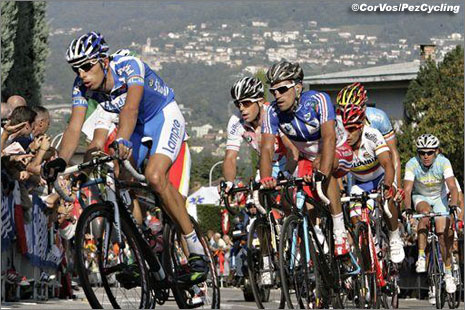 I feel obligated to include Chris Horner. Horner has has the luck from hell this year. He has shown positive brilliance when he’s not injured, but he has been injured for most of the year in one way or another. He has always ridden well at Lombardia – he initiated the winning move last year, but couldn’t hang with Cunego down the Civiglio. 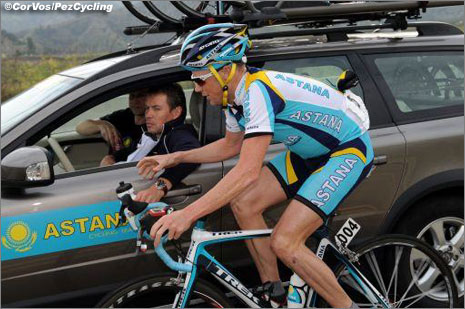 It will take the ride of a lifetime for Horner to win this year considering that he just returned from his latest injury, but hell, if anyone has done the time in 2009, it’s Horner. He’s my sentimental very dark horse for Saturday.

Ivan Basso? He doesn’t have a chance. I think the ‘former’ Basso could have won Lombardia with a jaw-dropping attack on the Civiglio, but the new, human Basso isn’t nearly that fast, and his descending will always be a weakness. The finale does not favor a rider with a weakness going downhill. 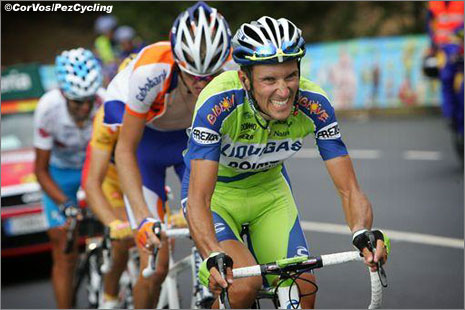 Still, I think the Basso we’ll see next year will be a good bit better than this year’s Basso. I’m not discounting him just yet.

Don’t Take My Word For It
Like I always say, the people at Unibet get paid to come up with good odds.