No point beating about the bush. How can there be suspense when Philippe Gilbert is in this sort of form? It was another tactical masterstroke from the Belgian, taking advantage of strong team work from Cadel Evans to snare his second Classic in just six days!!

Brilliant finish from the Belgian as he got away over the last summit of the day with demon descender Samuel Sanchez, and the twosome held off a star-studded chase to the line. 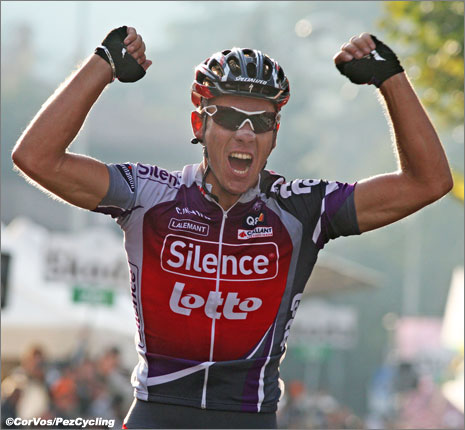 Gilbert looked like he was about to blow the sprint, leading it out then easing with just 50 metres to go as Sanchez came back, but he found one last effort to win by a bike length.

It was a cracking last 20 kms, and here’s how it went down …

One thing’s for sure, it won’t be Pippo Pozzato who’s feeling poorly. He still turned up at the start line in his rather natty civvies, though, to see the race off.

Inevitably, someone’s got to make a death-or-glory (not literally, for the first part!) break and the fab four doing the slippin’ away shuffle today were Irish ace Nicolas Roche of AG2R-La Mondiale, the veteran Marco Vйlo from Quick Step, Katusha’s Serguei Klimov and young Dutchman Reinier Honig (Vacansoleil), who finished fifth at the Giro del Piemonte on Thursday.

It shrinks even more, over the top of Valsassina where it’s three-and-a-half minutes, and even less as they make for Bellagio.

The Business End Of The Race
Onto the Ghisallo, on the hard climb to the cyclists’ chapel and Roche is closer to God than the rest – he’s ditched Velo first, then Honig and Klimov, but the peloton bears down and Vacansoleil have done a good amount of work. 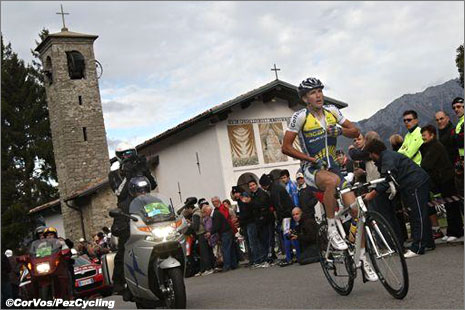 This summer’s hands down revelation, Johnny Hoogerland, continued his string of great rides in Lombardia on Saturday.

Their Vuelta revelation Johnny Hoogerland takes off with his team-mate Matteo Carrara. Off with them are Gustav Larsson (SaxoBank), Garmin-Slipstream’s Dan Martin, Mauro Santambrogio acting as policeman for his Lampre capo Damiano Cunego, and QuickStep’s Dries Devenyns.

Euskaltel, Acqua & Sapone and Rabobank are hammering it on the head of the field and Rabo’s Seb Langeveld performs a 9.9 face plant cornering going up the Civiglio! Bauke Mollema gives him a push once he gets his chain sorted. 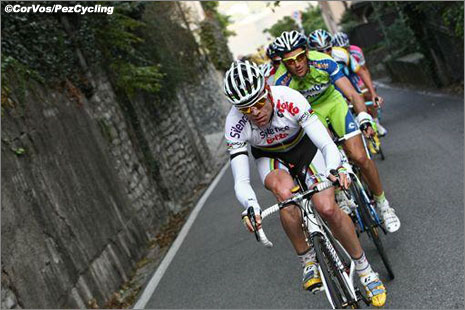 Next action is the rainbow jersey in full flow. Cadel Evans launches a monster attack up the right-hand side of the climb and it’s panic stations as the rest scramble for the wheel.

Over the top of the Civiglio, it’s Sammy Sanchez descending like a lunatic, stretching the field. Gilbert keeps a respectful distance behind.

The legendary Mario Cipollini, the sprint God who never came remotely close to winning a race like Lombardy, sits in the finish, dolled up like an off-duty rock star, watching the mayhem. 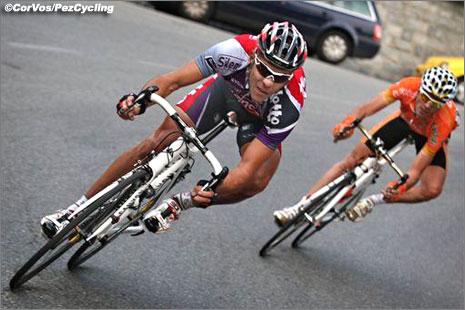 Sammy Sanchez is an amazing free fall descender, but Gilbert showed himself to be more than capable of matching the Olympic champ downhill.

Last year’s world champ Alessandro Ballan is chasing the current incumbent, Evans, as they descend. All the favorites – Sanchez, Evans, Cunego, Gilbert, Rodriguez – are in the mix, but it’s Larsson and Santambrogio who’ve come down the descent fastest and are clear.

Now Vino gets up to them, and there are twos and threes chasing all over the road. Evans is now towing Basso and Gilbert as the leaders fly back out of Como.

The Final Climb Fireworks
Onto the San Fermo Della Battaglia and there’s not much between the front trio and the chase. Fuglsang has replaced his SaxoBank team-mate Larsson and is piling it on … 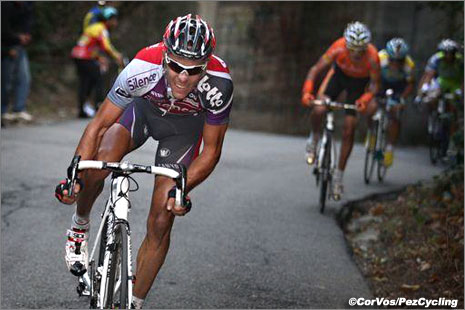 Six clicks to go, all together … for a few seconds as Gilbert goes! Hands on the drops, out of the saddle, total commitment as he corkscrews up the narrow climb. One man’s coming across and it’s Sammy Sanchez! 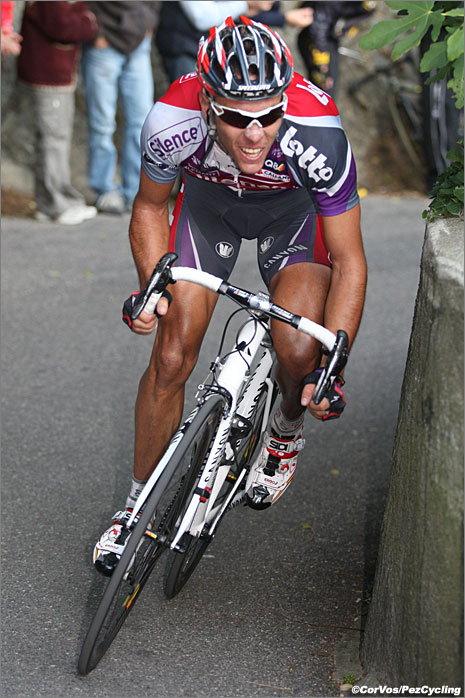 Onto the final descent, and it’s the dynamic duo versus the rest. Sanchez is cornering like Valentino Rossi in Moto GP, with Gilbert hanging in there.

Three kms left, Gilbert is on the front and it’s about eight seconds. 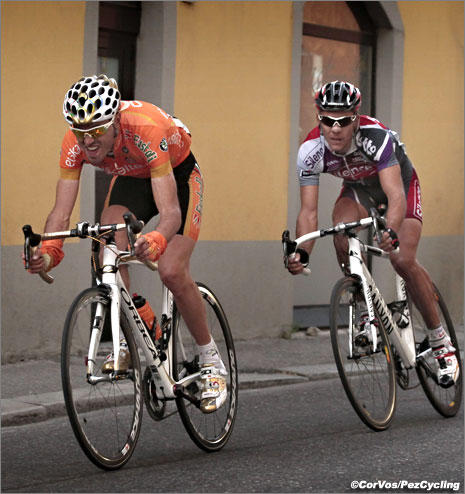 The duo cooperated well until the final kilometer – then it was all Gilbert on the front as Sanchez hoped to overthrow the fastest man on two wheels right now. 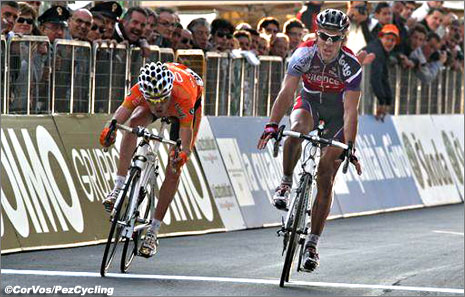 It wasn’t to be for Sanchez though. Philippe Gilbert took his first Monument today in Como.

Gilbert starts the sprint, going from 200 metres. He leads Sanchez out, pauses to look over his shoulder with 50 m to go then has to sprint again as Sanchez tries to pass him on the right! Gilbert summons one more big effort and just edges the Spaniard. 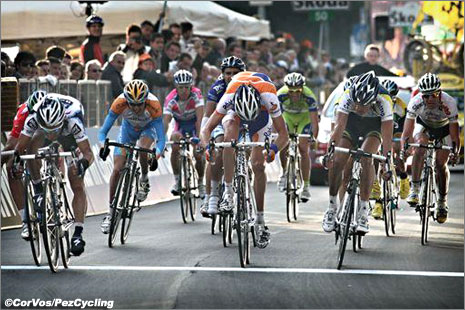 Sanchez gives him a handshake as they wheel to a halt, and Evans (10th) rolls over for a big hug with the new Lombardia hero.

Amazing stuff from Gilbert who now has four wins in his last four outings including two Classics! That’s Merckx-like domination, surely? Huge smile from Gilbert on the top step as he gets the trophy and flowers, and well-earned they were. 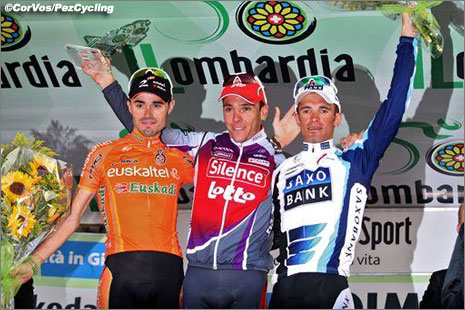 More to come on Pez! Don’t touch that dial.

PEZ Kit: Cool Down For Fall!