This is it, folks. The long, long road bike racing season will draw to an end this Saturday along the lakefront of Lago di Como. The Race Of The Falling Leaves rightly holds a place among the Monuments. Let’s take a closer look at the race, its history, its route, and what it might take to steal glory in Como Saturday afternoon.

The Giro di Lombardia is a PEZ-Favorite. Richard loves it, Ed loves it, Ale LOVES it, I most certainly love it, doesn’t everyone? It’s a great race. It’s an improbable race in that it inspires a certain amount of eagerness not often experienced this side of July. Why? It embodies everything in a bike race that we all love: hills, famous climbs, narrow roads, insane descents, beautiful scenery, water, colors, big names, thrilling finales, Italy, Monument, history…what more can you ask for? Ok, it could be even better if there was a cobbled climb in it, but you can’t fault every race for not being Flandrian.

A Race Of History
The Giro di Lombardia also has the honor of a great nickname: La Foglie Morte. There isn’t an exact translation into English, but we’ve come to know this race as The Race Of The Falling Leaves. The Five Monuments all seem to have a habit of being the happy benefactors of well-deserved nicknames: La Primavera, Vlaanderens Mooiste, l’Enfer Du Nord, La Doyenne – see what I mean? 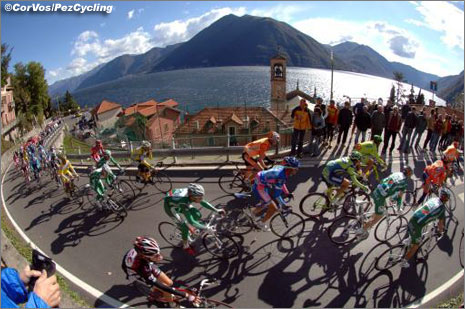 The Giro Di Lombardia turns 103 this year. In its 103 years, it has seen more than a few different start towns, finishing towns, and routes in general. The race began as Milano-Milano in 1905 and received its proper name two editions later, in 1907. Record man is all-time great, Fausto Coppi with an astonishing five wins. In second place at four wins is the former Giro record man, Alfredo Binda. 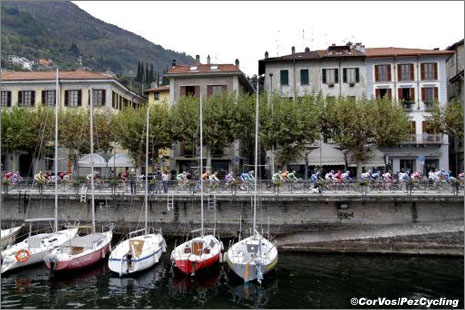 Damiano Cunego has the chance to tie Binda’s classic Lombardia mark with a win on Saturday, putting him one step closer to the untouchable Coppi. Il Piccolo Principe has enjoyed a fruitful relationship with the Giro di Lombardia, taking wins in 2004, 2007, and 2008. If ever a course was tailor made for a bike racer at birth, apparently this is it. Why?

Let’s Take A Closer Look
We all know Damiano Cunego as a rider who excels in the hills and mountains and can sprint with the best of them. Like his apparent carbon copy before him, sans the charisma and wild popularity, Paolo Bettini, Cunego loves his races to be hard and hilly; he’s one of the few that can descend with a rider like Sammy Sanchez, and when it comes to the final 200m, he only fears Alejandro Valverde. 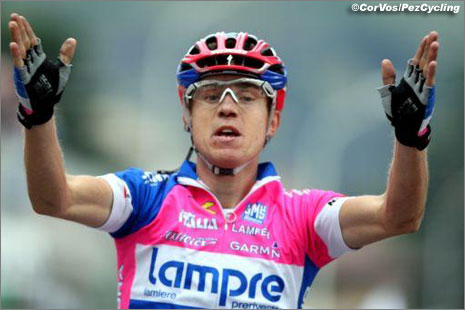 Lombardia involves every bit of that. From its start in 2008 Worlds town, Varese, the course steams toward Como over lumpy, hilly, early-break-forming terrain. It’s 25 kilometers from Varese to the first ascent of the day, the San Fermo della Battaglia. The San Fermo enjoys the privilege of being both the first and last climb of the day: the riders will run into this climb again in, oh, about 210 kilometers…and it’s going to hurt a lot more the second time. After a brief little sparring match with the first hill, the parade along the Lago di Como begins…and lasts until Argegno. 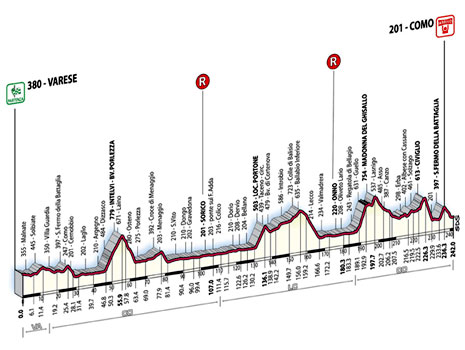 At this point, the early break will be well on its way, and some unfortunate team will be well into setting tempo. Last year, it was Silence-Lotto doing the honors on the front for Cadel Evans. That same setup could very likely repeat itself this weekend considering the favorite status of two Silence riders: World Champ Evans and Paris-Tours champ Gilbert. 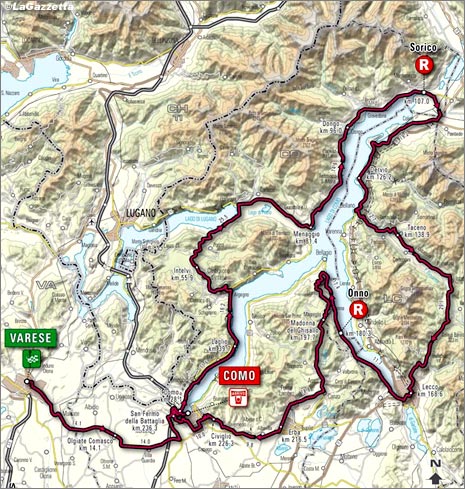 The climb from Argegno to Intelvi will most certainly not decide the race, but it’ll spell the end of the day for a number of riders, and at almost 9 kilometers, it’s a solid way to open up the real climbing for the day. From there, the technical descending part of the winner’s requirements will also be tested for the first time – the descent off the climb is narrow, technical, and hair-raising. When I rode it last year, I thought it was a pretty mean descent…then I rode the Civiglio. More on that in a tick. 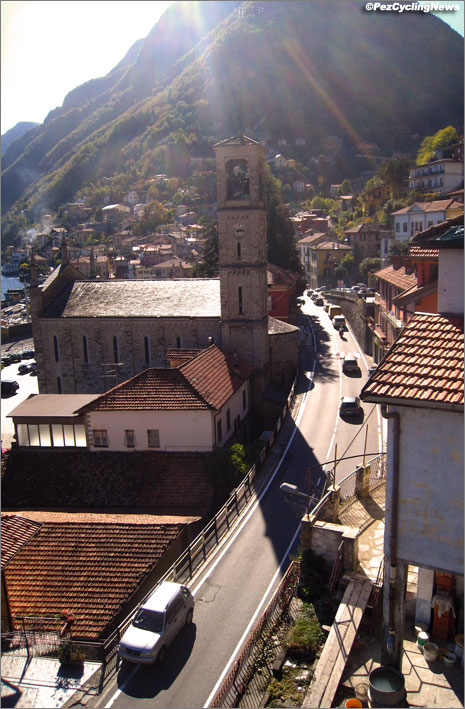 It’s with a heavy heart that you leave the warm happiness of Argegno and Lago di Como – it’s 9k and 500m to the top from here.

Once back to the happy shores of the great Lago, the race heads ever further away from Como until it gets to Sorico, the furthest point from home. Logically, after that, the race starts its homeward march, and as with all things Monumental, the race starts getting harder. Numerous climbs start popping up, the uphill meters abound, but nothing too crazy – this is all still warm-up. The real race doesn’t begin until about 50k to go with the legendary climb of the Madonna del Ghisallo. 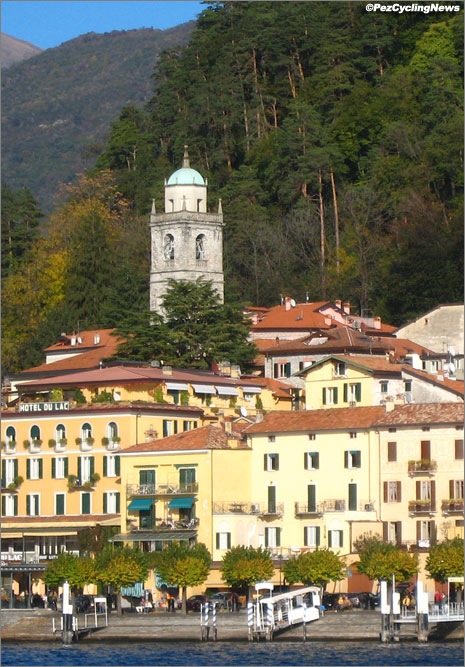 That Dangerous Word: Legendary
Really, the word is used way too much. Everything is legendary these days. I say BAH. If everything is so legendary, then why are there so few legends? Exactly. Except in this case: the climb of the Madonna del Ghisallo is the stuff of legend. 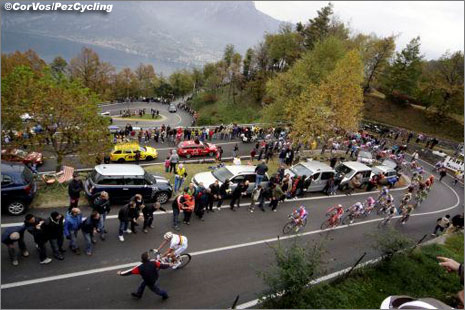 The upper slopes of the climb are littered with switchbacks.

It is a holy road that leads to a holy summit, a holy chapel, and a holy view. It’s damn near the most sacred place in all of bike racing…I guess that’s actually not too far-fetched to say: how many climbs do YOU know that have a chapel dedicated to the bici? Anyhow, by itself that would be pretty cool, but the climb is a doozy – especially when you consider it comes at around the 180k mark with more than a few thousand meters of climbing already. The stats? 9k, 500 meters or so of vertical gain, a good chunk of that in the first part. 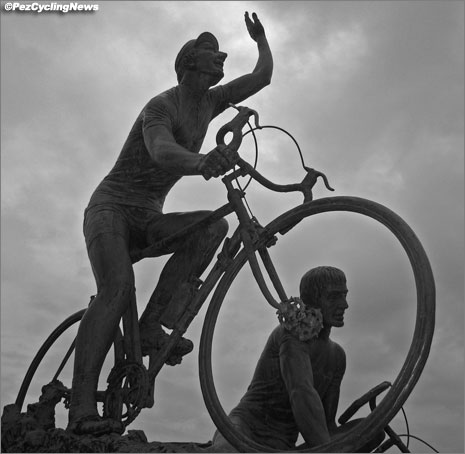 The climb plays an interesting role in the race – some years it is influential and plays a big part in the proceedings, some years it doesn’t (2008 for instance). It takes some serious swinging to wrench free on the slopes of the Ghisallo. The biggest deterrent for racers looking to win? There’s still a fairly long way to go from the top. There’s no real reason to pull out your trusty six-shooter on the Ghisallo. Well, if you wanted to bask in the warm glow of eternal glory and legend, then sure, yeah, attack away (Gilberto Simoni likes this), but if you want to win the bike race…better wait for the Civiglio.

The descent from the top is the opposite of technical. There’s nary a turn. Even Ashley could get down this one without her glasses – and that’s saying a lot. More importantly, It’s about 30k from the chapel to the top of the real race decider… 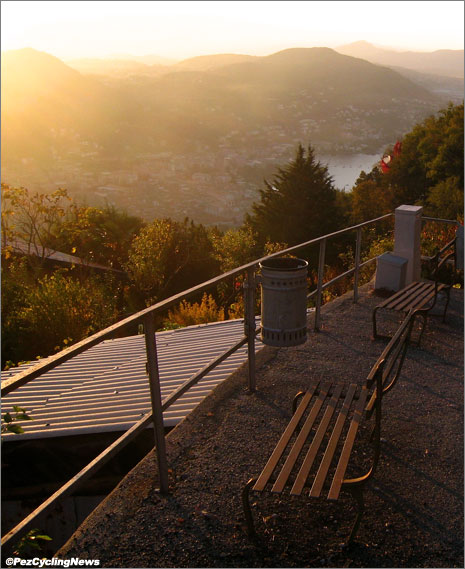 It’s all downhill to Como from the top of the Civiglio. The question is how fast can you get down? And can you keep both wheels on the road?

The Civiglio: Note To Self – Win Bike Race Here
The Civiglio is less than half as long as the deified Madonna del Ghisallo. It’s not that crazy of a climb either. It’s 4k, gains 200m, never pops over 10%, and it has a few switchbacks – basically, it’s the ugly great grandson of a Goddess. Yet, the Civiglio will most likely decide the race on Saturday – first on the way up, then more explicitly on the way down. 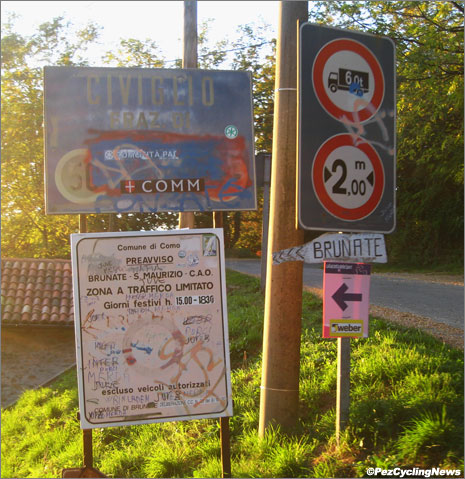 Oh sweet, yeah, I made the winning break. That’s all well and good, but now we start the fun part.

Last year, the winning break was initiated by Chris Horner, but it was Damiano Cunego’s virtuoso descent, which won him the race. Indeed, this descent must be seen to be believed. I still don’t believe it, and I’ve seen it, so I don’t know where that leaves us in regards to the cliche. Basically, I’ve never seen anything like it. 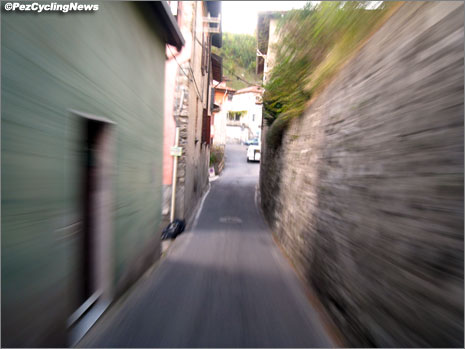 This is the actual descent of the Civiglio. I’m not making this up.

It’s heaven for Sammy Sanchez or Cunego, it’s hell for anyone who has neural pathways that transmit feelings of fear, or rather, anyone with any common sense. The road is barely wider than a golf path, it’s steep as hell, and lord knows it ain’t straight. That would make it hard enough on its own, except for all of those blind turns and switchbacks. It’s hair raising if you’re on sedatives. It’s crap in your pants descending at its best. 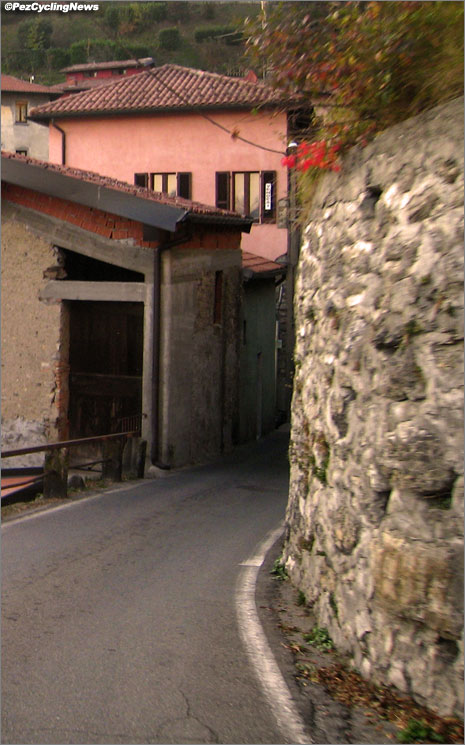 So you’re in Como, you survived the Civiglio – on to the finish line? Nope. Ride through Como and revisit that climb from earlier, the San Fermo. The San Fermo, like the Civiglio is on the short side, 3k, and like the Civiglio, includes a descent straight, or rather, crooked, from hell. It’s technical, it’s fast, it’s narrow, it’s the kissing cousin of the nightmare from across town. It’s another perfect pairing: you always have to be super strong to get over any climb, but at Lombardia, you have to be equally as strong technically for the descent. Cunego seems to prefer the Civiglio for his moves – he has gotten away twice on it: once with Riccardo Ricco, the other, last year, solo. Paolo Bettini, however, used the San Fermo as his departure point. 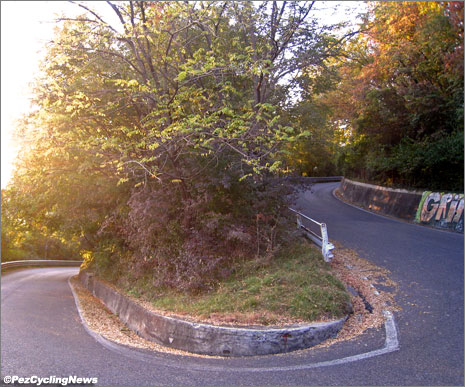 The switchbacks are holy terrors.

Cunego’s win last year owed much to the Civiglio, but he held his advantage and added on over the San Fermo as well. The two climbs together are a devastating combination. The formula is pretty simple – make the selection up the hill, drop the selection on the downhill (x2), ride really hard the final few kilometers to glory. Count out 1,2,3 fingers to signify three wins as you cross the line and call it a successful season.

The only question is whether that will work in 2009. If it weren’t for Cunego’s dazzling Lombardia genetics, there wasn’t too much separating solo exploit from…bunch finish? A rather large group arrived to the line just over half a minute behind Cunego last year with Giovanni Visconti taking the honors. Of course, they were beat home by Jani Brajkovic and Rigoberto Uran as well, but you see my point – the course is difficult, but it’s not a foregone conclusion that a solo rider or even a small group will ride off into the wealthy Como sunset.

Consider this: last year’s Giro di Lombardia was run off at a jaw-dropping 43 kph average.

Up Next!
PEZ takes a closer look at the riders in with a shot at victory Saturday afternoon in Como!