Hell’s teeth! What a finish! We might not have had the attack-fests of previous years but for tension and emotion, we could hardly have got a better Milano-San Remo. It all came down to an elite sprint for the 100th victory in La Primavera … and here’s how the race was won!

Mark Cavendish’s Milano-San Remo record reads … ridden one, won one!! The Manx flier took the win by little more than a tyre from Heinrich Haussler after a blistering final 300 metres.

Haussler rocketed off the front of the bunch and it looked in the bag for the German/Aussie as he opened daylight of about 10 metres with three or four phenomenal pedal strokes down the left hand side. 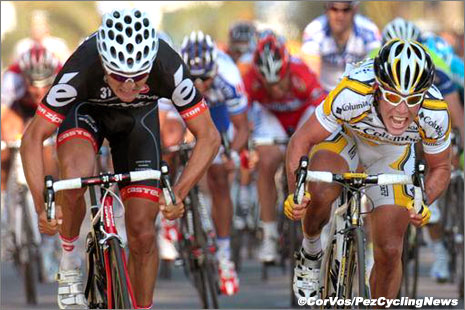 Cav was the only rider who could go after him and he overhauled Haussler with the bike throw. The only rider to win La Classicissima at a younger age was Eddy Merckx; now I’m not saying Cavendish is going to do what King Eddy did with his career, but it’s a pretty amazing statistic.

With no QuickStep, Liquigas or LPR involved there, they tried to keep a lid on things, riding steady to peg the lead at a maximum of a whisker over five minutes. 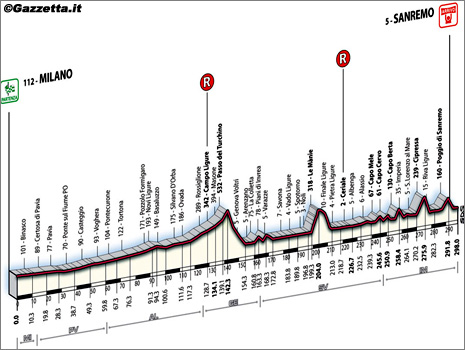 Over the Turchino Pass at half-distance the lead was down, but the break was still rolling nicely. By La Manie, the lead was down under three minutes, then under two minutes … with Astana en masse at the head of affairs. Maybe Lance Armstrong was fancying his chances at the most sensational of Euro comebacks?

La Manie might not seriously affect the overall outcome coming so far from the finish, but it hurts the legs. The break went to pieces as Le Mevel and Cheula turned up the gas; Krivtsov and Ignatiev caught them, opening up a minute on their former buddies with 100 kms to go.

There was something of a kiss-and-make up session as Eisel, Belkov, Klostergaard, Turgot and Tjalingii got back on. 70kms to go and they’ve got 2’ 45” on the field.

Over the Capo Mele with 45kms to go and it’s as you were. 31kms to go: the peloton streams through small coastal towns and the red tiles on the roofs glow in the spring sunshine. Ag2r, Columbia and Barloworld are prominent on the front.

25 kms to go and the break has finally surrendered. It’s Gruppo Compatto. Michele Scarponi, the Tirreno-Adriatico revelation strings things out from the front, with Stefano Garzelli straining right behind. Rebellin looks super smooth.

Unfortunately for Garzelli, he is running out of help fast as four of his team-mates launch what looks like a backwards TTT off the Coda del Gruppo.

22kms to go and Scarponi’s efforts are paying off as a group of about 35 pulls away from the field. LPR is frantically riding for Petacchi, and Armstrong is there with them.

20kms to go and we’re pouring off the Cipressa. Cavendish is getting a lot of chatter from the Italian TV commentators. The Brit has made the front group and looks like he can go the distance with Hincapie by his side.

The lead group has broken up totally with 15kms to go. The front 40 or so have about 40 seconds on another big group, and about 1’ 15” over the main field. Things are getting very, very twitchy.

Caisse d’Epargne and Columbia are to the fore in the first group followed by the menacing yet very cool all black kit of Cervelo.

10kms to go: FDJ mass at the front as we stomp onto the Poggio …. here we go!

Chavanel is onto the front to work for QuickStep buddies Boonen and Davis. Cavendish is spinning his way up very nicely. Julian Dean is there for Garmin-Slipstream, and the fans are on the roofs of the roadside houses!

8kms to go and QuickStep are still on the front. Pozzato is right in there for the Katusha team. Chavanel’s got his hands draped over the bars … incredible strength to do this at 290kms ridden!

Rebellin blasts off … panic stations as Garzelli scrambles for the wheel. Pozzato counters right away and its all getting desperate! The gaps stretch and strain and suddenly Pozzato and Rebellin are going clear over the top of the Poggio with Nibali more or less in contact.

6kms to go! It’s time to be fearless and the rest of the grouplets it all hang out by catching the leaders. All together with 4.5 kms to go snaking down single file.

3kms to go: Cavendish, Bennati, Petacchi Haussler and Hushovd are all there. It’s going to be a firefight to the finish. 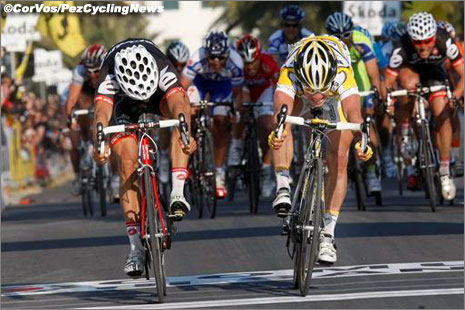 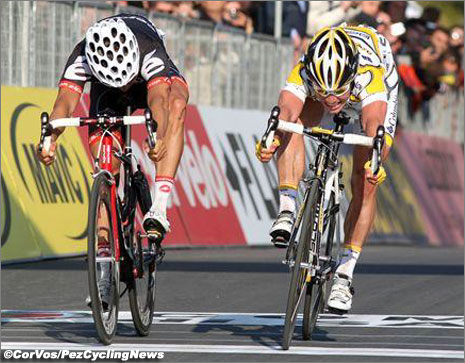 Hincapie is towing Cavendish into position and it all starts to bunch up as the road flattens.

Luis Leon Snachez goes for it with 2kms to go but can’t get clear, as Di Luca is working all out for Petacchi.

Ultimo chilometro and its totally frantic. My heart beat is thumping just trying to imagine what it’s like in that front group. No time for mistakes now. Hincapie hammers it on the front. Cavendish is fourth wheel round the last big curve.

Haussler jumps and rips out a gap … but its an absolutely blinding finish from Cavendish. If the race had been five metres shorter, though, Haussler would have been waving the flowers from the top of the podium. 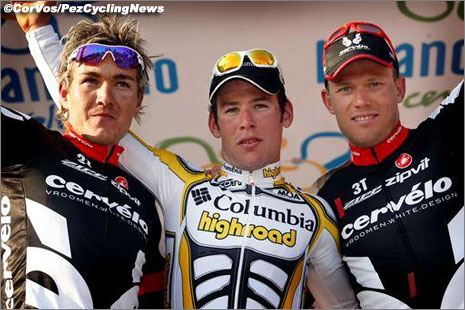 Haussler didn’t get it, but 2 out of 3 on the podium for Cervelo ain’t bad!

At the finish, Rai TV’s Alessandra Di Stefano had a quick chat with a tearful Columbia consultant, Mr Erik Zabel!: “It is the first time I see you crying!”
Zabel: “Yes, because it was too emotional today when Mark was still in the front group and he did a perfect sprint. We are so happy.

In my eyes, Mark did a super performance, extraordinary. I told him all my experience, I tried to tell him about the tricks. He died several times on the Cipresa and the Poggio!”

You can’t get a much better critique than from the guy who won this race four times himself.

A slightly stunned Cavendish himself said: “It’s the biggest day of my life. It’s so amazing. I didn’t expect it so much … George helped me at the finish. He put me in the best position in the last 500 metres. I was quite surprised to see him [Haussler] go. I was lucky I got him on the line!” 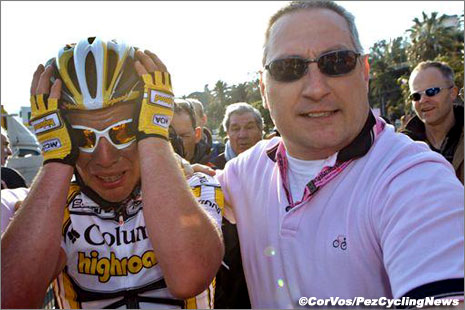 Keep it Pez … we’ve got lots more great stuff on the way. Matt, Ed, Martin and Ale are on site, so stay tuned for their adventures!