The 100th Edition of Milan San Remo is today. The final team meetings are over and the riders know their job for the day. At 9:00am this morning, all that remained for the riders to do was roll to the sign-on and run the gauntlet of spectators, autograph hounds and the four-pronged, PEZ San Remo Attack: If Ed doesn’t get you, Matt, Ale or Martin will.

As the team busses rolled in alongside Milan’s Castello Sforzesco, the crowds moved in for what would be a lengthy wait before the riders ventured out into the sunny, but very cool spring morning.

Team Garmin-Slipstream had just finished up an excellent week’s work at Tirreno-Adriatico and Paris Nice, and sports director Matt White was confident the squad could put on a good show for the year’s first Classic. 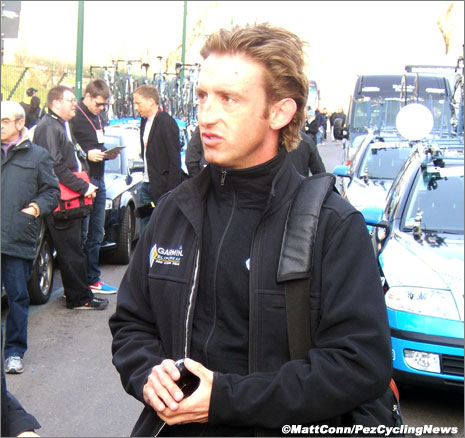 “I think it will be quite a big group sprint. It’s going to be aggressive as always and this year I think even more so than previous years, so I think it will be a group sprint. We’ve got a good team and we have a couple of options. If it’s a slower San Remo we have some good options. If it’s a faster San Remo, obviously we’ve got Tyler [Farrar] and Julian [Dean] and also we’ve got riders climbing very well. We’ll just see how it goes.” 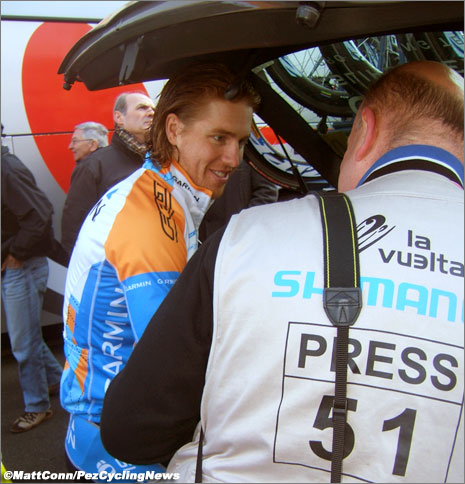 Ed gets in a few words with one of the favorites for the day: Tyler Farrar.

Another Squad who have had excellent result in the lead-up to Milan San Remo is Caisse D’Epargne, however their DS, Neil Stephens conceded that they are a squad better known for their stage race efforts and not amongst the big favourites for today.

“Last Saturday we had a great day taking two wins on the same day and two race leads. I guess we are more known as a stage race team and the one day races aren’t really our forte. We’ve got guys going well but we’re not the absolute favourites for the day. We’re going to lay our cards out and see what happens. If it does or doesn’t come down to a sprint we can still have an each way bet. If it does, we’ve got Jose Joaquin Rojas. He’s coming off an injury, but if it is a sprint finish, he’s pretty quick as well.”

Stephens says he was surprised that the race came to a sprint last year, but at Milan San Remo, you just never know. 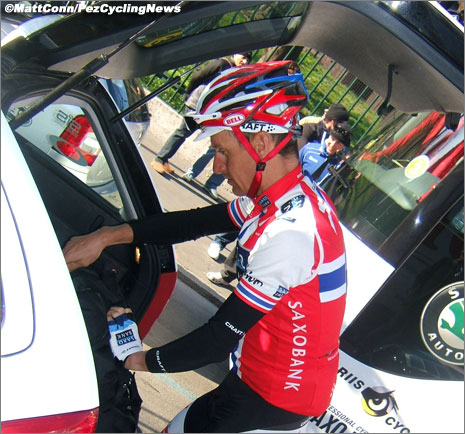 Kurt-Asle Arvesen gets ready for a long, long day.

Last year, Fabian Cancellara showed once again that being the strongest in the final 5km can be better than being the fastest in the final 500m and “stole” (if you believe the Italian press, anyway) the race from under the sprinters noses. This year Saxo Bank are without their defending champ and so the squad will be changing tactics.

Norwegian Champ, Kurt –Asle Arvesen: We’ll try and keep as many guys as we can fresh for the final, and then we’ll try a few tactics then. I think if we are going to win this year, we’ve got to do like last year and go away in smaller groups. We have Matti [Breschel] and Stuart [O’Grady] as our best riders for that I think.” 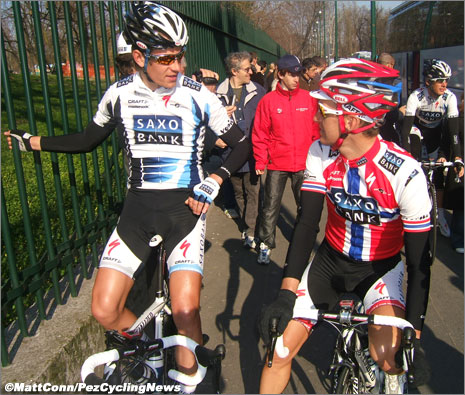 SaxoBank will have a number of cards to play today.

Stuart O’Grady, who has been listed by many as one of the favourites due to his ability to attack from a large group or successfully sprint from a small one, was happy with his preparation leading into the event, saying that he had been working really hard on his preparation, but “flying under the radar” in terms of showing himself in the early season events.

“Fabian’s absence has completely changed the approach to the race. Last year. I didn’t even finish the race and then this year you’ve got to try and switch on to trying to win it again. It’s a big difference psychologically, but I think we’ve got a really well prepared team.”

Stuey O’Grady update: O’Grady had to abandon 30k into the race after crashing.

One of the new boys on the ProTour block is Franзaise des Jeux’s Wes Sulzberger and after coming out of Tirreno Adriatico with good form, Milan San Remo is his debut ‘Classic’, which will be followed by the Tour of Flanders and Paris Roubaix. 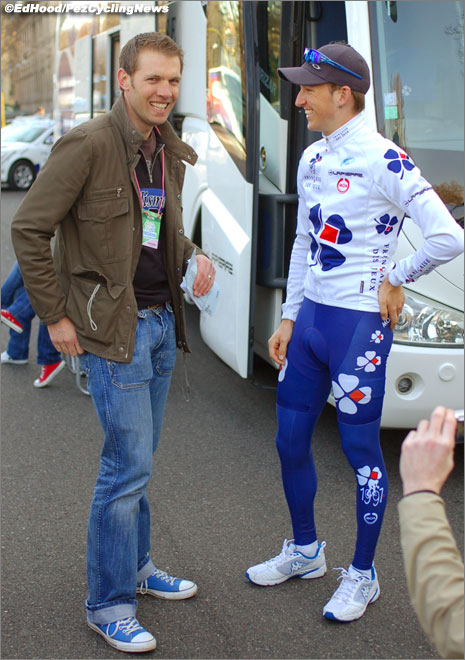 Wes Sulzberger and Matt Conn have a little pre-race chat.

“Tirreno went well and my job today is to stay around Benoit [Vaugrenard] and if he needs any help, to help him. He’s the TT champion of France, so obviously he’s got a bit of ‘go’ in him. If a gap opens around Benoit, I have to close it. If Benoit stops for a leak, I stop for a leak.

“I’m really hoping to get to be there at the finish today. We did Tirreno and the second last stage of 235k was a good warm-up for this, so I’ll see how I go.” 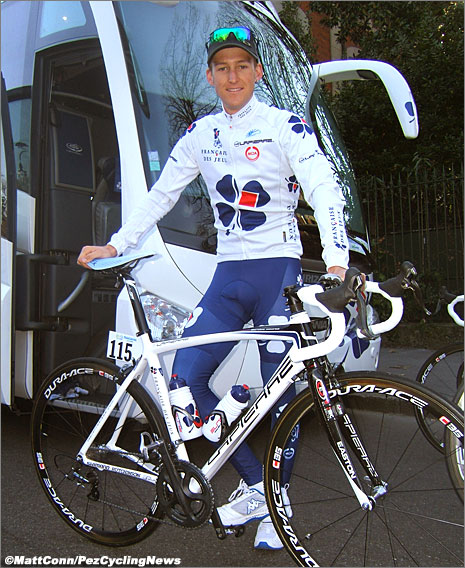 Away from the ProTour ranks, but one of the most competitive squads of the early season is the Cervйlo Test Team.

With Thor Hushovd their man for the sprint and Heinrich Haussler one of the names being mentioned as a good outside bet, the team tactic is to make sure that both are in contention for the finale. British duo, Jez Hunt and Roger Hammond gave PEZ their perspective on how the race would be run and won. 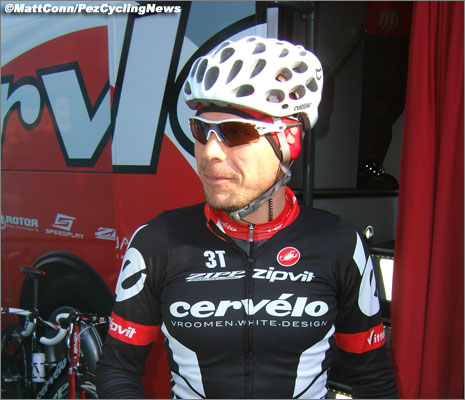 Jez Hunt, “We’ve got the two fastest sprinters, so we’re looking to keep it together. The climb of La Manie just saps the legs, but as long as you’re going OK it shouldn’t be a problem. At 100km to go it won’t change the face of the race, but it will wear things down for the end.”

Roger Hammond: “My role today is just to help out Thor. It’s one of those races where you can’t really predict what’s going to happen, so you just make it up as you go along. Even at 300km, it’s still a nervous race at the start. The last few years I’ve ridden it it’s been fast at the start and then it just got faster, faster and faster until the finish.” 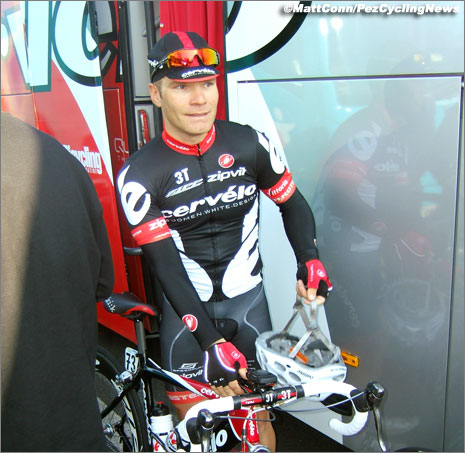 Getting good access at the start is always a hit and miss affair, but thanks to Lance Armstrong and the crush of media and fans that waited outside the Astana bus and then followed him to and from the sign on, there were a few other big names that were virtually left in peace to go about their business and were happy to give a few words to PEZ.

Robbie McEwen was just in front of Armstrong at the sign on and as he rolled away gave his thoughts on La Manie and how it would affect the sprinters this year.

“I want to get to San Remo in the first group, but it won’t be easy. This year there seems to be a lot of sprinters going really good and a lot of climbers going really good, so its going to be tough. Like last year, San Remo was made really tough by the new climb La Manie, so you’ve just gotta hang on” 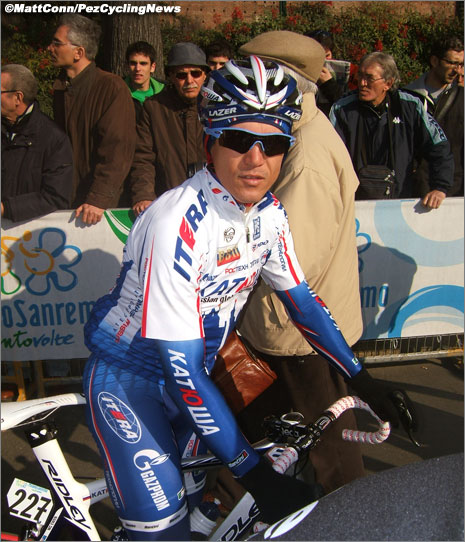 Robbie McEwen has big hopes, as always, for a win in Sanremo.

“Yeah it does make a difference. Like last year, the plan for the climbers is to go hard up that, split the bunch, make the sprinters chase. That takes a bit of the spring out of your legs and makes each successive climb harder after that. That makes a difference on the Poggio. It’s not a hard climb in itself, but after 300k, the more climbs you put before it, the harder it makes it.

“Petacchi’s was going well at Milan San Remo. He’s actually climbing really, really well, also Bennati and also Boonen. They’re probably the three sprinters at Tirreno who were going uphill the best and also I’ve seen that Heinrich Haussler is going super. These are the guys I’ve got to try and hang with and then when guys like Rebellin or even Lance are attacking around the Poggio, I’ve just gotta hang in! Of course, we’ve got Pozzato in our team who can also get away and get a good gap so he’s also one of the favourites.”

On the other side of the Armstrong Crush, former world champ Tom Boonen. We asked him about Le Manie and would it trouble him?

“No, it effects everybody. Last year we passed the climb with only about 30 riders and then they were with 5, but if the wind was a little bit more to our advantage, we would have made it to the final. I think the group with the sprinters only got back maybe 30k’s later. But without the wind, maybe today it will be a different race.” 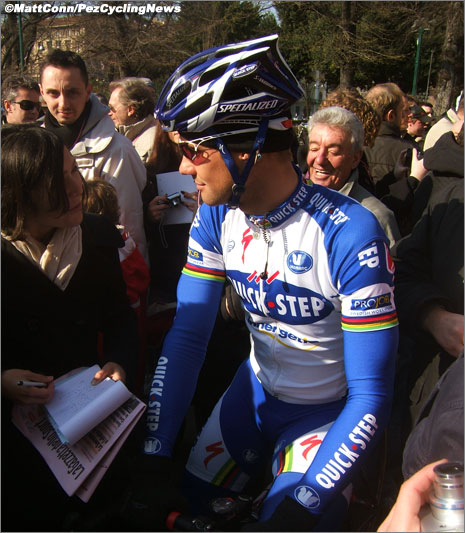 Tom Boonen was pretty quiet at Tirreno-Adriatico, but he’s 100% for today.

So as the whistles blew and the riders started to roll off into the morning sun, there was just enough time for the PEZ crew to grab final coffee before Martin and Ed dropped me back at the Milan train station before hitting the road for their trip to the Poggio and the finish to see just how well the predications and team tactics work out. 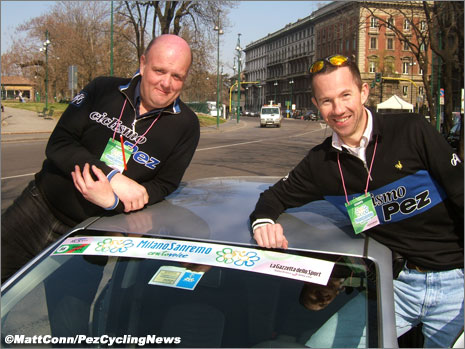 We’ll be hearing much more from these two later on today.

Keep it tuned to PEZ as we bring you the full coverage of race action, top PeloPics and roadside interludes of the 100th edition of Milano San Remo