It all happens so fast, on the day; autostrada, sign-on, satnavs, pictures, maps, notes, ferries, more pictures, TV, BlackBerry, wi-fi, editing, captioning, SEND – when did we last eat? But the morning after, there’s time to reflect, think about the fact that you were part of history for the day.

Up to date statistics first, after The 103e Giro di Lombardia:

The first stop as we headed out of Como for Bergamo and the world’s second worst airport – Beauvais stands alone as a campionissimo of all that’s bad about air travel – was the news stand for La Gazzetta Sportiva, as it’s called on Sundays. 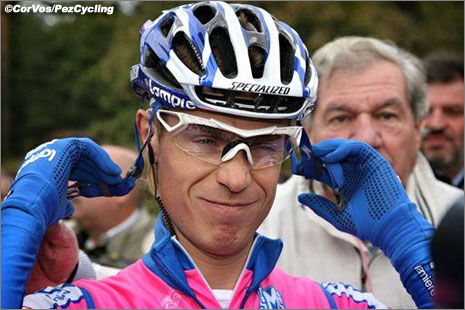 Cunego’s strong Vuelta promised much, but yielded little in the end.

Despite the fact that there were – without exaggeration – hundreds of ‘club’ riders streaming past in the opposite direction, the cover of the pink paper had no mention at all of the Classic of the Falling Leaves. Manchester United were there, but no mention of Philippe Gilbert. If Cunego had won, it would have been different – the Belgian’s pictures grace pages 28 and 29, though. The first Italian finisher was Luca Paolini of Acqua & Sapone – one of Italy’s “nearly” men, with good placings at San Remo to his name, too.

The Gazzetta develops the theme of Italy’s “close, but no cigar” 2009:

*Di Luca was, of course, DQ-ed for drugs offences; Rebellin’s 3rd at Liege and Fleche win have question marks hanging over them too, given his failed test at Beijing. Perhaps that’s why there so many fewer folks on the Ghisallo in 2009 than 2007?

A combination of public disenchantment with favourites failing to deliver – Cunego came out of the Vuelta with two stage wins, great shape and the ‘hot favourite’ tag for Mendrisio and Lombardia – and frustration with the drugs scandals, which seem to go on and on.

Like us, perhaps they thought that the Ricco/Piepoli chapter ended the book, but Rebellin, Di Luca and Bosisio proved us wrong. The aficionados may stream out of Como on their Colnagos, Pinarellos, Cervelos and Times headed for the Intelvi and Ghisallo, but Joe Public is tired of seeing false results. Not the best of years for Italian cycling, then. But I’m not being negative, it was a great race and an epic finalи. 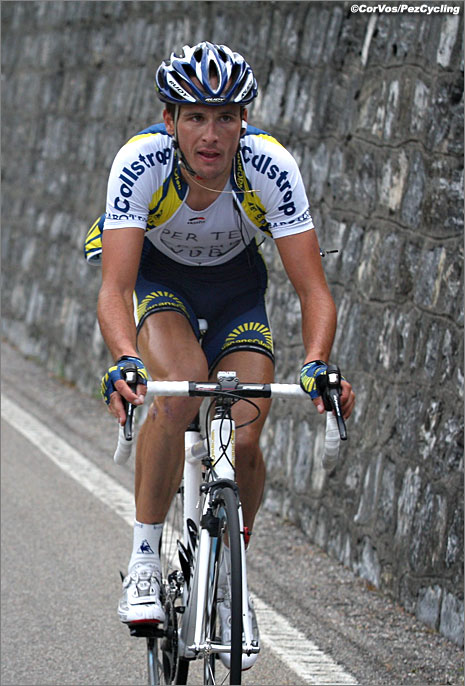 When we spoke to Johnny Hoogerland before the start, he said he was, “going to wait for the explosion on the Ghisallo,” but it was the Dutchman who actually did the detonating. After the Vuelta, where he turned a corner, and the Worlds, where he was one of the men of the race – albeit he let himself get swept away in the excitement – he’s a ‘big rider.’ It will be interesting to see him in the Northern Classics, next spring. 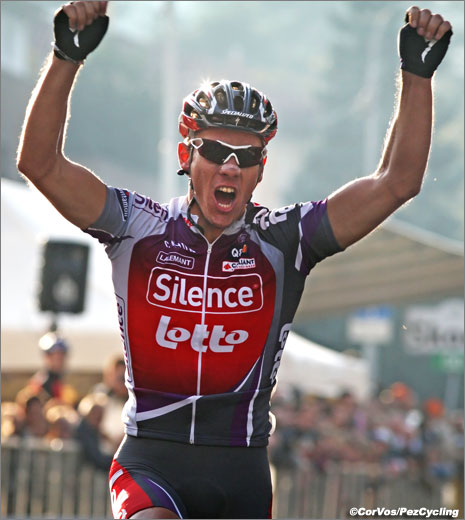 Gilbert? there’s not much to add to the superlatives that are flying around; he may only have managed his first win of the season on the penultimate stage of the Giro, but these last two weeks have been Merckx-like in his domination.

Along with Evans’ Vuelta podium and World’s win, Silence-Lotto’s season has gone from obscurity to shining brilliance in a matter of weeks. Gilbert’s win though, is the first Belgian triumph in Lombardy since Fons De Wolf won in 1980; in between times, the last time one of his compatriots even made the podium, was Axel Merckx in 1996. A good Lombardy for Belgium, then. 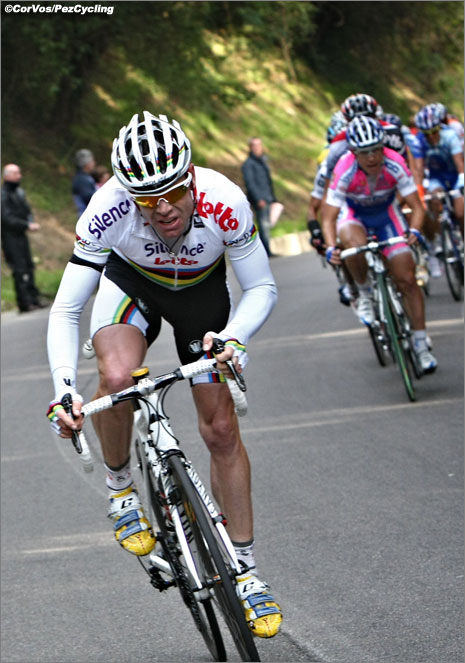 Continuing with the Silence-Lotto accolades, Cadel Evans’ selfless work for Gilbert was a joy to watch, the rainbow jersey playing the perfect team mate – respect. 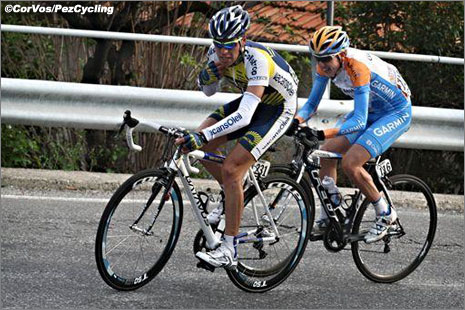 Dan Martin impressed; when we spoke to team mate Timmy Duggan last week, he told us that the Irishman was motivated to do well. He rode himself to his limits in the break and still had enough left to grab a top ten – it bodes well for next year. 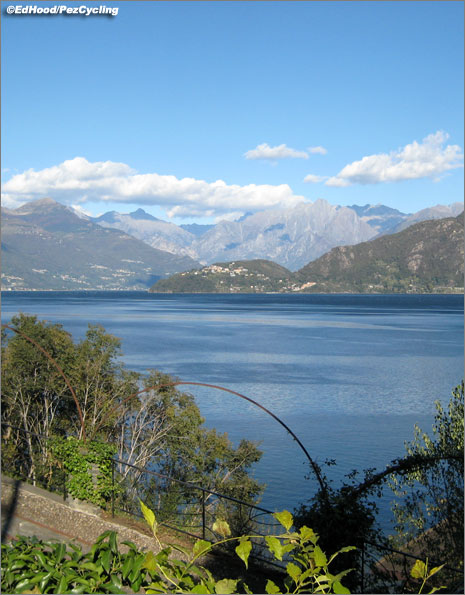 But the biggest star is the race itself; the early percorso out of Varese may look like the dйpart of some dour north of France slog, but come Como, it’s a different world. 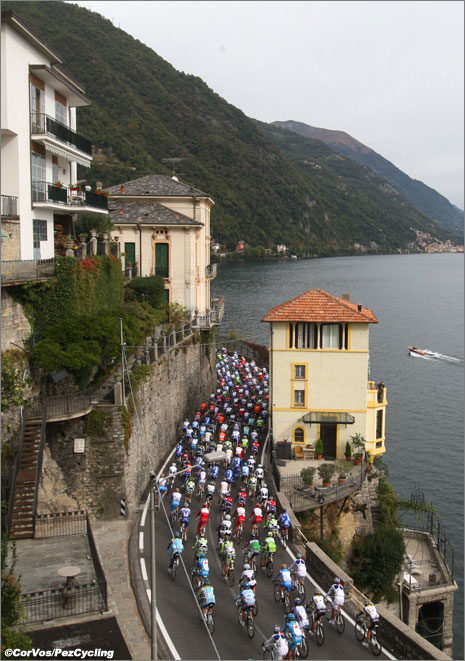 The huge three pointed star that is Lago di Como snuggles into forested mountains that rear sheer from its banks. Villages squeeze themselves into the narrow strip beside the lake, or cling desperately to the folds of the mountains. 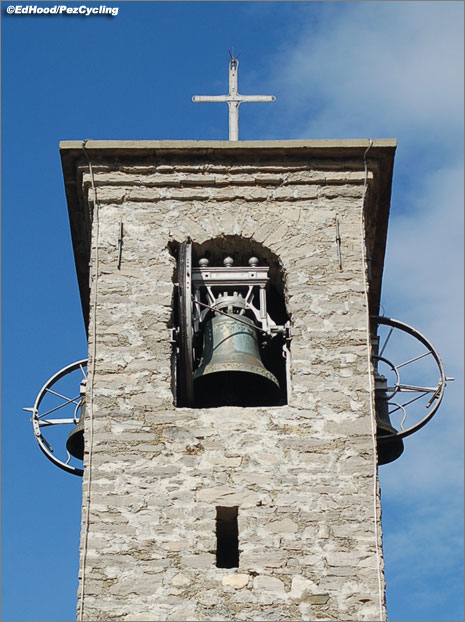 Campaniles rise from every village, grey against the pastel of the houses. The necklace of road squiggles, rises and falls to link the jewels of the villages – beautiful, but driving here is not for the faint hearted. 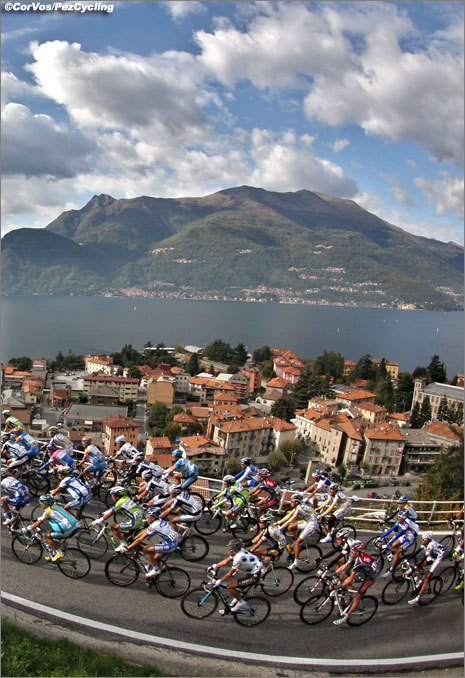 Friendly locals, who’ll gladly offer you a glass of wine and chunk of bread from their road side picnic at the Giro, become macho maniacs behind the wheel of their beat up Alfa or Lancia. 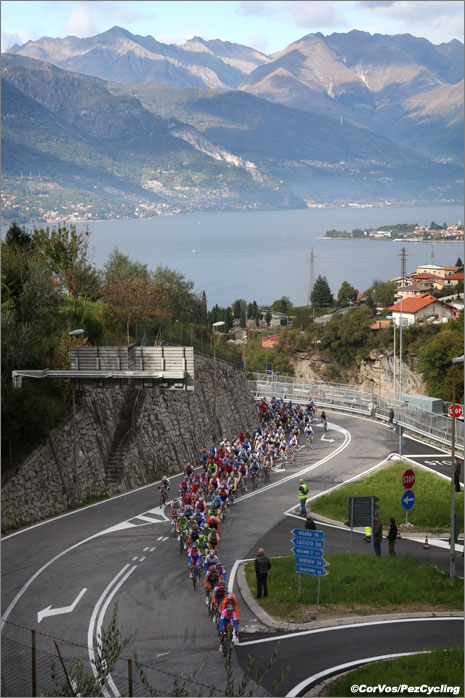 Our ferry trip from Menaggio to Bellagio – necessitated by Lago di Como’s total dominance of the local geography – was a high light; Bellagio sits at the tip of the peninsula which thrusts into the lake from the south and the views from out on the water were magical. 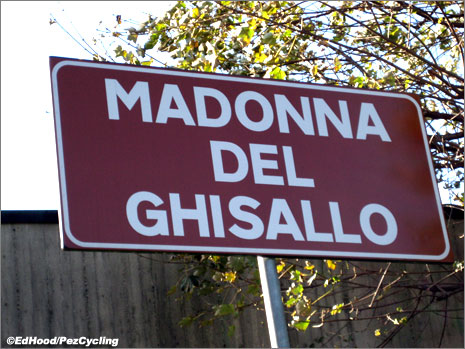 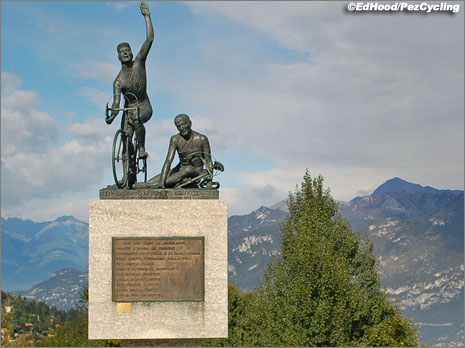 But the views from the summit of the Ghisallo are simply stunning – all the way north, up the lake towards Sorico; right down the lake’s eastern bank to Lecco and all around, spiky mountain ranges, rising grey and imposing beyond. 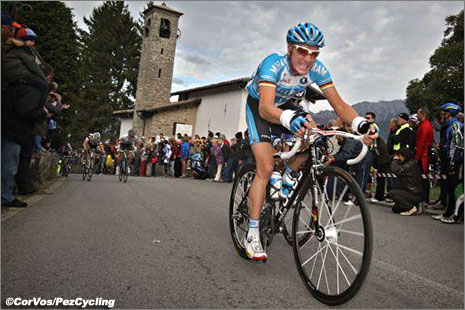 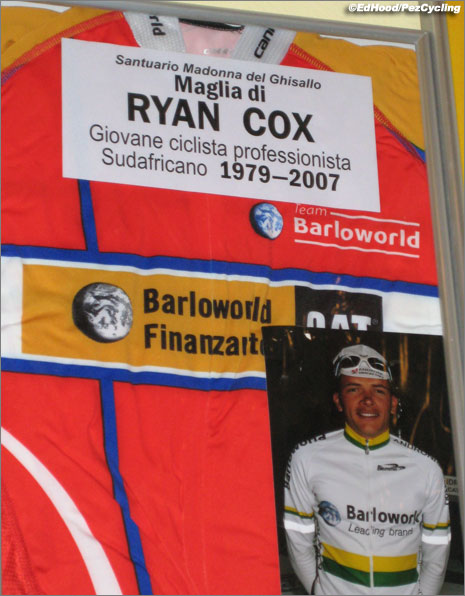 The chapel is at its best after the race has passed, quiet, still and a place to reflect on young men snatched away before we had seen the best of them – Fabio Casartelli and Ryan Cox among them. During the race it’s pushy, noisy and the tatty ‘icon’ stand at the door strikes me as disrespectful. 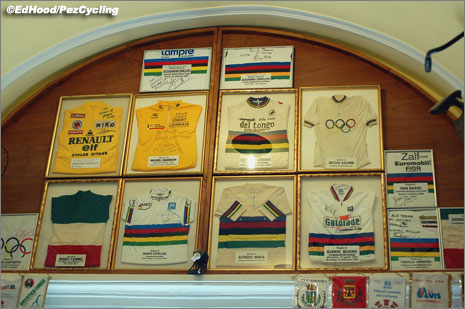 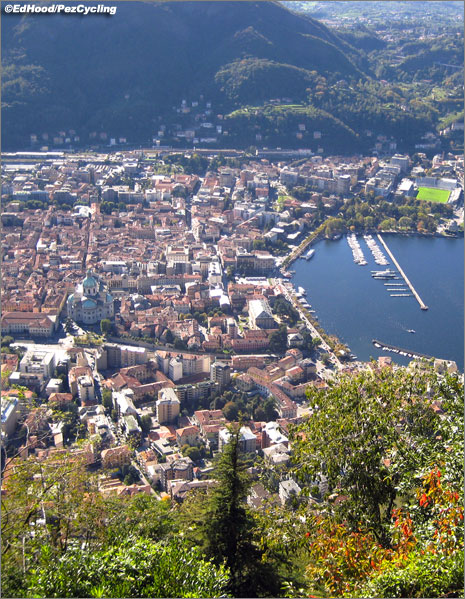 The setting for the finish in Como is how a great race should be brought to a close. By the water side with marvelous vistas across the marina to the lake, mountains and the funiculare. Liege-Bastogne-Liege finishes outside a retail park!

Great riders, great race, great scenery – there’s not much more to ask for.

Ciao, ciao – soon be the Primavera !