Philippe Gilbert (Lotto) took his second consecutive Paris-Tours victory on Sunday afternoon with a superbly executed sprint victory over Tom Boonen (QuickStep) and Borut Bozic (Vacansoleil). The result may indicate a blanket finish, but in fact the three fast men had slipped the peloton in the closing ten kilometres over the undulations that punctuate the race’s finale.

The three powerhouses worked well together, there was no foxing or stalling – even though they had room to do so – and it looked like Boonen’s race as he occupied second wheel position coming to the line. But it was the skinny figure of Gilbert who jumped first, from third spot, swerving left and going for home like a whippet. 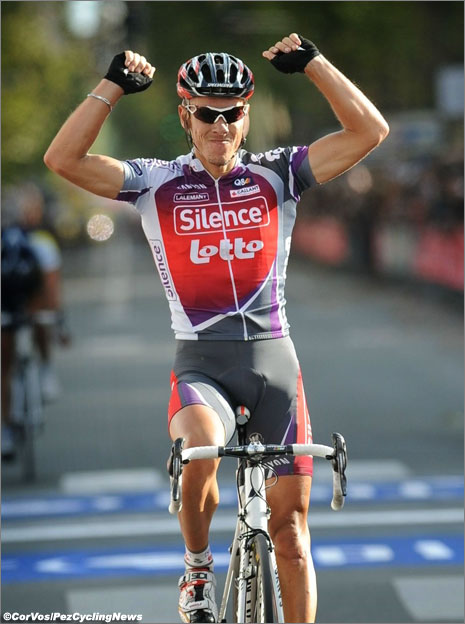 Philippe Gilbert proved that you don’t have to be Mark Cavendish or Tyler Farrar to beat two of the world’s best sprinters, Boonen and Bozic – you just need to time it right.

Boonen played the poker game, hesitating and thinking Bozic would take him up, but the Slovenian was spent and Boonen had to come from way back. Despite sailing past Gilbert after the line – his finish speed was much higher – Boonen’s timing was off and it was Gilbert, looking cool as a cucumber, who saluted the crowd. Let’s just hope that Tom hasn’t hurt his hand – that was some punch he gave those handlebars! 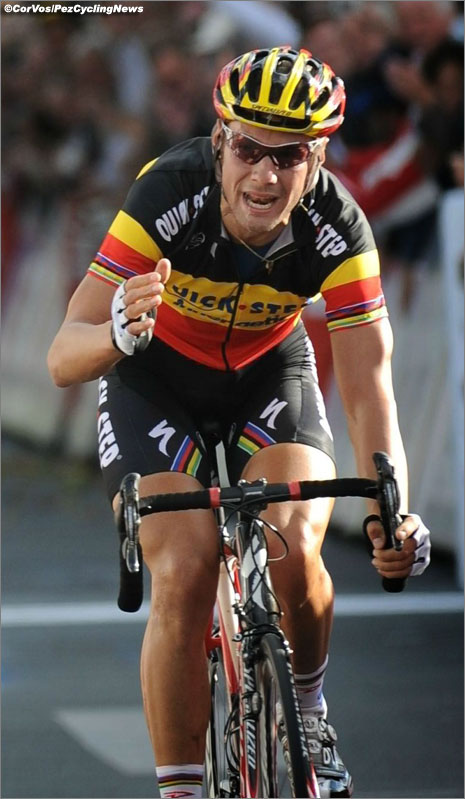 Boonen rocketed up to Gilbert, but the line came sooner, and the win was Gilbert’s. It was a perfect move by Gilbert and a frustrating opportunity lost by Boonen.

Pippo Pozzato (Katyusha) was fourth, in ‘no man’s land’ whilst ‘Golden Oldie’ Oscar Freire (Rabobank) took the bunch – or should that be ‘survivors’ – sprint from Francesco Gavazzi (Lampre).

They stayed away for almost the whole day with a maximum advantage of around seven minutes; until in the always decisive last hour where the sprinters teams began to marshal – prominent were deadly rivals, QuickStep and Lotto.

QuickStep And Lotto Unite
Their united front was just that – a ‘front,’ the QuickStep agenda was all about the last kilometre – Boonen and Davis. Lotto’s thoughts were further out, however; the cotes de L’Epan, du Pont Volant and du Petit Pas d’Ane in the last 10 kilometres – where Gilbert would dump the nitro in the carbs and try for the gap.

Inside the last half hour the break began to disintegrate as the gap dipped under the half minute; some cracked, some attacked to try and escape the inevitable – but squabbling and dithering had set in and the horse looked dead.

Garmin were playing poker, with no one up front for Tyler Farrar; whilst Columbia’s 3 to 1 race favourite, Greipel was out – felled in a crash.

With the break’s dead wood trimmed and six ahead now, they had stabilised the gap at around 25 seconds, the indecision was gone and the sextet were working well – maybe there was life in the old nag, after all? The indecision virus had transferred to the bunch as concerted effort gave way to stabs and digs – but team supreme, QuickStep, stepped up to the mark as the black, red and yellow of Boonen’s Belgian champ’s jersey began to show. 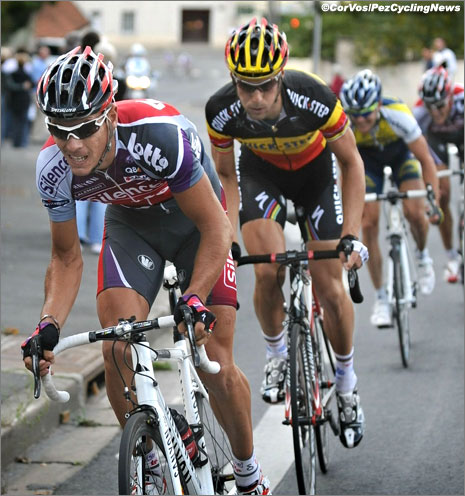 There’s just something about the final kilometers of Paris-Tours that seems to bring out the best in Philippe Gilbert.

Inside 10 miles – 16 K and the gap was still 20 seconds plus with Commonwealth Games champion, Matt Hayman doing the big spells.

The Finish Draws Near
At 12 K it was Skil’s Tom Veelers squeezing every second of TV time from the race – no doubt with DS Rudi Kemna bawling in his ear piece; ‘don’t just ride in, show yourself, show yourself!’ 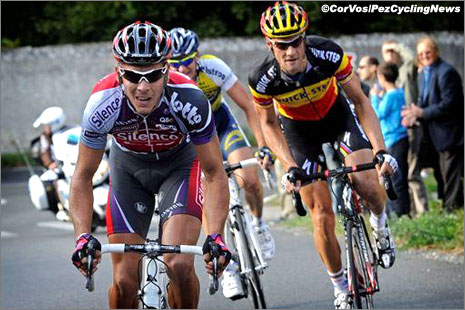 The break cooperated fully all the way to the line.

At 11 K it was over for the break as the race hit what would not normally even be credited as being hills – and suddenly there was a Royal Group at the front; Tom Boonen, Philippe Gilbert with team mate Greg Van Avermaet plus Vuelta stage winner, Borut Bozic. The four worked well, Veelers was gone, a huge crash stopped a large part of the peloton and the break had ‘race winning’ written all over it. ‘White Knight’ Pippo Pozzato (Katyusha) tried to bridge, but there was too much horsepower up front, despite Van Avermaet’s disappearance.

Into the last three kilometres and the arrow straight Avenue du Grammont; the three worked like a time trial squad, behind Pozzato looked cool but unlikely to close – and behind the Italian there was little organisation.

The sprinter’s break was definitely going all the way. 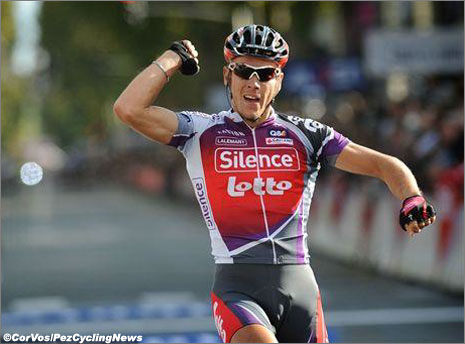 And finally, think how upsetting it must be if you had a large wager on one of the sprinter favourites for the race, Greipel, or perhaps . . . . Tyler Farrar – I need a drink!

***
Once we’d posted the race report, we tuned in to Gilbert’s post race interview on Belgian TV. He rode the last 10 kilometres of the race on Saturday, just to make sure that he knew every inch. He noted that it was a tail wind finish and asked his mechanic to fit a 54, rather than a 53 ring; that’s what you call “attention to detail ! 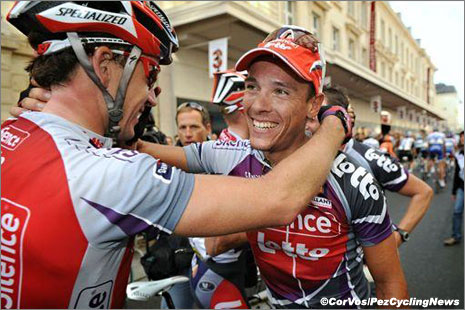