Riding the route of one, a couple, or all of the Spring Classics is one of the coolest things imaginable. Plowing your solitary furrow with the greats of old and now is special. It still only forms a part of the whole picture though. Following one of the Spring Classics live and in person brings the experience full circle. Watching Paris-Roubaix along the cobbles was nothing short of perfection.

To whittle down hundreds of pictures from four very different sectors of pave along the route of Paris-Roubaix for only one article seems unfair. I’ve found a compromise – two sectors per article, two articles to attempt to bring you a little closer to the action the day of one of the greatest spectacles in all of sport: the Hell of the North.

I used to think the moniker Hell of the North was a bit overdramatic, but after riding most of the sectors myself on Friday, I do in fact agree wholeheartedly. After watching the race on Sunday, I do not think you could use another word without demeaning the race. It is a terrible, cruel, mean race, and that’s why it’s so amazing. To watch the race fall apart as you watch along the route makes that much more of an impression. 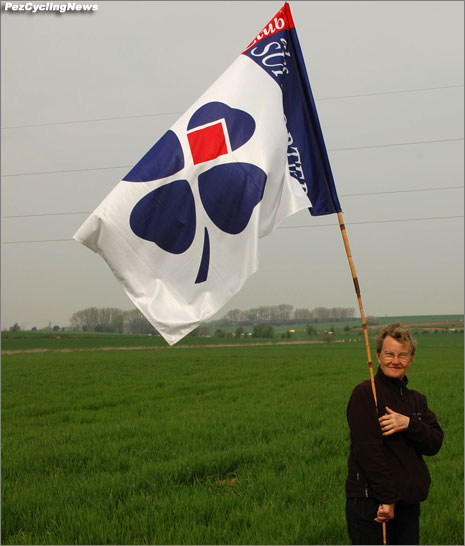 Sector 27 was a haven for all friends of La Francaise des Jeux.

Sector 27: The First Cobbles
Anyhow, let’s get to business. I’ve spent all week with Velo Classic Tours, and today our plan was to watch the race along four sectors: 27, 20, 15, and 6. The first two showed an interesting dynamic, as they come before the traditional breaking point of every Paris-Roubaix, the Trouee d’Arenberg. The second two allowed us to experience further just how things fall apart as the kilometer tally grows. It’s not just the race either. The first two sectors give you that family feel. Picnics, kids playing, peace were all readily available. 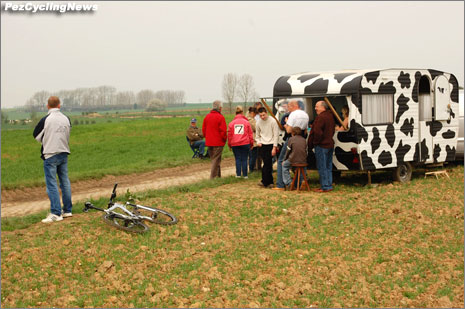 If I was painting my motorhome, I know for sure moo cow spots would be first on my list. Wait a second, what? A cow motorhome?

In terms of the crowd and the racing, this was rated PG at the most. Whereas on our fourth and final sector in Cysoing, Sector 6, the racing and crowd had decayed to R at best and possibly NC-17. The battered, beaten, and torn riders were met by a crowd that had drunk its fill hours before. It’s almost as if the fans feel the need to experience something extreme in order to come closer to their heroes. 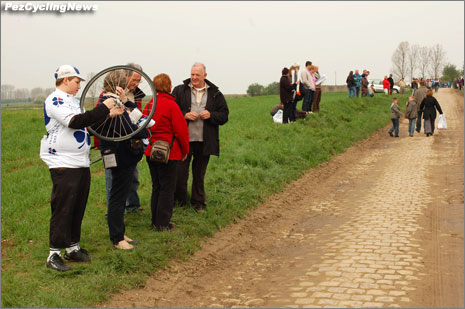 The crowds were relatively sparse, but then again, it’s hard to stack em up over 2.2km of cobbles in the middle of nowhere.

We arrived with plenty of time to spare before the race arrived. This provided a nice opportunity to enjoy a great Easter lunch with Peter and Lisa Easton. We chatted ad nauseam about the race, Peter patiently answering my downpour of questions. It really is a wonderful thing to wander into a cycling encyclopedia. I felt like a little kid and dad was telling me stories of the days of yore. It just further set the tone. Once we left the van to explore the length of Sector 27 in Troisvilles, I was jacked on Paris-Roubaix. 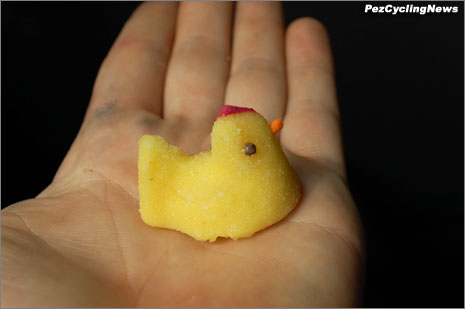 Maybe I was a little jacked on sugar too. This little Easter chick was yummy.

The entertainment just from walking the first cobbled sector increased, it seemed, with every steep. The characters on hand rival the race itself. I’m not kidding. You get a little bit of everything: 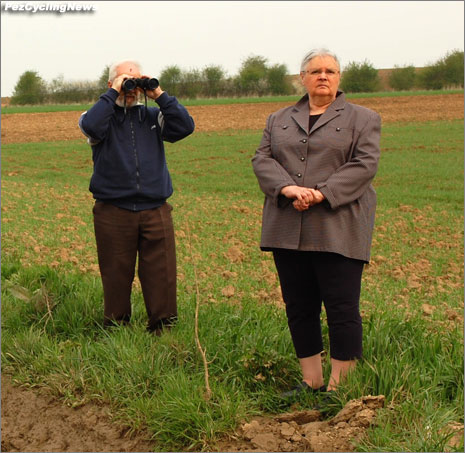 You get your older couple, complete with serious wife and husband scouting the horizon for the approaching dust storm. 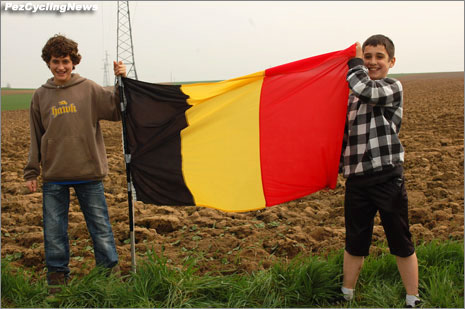 You get your kids who jump in front of you and insist you take a picture of their flag.

You get another kid who waves you down. Take a picture of me! I don’t know if that’s what she said, but she said some really excited words in French, and I deduced that she wanted her picture taken. If that doesn’t make you smile, nothing will. 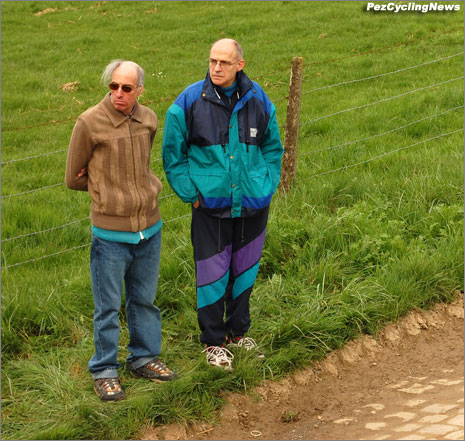 I strolled on down a bit further and stumbled on these guys – if this one doesn’t make you smile, just click on out of here.

After a good hour of roaming and enjoying the atmoshere, the helicopters became audible, the Velo Car drove by announcing the latest race news, and a couple of minutes later, the day’s break came roaring by. Except they weren’t roaring, they were racing at a very sane pace. There was no thundering craziness here. There was calm and cooperation up front. There were still 160 kilometers to go. 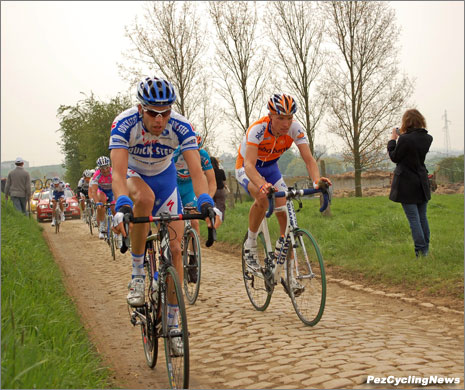 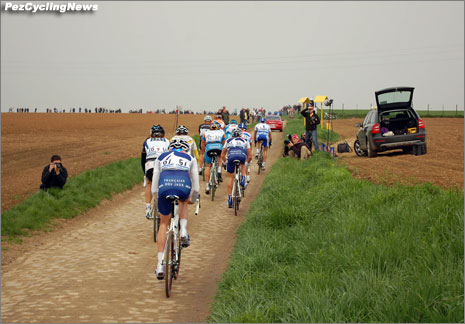 Behind the break, I don’t know how many minutes, I honestly don’t bother to count, the field came roaring by. The sound and the feel of about 160 bike racers tromping by over ancient cobbles is insane. The sound, the rumble you can feel in the ground, the breeze, the mutterings, the yells, the screeching brakes, and suddenly I realized that I was actually watching this. I had to put my camera down for a second and just take it all in. 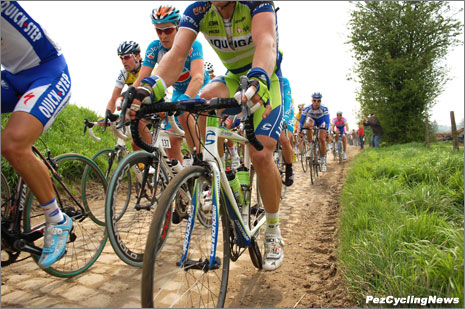 Yeah, you can get really close.

A bike race takes on a different perspective through a camera lens. It still feels like you’re watching it on tv. When I lowered it though, it hit me. It was wonderful. It’s amazing to see a ProTour field ride by. It’s so big, so shiny, so colorful. Pictures do not do it justice. But I try anyway. 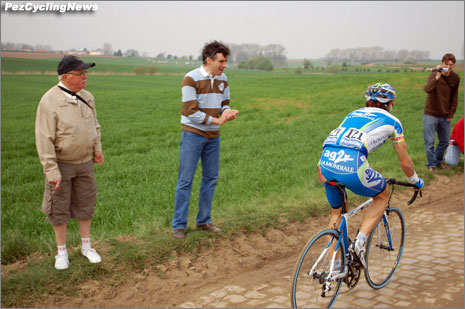 Behind the mostly intact peloton, the first casualties of the day were already enduring their fates. Martin Elmiger rolled by a little ways back with one ass cheek apple red and looking absolutely miserable. 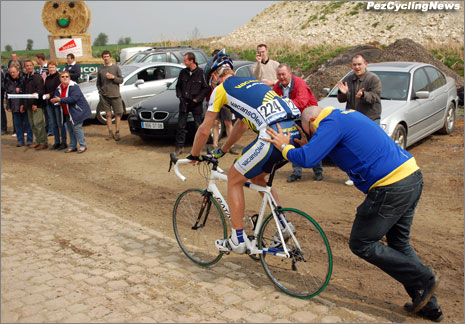 As I was running back to the van – I was a solid mile off and I needed to be there 4 minutes ago – I saw some real chaos unfolding as Vacansoleil rider Jens Mouris pulled over. His team car ground to a halt right behind him, whils the collected masses of team cars nearly stacked into each other. A detour was hastily decided up and the nice, green farm field became the new road. And when I say hastily, I mean instantly. Mouris got a new bike and was off again. I’m just going to guess that there is no way in Hell (of the North) that he finished, ok I’ll look it up…oh even worse! Hors Delay. That’s just mean. If a guy makes it to the velodrome, ya gotta give him a finishing place. It actually makes perfect sense with the whole cruel and unsual theme.

I got back to the van actually running. I dislike running, but I dislike holding Peter up even more. The whole deal with watching the race multiple times is a cleverly put together scheme of swooping in and out quickly and efficiently. My idea to walk to the other end of the sector? Not so clever. The key to the scheme staying ravelled was a departure before the big tour buses (the BIG buses) got out. We managed that with aplomb, and off we went to Sector 20. 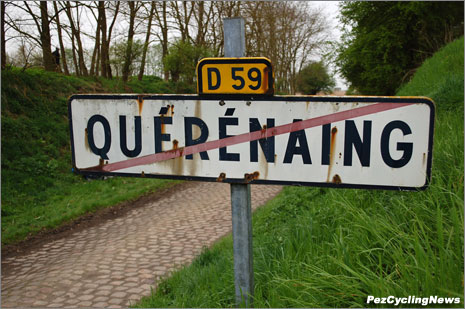 Sector 20: Watching From The Trees
We arrived in Querenaing in just the right amount of time – 15 minutes or so. We walked down, everyone found their happy spots, and waited for the circus to arrive. Apart from some beligerent high school age kids trying to get run over by the fore-running race caravan, I had a peaceful sit waiting for the second coming. 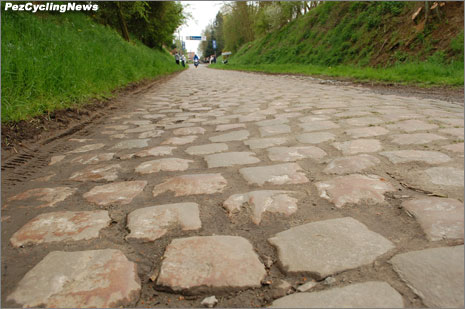 We hadn’t ridden these cobbles on Friday, we started with Sector 17, but my long day on the final 17 did teach me a couple of few things – I can at least look at a set of cobbles now and figure out how bad they’ll be. This sector was pretty ok by Paris-Roubaix standards. They were nice and evenly placed, there was a dirt shoulder you could get a piece of here and there, but it was a fairly long 2.2km. That’s just not much fun. 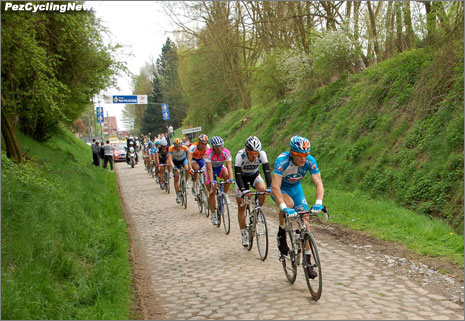 The rhythm of the race set in here: cars, motorbikes, Velo car blasting the race news, helicopter far off, helicopter close, oh there they are! The break was still intact and motoring along. They didn’t seem to be in too much of a hurry, but they were still going plenty fast. The race was 140k old at this point – 120k to go. 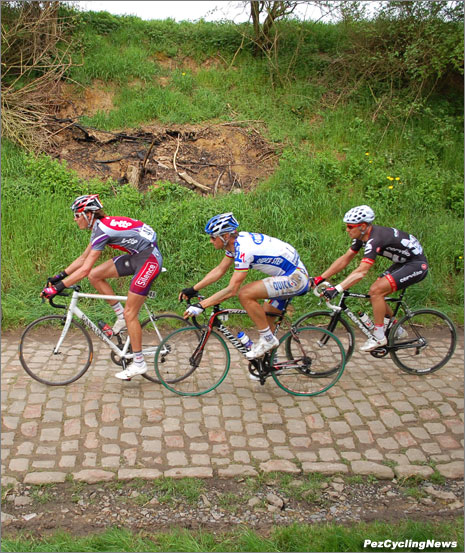 A little while later the field came bouncing by. Liquigas was inexplicably leading the lime green charge away from Querenaing, whilst a look back at my pictures in the van a little while later showed that Tom Boonen had to have felt the cruel pinch of pavement or rock a little while ago. That, or he figured he’d look even tougher if he smeared his shorts with some dirt. 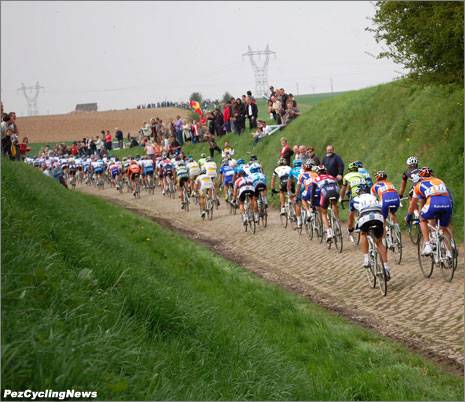 Just as soon as they’d come, they were gone again. The stragglers kept plodding through one by one over the next few minutes. There were some riders over 10 minutes in arrears already – the race hadn’t even run headlong into the Wall of Arenberg. I know it’s not a wall, but it really feels like it when you hit those cobbles. Don’t believe me? Try it yourself. 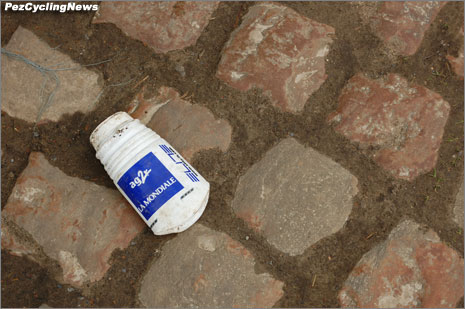 And so the race was gone again. Left behind were bottles galore, all beaten between car tire and rock.

Stay tuned as we head to the big party. The fans come out in full force and show off their Easter finest over Sectors 15 (Brillon) and 6 (Cysoing). Keep it PEZ!

For lots more pictures from Sunday and much more, head to Flickr!

Catching Up With Katyusha’s Ben Swift