The Univest Grand Prix is a UCI 2.2 stage race with a newly added Team Time Trial in Allentown, Pennsylvania and a European styled road race in Souderton, Pennsylvania. Univest has long been one of the top races on American soil each year. PEZ’s man in the Mid-Atlantic, Dave Berson, was on hand to take in the festivities as Amore e Vita dominated the proceedings.

Additionally, two options for a Cyclosportif ride has given fans a fully supported, inside view of the race. An American style criterium closed the weekend of racing in Doylestown, PA, just North of Philadelphia. Pez was on the scene to bring it to you. 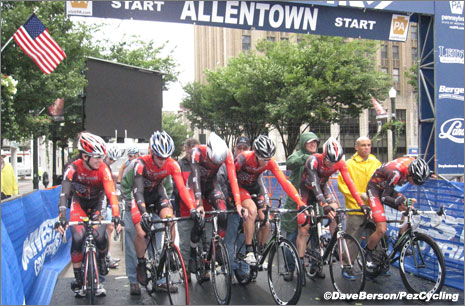 The weather forecast for Friday’s TTT was 100% rain. Pez can tell you that the weather could have been worse. It was wet out there, and windy, but when the first team hit the starting line a welcomed pause in the downpour suddenly showed itself. Heath Blackgrove of Team Rio Grande, part of the first team to ride the course, said “It was a good course with a bit of everything. He went on to say that “we didn’t want to take risks and lose guys, better to play it safe. Tomorrow we’ll ride near the front, cover the moves, and be attentive.” 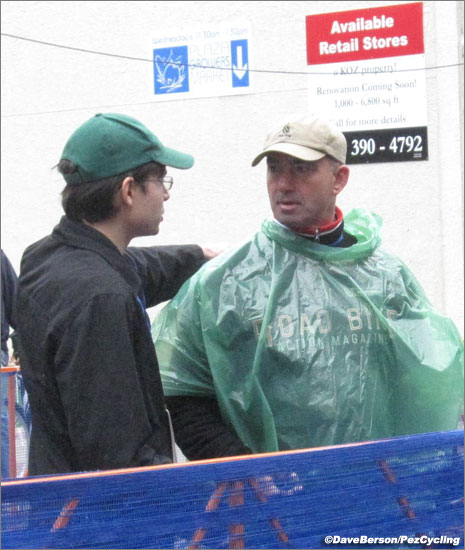 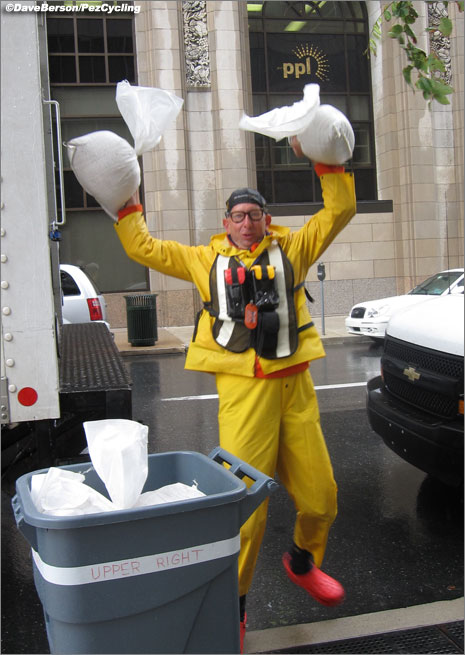 Big Al wasn’t too bothered by the weather.

Prior to the start, Race Director and President of Sparta Cycling, John Eustice, was inspecting his brave troops to make sure that the first year of the Team Time Trial event would be successful. His right hand man, Allan “Big Al” Rodzinski, a former professional, was collecting sand bags to batten down the course due to the expected 40 mph winds. The marshals, moto officials, even the “holders” at the start line were out there, ready for any weather, and doing a great job. 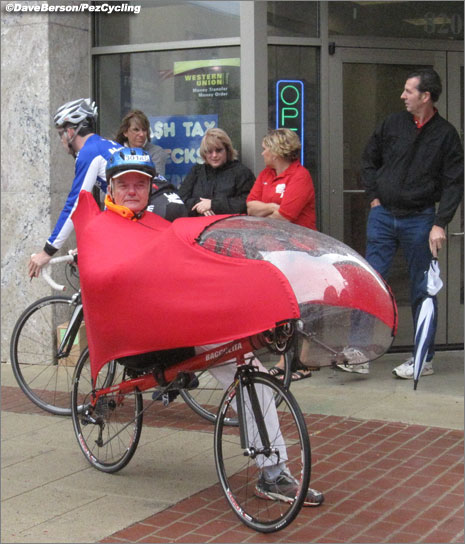 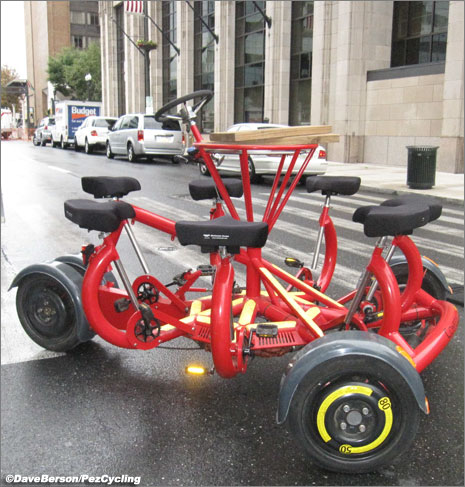 Where’s the start? 6 riders, one bike.

Each of the 25 teams had a “bike check” prior to the start. No aero equipment was permitted on the bikes and the wheels could not go beyond a certain depth. Given the wind conditions I think riders were all looking for the lowest profile wheels available. Although some riders wore aero TT helmets, most did not. Teams had to do two laps of a 3.8-mile circuit. 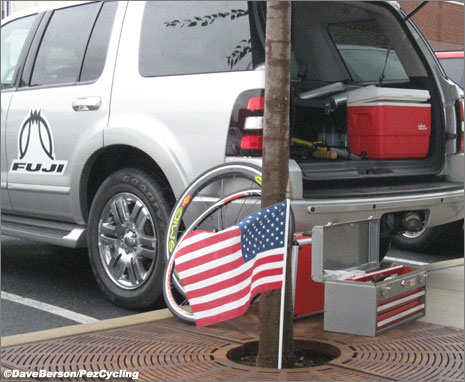 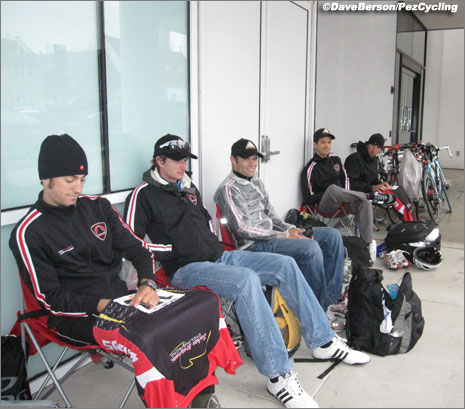 The boys from the Johan Bruyneel Cycling Academy get ready for some bike racing.

Given the significance of the date of the time trial, 9/11, a flag set up by the team car for Cycling Center/JBCA caught my eye. I found team leader Peter Horn warming up and staying dry. Horn said “they will give their best effort for the overall in the TT and go for it in the road race.” He went on to say that “the road race is a good course, like a European or Belgian race.” 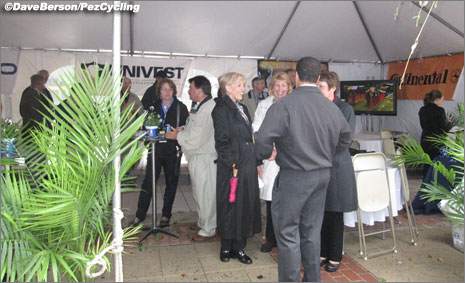 During the race, VIP’s could hang in a comfortable area and watch the teams out on the course live. Folks were still crowding the start/finish area , coming out from under awnings to cheer when the teams blazed through. Italian Amore & Vita Detweiler Hershey & Associates took the win by almost 12 seconds, placing Philip Mamos in the Leader’s jersey going into Saturday’s road race in Souderton.

John Eustice, former two-time U.S. National Champion created the Univest Grand Prix in 1998, modeled after the tough European races that he battled on as U.S. professional abroad. Racers face a grueling 60-mile course, starting and finishing in Souderton, PA, with 40 additional miles of a tough circuit to round out the 100-mile race. In keeping with the vision to create a European style race in the States, Eustice now gives cyclist the opportunity to experience what the race is like with a fully supported Cyclosportif 100k event. Pez was invited to “live the pro racing experience for a day.” 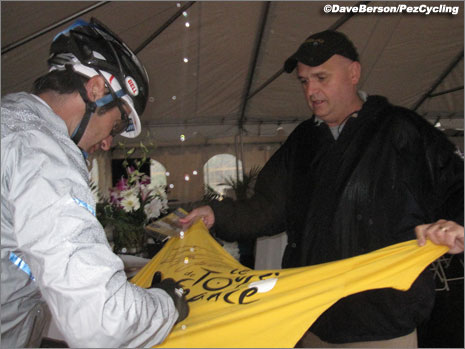 Bobby Julich, 3rd place finisher in the 1998 Tour De France and Bronze medalist at the 2004 Olympics was the leader for the 2009 Univest Cyclosportif 100k. Julich retired in 2008 and said that he’s already broken his top two rules since retiring. “I said I’d never put on a number or ride in the rain again,” said Julich. He went on to say that the Univest Cyclosportif ride would “not be the first time he’s broken that rule and that he was happy to be doing the event.” Looking very fit and trim I laughed when Julich said “don’t drop me.” 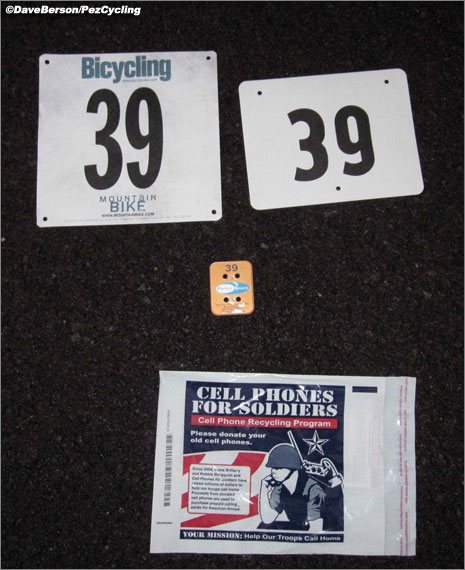 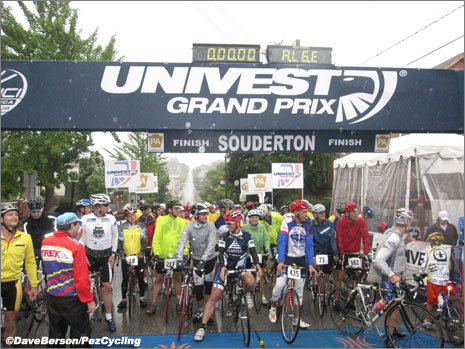 The riders in the cyclosportif get ready to go.

Numbers and a timing chip were assigned to each Cyclosportif participant. Once my number, chip, and waterproof cell phone protector were picked up it was time to report to the staging area. Univest Corporation participants and VIP’s were given the front few rows and they lined up with Bobby Julich. Riders had the option of doing a 100k or 40k event, but we all started out together. There were groups of riders for all speeds and abilities. The course is tough and technical so finding a comfortable pace and small pack to ride with is important. Rest stops with fuel or mechanical support for those who needed it were out along the course. I chose the shorter option so that I would get back to see the start of the road race. I will admit that I ran into some friends who had done the 100k event and who had beaten me back to the start. 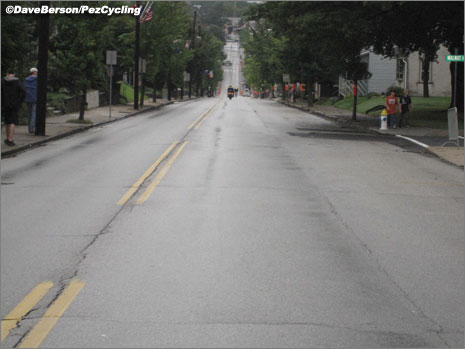 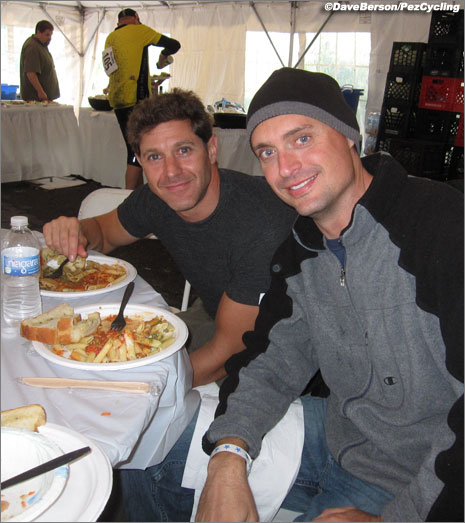 Once back to the finishing circuit, Cyclosportif participants descend down a long hill and up to the finish line. Their timing chip was collected, and it was lunchtime. We were treated to pasta, bread, and salad. It was all great but when I declined the pasta and just asked for salad I was given a strange look and passed an extra piece of bread. I had noticed the chocolate chip cookies at the far end of the table and decided to eat two of them instead of the pasta. 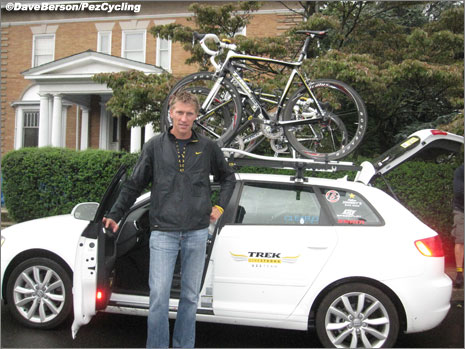 Axel Merckx was on directing duties for his Trek-Livestrong squad. 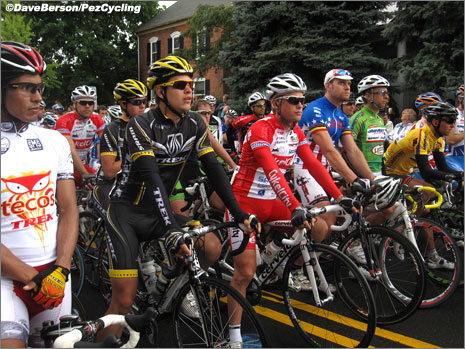 I was excited to say hello and good luck to Axel Merckx, who also Directs the Trek Livestrong Team. Just like at the TTT, the skies seemed to have given a break to the riders and the rain had slowed down considerably, almost coming to a complete stop. Riders lined up and a choir sang the U.S. National Anthem. Unfortunately, a crash involving 10 or more riders occurred in the first mile and sent two riders to the hospital. It had stopped raining but the course was still wet and very technical. Once underway, the riders had 60-miles of a large circuit then 11 laps of a short course back in town to bring the race to 100-miles. While they were out racing it gave me a chance to check out the kid’s events and hit the expo. 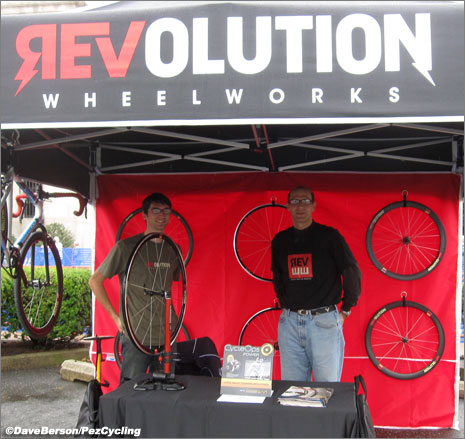 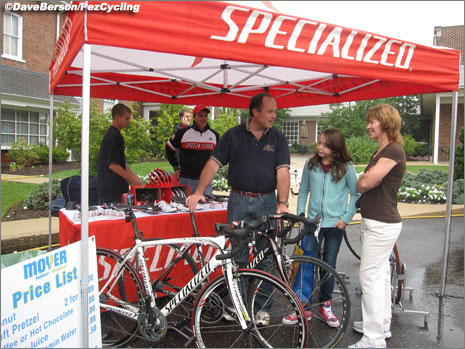 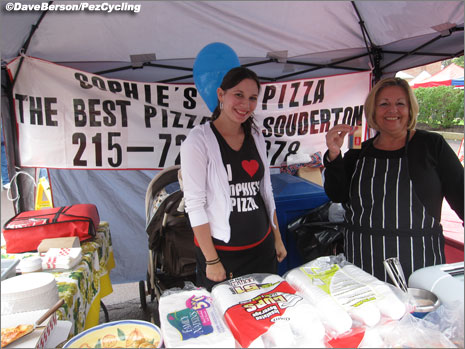 The expo area was packed with venders such as Specialized Bicycles and Revolution Wheel Works. Food was also in ample supply. My favorite was a slice of tomato pie from Sophie’s Pizza in downtown Souderton, PA. I passed on the Gelato but it sure looked good. Other vendors included an industrial and residential document shredding company, Shred, and House Van Draken, a non-profit educational company that goes into schools or to local events and demonstrates medieval jousting and wares. Check them out at www.housevondraken.org. 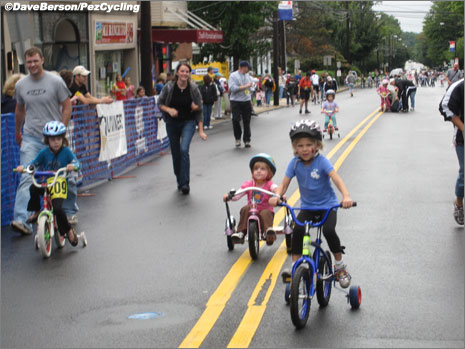 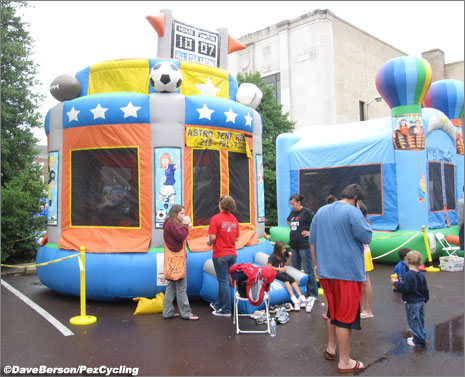 Along with a few age graded children’s races there were many activities for families. Two bouncy castles were on sites as well as arts and crafts, music, and toys. Food vendors were on site selling everything you would want, most with a local flavor. Pizza, sandwiches, pretzels, and iced teas were all available. Clothing vendors, jewelry, and many local community originations had booths set up. There was plenty of entertainment for all until the racers came back to the finishing circuits in Souderton, PA. 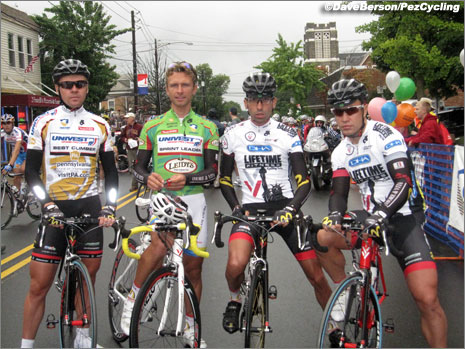 Out on the course a large break was chased down by Roberto Gaggioli’s Amore & Vita/DHA, P.C. team at the 30-mile mark once it neared 2-minutes. Once in Souderton, a small group of 7 riders had a 15-second advantage and a large pack of 40 or more riders was bearing down on them. Once caught, Amore rider Volodymyr Starchyk was set up for the sprint by his hard working team and he grabbed the win and overall Leader’s jersey from teammate Philipp Mamos. Patrik Stenberg of Tem Cykelcity/Klehr Harrson took second with Mamos in third.. Overall stage race win went to Starchyk, Mamos in second, and Stenberg in third. Next up, the Univest Grand Prix Criterium in Doylestown, PA. 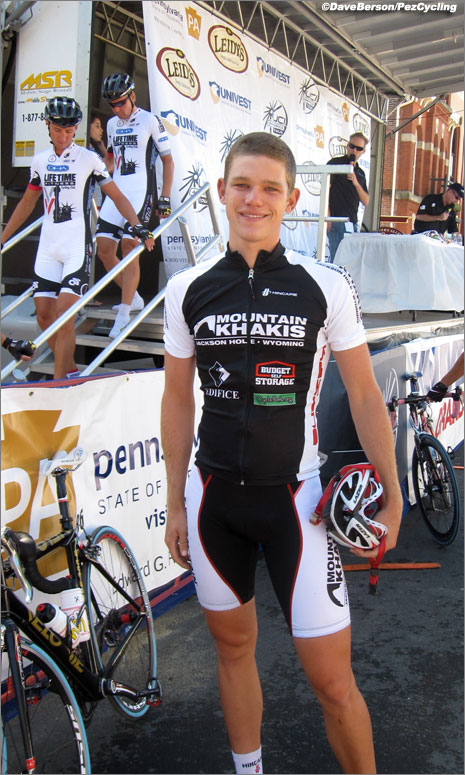 Sunday’s Doylestown Criterium, the closing event of the Univest Grand Prix was held under beautiful weather and in front of large crowds all over the course. Riders did 34 laps of this 1.4 mile course for the 50-mile event. Six-Day track rider Jackie Simes of Team Mountain Khakis said it “was a good course, really technical.” Asked if his track experience will help him today, Simes said “ track racing in general will help on a short and fast course like this. 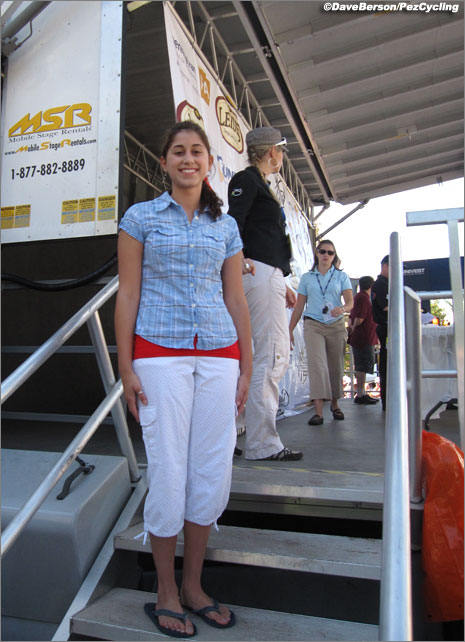 High School senior Kierstyn Gunn sang the National Anthem to start things off. Gunn has been singing since she was three years old and hopes to go to Westminster Choir College. Out on the course Duane Perkins and Roberta Bryson were in Doylestown observing things. Perkins hopes to revive a race in Connecticut and wanted to see Eustice in action. Jurgita lives on the course and said “it’s a great event that brings the community together.” She went on to say “we get to meet people from all over town and we always come out for it.” 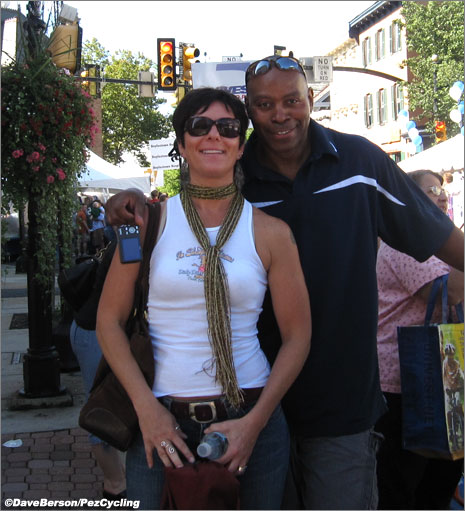 Amore & Vita/Lifetime Fitness-DHA swept the weekend with another win. There were constant attacks but it stayed together and Yuri Metlushenko won the sprint, causing his team to chant “Yuri, Yuri, Yuri.” Roberto Gaggioli’s Amore & Vita team won Friday’s time trial, took 1st and 3rd in the road race, 1st and 2nd overall in the Stage Race G.C. and a win in the criterium. Maladets, or good job in Russian, Buono, in Italian.

I can’t wait for next year. Hope you enjoyed the coverage here at Pez.