“De Ronde Van Vlaanderen” or simply, “De Ronde” is the biggest one day bike race in the world. A whole nation’s focus – and the rest of the cycling world’s eyes – are on only one thing from now until late this coming Sunday afternoon; the 260 kilometres, 16 climbs, cobbles, dust, wind, rain and mud that are the Tour of Flanders.

The training has been done – from last November if you’re serious about winning – the preparatory races have been ridden and if Lady Luck has spared you the crashes and illness that can scupper your dreams, all you have to do now is avoid the self doubt and nerves that can crush you as surely as a rear wheel puncture on the Bosberg.

What Kind Of A Rider Are You?
You’ll have ridden the race many times; there’s so much to learn – the hills and more importantly, the approach to them; the descents; the cobbled sections where the cross winds can forge the echelon; that deceptive last kilometre. It took the 1997 winner, Denmark’s Rolf Sorensen six attempts and more to make the podium in ’91. But it was another six years before he grabbed the result that means his name is now chiselled in stone. 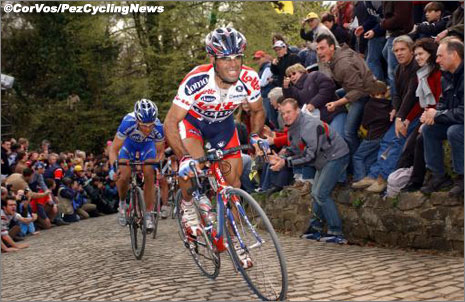 The description ‘built like a brick outhouse’ seems to work just fine for De Peet.

You’ll be a big man, if not tall, then you have to be a, “brick built outhouse” – light weights bounce around on the cobbles and get lost in the brutal fight for position approaching every climb. Jeremy Hunt branded the run in to the climbs; “more dangerous than a bunch sprint,” and don’t forget – there are 16 of them. 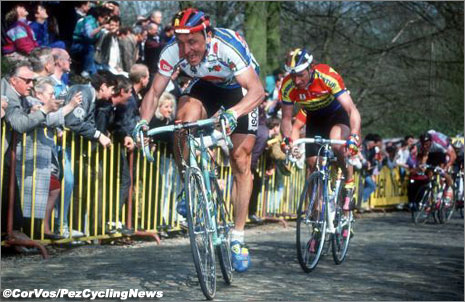 Powerful would be a good description for Mr. Tchmil.

You’ll be powerful; not necessarily a good climber in the conventional sense, but able to turn on the nitro boost to blast the savage ramps where the fans will be ten deep and keen to see you crack. And if you haven’t conditioned your body to recovering for the next climb within a couple of minutes, then you can’t win – the Eikenberg comes at 201 K, Varent at 206, Leberg 212, Berendries at 216, Valkenberg at 222, Tenbosse at 229, Geraardsbergen at 244 and Bosberg at 248. 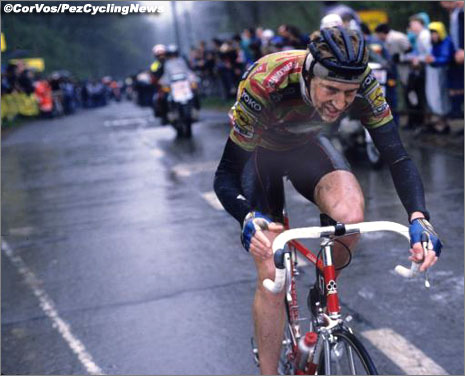 Mr. Bosberg would be the best way to describe Van Hooydonck!

You’ll need to have the form of your life; as with the Primavera, only the ‘best of the best’ can win this race. And just as importantly, you’ll have to believe in yourself with all of your heart and soul.

And finally, the stats say that it’s best to be Belgian – 65 wins from 92 starts. 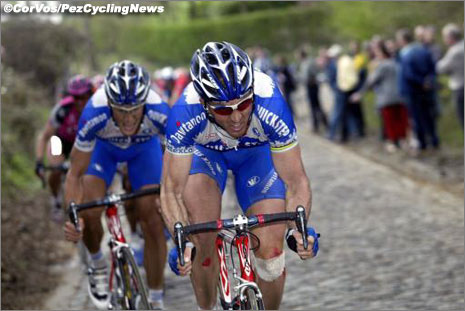 Your archetypal flahute followed by his successor.

Who To Look For On Sunday
There are races coming in to Flanders which give pointers to who’ll be there on Sunday.

Gent – Gent saw Thor Hushovd (Cervelo & Norway) in winning form, he also made the podium in Milan – San Remo, so the distance will be no problem. 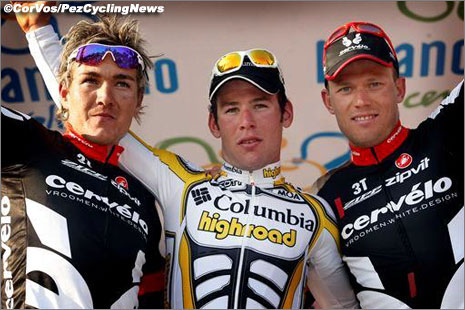 Hushovd and Haussler should be a solid combo on Sunday.

Talking of the Primavera, it was only the force of nature that is Mark Cavendish (Columbia & GB) who prevented Hushovd’s Austrialian team mate, Heinrich Haussler from winning cycling’s longest Monument. He was flying at Gent and Kuurne too – the only question is; “how long can he surf this wave of form?” 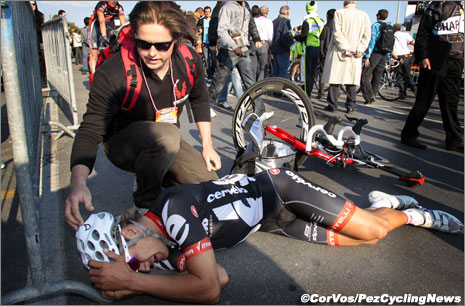 He has come oh so close to two big races this year: Het Volk and Milano-Sanremo.

At Kuurne, QuickStep pulled the fat out of the fire after a disastrous day at Gent the day before, as local favourite Tom Boonen sent everyone home happy. 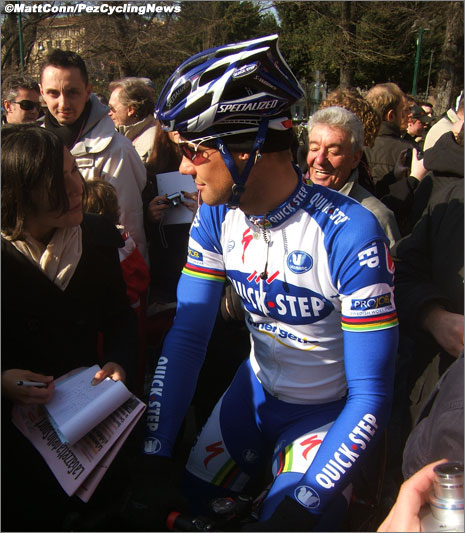 Tommeke has been solid, but not spectacular so far this Spring. It’s about time for him to come out to play though.

The Grand Prix E3, last Saturday, saw a man who undoubtedly has the class, but until now, perhaps not the commitment, make winning look easy. Filippo Pozzato (Katyusha & Italy) skimmed across the cobbles with what looked the lightest of touches on the pedals and then easily out-sprinted Boonen. 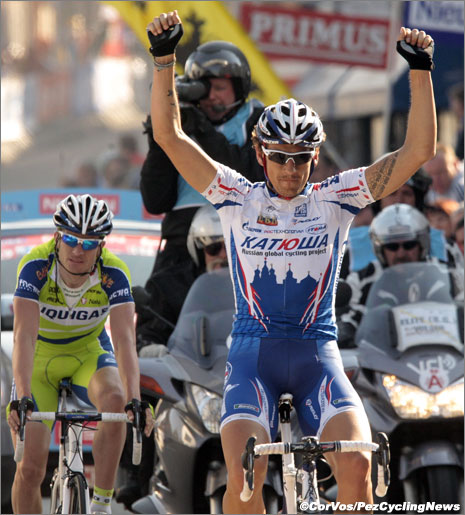 Pippo looks nothing short of imperial at the moment.

This week, in the final tune-up race, the Three Days of De Panne, it was again the tall Italian with the radical position making the headlines. On the tough first stage he and Liquigas’s Belgian, Frederik Willems prized themselves clear to finish a minute ahead of the peloton. “Pippo” won the stage then defended his overall lead on stage 2; however, a finalй crash outside the safety of the three kilometre banner on stage 3 meant there would be no overall win. And don’t forget that he was 6th last year – the dues are paid. 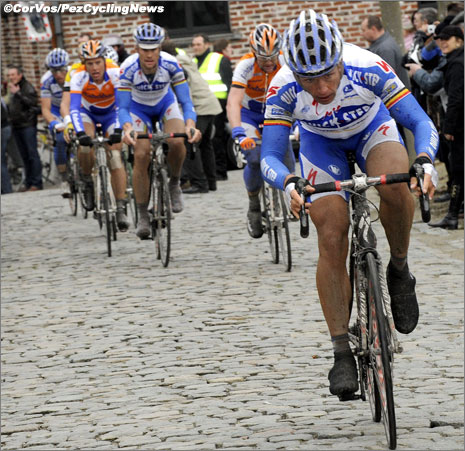 These names require no detective work, their performances have spelled out “favourite” for all to read. Cult 70’s Scottish pro, Billy Bilsland always says that pro bike racing is “about the last hour.” And it won’t just be the names above who are there during those vital 60 minutes. 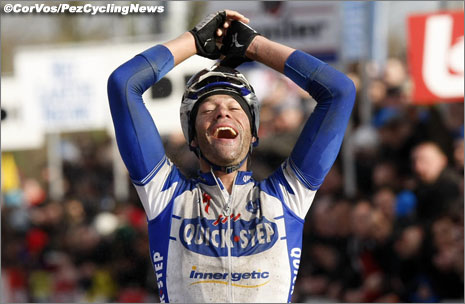 Boonen, Devolder, and Chavanel not good enough for you? Don’t forget about Mr. Van Impe. He’s in for a career year. This week could be a big one for him. He’s the perfect wild card right now with so many superstars in the line-up.

Rabobank have been impressively strong in Belgium this season, but their tactical sense has not matched their horsepower. Albeit Graeme Brown (Australia) did take the laurels at Nokere, after “turning right” in front of Ben Swift (Katyusha & GB). 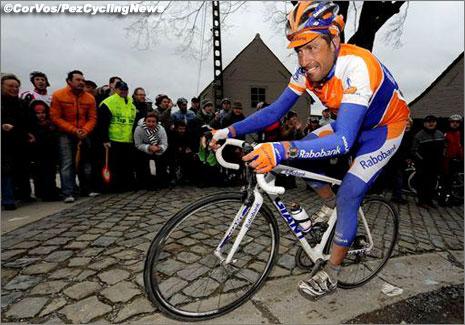 Will this finally be the year for Flecha to get that little bit of good fortune that he so desperately needs?

Juan Antonio Flecha (Spain) was third for the orange men last year and new team mate, Nick Nuyens was second back then in the colours of Cofidis. Flecha’s remarkable ability to go and go again has to make him a favourite. Nuyens seemed to have the world at his feet a year or two ago; he closed 2004 with a win in Paris – Brussels and opened 2005 with a win in Het Volk. But the trajectory has flattened since then; a win here would be the tonic his career needs and is perfectly feasible. 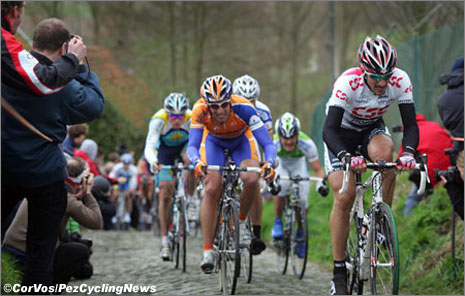 Juan Antonio Flecha is always there. Always. He’s always lingering in every picture it seems. Don’t forget about Spartacus either boys and girls. Never forget about Cancellara.

Belgium’s “other” team; Silence-Lotto haven’t had a great start to the season but it would be unwise to write off three times second Leif Hoste and fellow Belgian Greg Van Avermaet, who was 8th last year. 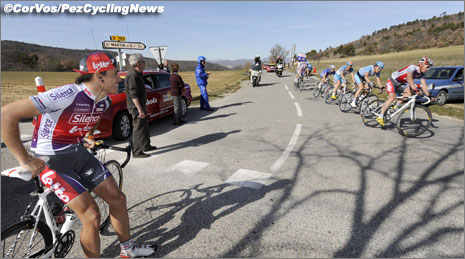 Gilbert swears he doesn’t have a chance, Hoste is coming on…what will we get from Silence Lotto on Sunday? They’re a star-studded team, are they really such underdogs?

Columbia have ‘old dog’ George Hincapie; a podium is possible, but no more. At the time of writing, Cav was not on the start sheet – he’ll be saving it all for Gent-Wevelgem. 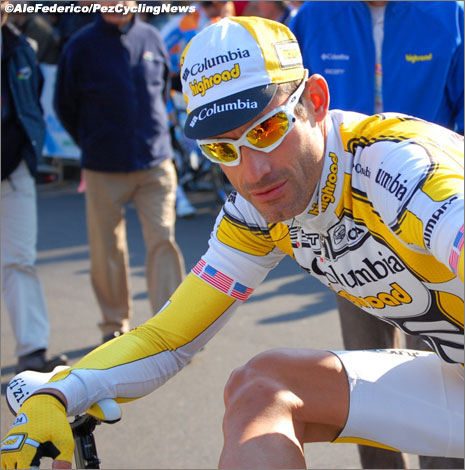 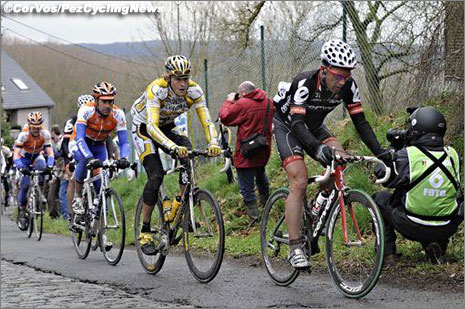 Marcus Burghardt (Columbia) is no stranger to big Classics results – he took Gent-Wevelgem a few years back. He’ll form an effective combo with Hincapie.

And the bottom line?

My heart says Boonen, but my head says Pozzato – but please Pippo, no crazy hair cuts!