The 73rd Fleche Wallonne or ‘Walloon Arrow’ – the history books say that it was given this name either because it sliced straight across Wallonia, like an arrow; or because the parcours of a straight leg (from Charleroi, these days) followed by triangular circuits (around Huy) looked like an arrow.

Wallonia is Flanders’ hillier, French speaking neighbour to the south; along with the city of Brussels they make up the three components of the country we call Belgium. Wallonia used to be the rich part of Belgium, but the balance of prosperity has swung north; a drive around this area and its dilapidated towns contrasts sharply with affluent Flanders. 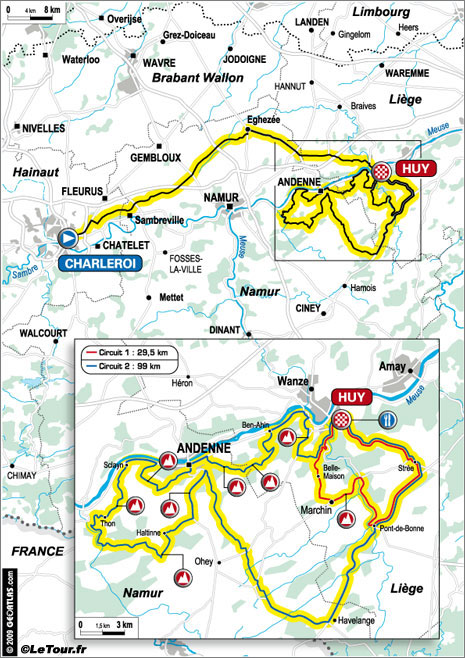 At 200 kilometres it should be an open race; that extra one-and-a-half-hours up to full 260 K classic distance does separate the men from the boys.

That said, this is a man’s race; but only for homo sapiens with the build, power-to-weight ratio and determination to tackle one nasty, short, steep climb after another. The race is defined by the brutal 1300 metre ‘Mur de Huy’ – ‘Mur’ is French for wall and the riders have to hoist themselves around its 26% hairpin three times; the average gradient is 9% with the finish right at the top of the third ascent. 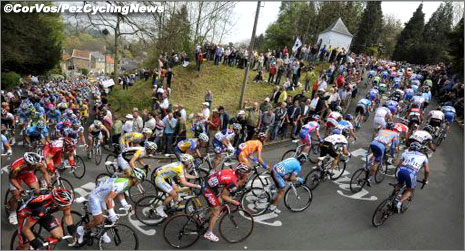 It needs no introduction – one of the meanest climbs in bike racing.

It’s not just the Mur though, there are ‘Cotes’ (climbs) aplenty – d’Ahin, de Bouselle, Bonneville and Haut Bois to name but four; and that’s before we look at the unclassified lumps. In truth, there’s hardly a flat piece of road in the entire race – one bright note is that good weather is forecast, however. 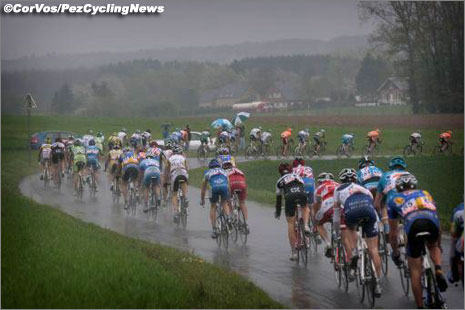 The weather looks like it will be a bit more gracious this year.

‘Record men’ on three wins are, Marcel Kint of Belgium, from the 40’s (that’s before even my time), Eddy Merckx in ’67, ’70 and ’72 – (I do remember that!) and dapper Venetian, Moreno Argentin in ’90, ’91 and ’94 – who was virtually unbeatable in an uphill sprint from the late 80’s until the mid-90’s. We should also mention that in 1996 an American rider named Lance Armstrong scored his only (count ‘em) Northern classic win here (I guess we’ll give him San Sebastian). 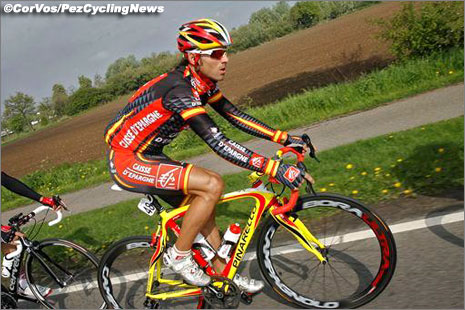 The last six winners are typical of the riders who can overcome here – Kirchen, Rebellin (twice), Valverde, Di Luca and Astarloa – all smaller men but possessed of big engines. For 2009 there’s no reason to believe that the winner will be of any other breed. 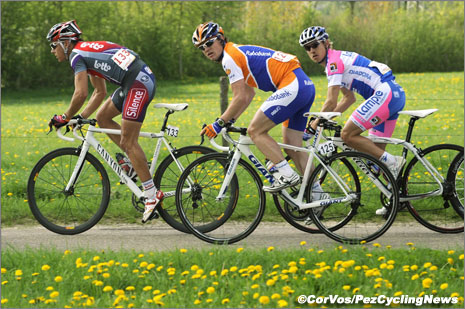 Three to watch on Wednesday: the Walloon Gilbert, Nick Nuyens, and at some point a definite winner atop the Mur de Huy: Damiano Cunego.

The Amstel Gold usually gives good clues as to who will be up there on the Mur mid-week. Last year it was Damiano Cunego (Lampre & Italy) who triumphed in the Amstel, the Wednesday saw him third; perennial Davide Rebellin (Diquigiovanni & Italy) was respectively in 4th and 6th places; Christian Pfannberger (then Barloworld, now Katyusha & Austria) took 6th and 9th positions whilst Valverde’s loyal Caisse D’Epargne lieutenant, Joaquim Rodriguez placed 8th in both races. Pfannberger took 9th on Sunday at the Amstel, too and is a strong bet for the podium this year. 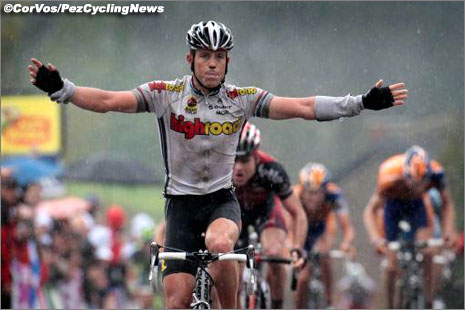 Kirchen was a quality winner last year. It’s not sure how he’s going heading into Wednesday though.

The 2008 Fleche went to High Road’s Tour yellow jersey holder, Kim Kirchen of Luxembourg with Cadel Evans (Silence & Australia) in second. All of these men have to be considered again this year, albeit Kirchen is alleged to be fighting back to full fitness – but remember that his is the team that told us Cav was just in Milan – San Remo for ‘experience!’ 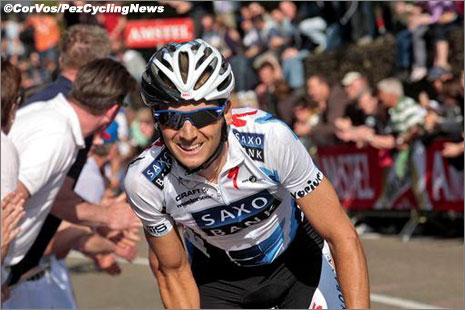 Karsten Kroon has been knocking on the door of Classics success for far too long. Someone let him in.

There are other names from last year’s Fleche top ten which strike cords – in fourth position was ‘climbing super star in the ascendant,’ Robert Gesink (Rabobank & The Netherlands) – he was third on Sunday in the Amstel and his lean frame would surely be in the mix come the third ascent of the wall, if not for an untimely bout of tendonitis keeping him off the bike for this year’s race. 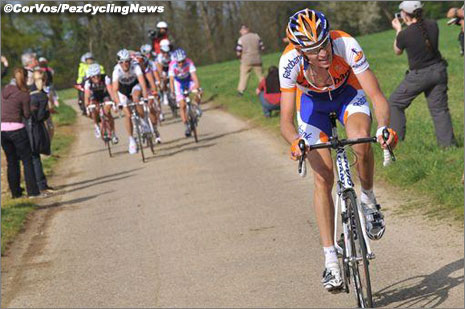 Gesink surely has the talent and immense climbing prowess. It won’t be long before he’s raking in the big wins. We won’t see him at Fleche, but maybe Liege.

In seventh place last year was Michael Albasini (Columbia & Switzerland) Dario Cioni was his team mate at Liquigas and marked him then as one to watch; 15th at the Amstel on Sunday and a recent stage win in the Pais Vasco are strong indicators of a man who will fancy his chances. 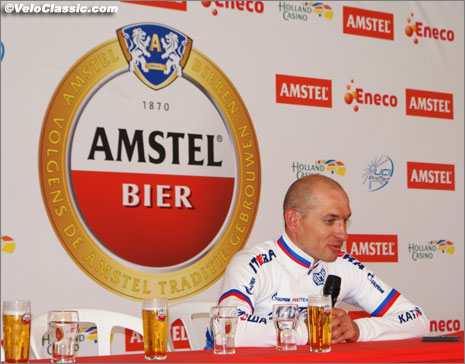 Ivanov has always been around and active in the Ardennes. Huy might be a bit much for his sturdy frame though.

This year’s Amstel winner, Serguei Ivanov (Katyusha & Russia) is powerful, but maybe just too chunky for Huy; not so second placed Karsten Kroon (The Netherlands & Saxo Bank) who was third here in 2006; Gesink we’ve discussed; in fourth spot was the increasingly versatile Philippe Gilbert (Silence & Belgium), he’s a Walloon so this would be a nice home win for him. 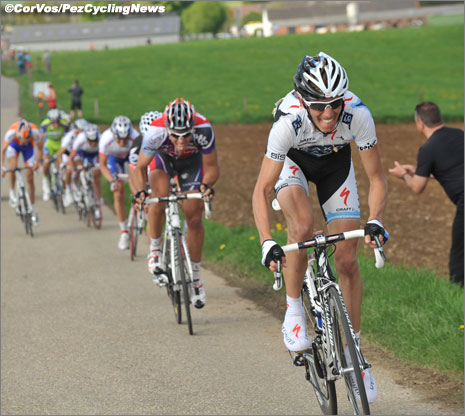 Like Gesink, Andy Schleck will be a name we’ll be hollering for a long while. He’ll surely be one to watch for the rest of the week and beyond.

Fifth was a disappointed Damiano Cunego, men with points to prove are always dangerous; sixth was Saxo Bank’s Russian hard man Alexandr Kolobnev, for me he falls into the Ivanov category of ‘too chunky for the Mur’ and in seventh spot was Simon Gerrans (Cervelo & Australia), small, aggressive, powerful – he could be up there. 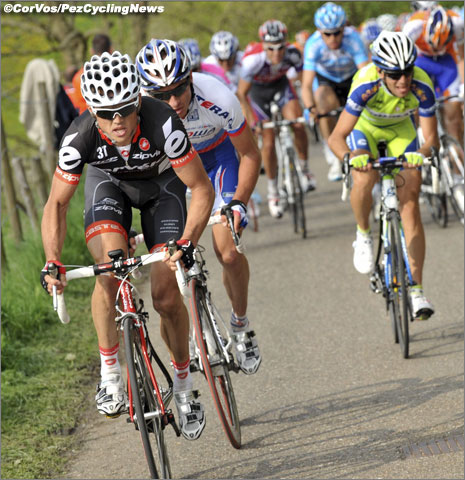 Gerrans looked great on the Keutenberg on Sunday. Is there more to come this week? 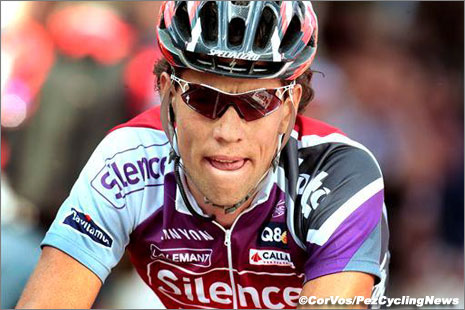 A name to watch that hasn’t seen much ink lately? Thomas Dekker. Dekker rode a great Amstel and drove the chasing field into the final climb of the Cauberg. It’s time for a return from the uber-talent.

It’s an interesting race, for sure.

If I’m pushed – Cunego to win; but perm any of the above for those other podium places!