Sure, the name has changed for 2009, but whatever you want to call it, it’s the Belgian Opener, and many liken this first Saturday of racing in Belgium to the Belgians own World Championships. Ed Hood takes us inside one of the biggest and baddest races of the year…

The Tour of California is a cool race; the list of stage winners speaks for itself – Cancellara, Hushovd, Cavendish, Leipheimer, Schleck – names don’t come much bigger. It’s hard to believe that its only been around for four years and that there have only been two winners of the event since it’s inception in 2006 – Floyd Landis and Levi. Landis – winner of the first edition of the race in 2006 – was born in 1975; but some 40 years before he came into the world, Belgium’s Jean Bogearts was winning the first edition of Het Volk.

This Saturday will be the 62nd edition (or 64th depending upon whether you count the two editions lost to snow) of what most would agree is the start of the ‘real’ season, a race steeped in tradition and one which most Belgian riders would sacrifice body parts in order to win.

Let’s deal with the name first, the race was named after the sponsoring Flemish newspaper Het Volk, literally, ‘The People.’ But Het Volk ceased publication last year and the race now carries the name of another Flemish paper, ‘Het Nieuwsblad.’ 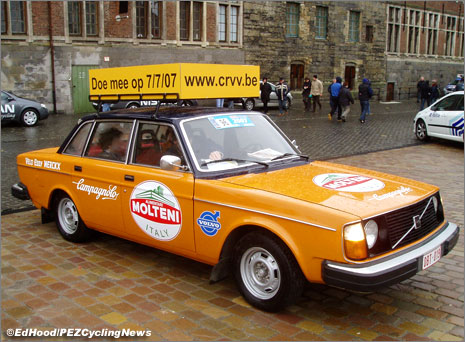 A car like this will take you back a few decades.

In other papers and some of the other media, the race was never referred to as ‘Het Volk’ – free publicity for rivals isn’t a concept that finds much favour within the news industry – and the race was known locally as Gent-Gent. My buddy and fluent Flemish speaker, Stevie, never refers to it as Het Volk, always Gent-Gent; but to old sad guys like me, it will always be Het Volk. 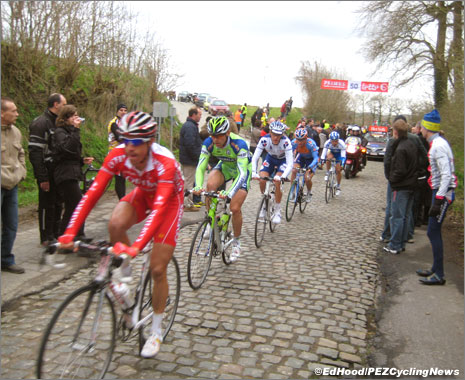 Are you ready for some cobbles?

Known as a ‘semi-classic’ or a ‘mini Tour of Flanders,’ this year’s parcours will be 204.5 kilometres, as opposed to the 261.5 kilometres of the ‘Ronde.’ Both races share many of the same climbs, or ‘hellingen’ in Flemish – Tenbosse, Berendries and Eikenberg are names you’ll find in both sets of parcours; albeit Het Volk has a mere 11 savage ascents, the Ronde has 16. 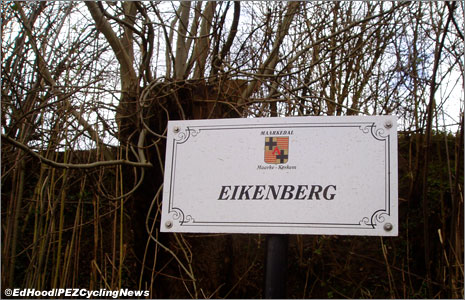 The bergs are very well marked, no confusion in Flanders. 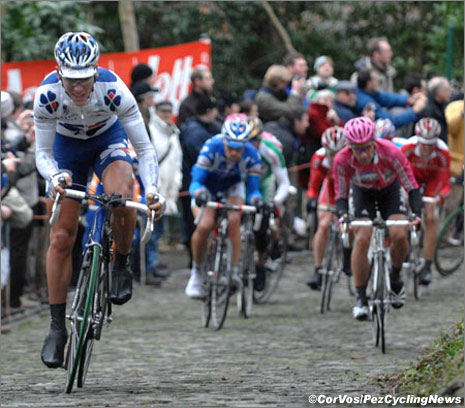 The legendary Muur is always on the agenda, but relatively early on in the day.

In Flemish, cobbles are ‘kasseien,’ another feature which it shares with the bigger race in April and which helps give these races their particular character. 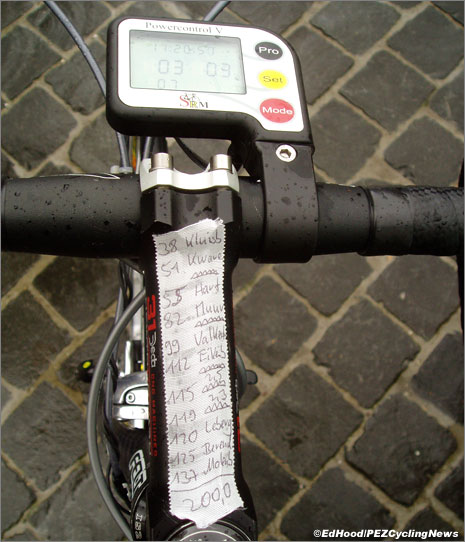 Hills and cobbled stretches are tangibles; where they come is easy to write on a piece of tape and stick to the extension – what’s not so easy to plan for is the weather.

Twice in my life time, Het Volk has succumbed to snow, and if it’s wet, cold and windy then much of the field are beaten before they start; days where riders like Merckx and Museeuw would be rubbing their hands in anticipation. 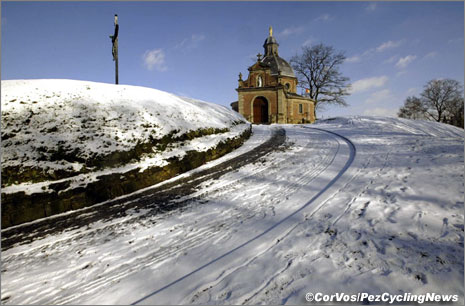 Hopefully snow stays away for the weekend. 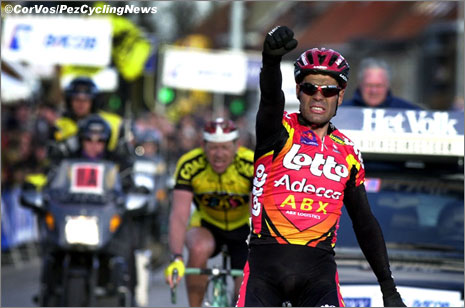 If you take a look at one of those websites which has the national flag of the winner displayed beside his name, there’s a heck of a lot of red, yellow and black on display. 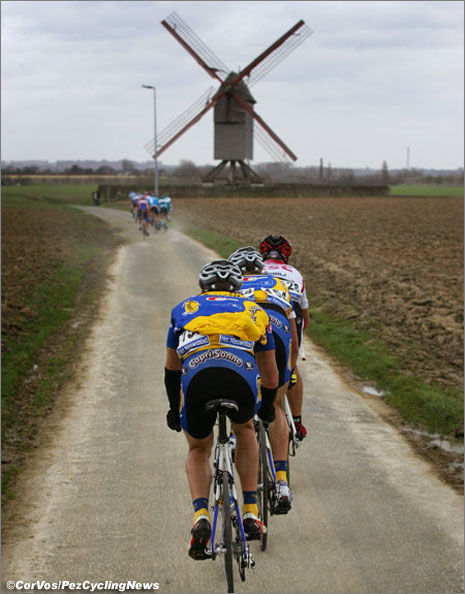 Wonder why so many Belgians? A little local knowledge of roads like this goes a long way.

Of the 61 editions, Belgians have won 53; in joint second are the Netherlands and Italy – on three each. The only other two nations to have won are Ireland, with the late, great Seamus Elliot in ’59 and Germany with Andreas Kappes in ’90, exploiting his stellar early season form from the six day circuit. 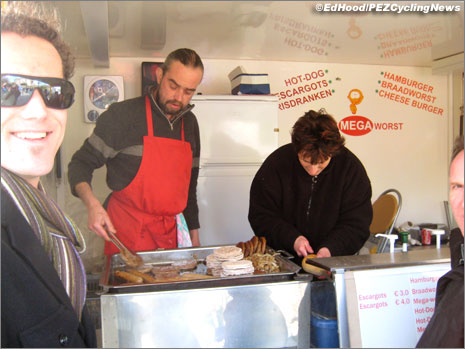 Generally the winner will be a hard, physical rider who has no problems in the positioning melee which precedes every climb. If the wind isn’t too strong and there’s not too much rain or snow, then class can win out – take Filippo Pozzato’s (Liquigas) 2007 win as an example. 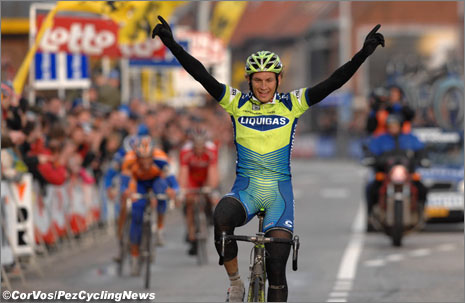 Incidentally, my friend and commentator on all things Belgian cycling has never fully recovered from Pozzato’s win, insisting that for a man as interested in his coiffure as the Italian to win is an affront to all the race stands for – he has a point! 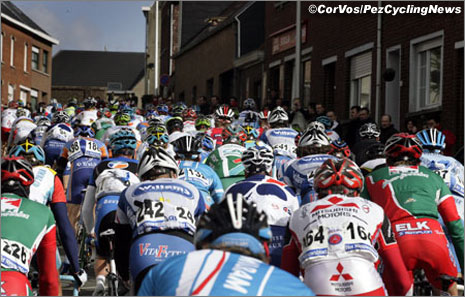 You can’t do well in Flanders without some physical abilities not associated with pedalling hard.

The stats point to a Belgian; Philippe Gilbert (Silence-Lotto) has won two of the last three editions and has the class to make it three. 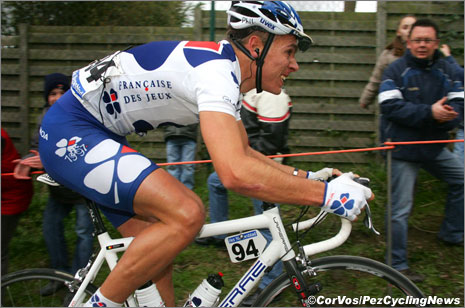 Silence will have quite the gallery of stars this weekend: Gilbert, Hoste, and Van Avermaet to name but three.

In 2005 it looked like Nick Nuyens (Rabobank) was on the road to greatness when he won the race in solitary splendour coming off a great Autumn, but the plot hasn’t panned out that way, he was second last year and would love to win here and get his career back on track.

Tom Boonen (QuickStep) was second to Nuyens in ’05 and third to Pozzato in ’07; every Belgian wants this one on their palmares, most don’t have the ability – ‘Tommeke’ does. 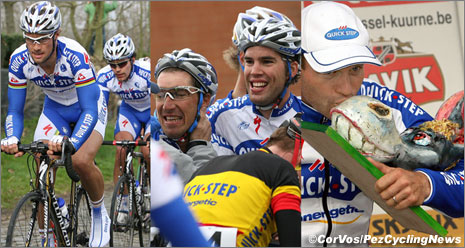 Ok, so the donkey is KBK’s, but you get the idea: QuickStep is an armada.

Boonen’s former team mate, big Gert Steegmans (Katusha) is a rider in his prime, with two wins in 2009 already and all the physical attributes it takes to top the podium – he won’t be far away.

You’ll notice that the favourites all have experience of the race, a rider has to know the roads, the cobbled sections, the approaches to the climbs and where the cross winds will come before he can think about winning here.

That said, in 1969 a young rider who was competing in his first ever pro race at Het Volk went out and won it – but his name was Roger de Vlaeminck!

And picking a winner from outside of the flatlands?

Thor Hushovd (Cervelo & Norway) was third last year and that stage win in California saves us the trouble of worrying about his form. And don’t forget his British team mate, Roger Hammond – he looks leaner than we’ve ever seen him and that stage win in Qatar gave us a big clue about the way he is going. 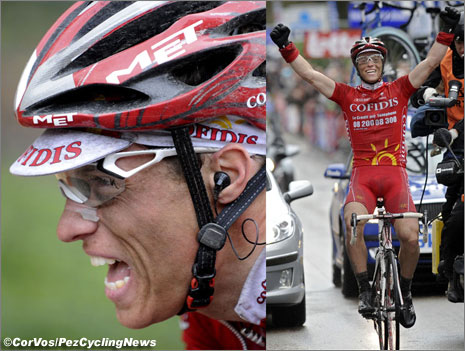 Sylvain Chavanel will make a fantastic addition to QuickStep this weekend (and 2009).

Sylvain Chavanel demonstrated the toughness and daring that it takes to win a race like this with victories in 2008 at Dwars door Vlaanderen and Brabantse Pijl. And he’s now backed by the best cobbled classic team in the business – QuickStep. But the stats aren’t in his favour; a Frenchman has never won this race. 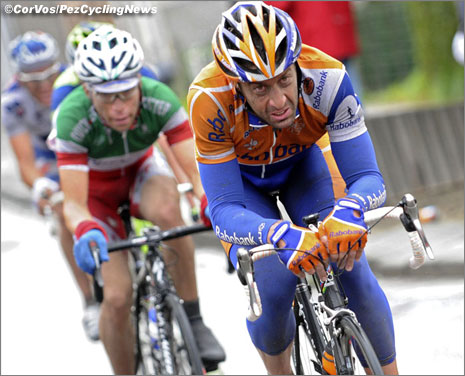 Juan Antonio Flecha has been close for far too long. Will he get the big break this year?

Spain’s chances fell with Oscar Freire (Rabobank) in California; teammate Flecha? Maybe, but it would be hard, he doesn’t have the big sprint and he’s not the kind of rider you let go up the road. 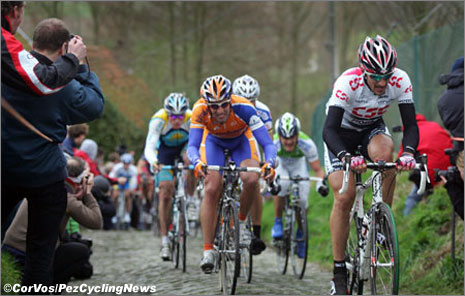 Fabian Cancellara will be in attendance and so will the Molenberg.

Ballan (Lampre) is a man who could win here, but it’s six weeks too early for him; his sights are set on the Ronde and Paris-Roubaix – maybe it will be warmer by then and meantime, Lampre have stayed home!

It’s different for the Belgians, for many their season is really only the next eight weeks. Whoever it is, Pez will be there; and we’ll be happy whoever wins – especially if he’s from Flanders! 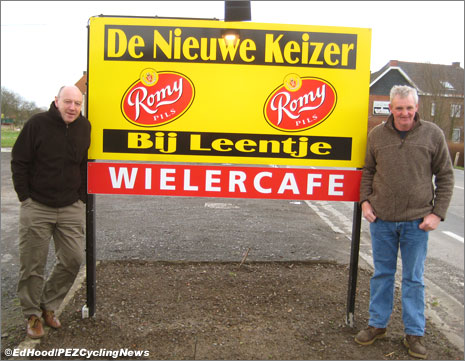 Bikes and beer…could it be any other way?

Pros And Their PowerCranks: Part II