Fleche ’09: After 200km of racing and a nasty batch of Ardennes climbs, Diquigiovanni’s ever-strong Ardennes man Davide Rebellin stamped the loudest on the final ascent of the uber-ugly Mur de Huy to take his 3rd Fleche win.

As expected, the race came down to the final 13 meter climb – the third and final time up the Mur for the day, but unlike the high-speed bunch sprints we often see from a group this close to the line, it was strong men to the front in the always entertaining – if not slow motion – rock ‘em sock ‘em – legs do the talkin’ grind up the nastiest pole in pro cycling finishes. 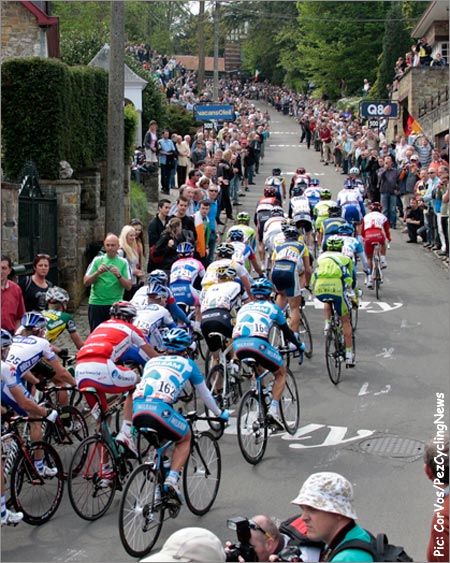 Three times up the Mur and three times lucky for winner Davide Rebellin. 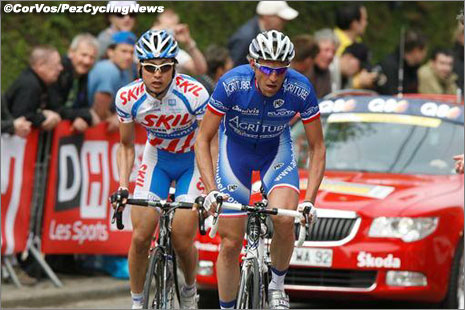 The day’s break went after only 8kms, and featured a return to the front by France’s senior statesman Christophe Moreau (Agritubel) and a refreshing showing of face by Skil-Shimano Fumiyuki Beppu of Japan. They were allowed a portly margin of 15:30 before the bunch started to ride the down. At 78km to go, Moreau went solo, and rode another 53km before rejoining the bunch.

But chapeaus must be given to the pro bunch, as the race was anything but a mid-week ride with a fast finish. Once the day’s break was caught, things lit up with attack after attack across the roads and fields that follow the Meuse River Valley. None amounted to much but not for lack of trying from a variety of suitors.

After a fast single file run along the final 7 km beside the river, it was gruppo compatto at the base of the Mur – strong men to the front please! 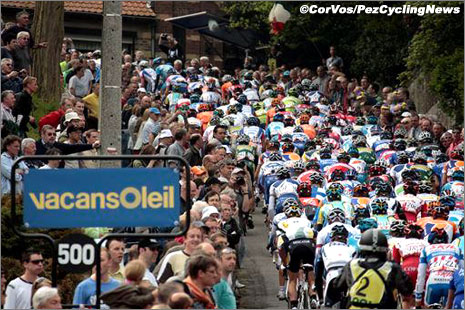 This is the essence of the Fleche, and 1300 meters of the most gripping racing to watch. Even a lead of 10-15 meters means nothing against the 20%+ slopes of the Mur, and things are guaranteed to change right up to the final meters.

First to light the touch paper was Agritubel’s David le Lay, who set off a blistering move on the lower slopes – and gained the aforementioned 15 meters in a heart beat. But seasoned fans watching knew better as did the season pros who beat the pavement behind him. On a climb like this, there’s not much you can do when the likes of Cadel Evans, Andy Schleck, Damiano Cunego and Davide Rebellin have you in their sights. 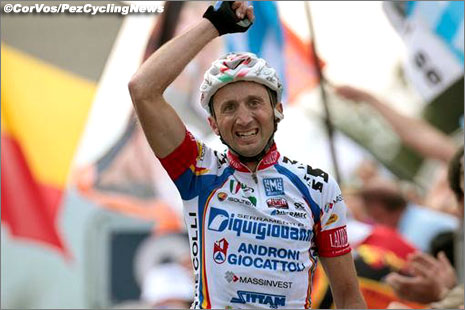 Cadel took over the chase, with the others hot on his wheel – and while Cadel’s trademark grimace showed signs of victory, Schleck the Younger’s effortless effort was more convincing, even if he was only riding 4th wheel.

Evans led the group past Le Lay near 200m to go, only to blow himself when Rebellin surged past and drove to the line, putting daylight between him and the rest. 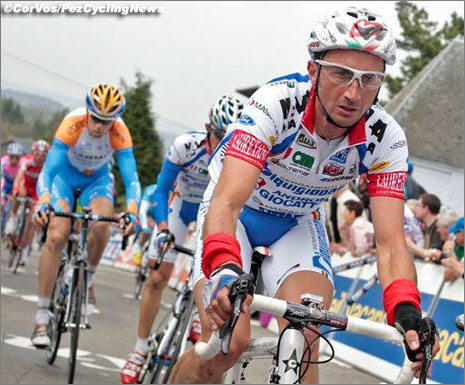 Rebellin looks relaxed on one of the first two ascents of the Mur.

For my money, this is one of my top 5 fave finishes in bike racing and having ridden the Mur myself – I have full and complete respect for these guys who throw themselves like sacrificial lambs for our viewing pleasure. Only the strong survive on the Mur.

Stay tuned to PEZ for our full Roadside Report from Fleche, and lots more as we close in on Liege-Bastogne-Liege this weekend.