“When was your last participation in Milan – San Remo, and what are your memories of the race?” He turns to one of his entourage; “Was it 2002, yeah 2002, but I don’t remember anything about it, I’m not young anymore, I forget things!” Earlier today Lance Armstrong met the press ahead of his return to Euro-racing at tomorrow’s Primavera. PEZ was front row…

But he takes pity on me and works the answer to my question up to say that Merckx attacked from the exact same place all seven times he rode and won. 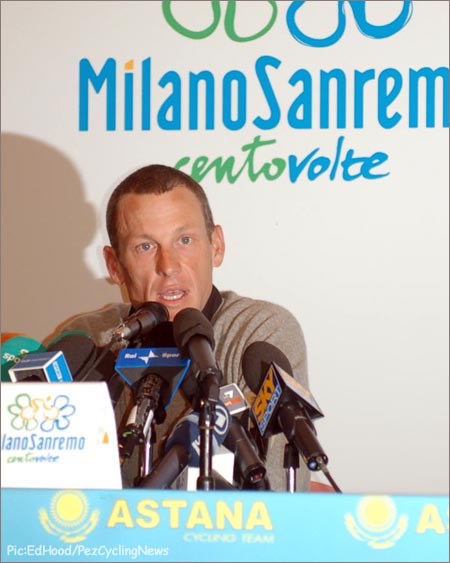 I know that he’s not correct with that statement but I’m not about to correct Lance Armstrong in his own press conference for his first European race for four years.

As he talks, he looks straight at me; his eyes are intense, but not unfriendly. His shoulders are not as wide or square as I remember, but his haircut is still cool; 60’s jazzman.

The Tour Down Under and latter stages in California have given him good colour. The skin on his face is taught; his jaw and cheek bones threaten to poke through to the surface – he’s fit all right.

Strangely for this most professional of pros, there’s not an Astana or Livestrong logo anywhere on his clothing; albeit the table cloth proclaims the name of Kazakhstan’s capital city. He’s wearing a plain grey V neck sweater over a black shirt with blue jeans and blue trainers. 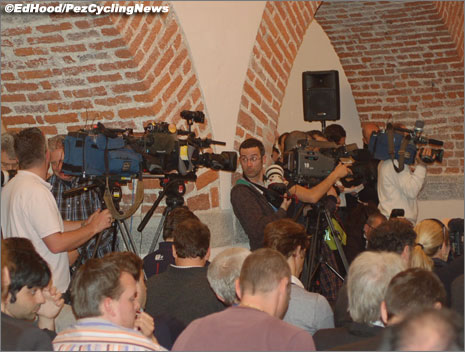 I’ve been to a few press conferences now and except for the craziness of the 2006 pre-Tour ‘Basso, Jan and co go home’ press conference, I’ve never attended one where there was so much anticipation in the air.

The venue was the ancient and beautiful Castello Sforzesco, not far from the centre of Milan and where the 100th Primavera will start tomorrow morning.

The press conference was held in one of the barrel vaulted cellars, a red carpet covered the floor and we sat on ubiquitous red plastic stacking chairs – but a minder guarded the door until the magic hour of 2.00 pm. 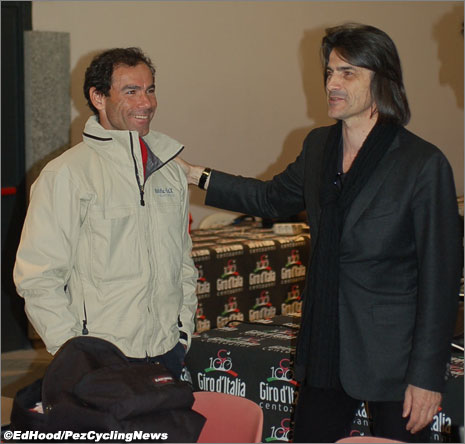 We knew we were in the right place though, when we spied L’Equipe’s cycling writer par excellence, Philippe Brunel giving ex-pro and now TV pundit Davide Cassani, a cuddle. The little Italian is the man who spotted Rasmussen training in the Dolomites when he was supposed to be in Mexico; it’s unlikely that he’ll get a hug from ‘The Chicken’ when next they meet. 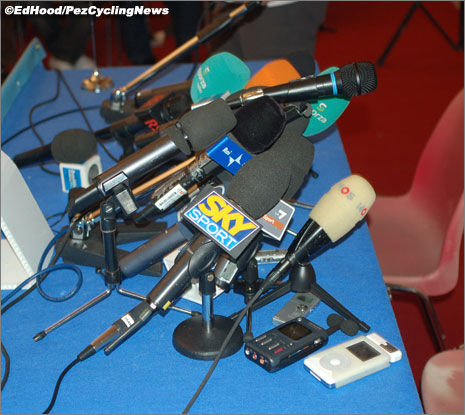 ‘Primo TV!’ came the call, then it was ‘every man for himself’ to grab a plum seat; it should go without saying that PEZ were front row.

A strange flower of microphones grew from the table where the great man would sit and I counted a dozen 50 grand TV cameras pointed at the spot. 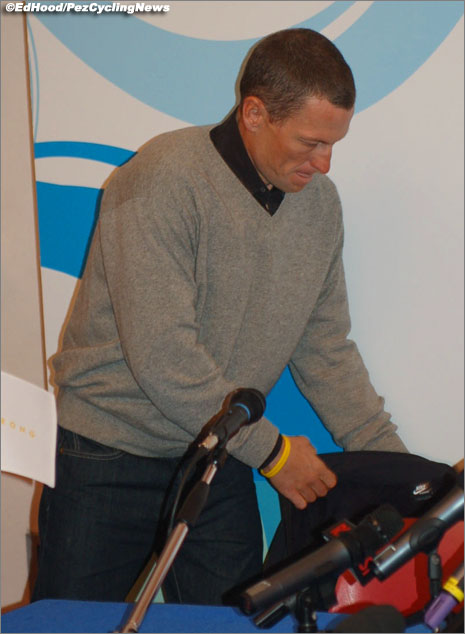 There was a rustle on the left, the paparazzi did their ‘pack of dingoes’ routine and there he was – right in front of us.

A TV guy tapped me on the shoulder and asked if I could remove my big bald head from the shot, he was polite and said “please” so I ducked down a little.

“You guys ready?” was the opening gambit as the shutters clicked in a demented chorus all around us.

He first rode the Primavera in 1993 and had started on six, seven maybe eight occasions – he didn’t remember exactly.
This year he “doesn’t have a lot of ambition, just wants to stay safe.” 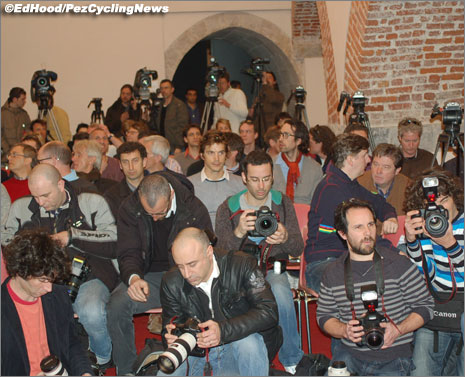 The Giro and Tour, would he try to win both?
‘I won’t be in Italy just for the pasta and gelati!’ and he hopes to be at the top of his game for both.

Someone asks about his ‘criticism’ of Contador as being, ‘too nervous’ he tells us that he’s surprised it took ten questions before that one came up; ‘no criticism intended,’ and Contador will be able to learn a lot from him – that’s for sure!

He doesn’t do anecdotes and the tougher and more political the question, the more he likes it – practising for press conferences in the future maybe, but not in this role?

Does he want to get back to winning races; “we all like the taste of that!”

Who are the favourites for tomorrow? “Boonen, Petacchi, Hushovd, O’Grady the usual suspects,” then he bounces it back to the journo, “who do you think will win?”

His face is expressive, eyebrows lift, lines show on his brow, he tilts his head, shrugs his shoulders, folds and unfolds his arms, most of the time his hands are below the table, but when we can see them his fingers fidget a little.

A German guy asks why cycling in his homeland is in such a mess; ‘the public and sponsors have switched off because of the scandals.” 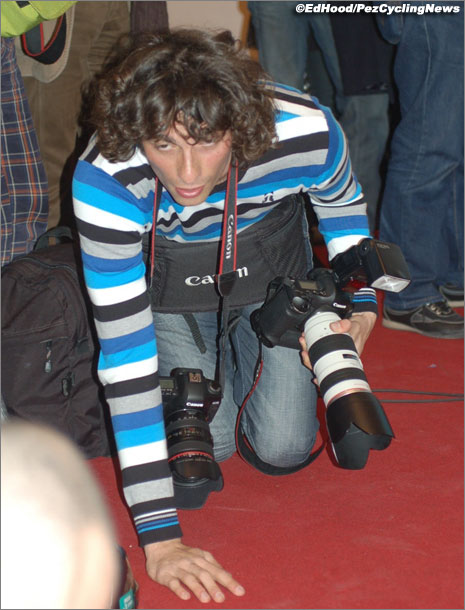 The photographer feeding frenzy has eased, but still they crawl around the floor; maybe there’s a perfect angle just over there?

Martin fires a question about cancer; nobody seems that interested and Lance tells us that he spent time talking to a lot of people in Australia and California, but now it’s “time to focus on the racing.”

Most of the journos have made the effort and there are sports jackets, suits and even a few ties in evidence; the photogs are fashionably scruffy, though – I guess you have to be for all that floor crawling. 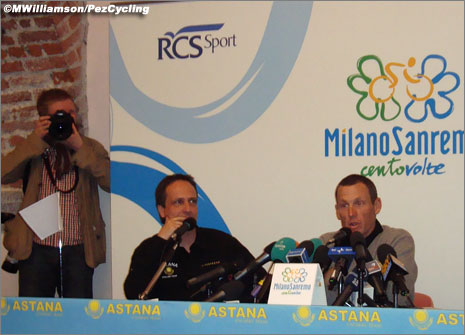 Why did he dispense with the “testing every three days and posting the values on the net?” he tells us it’s cost, logistics and that he’s “already the most tested man in cycling,” sounds familiar.

We’ve turned our BlackBerrys off, but not the Italian journos, they’re too cool for that, “Pronto, si!” they bellow in my ear.

“One more question,” he answers and is gone, like an apparition; no ‘thank you,’ ‘ciao’ or anything else. 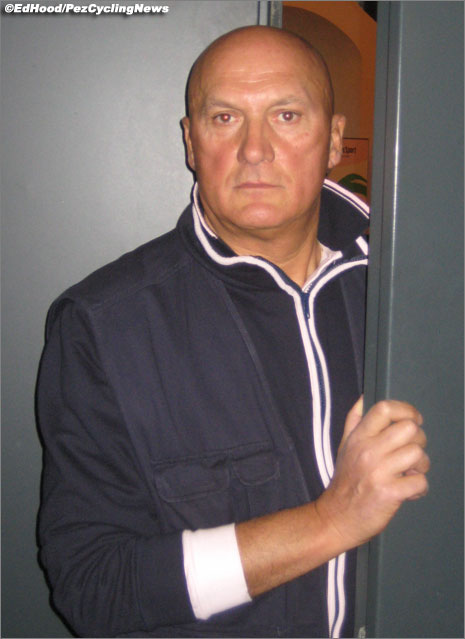 Cool, calm, collected, no nonsense, no small talk, in control, getting the job done – these things came into my mind during the conference.

Do I know any more about Lance than I did before those 45 minutes?