It had to be. At some point, Fabian Cancellara had to win the Tour de Suisse. The only question was when. Well, of course, we have an answer. The kindly organizers gave Cancellara a Christmas present in June this year with two time trials and only a moderate voyage through the mountains of possibilities in Switzerland’s Alps. Indeed, Cancellara made the most of his chance and obliterated his opposition.

With one more day left to race at the Tour de Suisse, there was little doubt of the final outcome. Fabian Cancellara was 4 seconds down on Tadej Valjavec, and there were 37 kilometers of time trialing to go. The proverbial sacrificial lamb had a better chance. 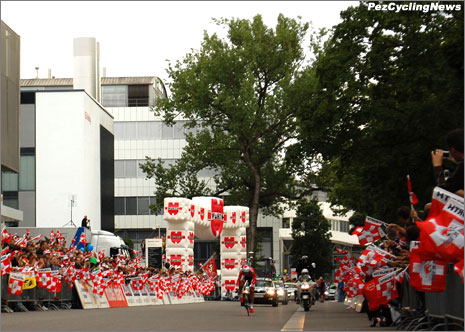 Ok, so my lens isn’t of the high-powered variety, so you’re going to have to live with a small Fabian.

On a cool, overcast day in Bern, the hometown of Fabь (as his Swiss Army of Followers has named him), Cancellara showed that there isn’t a soul that can keep pace with him when he’s on form in a time trial. It’s just a fact, like water is wet. Standing at the start amid the thousands of howls for Fabь! Fabь! Fabь! I just couldn’t help but get excited for the performance that was about to come. 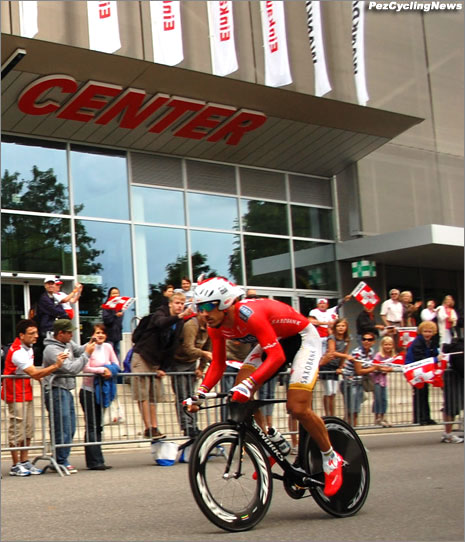 The difference in speed between Cancellara and everyone else after only 300 meters was shocking.

As the seconds ticked down to his start and the cacophony of thudding hands on the barriers reached a climax, Cancellara shot out of the starthouse, took that first right hand turn, and by the time he passed my gaping jaw, he was already rolling at well over 50 kph. Just over 10 minutes later, he hit the first time check, and he was already nearly 30 seconds up on the previous best time. This was the stuff of legend. 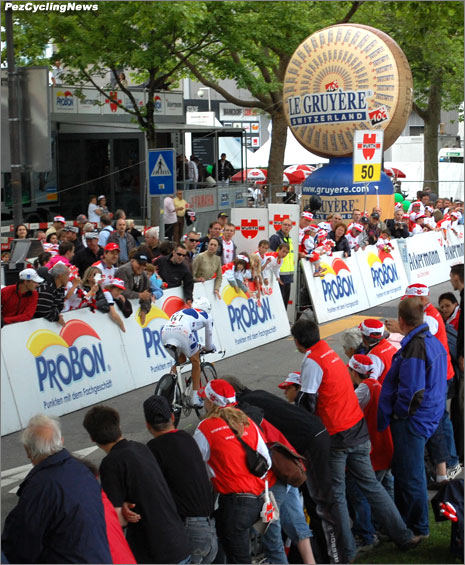 Wьrth was a big sponsor of the race, and made sure everyone had tshirts, hats, and flags. Notice the red and white everywhere throughout the pictures.

Have you ever watched someone doing something that you’re certain they were born to do? I got that feeling watching Cancellara on his two lap flight around Bern. The man is in no way a picture of smoothness. He’s no silky artist as some would desire to see on a bike, but it’s just not possible with Cancellara. The man pours forth a level of power with which few, if any, can relate to. 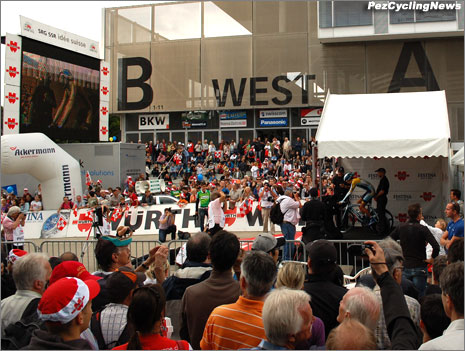 The starting area was a madhouse leading into Cancellara’s start time. That’s Kloden getting ready to go.

When Cancellara is on, he gives the impression that he could do damage to either crank or bike – and not because he’s a big guy, but because he’s that powerful, because his two legs explode downward with material compromising force with each revolution. You know that oft-used phrase, poetry in motion? Cancellara was a poem in power. He is beautiful on a time trial bike. 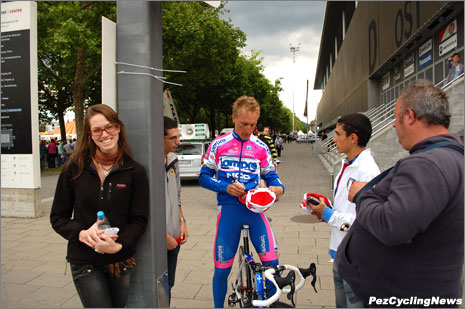 Enrico Gasparotto made the mistake of trying to just roll on by. He was swamped by autograph seekers…and Ashley.

There Was No Doubt
The final result of the Tour de Suisse was known well before Cancellara ever ascended the steps to the starthouse in Stage 9. When Cancellara made it over yet another middling mountain in Stage 8, and was only four seconds behind AG2R’s Slovenian climber, Tadej Valjavec, the deed was done. 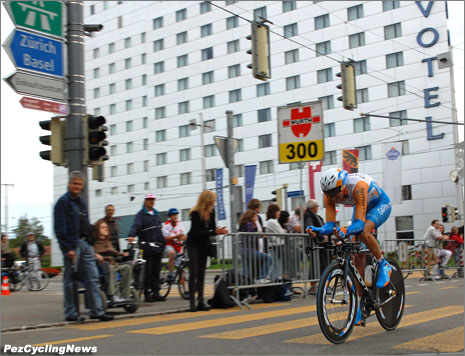 The only question was what the damage would be on Sunday. It wasn’t even fair. Poor Valjavec started the final stage in Yellow, but rode himself right out of the overall top 5 by way of his 59th place ride on the day. Thankfully, Valjavec didn’t have Cancellara snapping at his heels. 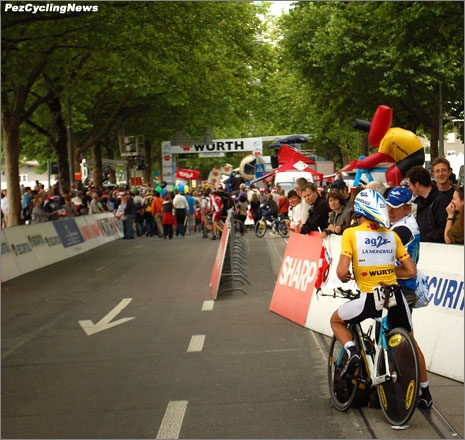 The Yellow Jersey of Tadej Valjavec couldn’t even get back through the rejoicing hordes after finishing. He was utterly forgotten.

At least he was saved the ignominy of being caught by the thunderous red shark. That honor was saved for 2007’s overall winner, Roman Kreuziger. Kreuziger was caught on the line by Cancellara. The image of Kreuziger crossing the line, head down, exhausted on the one side of the road, and the red-clad Swiss Champion, Cancellara, with arms held high in triumph, will be a lasting image from this year’s event, perhaps the whole season. 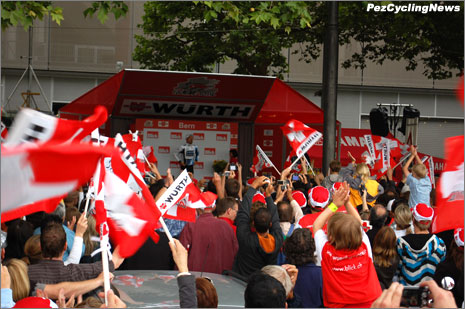 We didn’t get to see it though. We were camped about 200m after the finish in hopes that Cancellara and the top few riders would continue on, and we would of course get some really cool footage of the exultant Fabian Cancellara. 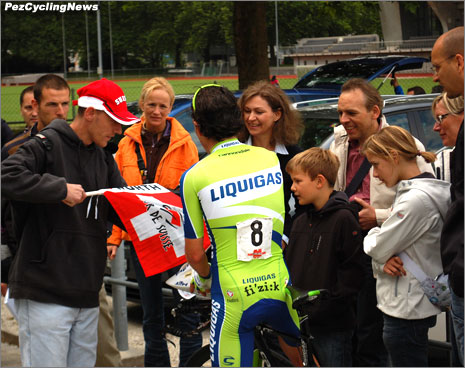 Homeboy Oliver Zaugg was met by a mob of friends, family, and autograph seekers immediately after finishing. We could hear him still trying to catch his breath and answer questions at the same time.

Our plan worked for a number of riders, but it fell woefully short at the very end. The final few finishers all crossed the line, and then did an immediate u-turn. We were left waiting like suckers, but it was still worth it. The next time you watch a time trial in person – consider waiting a little ways down from the finish. You’ll most likely be pleasantly surprised. 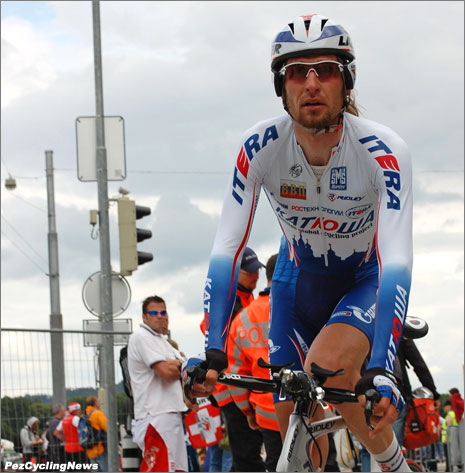 Russia’s Vladimir Karpets rode to yet another solid minor stage race finish. Will he be able to step up to the highest level of contender soon?

Wrapping Up The Tour De Suisse
Cancellara’s ride was absolutely impressive. It hearkened back to the days of Miguel Indurain – maintain in the mountains, humiliate in the time trials. It’s a winning formula, but it doesn’t make for thrilling bike racing. Fortunately, an entire team stood up to bear the weight of entertainment in Switzerland: Columbia. Columbia put on a display of stage stealing prowess not seen in quite some time. 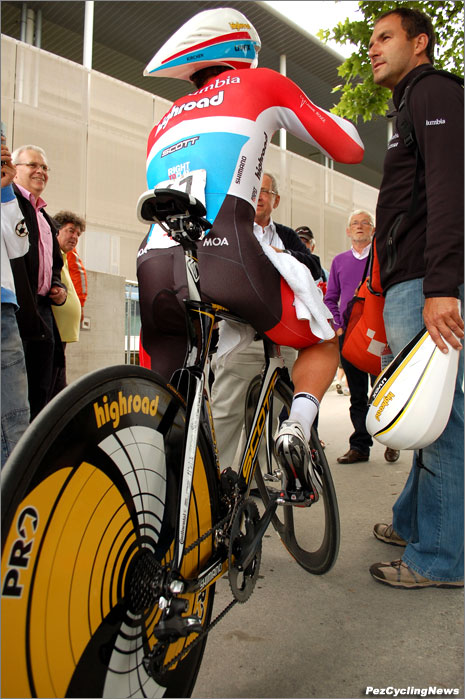 Moving away from the fairy tales of Cancellara and Columbia, a hard fact became apparent over the nine stages of the Tour de Suisse. The Tour de Suisse cannot live up to the expectations of its big brother, the Dauphine Libere. It’s just not in the same class of races. The Tour de Suisse is a great race with great racers, but if you’re looking for a stand alone event that shows off the best of the best just a few weeks shy of top condition – you turn to France in both June and July, not Switzerland, but therein lies the beauty of the race: its humility, its soft-spoken nature. The Tour de Suisse will not wow with huge mountain stages and epic time trials. It tests, pushes, prods, but never bludgeons. 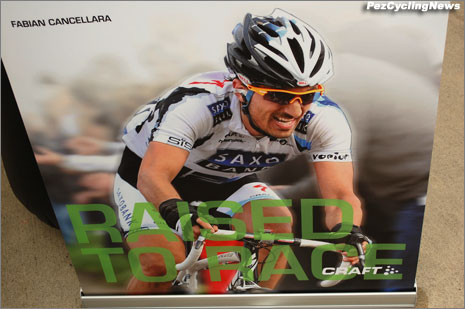 Can’t manage to see Cancellara in person? Too many people between you and the podium? Never fear, he’s on posters, ads, and pictures all over the place.

I like the Tour de Suisse. I liked the layout of the course this year. I liked the subtleties, the continual toughness of the stages, but never taken to the extreme. Intentional or not, it seems the parcours was designed specifically for a rider like Fabian Cancellara. 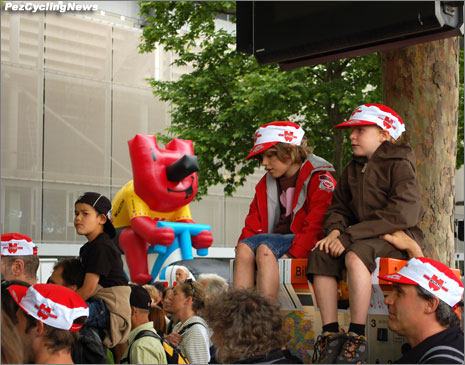 The kids always have it best. They’re like little squirrels, always managing to get the prime high spots.

Sure, there were mountains, you’re never far from the mountains in Switzerland. There were even some big ones (the Gotthard or the Arlberg for example), there were some steep ones (Serfaus), but none coming in such a way as to ever really put Cancellara into difficulty. Mont Ventoux, Izoard, Galibier? You have to be kidding me. The two main summit finishes this year at the Tour de Suisse, the first in Serfaus, Austria and the final classic climb of Crans Montana in Stage 8, are not even in the same galaxy of climbing as France’s Hall of Fame ascents. 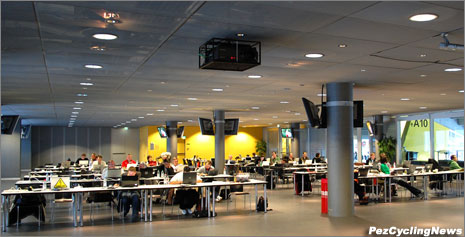 In my opinion, there isn’t a more depressing scene at a bike race than the amassed writers waiting for a stage to finish.

Serfaus had good prospects, but at only three and some change kilometers, the steep fiend was not enough to get rid of a rider like Cancellara, who has shown that he can get over nigh anything save the meanest climbs when he’s on point. Crans Montana is a nice climb, but it’s laughable to think that there was going to be anything less than a fair-sized group coming to the finish on a moderate, highway grade climb like that. 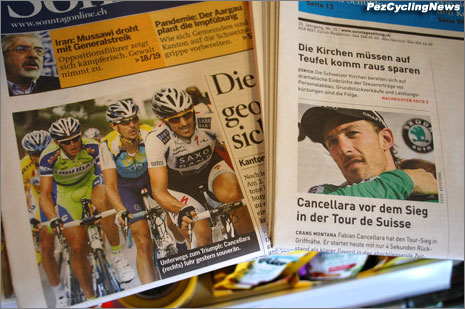 There wasn’t a newspaper in Switzerland, it seemed, without Cancellara’s visage on the front.

Isn’t that the goal of a pre-Tour prep race though? By definition, the races seek to test the upcoming Tour de France riders in each of their disciplines: sprints, mountains, and time trials, but without taking them too deep. It can be argued then, that what I’ve insinuated as a push-over course was just right. The Dauphine has been notorious in the past for pushing the prepping Tour riders too far, but this year’s Tour de Suisse? I think it was just right. The perfect pre-Tour prep race should conceivably see a rider like Fabian Cancellara to the fore. Is the goal to bring the riders forward in their progression to Maillot glory at the Tour, or is it to have a stand alone amazing race? If the goal is to put together arguably the best stage race right below the level of the Grand Tours, then the Dauphine has it just right. If the goal is to bring the riders steadily forward toward a jersey or stages at the Tour de France, then the Tour de Suisse seems to have found the right formula. 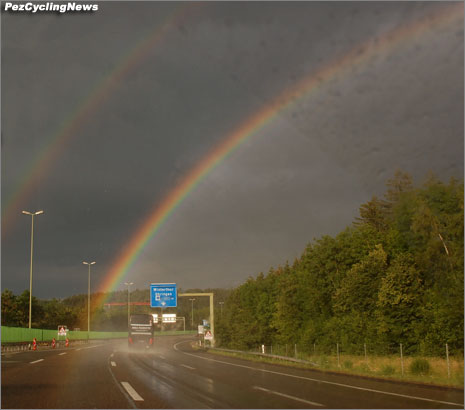 We drove right through a rainbow on the way home. I now know, for sure, that there is no pot of gold at the end, or beginning, of a rainbow. Then again, maybe this was a dud rainbow.

Looking for more pictures? Head on over to Flickr for much more.

Book Review: The Heron And The Icon