TDU’09 Cancer Classic: Robbie Is Back (Lance Too)!

Sunday’s Tour Down Under ‘Prologue,’ the Cancer Classic Criterium, was held over 30 laps of the 1.7km Rymill Park course in the city of Adelaide. As Adelaide continues to suffer Lance-mania, 140,000 people crammed onto the circuit to see if the great man still had it. He rode just fine, but the real story was at the pointy end of the race, and the man across the finish line first was none other than Katyusha’s Robbie McEwen. 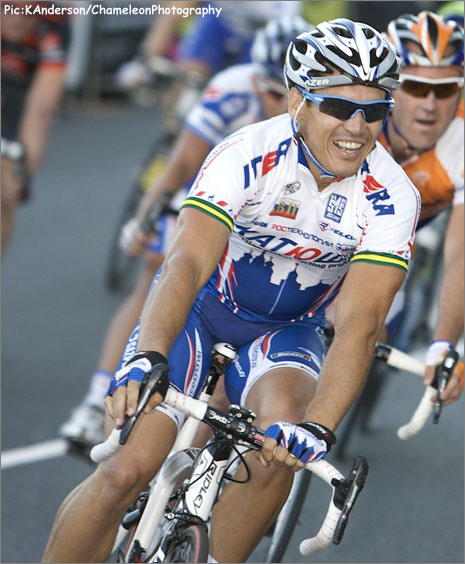 Robbie McEwen was the happy fast man to cross the line first. McEwen gets the honor of nabbing the first win of the season (and ever) for his new Katyusha squad.

Let’s head back to the start first and take a little look around, shall we? 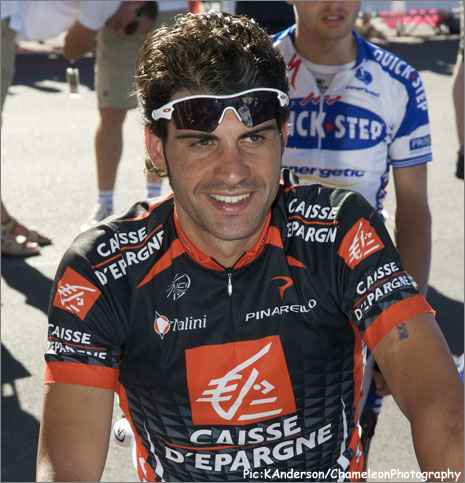 As a ProTour event, the Tour Down Under has pulled in some serious names: Lance isn’t the only Tour de France winner in attendance. Say hello to Oscar Pereiro! Pereiro is making his own comeback after a horrific crash (remember?) at the 2008 Tour de France. 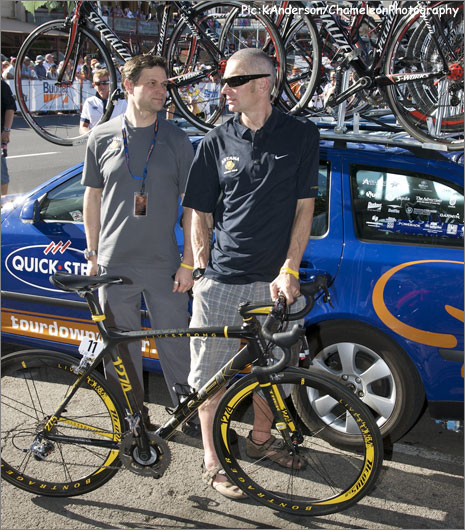 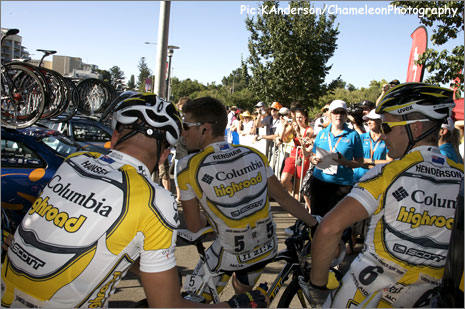 The yellow-clad Columbia boys enjoy the shade before the start in Adelaide. 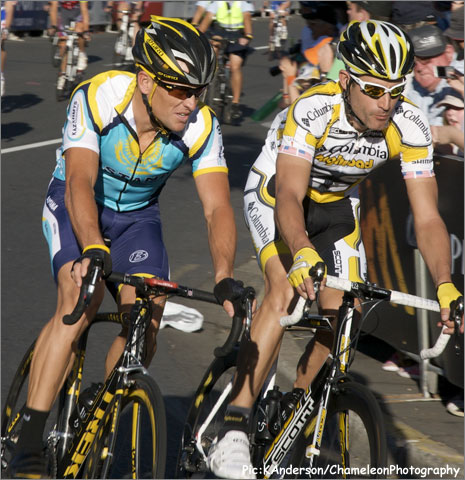 LONG-time teammates (and I mean long-time) Lance Armstrong and George Hincapie share a chat whilst warming up before the start. I’m know historian, but Sunday’s race had to have been the first time in many, many moons that Hincapie and Armstrong were not racing on the same team. 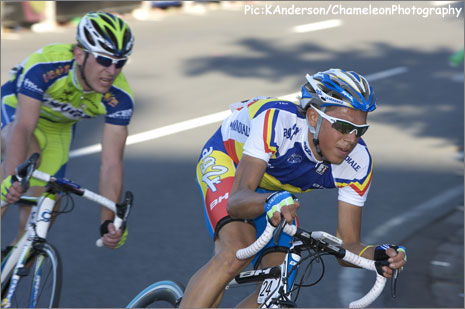 Alexandr Pliuschin, the AG2R Moldovian champion was in a prominent break. 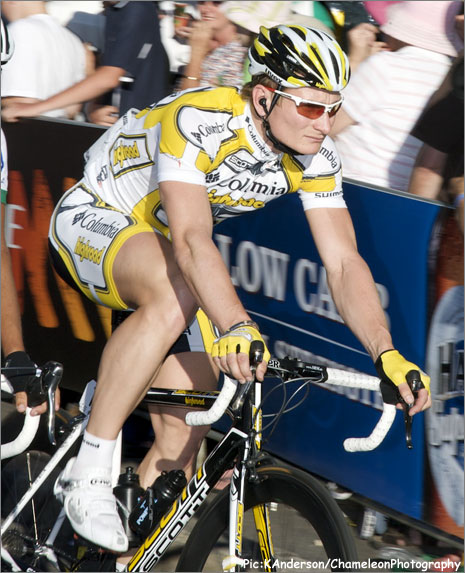 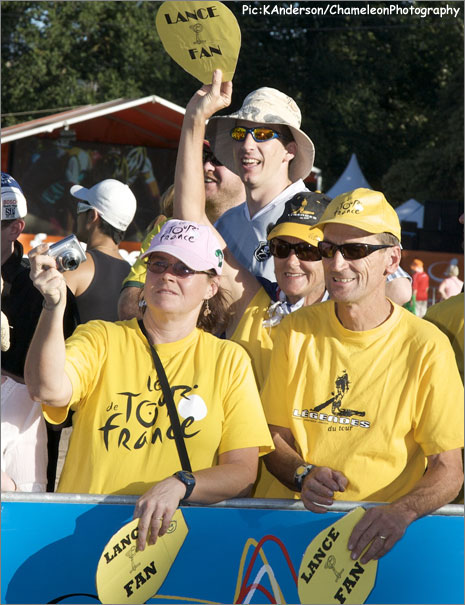 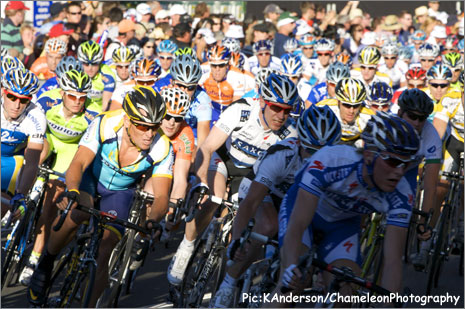 Jens Voigt gets his season started quietly alongside some other guy. 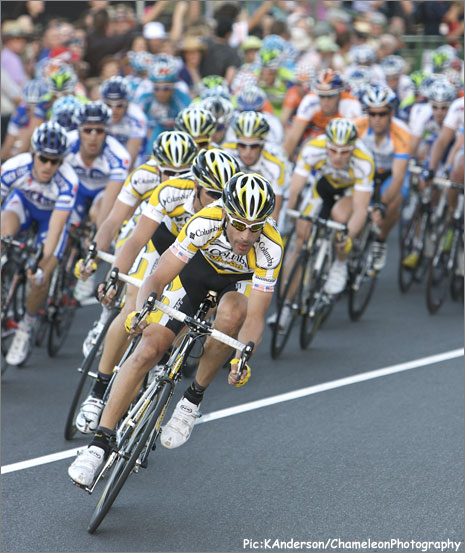 Columbia tried hard to set it up for Greipel in the finale, but McEwen was just too much. 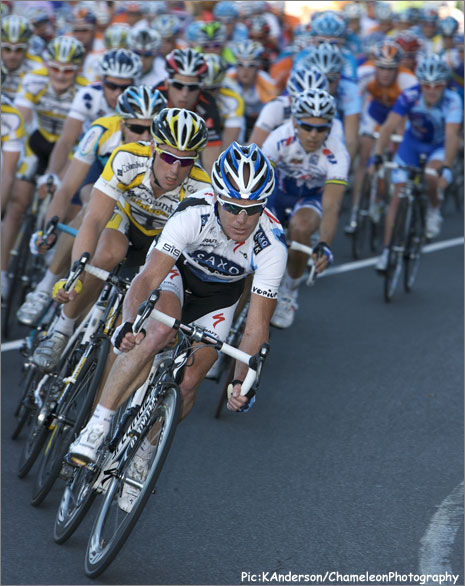 Saxo Bank made a hard push as well with Stuart O’Grady doing some serious man pulls on the front. 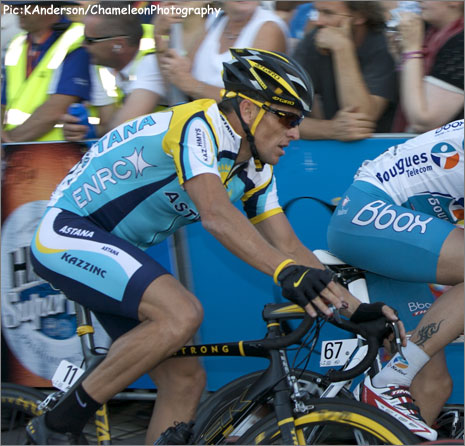 …While the race raged at the front, Armstrong got used to that racing feeling again and rode as anonymously as it is possible when you’re name is Lance Armstrong.