Stage 3 of the Tour Down Under proved to be a very exciting day of racing thanks to the challenging climatic conditions. Unlike the last few days where the temperature has been the key, the buffeting winds along the Fleurieu Peninsula dictated today’s action. By the end only 47 riders were left, and it was Graeme Brown who trumped ochred Allan Davis and Stuey O’Grady for the win.

A crash early in the stage saw a major split in the field and left defending champion Andre Greipel in hospital and race leader, Allan Davis on the defensive. At near enough the same time in the stage the first decisive break of was formed. The group of 15 contained a number of big hitters including, David Moncoutiй (Cofidis), Lance Armstrong (Astana), Michael Rogers (Team Columbia – High Road), Matthew Lloyd (Silence – Lotto) and Stuart O’Grady (Team Saxo Bank). 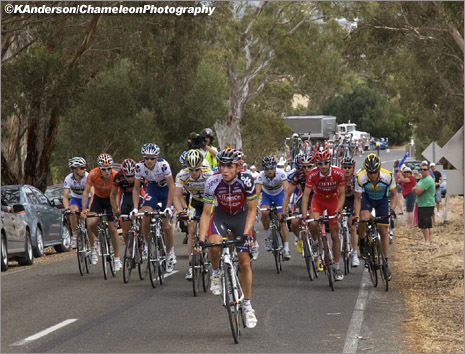 The early 15-man move contained some major horsepower and made for some hard times for the riders in the chasing field behind.

On the first climb of the day, Wickhams Hill, we witnessed the race split into 4 groups, with the escape group holding about a 90 second advantage to the peloton which contained approximately 50 riders. Both Garmin-Slipstream and Rabobank were keen to bring back the dangerous group and made a concerted effort that led to the two lead groups combining with 35km to go. 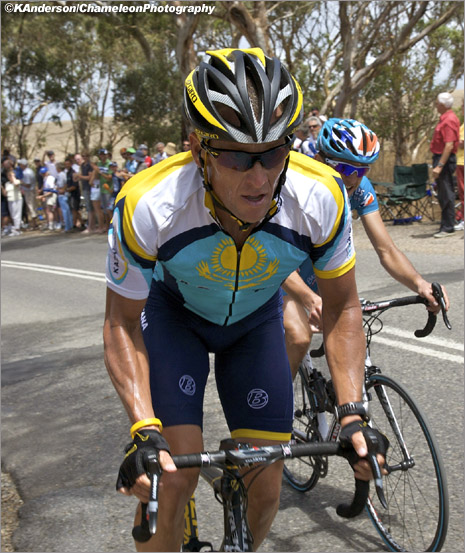 Armstrong made the big break of the day and everyday we’re reminded that it really isn’t overkill to talk about him all the time.

The second time we saw the race was on top of the exposed yet beautiful Crows Nest Road climb. 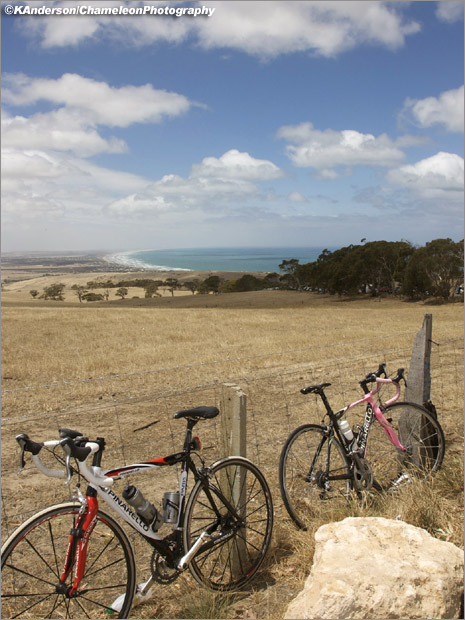 To give you an idea of the wind strength, the race officials made the decision not to put up the KOM arch (probably because it would have ended up 5km away…). At this point of the stage, PEZ’s pick for the stage Cameron Meyer (Garmin-Slipstream) was out on the attack. 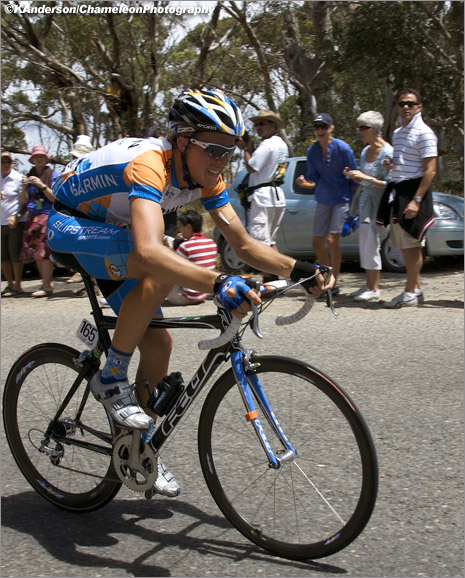 Garmin definitely did their homework when they picked up Cameron Meyer – he’s not a star for the future, he’s a star for right now.

What made this attack even more flamboyant was that Meyer crashed yesterday and dislocated this shoulder. Due to the recurring nature of the injury, Meyer can pop it back in and was able to complete yesterday’s stage. Meyer put this TT pedigree to good use to stay away until approximately 5 kilometres to go. 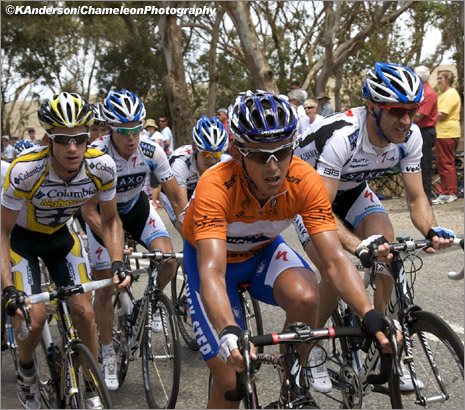 Allan Davis had a wild day in Ochre (he hit the ground hard early), but managed to just barely hold on to his overall lead over Graeme Brown.

By the time the race reached Victor Harbor a bunch kick was on the cards. The end result was an Australian trifecta with Graeme Brown rewarding his Rabobank teammates for the efforts throughout the day. 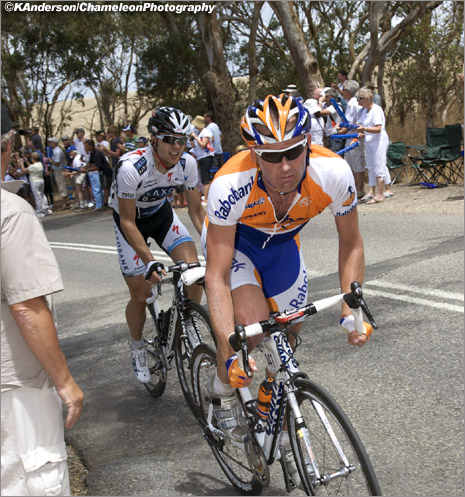 Brownie repaid his team’s massive effort with the win.

As mentioned yesterday, the Unley street party was the place to been seen last night. We were greeted with a multitude of street vendors offering all sorts of goodies. With a Coopers ale in hand, we were entertained by street performers as we wandered through the crowds. My pick of the evening was mini bike riding performers who heckled me whilst attempting to take focussed pictures in the fading light. 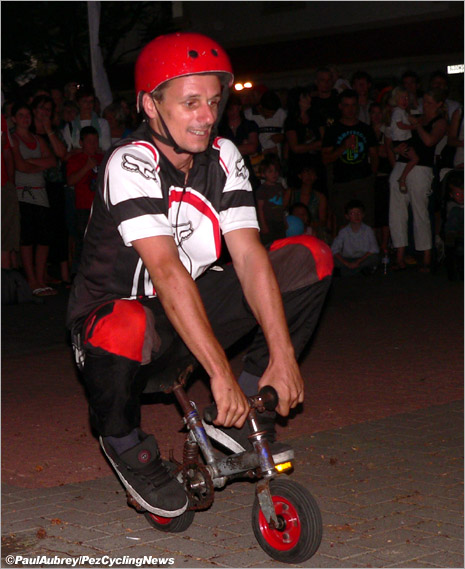 It wasn’t all fun and games though. I had a bone to pick with a gallery curator who claimed he had Stuart O’Grady’s Paris-Roubaix winning bike on display. In my inebriated state I came up with a series of reasons why it wasn’t THE bike that WON the cobbled classic.

1.The deep section rims were not Zipp and everyone knows that the pros ride box section rims (well, at least they used to);
2. CSC riders use FSA cranks not Shimano;
3. The bike did not sport Alpha Q forks as they did in 2007;
4. The steerer tube was uncut;
5. There were no ceramic bearing upgrades; and the dead giveaway was:
6. The manufacturer’s safety sticker on the top tube.

The next morning we returned to the Unley for the stage start. Un Caffe Bar outside the sign-on was the focus of today’s coffee challenge. As they served Illy coffee I couldn’t resist, but in hindsight I should have given it the miss. The espresso was OK but felt watered down. The service was very slow, the management obviously had not planned for the influx of people with only one barrista working the four cup machine, 3 out of 5. 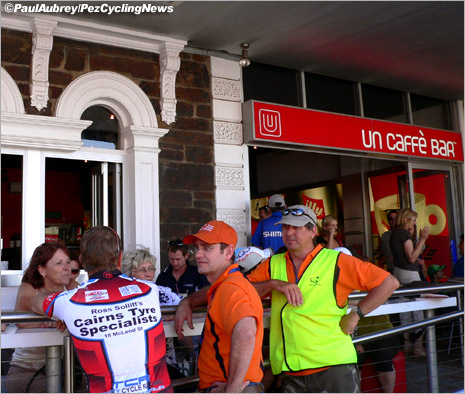 I was thankful to wander down inside the barriers as the crowd was again huge. In a sheer stroke of luck my camera was on as Lance rode past with a police escort. In true paparazzo style I held down the shutter and pointed the camera in his direction. I was more than happy with the outcome. 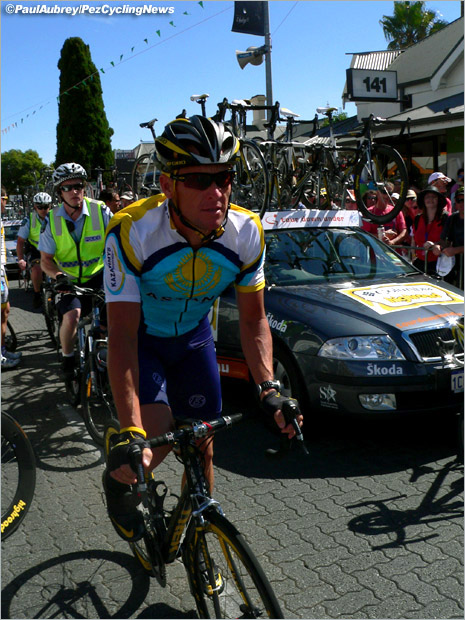 Just before roll out I was lucky enough to chat up with Timmy Duggan of Garmin-Slipstream. I am a massive fan of the argyle kit and could not resist sharing with you his uber bling custom argyle D2 shoes. 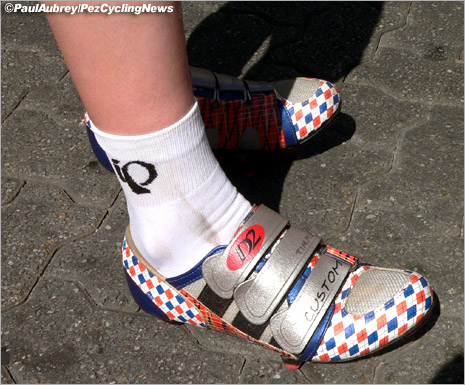 At the second KOM I caught up with Mark, a character who is always riding up the climbs of the TDU. It turns out Mark loves to challenge himself on the climbs and took great pleasure telling me he rode 5 repeats of Checkers Hill on Tuesday. 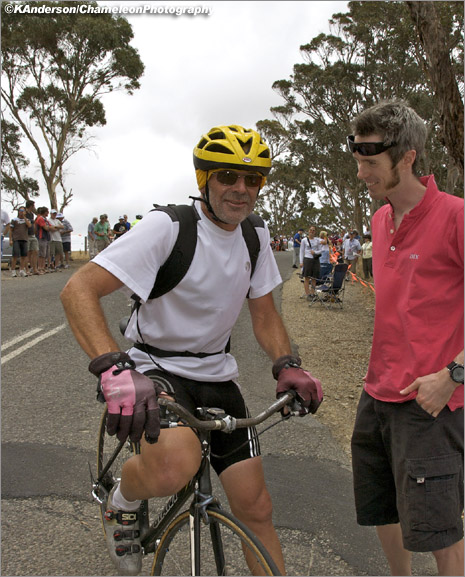 To be honest, the bike Mark rides drew my attention to him. The bike has an eclectic mix of parts. The frame is a carbon Giant number, the cranks are 180mm retro Campy running a single chain ring. The bars are best described as eye catching. When discussing the wheels I learnt that he has manufactured his own carbon wrapped hub, and laced this to a tubular rim. I wish Mark all the best tomorrow as he will take the challenge of riding the complete fourth stage through the Barossa Valley.