After yesterday’s tough stage, the racers were looking forward to a more laidback ride as they ventured into the Barossa Valley. An early break plowed the leading furrow, but once again, it was not meant to be. The sprinters’ teams amassed and another bunch sprint was had. Allan Davis was first across the line ahead of yesterday’s winner, Graeme Brown. 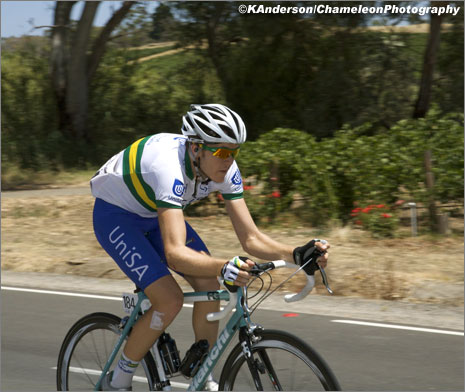 Travis Meyer made sure to remind us today that Cameron wasn’t the only Meyer with a bright future.

It was good to see that Travis did not let his brother Cameron steal all the limelight for the family at the TDU. The break claimed both of the day’s sprints, which meant the time bonuses did not impact the GC. 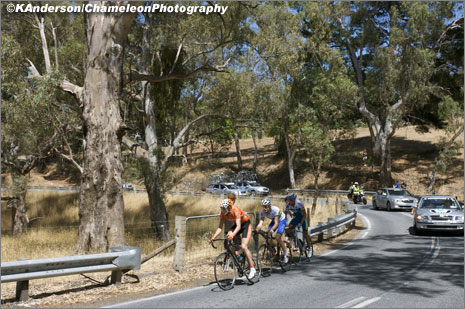 The break enjoyed a long, hot day out front.

By the time the race reached the only categorised climb of the day, Menglers Hill, Lafuente had made his way back to the bunch. Efimkin and Meyer continued to elude the main field and were eventually caught with 10 to go by a chase led by Katusha. As has been the case so far in the TDU a bunch kick was going to decide the podium places and allocate the valuable time bonuses. Race leader Allan Davis retained the leader’s jersey by claiming the victory ahead of yesterday’s winner Brown, with Rojas rounding out the podium. 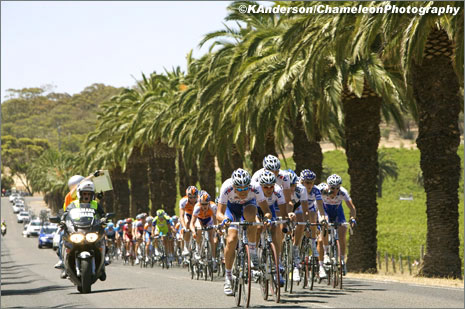 Katushya did a worthy job of chasing, but there would be no reward for the team at the end of the day.

Tomorrow’s stage with 2 ascents up Willunga Hill, will decide the outcome of the race. There are 38 riders within 39 seconds of the race lead. It would be fair to say that the overall winner would come from this group. With names like Armstrong, Hesjedal, Hincapie and Pereiro in this group the racing should be enthralling. The PEZ team will enjoy a picnic at the top in order to secure front row seats for the festivities. ( Just don’t tell anyone else our plan.) 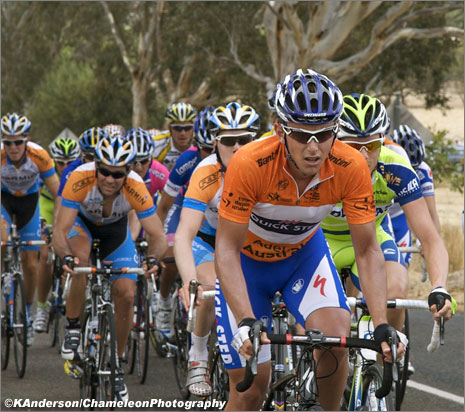 Albie made it two in three days with his win in Angaston.

Today the PEZ team car was blessed with the company of three lovely ladies. Whilst my dear wife Claire went to pick up Laura and Chloe, I ducked down to Cibo’s for a coffee. There are a number of Cibo cafй’s throughout Adelaide. As the story goes, Cibo started as a restaurant in North Adelaide but soon learnt that coffee was more lucrative than food. Just to prove that I am not a coffee snob that can never find a good coffee, I enjoyed my espresso today and the service was good as well, 4.5 out of 5. As an aside I did enjoy their gelato earlier in the week as well. 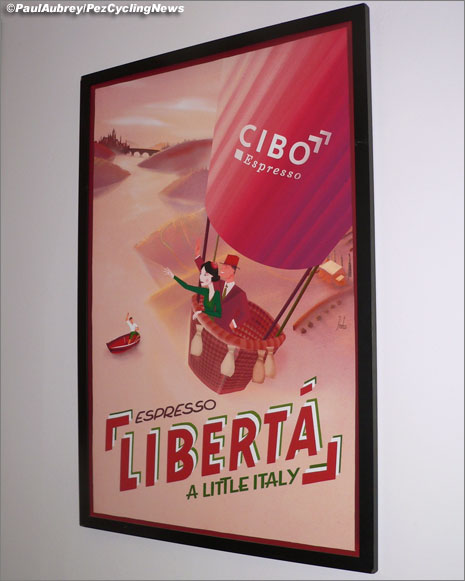 Throughout the week we have been playing the game Pro or No-Pro. The game started as spot the pro cyclist and morphed into spot the pro or unprofessional behaviour.

Pro: Laura navigating and my driving that allowed us to catch a bonus viewing of the race at the intersection of Gorge Road and the Adelaide to Mannum Road.
UnPro: The hundreds of people who, through mob mentality, grouped together to watch the race on the wrong section of the Adelaide to Mannum Rd and missed the whole thing. I pity the mothers who had to break it to their kids that they weren’t going see their heroes. 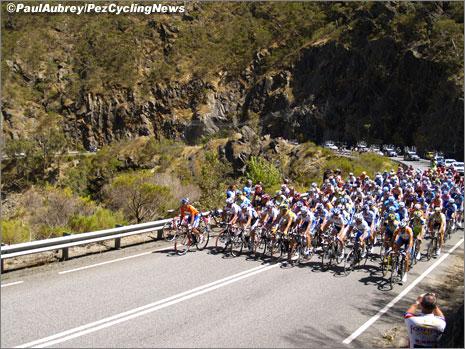 The field enjoys a climb on the Gorge Road.

Pro: Sun Screen, sunglasses and hats in the Australian sun.
UnPro: The Euro soigneur who was sleeping topless on the top of his team van in the feed zone. I hope his doctor knows what skin cancer is….

Pro: Any driver who knows that the green light van means that the road is no longer closed.
UnPro: All the drivers who had to be forced off the road by the police as the last few groups rolled into Angaston. 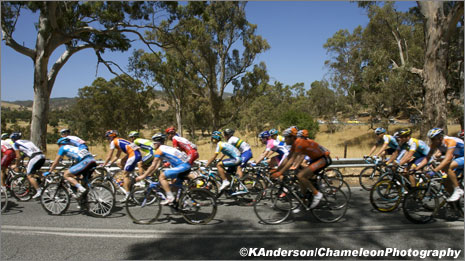 Shade is always a hot commodity during the Australian summer. 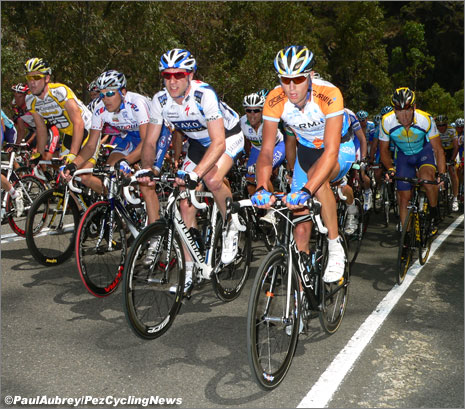 The head of the field climbs.

1. Telling team PEZ “You can’t park there, the riders WILL hit YOU.” We listened and did a U-turn as we thought she was important.
2. Continuing to run down the hill and tell people the same thing. Wish someone had said: “who are you anyway? Massive lenses don’t qualify you for media creds.”
3. Telling some poor spectator that the race director was honking his horn at them for standing on the road when he was clearly nowhere near the edge. The horn was in fact a reaction to a rider taking an unusually long time to accept a bottle from his team car. Is this your first bike race honey?
4. Retelling the above story about the recalcitrant spectator to others in Angaston for kudos. Go back to wildlife photography where the animals don’t have to talk to you.