Saturday’s fifth round of fighting was always going to be the decisive stage – the only question was: how selective would it be? Word on the street is they are tough, but not hard enough to ensure a select group will make it to the finish before the peloton. Word on the street was correct: Allan Davis took his third stage and the overall is his! 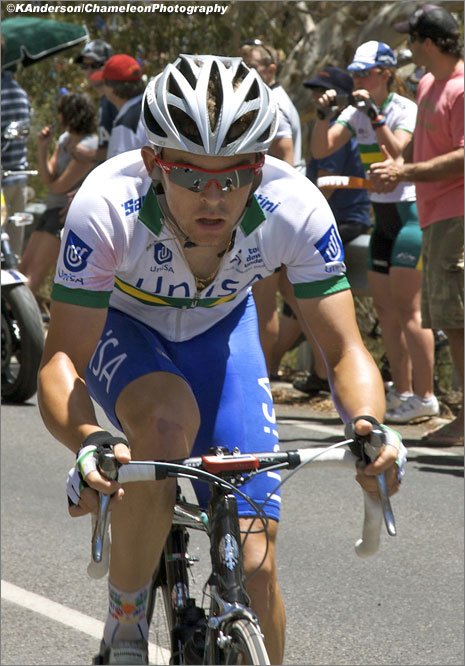 Jack Bobridge is enjoying a torrid January – he swept the Aussie U23 Championships and his TDU has been nothing short of sensational.

On the early laps around the beach the group extended their lead to up to 3 minutes. By the time the race reach Willunga Hill for the first time there was some action in the group. Serguei Klimov (Team Katusha) and Jack Bobridge (UniSA) had attacked whilst the peloton split into pieces on the climb. 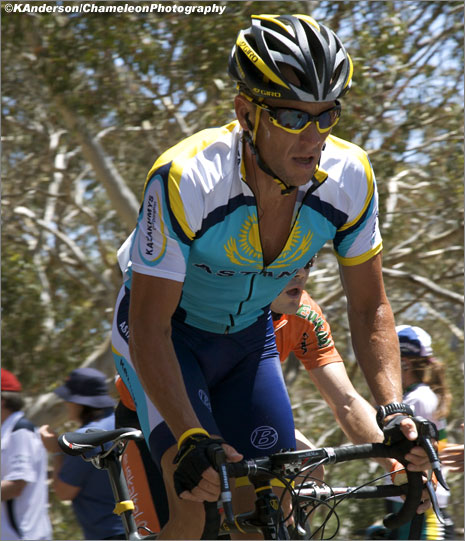 Armstrong was once again comfortably in the lead group, but like most of the other riders within a minute on GC – he might as well be 10 minutes in arrears. This is Albie’s Show.

Bobridge obviously was spurred on by the home crowd, his name was painted all over the length of the climb. On the descent back into Willunga, Klimov and Bobridge held a slender 50-second advantage over the chase group containing all the GC riders. By the time the race begun to climb Willunga Hill for the second time David Moncoutiй (Cofidis) had escaped with Matthew Lloyd (Silence – Lotto) in hot pursuit. 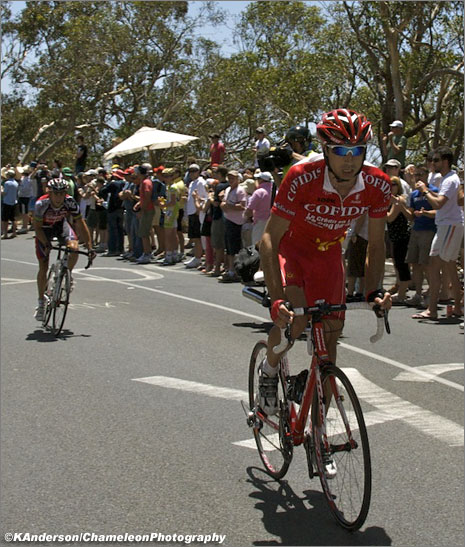 David Moncoutie and Matthew Lloyd put on a fine show the final time up Willunga Hill, but there was no denying yet another sprint finish.

Through the KOM for the second time the contenders were split into 3 groups with only seconds separating them. On the descent the groups reunited whilst Michael Rogers (Columbia) made the last solo bid for victory. The riders were all together as the race approached Willunga for the last time, Allan Davis stamped this authority on the race by taking his third stage victory and securing the Ochre Jersey going into tomorrows final stage. 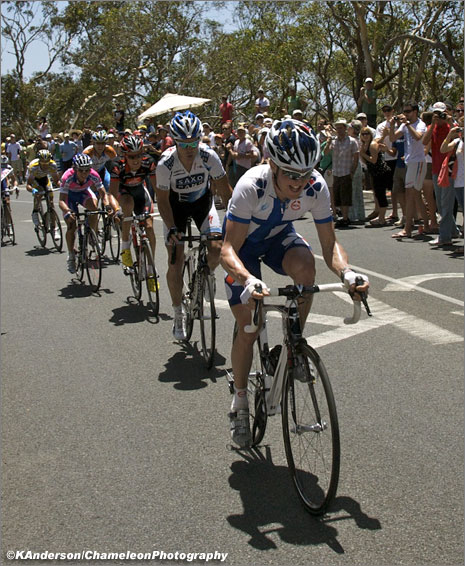 Right behind, the chase was on: FULL gas. 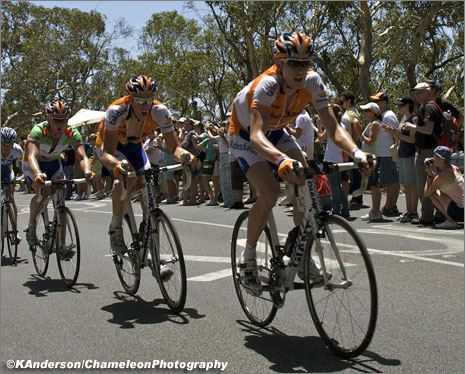 A little ways further back, Graeme Brown and his Rabobank legionnaires were desperately trying to regain contact with the front. 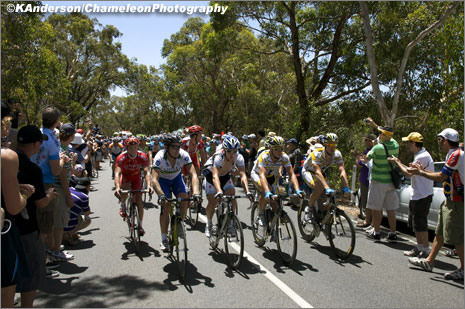 Still further back in the laughing group, the goal was a nice, even tan.

Getting to the race was a bit of a challenge as the traffic was crazy, nothing like the other days. Getting off the expressway ended up as a 5km traffic jam. Our conservative plan to only see the race on the hill worked out well, though not as exciting as usual. We got to the KOM as the race started but that didn’t have much of an impact on the crowd, as it was as big as any other day. However, as the day went on the crowd grew and the atmosphere was relaxed and party-like. We were set with a good spot, picnic and a paper to pass the time. 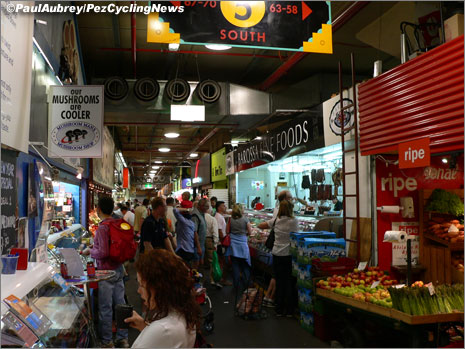 One of the best parts of coming to Adelaide is the market located just behind the race village. Let’s face it, cyclists like food and the stalls have every sort of goodie you can think of. Throughout the week we have sourced delightful fruit, cheese, bread and pastries to keep us from going hungry. With massive crowds expected on Willunga Hill, we made sure we had everything we could think of to set us up for a long day waiting for the race. 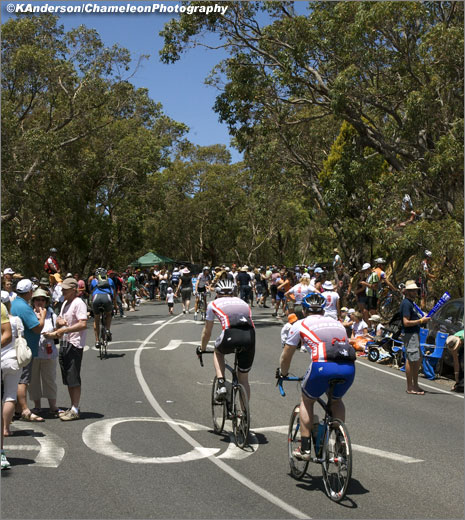 Whilst at the markets we decided to call in at an Adelaide institution, ‘Lucia’s’ for breakfast and coffee. The food was fantastic as was the coffee. In hindsight probably a bit better than yesterday’s brew but I will give it another 4.5 out of 5. And whilst enjoying the coffee, I stumbled upon the clear winner of blingest bike of the week owned by Will. 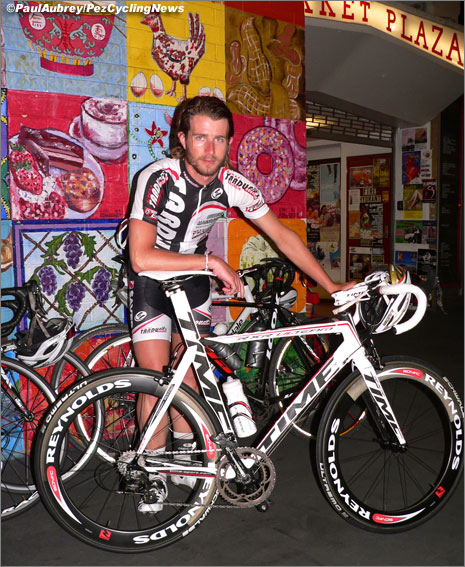 Now that is a sweet bike.

Will is an Adelaide local and had been in possession of the beautiful TIME for 1 week today. The frame is a Time RXR ULTeam with an absolutely striking white finish. Will did not hold back with the groupset by fitting Campag Super Record. This is the first time I have seen a mere mortal with the latest offering from the Italian trendsetters. The wheels are Reynolds tubulars (as you can obviously see) with Schwalbe Ultremo tread. So how does the bike ride? Will described his old ride, a Look KG 361 as being similar to a Ferrari Dino where as the TIME is a F1 race machine. I caught a glimpse of Will powering up Willunga Hill, and let me assure you he does his steed justice. 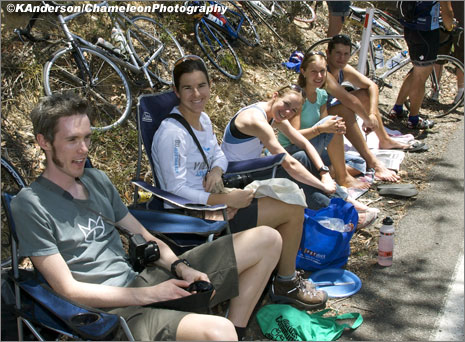