With a 25 second advantage, Allan Davis’ position as race leader was not expected to be challenged today. Nevertheless we were in for some thrilling racing on the spectator-friendly street circuit in the heart of Adelaide. PEZ was once again on the scene and there to bring you all the action!

The first break of the day contained 13 and included some notable riders high on the GC including Luis Leуn Sanchez (Caisse d’Epargne), Jens Voigt (Team Saxo Bank) and Wesley Sulzberger (Franзaise Des Jeux) along with the ever present Jack Bobridge (UniSA). 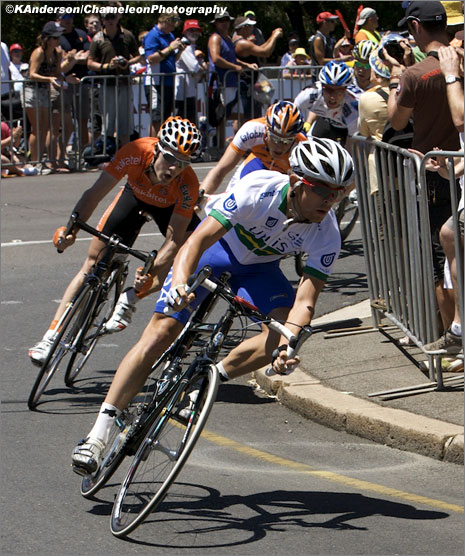 Would you have expected anyone else to be in the break? Jack Bobridge once again! 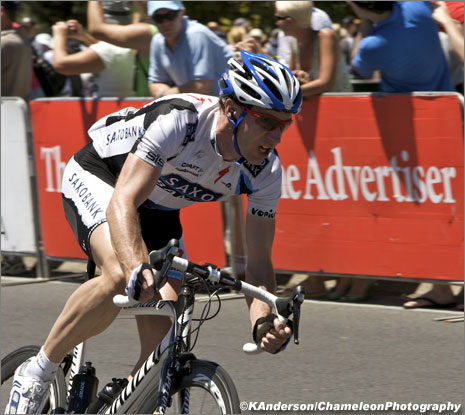 And of course, if there’s a break worth riding: Jens Voigt will be there too.

QuickStep took control of the race and ensured the margin was kept in check however the break was able to contest the two valuable sprint bonus available. The end result of the breakaway was Sulzberger jumping from 12th to 5th and Sanchex from 14th to 12th overall. Probably more importantly for Sulzberger, he moved Franзaise Des Jeux ahead as clear leaders in the team classification. 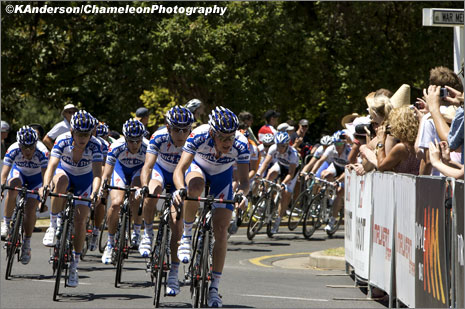 QuickStep had the proceedings very much under control.

With a handful of laps remaining another group broke clear. Garmin-Slipstream obviously had a plan as the move contained both Ryder Hesjedal and Cameron Meyer. However following a strong counter attack by Lance Armstrong that saw him integrate with the break, the race came back together with a bit over a lap to go. 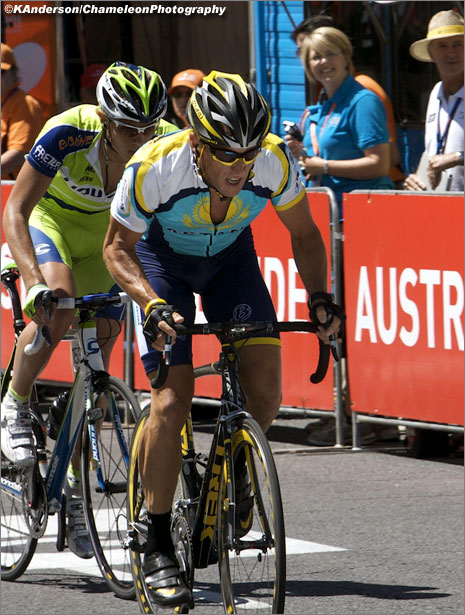 Lance was in full effect late in the day, but even his horsepower couldn’t stave off the tidal wave from behind.

As has been the case all week, the stage was decided by a bunch sprint. Francesco Chicchi (Liquigas) edged out Robbie McEwen (Team Katusha) and Graeme Brown (Rabobank) who pulled his foot on the line.

There was a wee bit of chaos over the line.

There were no major changes at the pointy end of the GC and QuickStep took away a well-deserved victory with Allan Davis. Every time I heard Davis speak, he ALWAYS said he couldn’t have done it without his team. Quickstep supported their leader from day one and clearly demonstrated what a strong team can achieve. 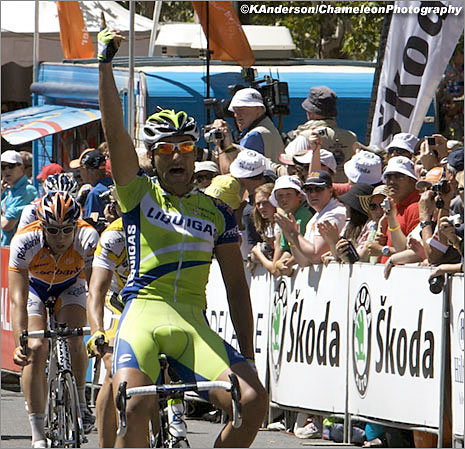 Chicchi squeaked past to take the finale.

A list of 5 things I took away from this weeks racing:

1. Allan Davis has demonstrated that he is ready to move to the top step of the podium. Quickstep obviously did their homework when they signed Davis late last year. Call me biased but it is a pity that Tom Boonen also rides for Quickstep as I would have Davis down as a big favourite for Milan –Sanremo. 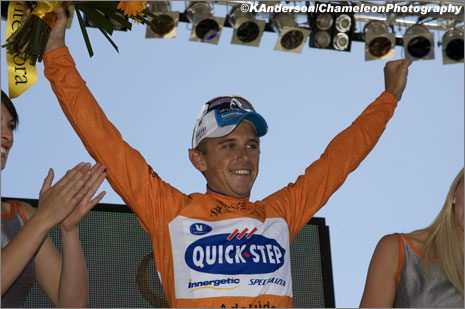 Allan Davis and Tom Boonen should form a very potent sprinting combo. Who’s to say who’ll win on what day?

2. Lance is back! It is probably best described as a circus but don’t get me wrong it is a good thing. Even without a strong team around him, Lance presented himself at the pointy end of affairs throughout the week. Who knows if he can win a grand tour but it doesn’t matter either way. The crowds are coming to bike races and it is just what cycling needs to overcome the doping controversies that have plagued the sport in the last few years. Watch out California, do not underestimate what is coming your way. 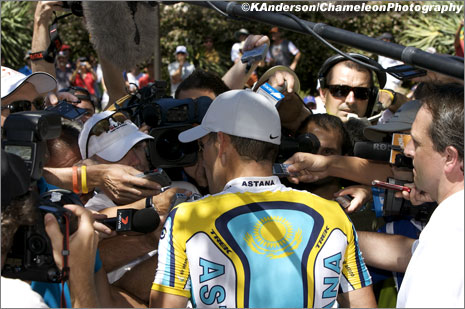 Lance? Did you really expect anything less?

3. Keep your eye out for Jack Bobridge in the coming few years. He is still a mere teenager and has already representing his country in the team pursuit at the Olympics where he rode along side names like Brad McGee and Graeme Brown. What do you think the answer would have been if you asked Bobridge a year ago, if he thought he would ever be in a two man break with Lance Armstrong in a Pro Tour event in his home town? 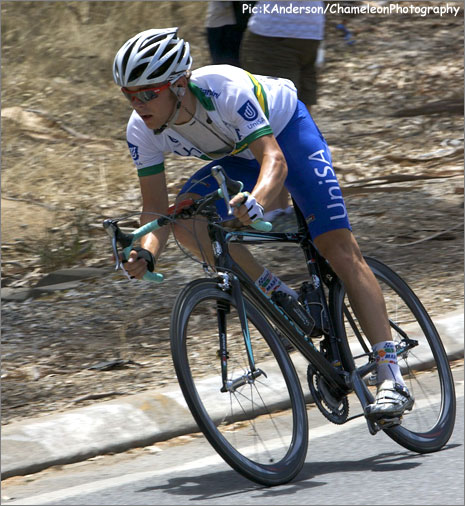 Jack Bobridge used a rare opportunity for such a young rider to ride at the top stage as a chance to show off his wares. He was fantastic.

4. An off-season in the southern hemisphere, combined with lengthy acclimatisation can’t do you any harm as half the top 10 on the GC are from Australia.

5. At the end of the day the pros are human like the rest of us. An exhausted Michael Rogers was on the same flight as us on the way back to Canberra. He flew in cattle class, struggled with his suitcase and bike bag and had to wait on the curb side for his Mum to pick him up.