Throughout the Tour of Ireland, Team Type 1’s Fabio Calabria will be filing daily reports from behind the scenes at the three-day race. Calabria is one of four riders on the U.S. continental team who has Type 1 diabetes. In his first report, the second-year professional from Australia describes what has transpired leading up to Stage 1 of the 2009 Tour of Ireland.

This first entry finds me staying at a Ramada Hotel south of Dublin, waiting for the start of a much bigger Tour of Ireland than last year’s edition. There are 16 teams here, ranging from ProTour to Continental and having competed here last year, I’m definitely looking forward to it.

I arrived on Wednesday afternoon from my home in Colorado. I went for a short training ride to get the flight out of my legs the best I could, got some dinner, a massage, and went to bed early because I had been traveling for nearly a full day. Everyone on Team Type 1 arrived two days before the race to get adjusted to the time difference. 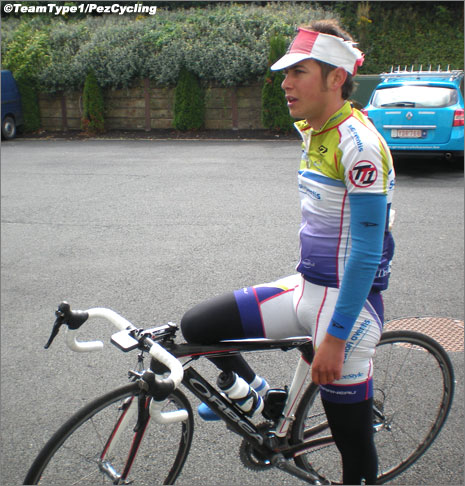 Thursday’s training ride was much drier than the one in the rain on Wednesday.

Thursday, we got up and had breakfast at the hotel and then went for a short, easy training ride with the team. We were fortunate with the weather that we managed to find some sun and dry roads. It only rained for maybe five minutes – and that was after it rained most of the night. I slept all the night through, but I heard there was a big storm from my teammates.
After the training ride, we had some lunch and then drove over to the Ritz-Carlton Hotel where the race starts Friday to meet with some sponsor representatives. One of our sponsors is Abbott Diabetes Care and they have a big presence here. 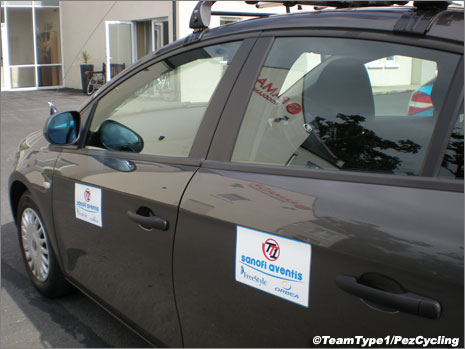 The race organization issued Team Type 1 a Fiat, which we promptly stickered with logos.

Representatives from the Diabetes Federation of Ireland were also there, as well as some people with Type 1 diabetes from a local support group. It was interesting talking to the patients about the technology that is available here and the support the government provides in respect to their health care costs. Their insulin is free and the majority of their health care expenses are free, or of very little cost to them. 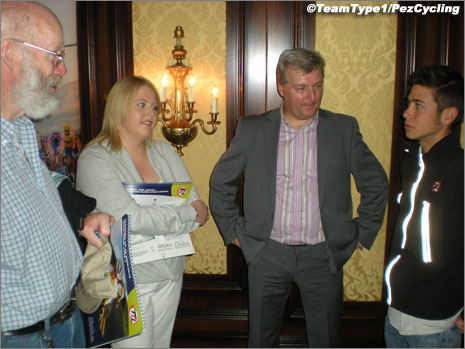 Part of Thursday was spent meeting sponsors and other people with Type 1 diabetes.

Typically at races, especially as awareness of the team grows, we run into either people who have diabetes or a family member or relative of someone who has diabetes. So it’s very interesting to see how widespread the disease is across the globe. I’ve raced in Malaysia, Mexico, Canada and Ireland (twice) and I’m always running into people who are somehow affected by diabetes.

I’ve had Type 1 diabetes since I was 13. I was diagnosed in the emergency ward of a local hospital where I spent two days in a coma and a further week in the hospital. I was relieved more than anything that the diagnosis wasn’t terminal or fatal. But I have certainly had to make adjustments after I was released. I’ve been fortunate to have the support of a fantastic family and health care system that has helped me to live my dreams and do whatever I want to do. 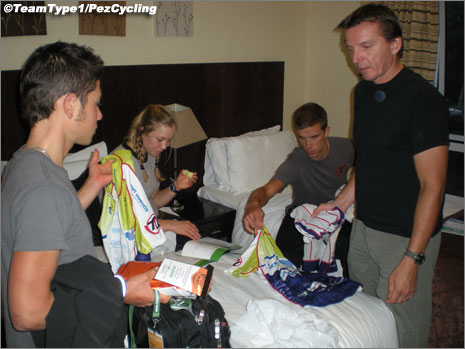 We received our “international” kits because advertising regulations are different outside the U.S.

Having Type 1 dabietes means my body doesn’t naturally produce insulin, which is the hormone which transfers the glucose into energy for your body. This means I need to inject it. I use Apidra, a rapid-acting insulin and I receive it through my OmniPod insulin pump. I have to continuously monitor my blood glucose levels, which I do with a device called the FreeStyle Navigator. It’s a little like a PDA or about the size of a cell phone. So during tours, particularly before they start, I am checking my Navigator to see where my blood glucose levels are and where they need to be before the start. 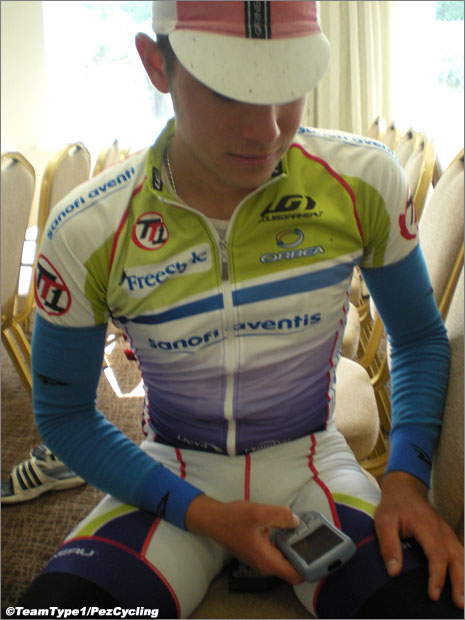 The FreeStyle Navigator tells me what my blood sugar is and whether it is trending up or down.

It depends on the nature of the race for how often I check my blood sugar during the stage. Sometimes, if it’s a fast race there is no opportunity to pull it out of my jersey pocket and check it. If my glucose levels do drop low, I have some Dex4 (rapid-acting glucose) to raise my sugars quickly.

During the Tour or Ireland, I’m hoping to be able to help my teammate, Matt Wilson, in the King of the Mountains (KOM) classification – which he won at this race last year. Hopefully, he will also improve on his fourth position on the GC from a year ago, too. I spent a lot of time on the front last year leading him into the KOM sprints and also getting drinks and clothing throughout the stages as needed. 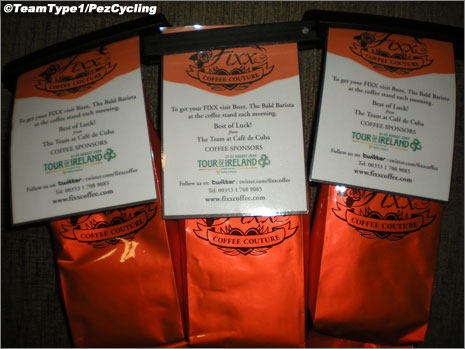 Each rider received a packet of beans from the Tour of Ireland’s official coffee sponsor.

All of us on Team Type 1 are going to have to be paying attention 100 percent of the time each day, as I vividly remember the narrow roads of this race that are sometimes covered with moss and gravel. And once it again, it will be crucial and challenging to stay at the front and out of harm’s way. 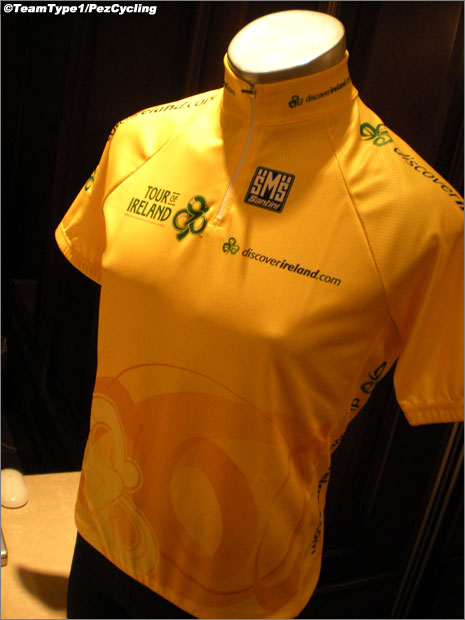 The prize everyone is aiming for at this year’s three-day race.

This race also has a lot of attention this year because Lance Armstrong is here. I raced at the Amgen Tour of California and the SRAM Tour of the Gila – and, believe me, the Tour of the Gila was even more impressive in terms of the crowd. I’m constantly amazed at the amount of people one person can draw to an event.

***
Keep it tuned to PEZ throughout the week. Team Type 1 will take us inside the ropes of the Tour of Ireland over the course of the three stages.