Tour Of Britain Gets PEZ’d: Of Peblis To The Play

Roadside: “Peebles for Pleasure” says the sign, and the good folk of this part of the world, one of the oldest Royal Burghs in Scotland, certainly do know how to enjoy themselves – today they warmly embraced the first ever visit to these parts by the Professional Tour of Britain, now in its sixth year of running in its current form.

I’ve recently married Gillian, a lass from the town, and over the last few years I’ve taken part in the many annual festivals, gala celebrations and sporting events – there seems to be something happening all the time, and today was yet another example of the fun-loving and family-oriented nature of these great Borders people. 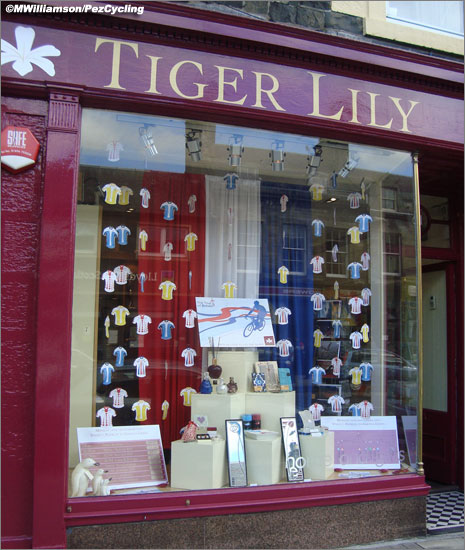 This morning, the third stage of the race set out on its only Celtic leg, heading for the finish at Gretna – still in Scotland, but only just – and was sent off by a townsfolk who threw themselves fully behind the event. 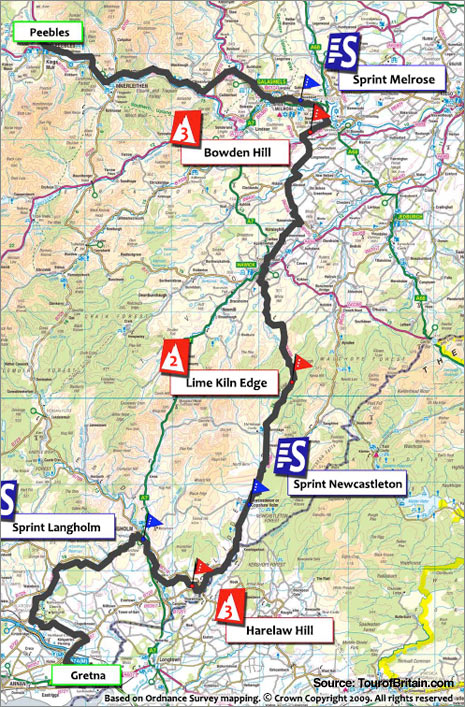 Most of the shops, hotels, and cafe’s entered the spirit of the occasion; taking part in a “pre-race Big Breakfast”, and dressing their windows with cycling-related displays celebrating the excitement of Britain’s biggest race starting from the small market town. 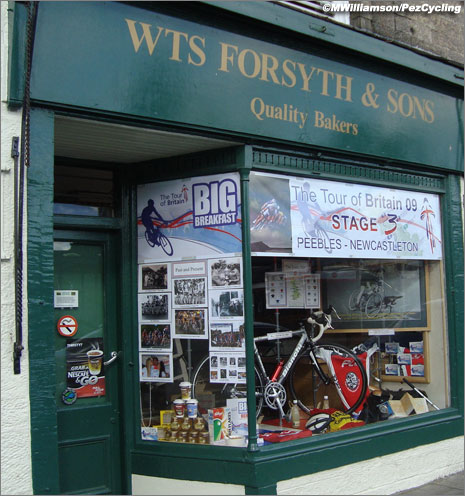 Peebles (or, the “Auld Burgh Toon” as it’s known) nestles in the beautiful Scottish Borders, and was a favourite visiting place for successive Kings and Queens of Scotland. King James I of Scotland had a particular fondness for the place, and his famous humorous poem “Peblis to the Play”, written in the 15th century after witnessing the “Beltane” festival for himself, provides a wonderful picture of the joyous festival and fair that took place annually in the town – and still does by the way – on “Beltane-day”. 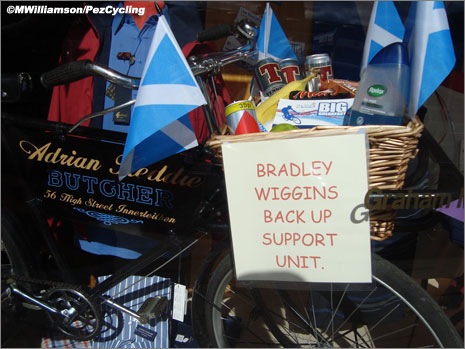 This shopkeeper must have read Brad’s book. 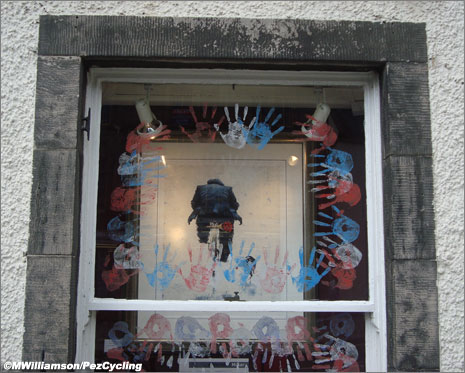 The art shop even changed their display picture to cycling ones.

The prevailing note of the poem is undoubtedly one of happiness and the laughter of children, and the summertime festival’s influence is still as potent nowadays in binding more closely the hearts of all lovers of Peebles to the place of their birth or adoption. It certainly has worked for me.

Despite the town being used to things “going on”, the High Street was clearly buzzing this morning, particularly when the team buses and cars started to appear, at around eight-thirty. 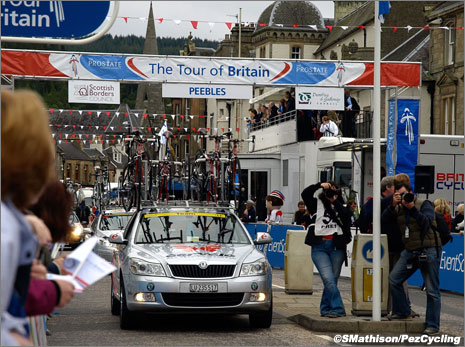 Cycling is hugely popular in the Scottish Borders, and in Peebles in particular – with the Glentress and Innerleithen mountain-biking trails just outside the town. The Peebles cycling club boasts no fewer than five current children’s British Champions, who enjoyed getting their picture taken with British Road Champion, Kristian House of the Rapha Condor team. 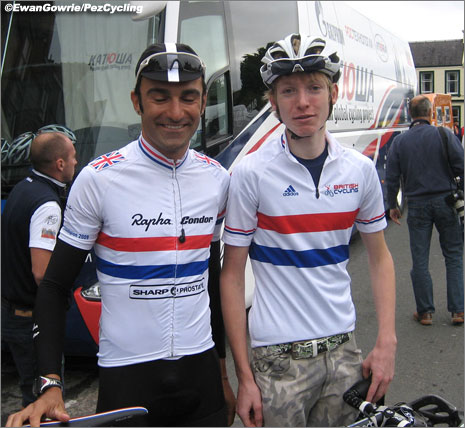 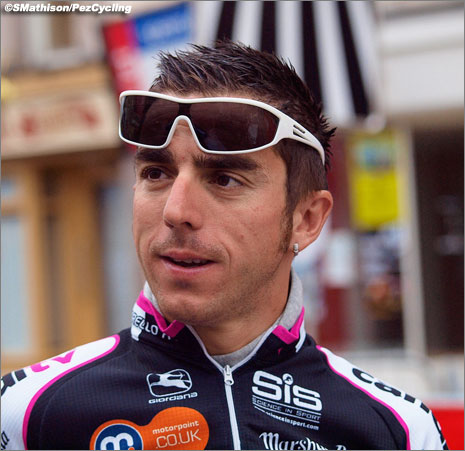 Candi TV’s Russell Downing is moving to the big league.

A quick chat with Russell Downing, who last week signed the long-sought-after ProTour contract with Team Sky, following his mightily impressive win in the Tour of Ireland. We thought you deserved a place in a top team after your ride to 40th place in the Worlds last year, “Ah, it wasn’t that good mate, I was only 49th!”. Yes, but in the same bunch as Bettini and Boonen, Russ! 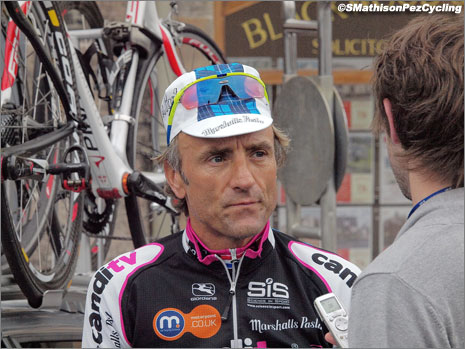 Wonder if Malc will be riding UCI 2.1 races when he is in his fifties? Russell’s 48 year-old team-mate Malcolm Elliot is lying 7th overall – quite amazing. 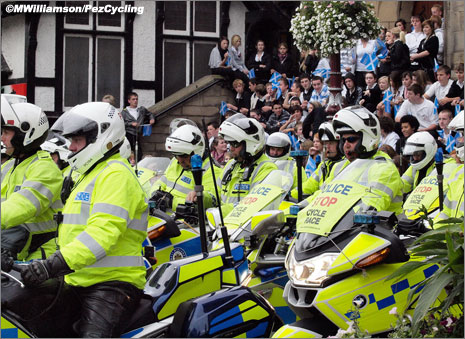 The Police Special Events Unit – best job in the world if you’re into motos.

There’s Richard Latto, who I know from competing in triathlons, but who’s also a senior police officer with Lothian & Borders Traffic Division, and who was responsible for coordinating the local police presence with the race’s own police unit. “I’ve been working with the dedicated police mobile events unit and the various regional councils for a couple of months, to ensure enough of a police presence for public safety and for the safe passage of the race – it’s not like the Tour de France, where every little farm track on the route has a gendarme there all day, because this race runs on a ‘rolling road closure’ basis, we can do what we need to with just two motorcycle outriders and 15 cops, positioned at the pinch points”. 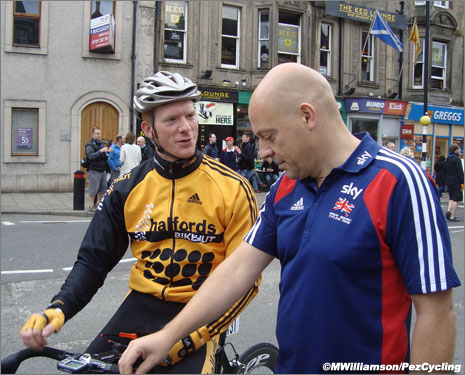 Halfords’ Ed Clancy was in discussion with Team Sky’s boss, Dave Brailsford, present at the race this morning “to finish a little business”. Clancy to Team Sky too? “Nope”, Ed told me, “I’m going to continue aiming for success on the track, with the World Champs early next year, and the Commonwealth Games the following season. I’m different from Wiggo, he always knew he had a great road rider inside him – I don’t think I do!”. 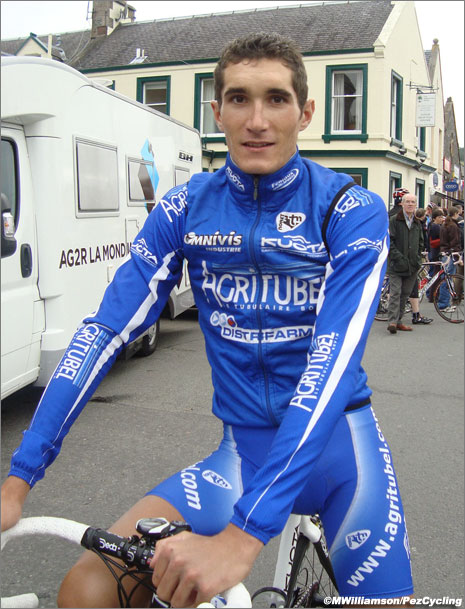 Brice Feillu – Agritubel’s stage winner at Arcalis pottered by, on his way to the sign-on. I joked with him that on the second rest day at the Tour de France, when Ed Hood and I were shooting the breeze with Silence Lotto Director Henrik Redant, Brice came up and asked us if the Silence team boss Marc Sergeant was around.

Right then, we thought; that’s you off to Lotto next year. Brice laughed, “Ha, no, that didn’t work out, but my brother and I are signed with Vacansoleil, and hopefully I’ll get a chance to do even better next year.” And this race today? “Well, it’s a bit cold here this morning, can I borrow your leg-warmers?”

By now, it was time to go and see Cervelo Test Team’s Dan Fleeman, who was going to officially open my friends’ new bike shop, Bspoke Cycles – handily sited just 20 metres from the team buses. The lure of an espresso or two helped of course, “For sure,” notorious coffee-fiend Dan told me, “we do have a coffee-machine in the team bus, but it’s the bus that’s at the Vuelta!”. Dan did the business with the scissors, and stayed as long as he could for a good old ‘blether’. 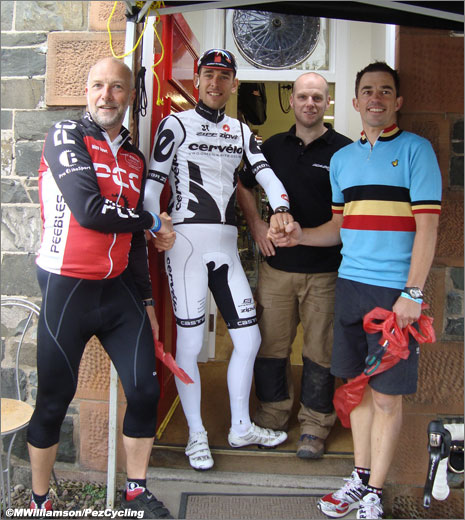 Gary and Ewan were chuffed that Dan kindly took some time out to cut the tape for them, but couldn’t believe what happened next – very much in demand, Olympic Champion and fourth in the recent Tour de France, Bradley Wiggins, popped over for a look at the Felt bikes in-store. 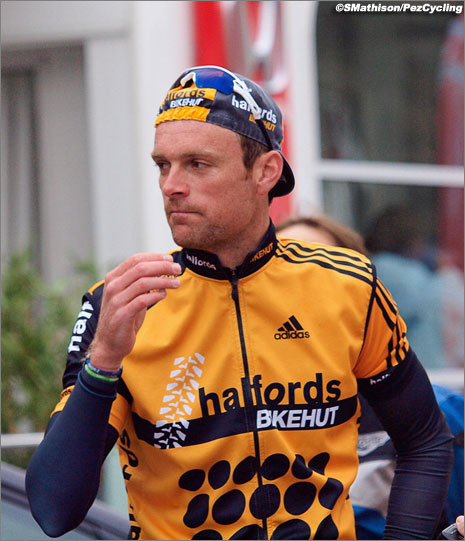 Outside, with race announcer Anthony McCrossan counting down the minutes ‘til the off, Halfords rider, ex-World Champion on the track, Rob Hayles, swung by. Coffee Rob? “Nope, toilet!”. Rob is looking forward to riding for Scottish-based team Endura Racing next season, but we can’t say who else is on the roster, quite yet.

Inside the shop, Brad was still signing autographs for the ever-growing crowd, keen to catch a glimpse or say hello to the superstar track-turned roadman. Not a bad shop-opening after all then lads!

Brad was more than happy to sit and have his picture taken with babies bouncing on his knee – someone asked “You ever thought about politics after cycling?”. 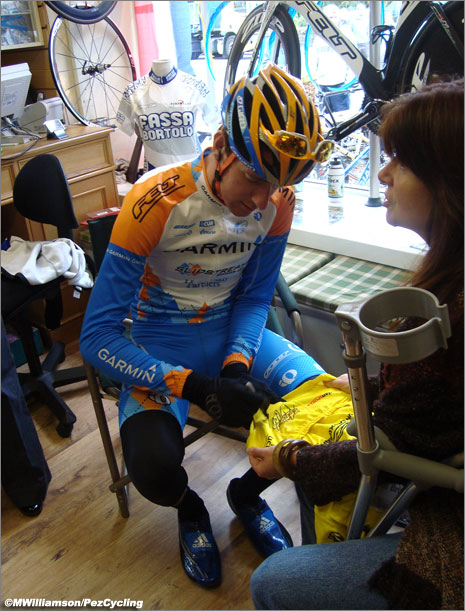 Despite being one of the biggest names in the race, Bradley spent time signing autographs and chatting.

I took a look at my watch – oops… Brad, it’s nearly time for the depart, have you signed-on yet? “No, I haven’t actually, best be off then, don’t think they’ll wait for me!”.

David Menzies, one of the race commissaires, joked with me earlier that there hadn’t been any official warnings or fines so far (he sounded just a tad disappointed) – “All the riders are being unusually well-behaved this year!” Hopefully Mr. Wiggins won’t be the first transgressor, for missing the sign-on then.

The bike-mad children of Peebles lead the race around the town.

The children – including some riders I think we’ll see in this race in six or seven year’s time – from the Peebles Cycling Club and the High School Club led the peloton for a lap of the town, whooping and waving at the crowds they embodied the love of cycling and the sense of fun we’d all like to share. Then, after waving goodbye as the riders reached Glentress (kilometre zero) and headed south-west towards Galashiels, it was “back to class” time. 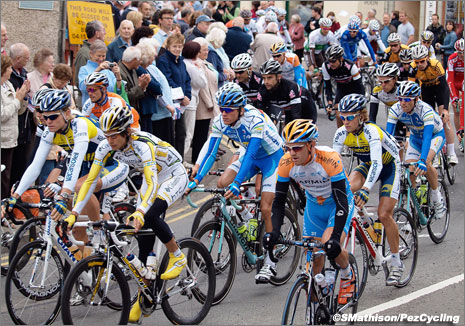 The bunch head out of town to the start.

Entire schools had come out to cheer on the riders in the town, and with around 3,000 children in 25 schools across today’s parcours having picnics and sports days in order to see the race, it’s been an exciting day for the children, and for local cycling fans, businesses and residents alike. 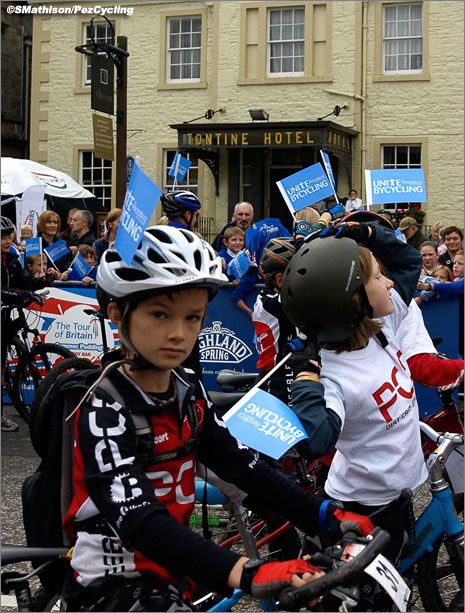 Sitting with my pals in the bike shop with a coffee, naturally, after the dust had settled, we reflected on the great send-off everyone in Peebles managed for the riders today. We’re sure the race appreciated it, perhaps as much as Dan appreciated the coffee! 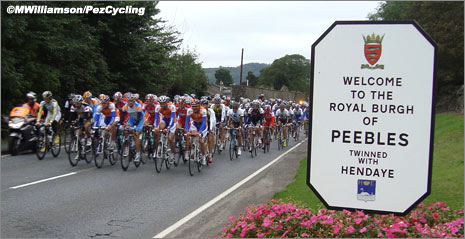 Bye ToB, see you for a stage finish next year?

Toolbox: The Pain of Low Back Pain