Late summer racing is no time to rest on your laurels, especially when the next guy is motivated and ready to do the business. Garmin-Chipotle’s Tyler Farrar stormed to top spot in Germany – and the biggest win of his career.

With the temperature at 23 degrees, it was a nice day for a long training ride in Northern Germany – Sergio De Lis (Euskaltel) and Yuriy Krivtsov (AG2R) very thoughtfully went up the road after just 12 kilometres to give the TV cameras something to look at; whilst the peloton got on with the job of topping up their tans.

We picked up the action with around one hour to go, at 43 K as the two TV stars succumbed; prior to that – see above!

Garmin are providing the timing today – is that a clue? The sat nav team have a man in there to beat everyone in the peloton, except the absent Mark Cavendish – one Farrar T. 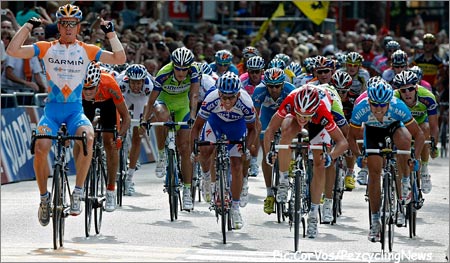 Tyler Farrar scores the biggest win of his career!

The jerseys at the front as the two banditos disappear are no surprise – Saxo for Matt Goss; Columbia for Mark Renshaw (second last year) and – Garmin, ‘all for Tyler.’

Matti Breschel takes the DM (sorry, euros) at the top of the Waseberg climb for the second time; to take the presh off his Saxo team and it’s Columbia in familiar ‘Cav-graft’ mode.

QuickStep come up to give the US team a ‘punt oot’ as we say in Scotland – not like a Belgian team, at all!

Nick Nuyens (Rabobank) has bridged to Gilbert –that’s a strong pairing and both of them need a big win.

The Waseberg for the third time, and the bunch is just behind, but the descent favours the small group as a Garmin bridges – it’ll be a surprise if he contributes. 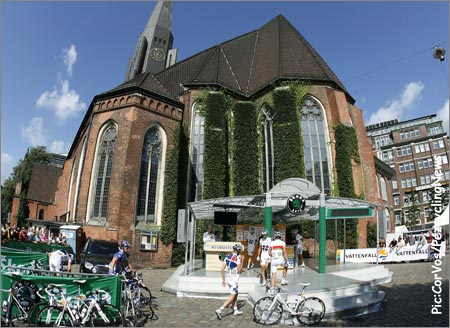 But they’re caught at 26 to go as Fuji, Astana, Lampre and Liquigas all put in an appearance.

Cancellara goes at 25 and the sharp riders are on him, pronto – Daniele Bennati (Liquigas) and Nicolas Roche (AG2R) among them; but another group has come across, maybe 25/30 at the head.

It seems too big to commit; too many glances left and right – Chavanel goes for QuickStep, but it comes to naught.

The gap back to the bunch is 25 seconds and they are moving, not like the break which is too busy thinking about what to do.

Sebastien Turgot goes for Bbox – good exposure, but a winner?

Turgot has his foot out on the descent, on the limit, he’s not holding back – we have to give him that.

The crowds are definitely down for this race, there’s virtually no one standing beside the Waseberg as Turgot is consigned to the history books; and Gilbert goes again.

O’Grady counters on the descent for Saxo – the Aussie won here in 2004 – as Nicolas Roche puts those good genes to work and gets up, there’s a Lampre there, but it’s all irrelevant as the Technicolor tide that is the peloton sweeps over them.

It’s an arrowhead of maybe 60 now as Milram, QuickStep, Columbia and Astana all mass at the front.

Chavanel drives for Davis, the German TV producer focuses on Ciolek – but shouldn’t he be nearer the front?

The K’s are clicking down now but still it’s QuickStep – Davis was third here last year.

Cancellara will have to be in good form to jump this train; they’re flying in through the leafy suburbs of Hamburg.

Inside six K and into the city; Saxo, Cancellara now, driving for Matt Goss, Frank Hoj is there too.

Four to go and Columbia are trying to move up, as Hoj drives and drives.

Liquigas have infiltrated Saxo, and there’s three to go but the Swiss Olympic time trial champion is driving the train.

Inside two K and Katusha’s Napolitano is out, facedown on the deck, but he seems OK.

Garmin, Columbia at the red kite, it sweeps across the road, the barriers narrow it in, Cancellara sits up, Breschel goes, is that Goss? There’s Ciolek, but it’s narrow dangerous, scrappy – Farrar finds space, he’s clear, he clenches his fists, roars – it’s his!

Breschel is second, Ciolek third – maybe he should have been better organized; but it’s the man from Washington State’s day and no one else’s.

Tyler Farrar – the first US rider to win here in Hamburg – but I get the feeling that this won’t be his last big win.