Race Report: It was another action packed race in Mendrisio with attacks all over the place by riders who may be under 23, but most of whom mix it with the Pro’s on a regular basis. In the end a young Basque-Frenchman took the honours in a solo effort that any Pro would be more than proud of.

Same course as this morning, but the Under 23 Men will ride 13 laps of the 13.8 kilometre circuit covering 179.4 kilometres with 3,185 metres of climbing. This morning’s Women’s race had lots of excitement and crashes, this afternoon’s race had it all too!

Away They Go!
As always with the younger riders, it’s a very fast start, and soon there is a group up the road; Alex Howes (USA) with Colombian; Jose Cayetano and local boy; Jonathan Fumeaux, with the bunch rolling along behind, far too early for too much action! At the end of the first lap the three had put nearly 1 minute between them and the pack. The Russian, French, and Kazakh teams were the most interested in bringing the escapees back, sending small attacks up the road. One of the Kazakh team (Shugaipov) persists with his chase and got stuck in no-man’s land for some time.

At the top of the climb to Novazzano (2nd time) the speed of the peloton had seen off all the escapes, and once again they were all together. It stayed like this through the Start/finish area. Next to try his hand was Austrian rider Schoffmann, who attacked over the top of the Castel. By the Novazzano he was away with just over 1 minute with many teams on the chase.

At the end of lap 3 (41.4 kilometres) Martin Schoffmann’s gap had risen to 1:35, a bad crash slowed the chase as they were starting the climb of the Novazzano. Colombian rider Carlos Alberto gives chase on his own, and Schoffmann has a lead of 1:17 on Alberto and 1:42 on the peloton at the end of lap 4 (55.2 kilometres).

Matthews of Australia went out on his own on the chase of Schoffmann. He was caught by three others who all in turn caught Alberto, this giving us 5 riders between our leader and the bunch, which was splitting to pieces on the main climb. At the top Schoffmann is 14 seconds ahead of the 5 (which were now 4), and 21 seconds in front of the very fast moving peloton

As they finished lap 5, Schoffmann was caught by the chasers giving us 5 up front with a 51 second lead. The leaders were: Schoffmann (Austria), Atapuma Hurtabo (Columbia), Matthews (Australia), Keinath (Germany) and Veilleux (Canada). They were being chased by 16 others on the climb of Castel with the bunch not far behind them.

At the end of lap 6 (82.8 kilometres), the leaders still had more than 1 minute on the chasers, and the peloton was on their heels. By the time the leaders got to the top of the Novazzano there gap was 1:15.

The Half Way Point
The end of lap 7 (96.6 kilometres), the bunch was too busy messing about that the lead was exactly the same; 1:15 and the Australian team were on the front slowing the chase. As the leaders dropped off the Castel climb, the promised rain started, which could change the race as it did in the women’s race with crashes and punctures. At this point, the main bunch had shrunk a fair bit, down to around 60 riders. The leaders topped the Novazzano before the bunch by 2 minutes with the Danes, Italians, and Poles trying to liven it up a bit.

The start of lap 9 (110.4 kilometres): it was 1:45 to four break away riders and another 5 seconds to the bunch, French, Russians, Poles, Dutch, and Italians all to the fore, with the bit between the teeth. It looked like that was it for the leaders as they topped the Novazzano, a Russian rider (Solomenikov) had jumped across and the bunch were nearly on them, 7 seconds at the line as they started lap 10.

The Colombians were on a mission today as Henao Montoya was the next of the little guys from South America to shoot off up the Castel climb, he was caught just over the summit. This split the bunch up again on the descent. GB rider; Peter Kennaugh attacked before the main climb taking another 12 riders with him, but there were no Italians, so the chase was on behind. They had them back as they crested the top, and it was all together again for the start of lap 11 (138 kilometres), 3 still to go. 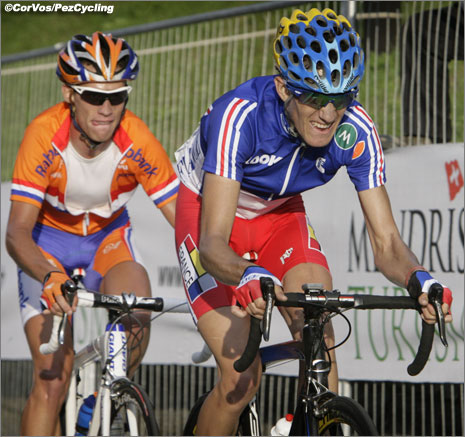 Sicard and Kreder made the move of the day. Sicard, however, was plenty fast enough on his own and left Kreder behind.

Fifty riders were left to cross the Castel and pass the grapes of Merlot wine. The speed had dropped from earlier as Howard (Australia) tried to get to three leaders who had escaped on the descent. He got to Geniez (France), Brambilla (Italy) and Furdi (Slovenia); they were joined by Hanao Montoya (Colombia) again. The Dutch, GB, Belgians, and Germans had missed it, and the leaders gained 22 seconds at the top of the Novazzano and by the start/finish line they had 20 seconds on the lone Belgian, Baugnies, and 41 seconds on the peloton.

2 Laps To Go!
Baugnies was caught at the start of the climb to Castel and the other brought back half way up, just after the steep section with 155 kilometres covered, there were now 45 riders left. Sicard (France) and Kreder (Holland) start the climb with a slight advantage on Edet (France) and Silin (Russia), wth the bunch right behind. A GB rider; Peter Kennaugh was powering the bunch up to the climb to the two leaders.

Last Lap
The bell rang for the last 13.8 kilometres, and we had Sicard and Kreder with 29 seconds to a group of seven a few seconds in front of the bunch. On the climb of the Castel for the last time, Sicard dropped the weaker Kreder to put 15 seconds into him and 31 to the chasers. Sicard is a Basque-Frenchman, which is probably why he rides an Orbea. Anyhow, he had Kreder still chasing at 40 seconds and a group of 10 over 1 minute behind him. 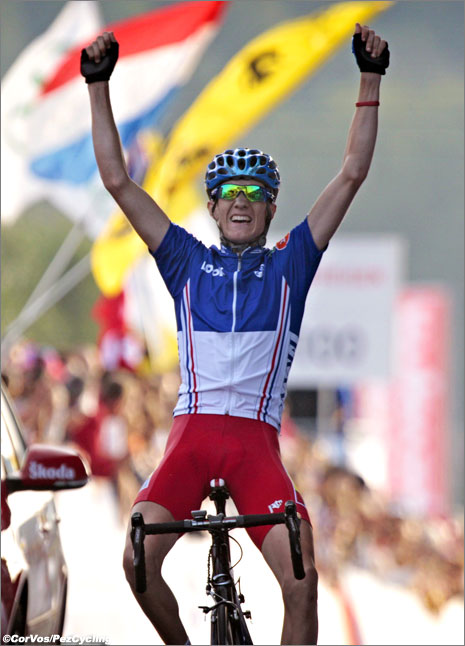 The last time over the summit of the Novazzano, Romain Sicard was 33 seconds ahead of Silin (Russia) and Carlos Alberto (Columbia) and 1 minute 10 seconds in front of Kennaugh (GB). The young Frenchman had lots of time to enjoy his win, both arms in the air and clapping himself. The Columbian; Carlos Alberto got the better of Silin in the sprint for silver and Kennaugh came in 4th. 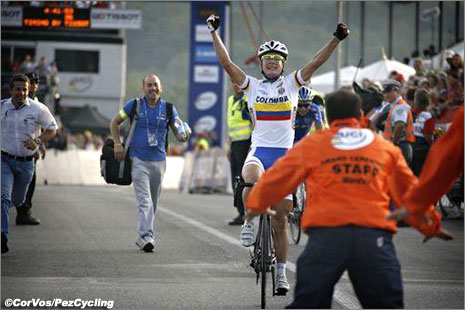 Carlos Alberto took the sprint for 2nd over Egor Silin. He was kinda happy.

If today is anything to go by, tomorrow should be a great day, it’s not just a climber’s course it’s also for riders who can descend. Don’t forget we have Matt roadside and a full report on the Pro race, stay Pez! 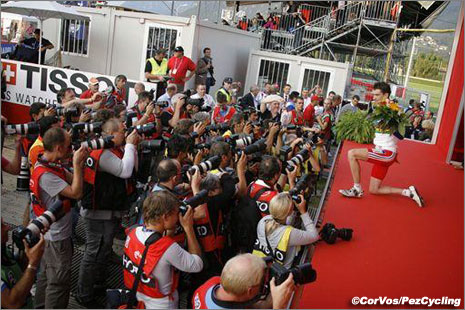 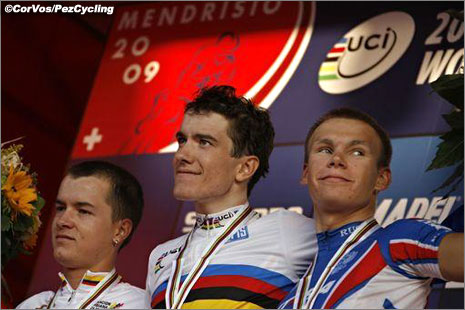