Race Report: Free wheeling the length of the finishing straight, hands high, waving to the crowd, pulling at the front of his skinsuit and pointing at the white cross of Switzerland, Fabian Cancellara confirmed that when it comes to time trialling, there’s everyone else – and then there’s him!

Beijing silver medallist, Gustav Larsson of Sweden was caught by the winner, but stayed cool, used his team mate as a marker and rode to silver – again. 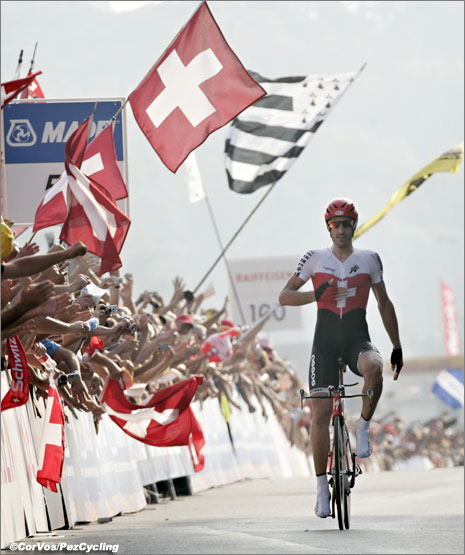 There was no need to hurry for Cancellara in the final meters. He took the opportunity to enjoy his hard-earned finishing straight soft pedal.

Bradley Wiggins suffered a ‘mechanical’ on the last climb, lost his cool, tossed his bike and finished way down, when a bronze was entirely possible.

‘Made for Cancellara’ is the reaction we’ve had from the riders – that’s mostly flat and with just one ‘power’ climb.

The man we would have expected to be fastest out of this first group was twice Eneco Tour winner and former Spanish time trial champion, Jose Ivan Gutierrez. But it was in fact mountain biker turned road man and current French elite time trial champion, Jean-Christophe Peraud who turned in the fastest three laps with 1:01:40. It was the former European mountain bike champion occupying the ‘hot seat’ as event leader as the second wave of riders took to the pristine Swiss countryside.

Pez man and home boy, Rubens Bertogliati was in wave two, as was Irishman Dave McCann. The man from Ulster shaved three seconds from Chris Boardman’s 1993 British 25 mile time trial record of 45:57 in Wales last Sunday – good form then! But the man who was expected to really produce the goods – twice US Elite time trial championship runner-up to David Zabriskie – Tom Zirbel, didn’t disappoint. Big, strong, flat backed and aero, pedalling bends where others free-wheeled, the giant American’s cadence was high as he zoomed past McCann for a minute – interesting to ponder what Zirbel would have done at Port Talbot, last Sunday!

However, the Irishman found new legs at the sight of the stars and stripes and Zirbel had concentration-shattering company for his last lap – it has to be said though, that Zirbel looked heavy legged on the third ascent of the climb as it became the American’s turn to see an Irish back wheel disappear into the distance. 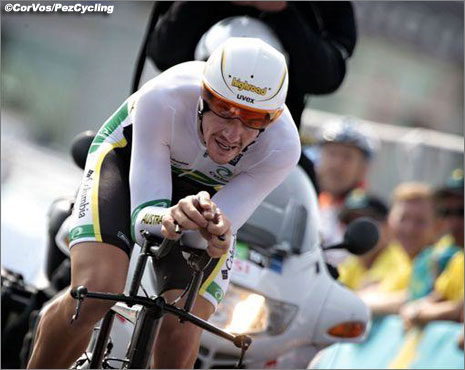 Wave three began to roll as the wave two riders kicked their last. And another Pez-pal, Adam Hansen, former Aussie TT champion and a key cog in the Greipel four-Vuelta-stages-winning machine looked nervous off the start ramp. Chris Froome of GB was there too – he told us this morning that he; ‘Definitely has the nerves going today!’ Lars Bak looked sharp at the start, like a gun dog keen to get let off the leash. 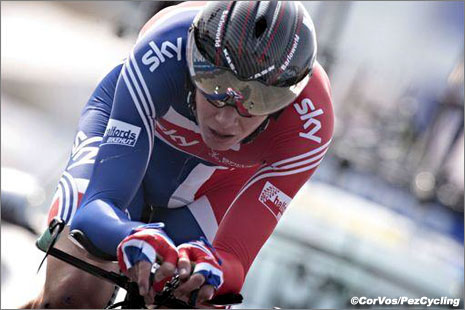 Meanwhile, just along the road it was McCann taking the lead with 1:01:36 but not for long, as Zirbel gasped in with 1:00:42 to take the lead and leave no doubt that the winner will be sub-hour.

The Kazakhstan federation once again showed their respect for the UCI as we watched slightly less than lily white Andrey Kasheckin kick off the ramp – his first ride back from suspension.

Rubens gave his all but wasn’t in the Zirbel-McCann bracket as he slumped over the tri-bars and freewheeled out of the pain.

Zirbel’s ‘first time check fastest’ mark fell to hugely experienced wave three Dutchman Koos Moerenhout, the current Dutch elite road race champion – he was a stagiaire with Motorola in 1994 – but he had slipped to 11 seconds back by the end of the first lap. 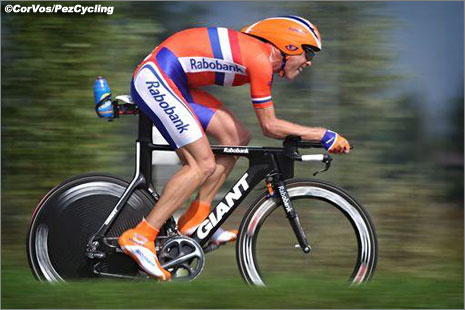 Koos Moerenhout set some solid splits, but Zirbel wasn’t to be bothered by his ride.

For a fast pedalling ‘mountain man,’ Froome wasn’t putting on a bad show against the watch; but no ‘Superbike’ for the man from the Dark Continent – just his Barloworld Bianchi. 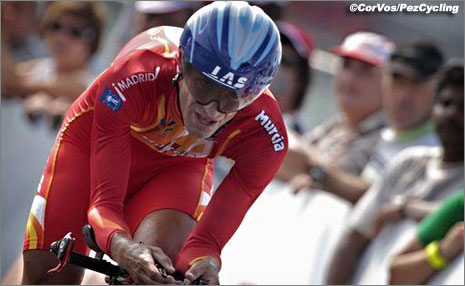 But the trouble with Swiss timing is that it doesn’t care about style or how many riders you catch; and it was Zirbel’s big frame still in the leader’s ‘hot seat’ after wave two, albeit Moerenhout took the second stacking chair as McCann moved closer to a beer and a shower in the third chair.

But Pinotti made that look ordinary as he slashed 13 seconds from the Belgian’s time – with a solo stage win in the Tour of the Basque country this year, he has the endurance; and with Columbia TTT wins in Romandie and the Giro, he certainly has the speed.

At the end of lap one, the sleek Italian was ten seconds up on Zirbel’s time – with flat back, crash hat running into the line of his spine, a high cadence and laser-straight lines, he was the first man to top 50 kph around the circuit. Pinotti didn’t enjoy the second climb of the hill, but was back in the tuck over the top, having only wrested an additional one second from Zirbel.

Trackman Rasmussen was gobbled up by Pinotti without a backward glance as he headed for the lap two time check; but it was starting to look like he’d gone out too fast; the clock backed that up – Pinotti’s time flashed up at one second down on the American. Shoulders are like stop watches, they don’t lie – statue steady had given way to rocking and rolling for the Italian champion on the hard stretches. 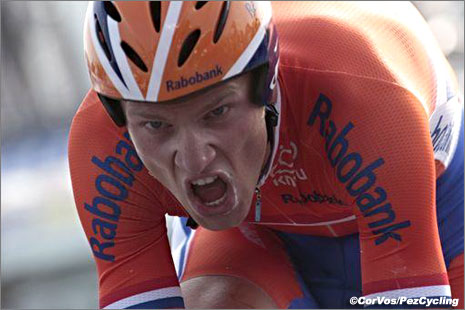 Lars Boom was all face, no power in today’s TT. He finished a disappointing 16th. Well, disappointing if you’re a former U23 World Champ.

Cornu too was starting to wane as the ‘heads’ warmed up on their turbos – Boasson Hagen and Rabon; but no sign of Wiggins or Cancellara. 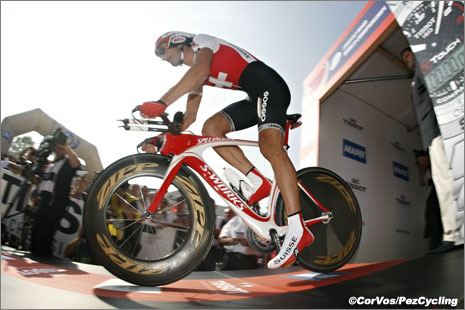 Cancellara didn’t waste any time. He rocketed to a huge first split time, and proceeded to do his damndest to catch everyone in front of him.

Cancellara on the road; and the GPS system begins to tell the story – well up before the first time check with Larsson and Wiggins going well too. Tony Martin goes fastest over the hill, three seconds up on Pinotti, Larsson looks good but here’s Cancellara – 18 seconds up after just nine kilometres. Over the top and he’s riding like it was a prologue, flying, flowing through the bends, rock solid except for the pelvic rotation as the those huge thighs pump the long cranks.

The lap one check; Martin has consigned Pinotti’s time to the dust bin but we only have eyes for one man’s stats, here they are: 19:05 and 52.2 kph. 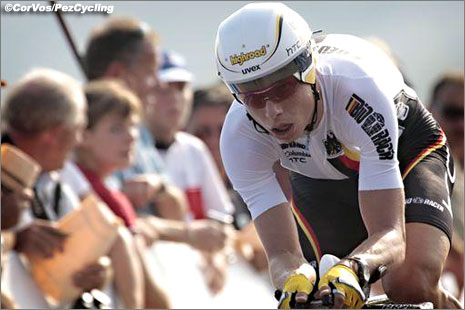 Tony Martin rode a great time trial to finish 3rd on the day and steal Tom Zirbel’s magic moment. I’m sorry, can’t help it, I was pulling for Tom.

I try to avoid those superlatives but – awesome; Zirbel’s time has been bested by nearly a minute.

But there are other guys out there; Tony Martin is doing a job, but it’s hurting – Larsson is keeping cool.

Second climb now for Cancellara as Wiggins looks much better second time over the top; Cancellara goes through the check – he’s over a minute clear now, a huge margin at this level.

Cancellara clips the kerbs, he stares intently up the road – Wiggins could go the way of Larsson – meanwhile Grabsch tops the climb in a huge gear with a deficit to match on the Swiss Chrono Man Supreme. 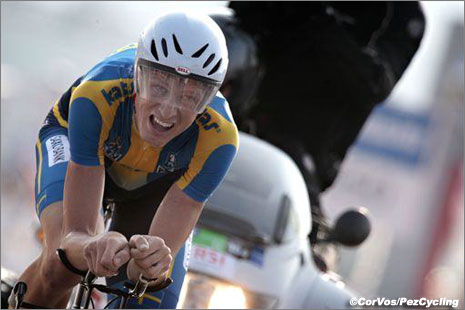 Wiggins is caught and passed like a schoolboy going down to a national champion in a club time trial – incredible! 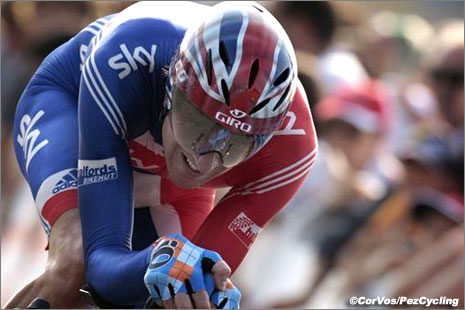 Bradley Wiggins’ solid ride fell to pieces on the last climb of the day.

Cancellara takes the bends in the villages at the speed of a kermesse rider; as Zirbel’s time is looking better by the minute; Martin has cracked and is outside the American’s time.

There’s Rosseler; the Swiss Bull has put four minutes into him – top pros who win big time trials made to look like amateurs. Cancellara’s shoulders skiff a high wall on his right, he thrashes out of the saddle to ease the stiffness of that tight tuck. 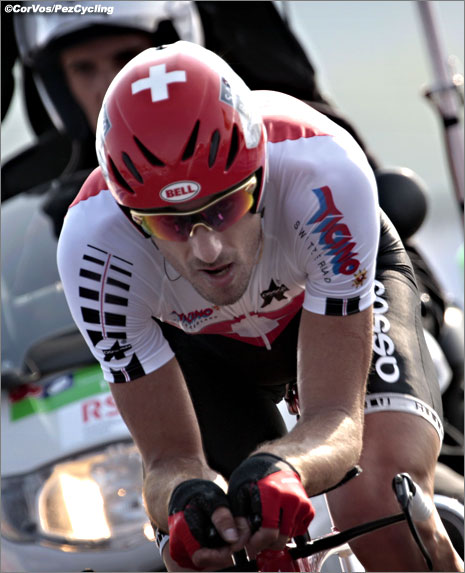 This might have been Cancellara’s most dominating performance yet.

Martin is back in the medals but he won’t be looking forward to that last climb; Cancellara flicks through a roundabout, Larsson isn’t too far behind – when we see the helicopter shot. And now the Swede has caught Wiggins, the Briton tries to hold the Swede; the Swede tries to hold the Swiss – a hellish pursuit match.

Martin looks reasonable on the climb – he goes top, but Cancellara eats up the tar between them; he’s 2:24 up on the young German.

Wiggins has problems approaching the summit, he’s off the bike, he throws his machine away – that’s not the way, keep riding until the car gets there, change bikes – but whatever, its over for him. 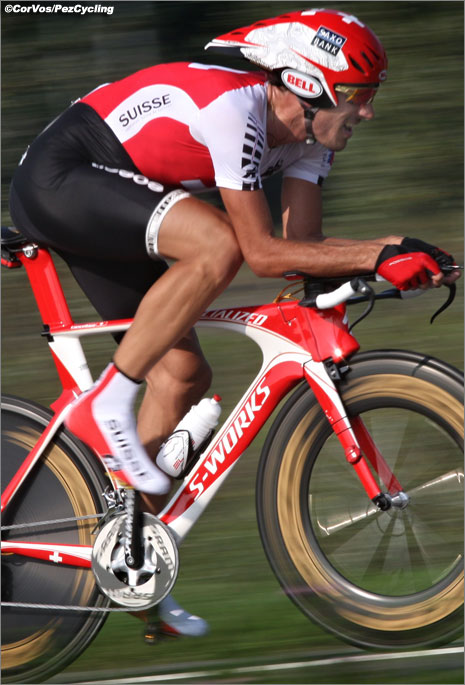 But still Zirbel leads; the day belongs to Cancellara but Zirbel’s ride was brilliant. 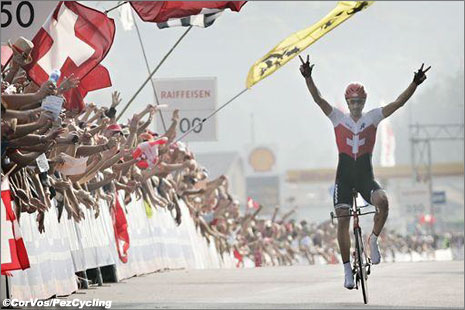 1,2,3 World TT Championships for Cancellara. It’s about time to add a Road one in there.

Larsson comes in for second 59:21 – Zirbel fourth; that’s a shame, a real shame. 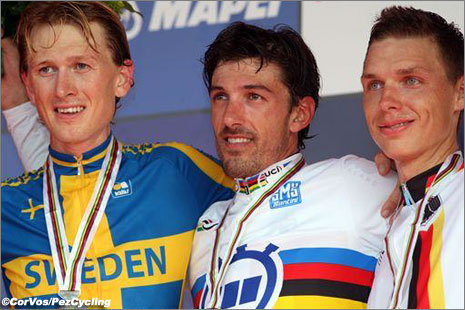 PEZ Chats With Tom Zirbel Before His Huge Ride

Inside The Worlds TT With Rubens Bertogliati