Race Report: A wet and dangerous start put paid to the hopes of defending Champion, Nicole Cooke, who crashed early. There were many punctures and falls, but in the end the action was HOT! Attacks came one after the other on a course designed for excitement, and the strong Italian team came out on top!

The first road race event is for the Elite Women, and as Matt Conn pointed out in his preview: they cover the circuit 9 times to give them 124.2 kilometres distance with 2,205 metres of climbing. The course has a bit of everything. Take a look at Matt’s ride round the circuit, it’s tough but not super-tough!

And They’re Off!
With Swiss timing perfection the women kicked of at 9:00am under grey skies and wet roads, with the possibility of more rain later. The Dutch, German, and Italian teams took charge of the bunch early on, and as usual Jeannie Longo was at the back. The very strong GB team came to the front on the first little rise to Castel San Pietro, looking after the interests of reigning World and Olympic champ; Nicole Cooke, who was involved in an early crash and was just off the back of the bunch. This was not the multi-champion’s day: she retired on lap 5. 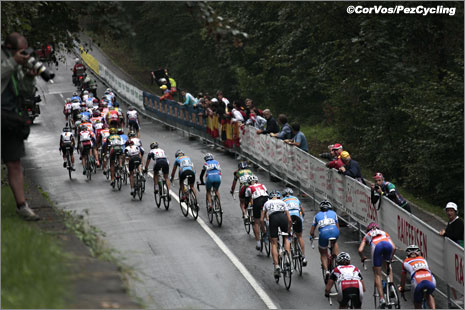 Second time up the climb to Novazzano, team USA put two riders (Stevens and Armstrong) on the front, but it all stayed together. The third time over the main climb Nicole Cooke did not look happy, but unlike some other riders, she hung on at the back of a dwindling bunch.

At the end of lap 3, German rider Ina Teutenberg attacked to take seven other riders with her, they only gained a small gap and were soon pulled back by the USA riders who were not represented. The roads were still wet and slippery as there were a few small crashes on the bends, Anna Evseeva (Russia) being one of them and Paulina Brzezna (Poland) being another. The bunch was shrinking from the listed 127 starters to around 30 by the middle of the 4th lap.

Half Way Point
There were 11 riders with a slight gap on what was left of the bunch as they climbed the Novazzano, but they were pulled back. At the end of lap 4 all was together again after an attack from Cantele, Pooley, Longo, and Worrack that came to nothing. The GB and Dutch teams were controlling things as more riders were being dropped off the back. The most notable missing name at this point being Nicole Cooke, but her team mates Pooley and Laws were well to the fore. 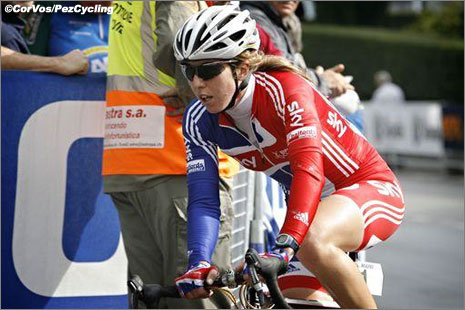 Nicole Cooke didn’t have the best of days in Mendrisio.

On the descent of the Castel climb, the lead group of around 20 riders had a big bunch on their heels and as they came to the climb of Novazzano it was all together again with a bunch of maybe around 50 riders. First attack came from Fabiana Luperini (Italy), she did not get far as Pooley and Hдusler towed the others back to her by the top, and riders started to go out the back again.

At the end of lap 5 (69 kilometres) there was a lead group of around 30 riders again as the roads were starting to dry; hopefully making it a bit safer as there had been many punctures and crashes. At the back Nicole Cooke was calling it a day after riding in with Kate Colclough. 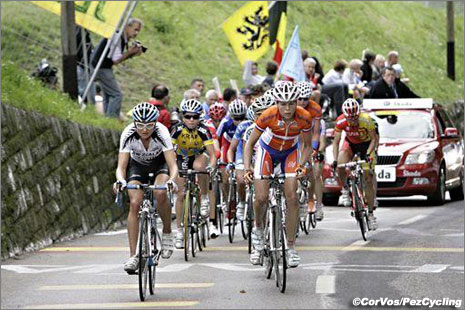 Time trial champion; Kristin Armstrong (USA) was unlucky to puncture on the climb, but fought her way back to a back group to hopefully jump forward on the descent. At the front; Judith Arndt (Germany) was putting the pressure on, stretching out the lead group, this whittled the leaders down to 8 riders. This didn’t last long though, and the GB team were in control again as Armstrong was still trying to cross over to the lead on her own, in TT style!

Armstrong made it up to the leaders of around 23 riders, including; Laws, Pooley, Armistead, Arndt, Hдusler, Abbott, Cantele, Luperini, Stevens, Verbeke, Willock (Canada) and others as they finished lap 6 (82.8 kilometres), 20 seconds behind was a small group led by Longo, which made it across after the line.

Italian rider; Noemi Cantele dropped down the tight descent from Castel like a stone to build up the first serious gap of the day. The chase was being led by Chantal Blaak and Marianne Vos of Holland as they passed through the feed. On the Novazzano she pushed her BMC to a lead of 20 seconds by the top. Behind her, Stevens led the group over the top (again), with Armstrong and Pooley next in line. 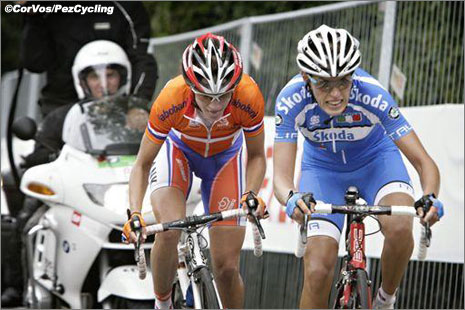 Noemi Cantele was one of the main animators in the race.

By the end of lap 7 (96.6 kilometres) Cantele was still at 20 seconds advantage, the chasers were looking at each other to take on the work as Evelyn Stevens had been doing it all to this point. Judith Arndt (Germany) attacked to cross over to Cantele, but was caught on the climb of Castel, this also cut Cantele’s lead back to 5 seconds by the top and she was caught by the bottom in Balerna.

At the start of the climb of Novazzano there had been a regrouping, leaving 19 riders still in with a chance of Gold. Pooley was again at the head of the action, the US couple of Stevens kept things together for an attack by Armstrong just before the top, this launched Tatiana Guderzo (Italy) off the front, all for nothing as they came together again. Linda Villumsen (Denmark) attacked just before the start/finish area to a 4 second lead through the bell. 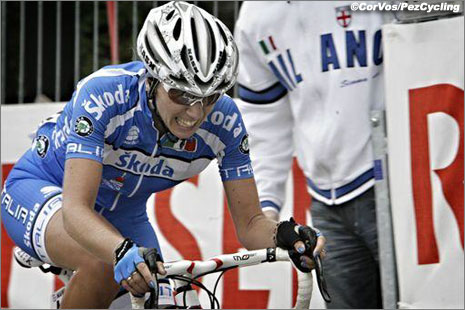 Last Lap
In the group were Ziliute, Stevens, Armstrong, Pooley, Gudenzo, Vos, Cantele, Brandli, Johansson, Abbott, Verbeke, Corset, Hдusler, Cheatley, Willock, Brzezna, Arndt and Pucinskaite, they caught Villumsen at the base of the climb and Guderzo (Italy) attacked yet again. Armstrong and Vos chase with Cantele covering for her country-woman, Guderzo. Behind Ziliute and Brandli try to get things going with Pooley and Johansson lending a hand, but there were a lot of tired legs and the gaps were opening up. 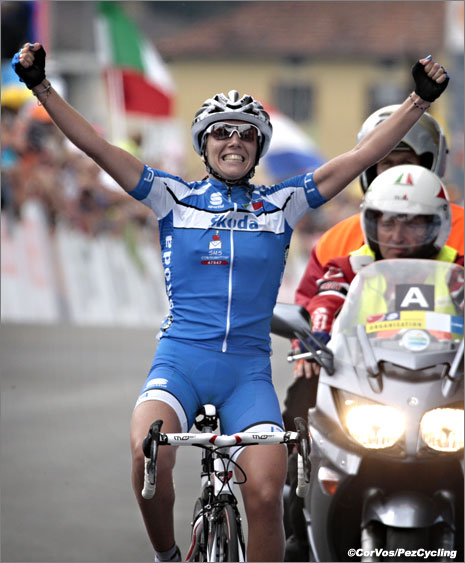 The last time up the main climb of the Novazzano the three (Armstrong, Vos, and Cantele) had Guderzo in sight, but by the top she had 20 seconds on them, the next group had left it too late for any medals. 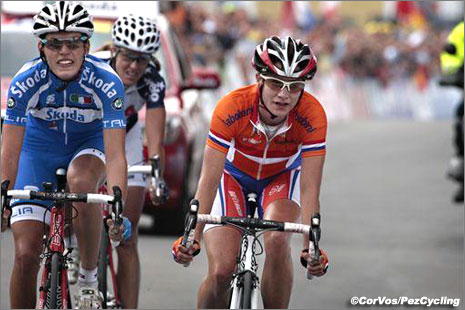 Marianne Vos is a dependable winner of most any sprint. She took the sprint for 2nd today.

Tatiana Guderzo was putting her all into her ride and knew she had it well before the line, Vos just pipped Cantele for silver and the unlucky time trial champion Armstrong came in fourth. 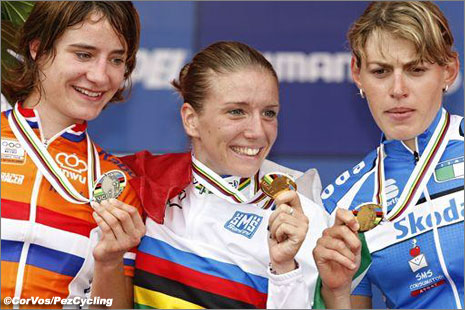 A good race through-out and the course should bring more excitement later for the Under 23’s and tomorrow for the BIG one! Stay Pez for all the Worlds news and Roadside. 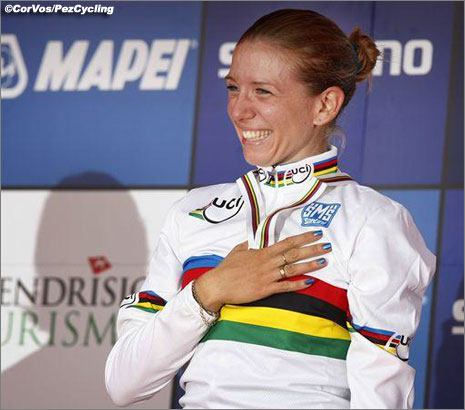