Race Report: Second event of the day is the Women’s time trial and all the usual names were here, including the ever-green Jeannie Longo at 50 years old. A battle royale was in store from the women and they didn’t disappoint with continual changes for the podium places through out.

The Women’s Elite time trial is on a slightly shorter course than the men’s circuit, two laps of a 13.4 kilometre circuit with 110 meters of climbing each lap, a total of 26.8 kilometres. The same start and finish, but without the short section to Capolago, not too hard, but testing all the same. 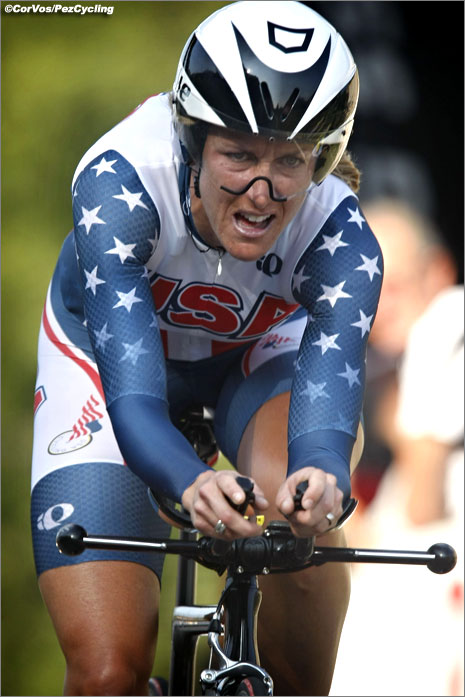 Kristin Armstrong put in a dazzling display of time trialing perfection today en route to what should be her career ending World Championship title.

Dutch rider; Ellenora Van Dijk was the early leader on the course; she was catching riders all the way round and finished with a time of 38:10. Behind her on the leader board was Balderas of Mexico and Vysotskaya of Ukraine. American girl; Jessica Phillips soon changed all that by taking top place with 37:37. Early days yet and there (as every year) is a lot of talk about the veteran French legend, Jeannie Longo. 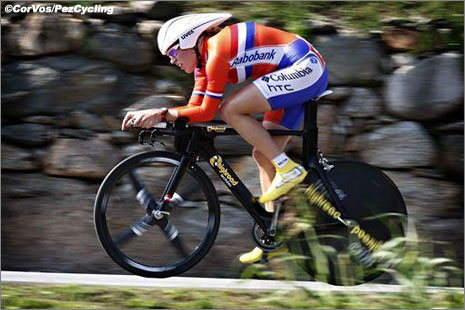 Van Dijk set an early fast time, but a time that wouldn’t hold up to the onslaught of the favorites.

Eneritz Iturriagaechevarria of Spain moved into third position, all I can hope is that I don’t have to write her Basque name very often! On the course, Van Dijk was still the fastest at half way, but Beveridge of Canada and Houvenhagel of GB came close.

Bridie O’Donell (AUS) pushed her way into third as Houvenhagel died a little near the end to be good enough for fourth at this point. Local rider Schnider was getting a lot of support along the lake-side course as she finished quite far down and had been caught by Julie Beveridge who went second with 38:00. 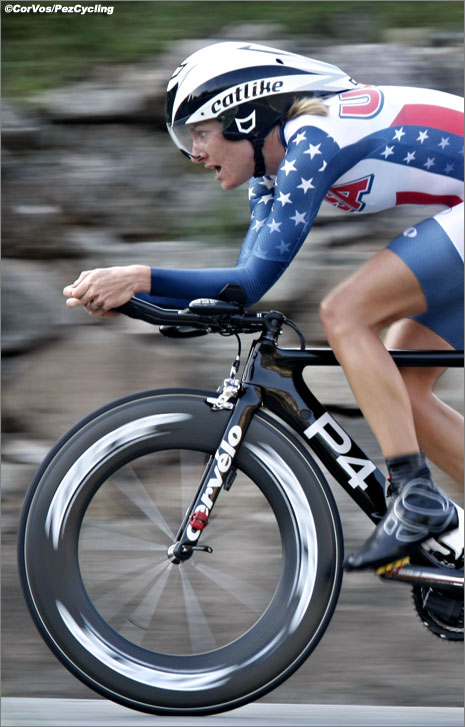 One of the stars from the past; Diana Ziliute (Lithuania), road race champ 10 years ago, was riding well taking fastest time at the first time cheque, this didn’t last long as Canadian; Tara Whitten was thundering along at this point and pulling ahead according to the GPS system.

At half way point Italian hope Tatiana Guderzo had moved into second spot with Ziliute on her heals, slightly slower. Whitten came in fastest with Bruins of Holland close behind, but more were to come and the seeded riders had not started yet. 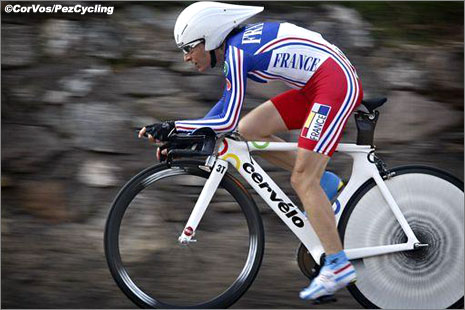 Jeannie Longo-Ciprelli was impressive…as she has been for decades now.

Longo started as Ziliute was finishing, not fast enough to knock Phillips off the top step, but she pushed Italian Guderzo down to third. Whitten blasts her way over the line in 37:00 as new leader, but she will have a nervous wait as Armstrong, Pooley, Neben and Arndt were still on the start ramp.

Trixi Worrack pushed onto the podium in second as the last rider. Last year’s World Champion, Amber Neben (USA), kicked out of the start hut with big hopes. Jeannie Longo went second fastest at half way, but Noemi Cantele from Italy was faster than her and all the others. Not for long as Armstrong was the next to be leading. Last off, Neben went through the half way point in 7th place, so the race situation was:

One lap of the 13.4 kilometre circuit to go and it was looking good for Armstrong as she caught Antoshina. Cantele took podium with 36:21, not for long as Armstrong sprinted across the line in an astonishingly fast 35:26 for the gold medal. Linda Villumsen (DEN) battles her way in to 2nd place as out-going Champ; Neben was down on Armstrong all the way round.

“It’s the best feeling in the world!” Kristin Armstrong said when congratulated on her win. 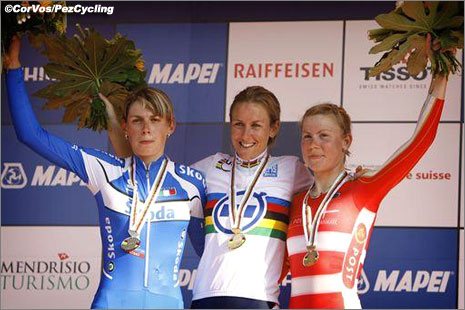 If the men’s TT tomorrow is as half as exciting it will be great! Stay Pez for every kilometre!

Inside The U23 Worlds TT With Alex Dowsett