Wrapping Up Worlds With Rubens Bertogliati

It’s all very well sitting on the sofa watching the Worlds, speaking words of wisdom in between mouthfuls of beer and handfuls of pretzels; but to get the real story, you need to speak to a man who pedaled those hard roads of Mendrisio. We gave Fabian’s loyal lieutenant, Rubens Bertogliati, Monday to recover; then hit the Diquigiovanni man with the questions on Tuesday morning.

PEZ: The Swiss game plan, Rubens?
Rubens: We had the strong man in Cancellara, he proved at the time trial that he was in super condition; it was all about him – he was the man to protect.

PEZ: Were you happy with your own ride?
Rubens: Yes, these were my own roads – my name was even painted on them! It was important that I show myself for all the people who know me and who were there. I did my job covering the break; there were men there who could win – Ballan, Cobo, Paolini and it could have gone all the way. It wasn’t our job to drive the breakaway, just to cover it – I think that if Fabian had made that break then it would have gone all the way. 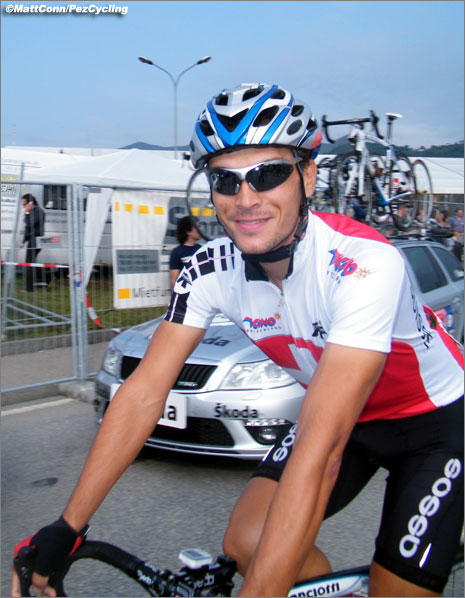 PEZ: You were in that break for a long way.
Rubens: From lap 12 to lap 18; when the original ten man break went I was off the back, I punctured on the descent and lost three minutes – I had to chase for a lap, through the cars to get back. I did my job during the race, I am happy with my performance; I would have liked to finish – I rode 18 laps – but I was very, very tired at the end, all of the riders in the group I was in turned in to the pits – I would have been alone on the road.

PEZ: Oliver Zaugg rode a good race for Switzerland, too.
Rubens: He was really strong, he came out of the Vuelta in good shape – the bulk of the first 30 rode in the Vuelta and I think all of the top 10. On a course like Mendrisio it is essential that you have a stage race like that in your legs – there is no way you can do the equivalent training at home.

PEZ: How did Albasini do?
Rubens: He was very active for team early on – but he crashed early on in the Vuelta and didn’t have the racing that you need for the Worlds. 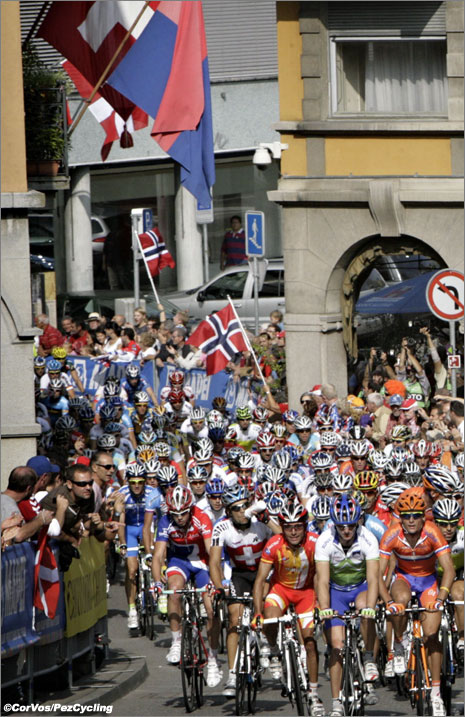 Rubens was active and present at the front of the race throughout the day. He’s enjoy some water here.

PEZ: The circuit was tough, but the race didn’t ignite until very late.
Rubens: Yes, but in the World Championships everybody is waiting, maybe waiting too much! It was a hard course and Evans won well, it’s good that we’ll see the rainbow jersey to the fore on the big climbs in the Grand Tours, that’s something we’ve not see for a long time.

PEZ: Riders had their jerseys flapping open almost from the start.
Rubens: In the morning it was not so hot, but as the day went on, with all the people around the circuit and the sun higher in the sky it went to 25 degrees; which is hot for Switzerland in late September. It was good day to race on and also good for the organisers because it showed Mendrisio and our country in the best of lights.

PEZ: Evans – a shock?
Rubens: No, he was strong in the Vuelta; the first half of his season was disappointing but in Spain he was there all the time with the big riders. In the World Championships he was a favourite; he lives only three kilometres from the circuit and his attack came at exactly the right moment – and he was strongest on that last climb. 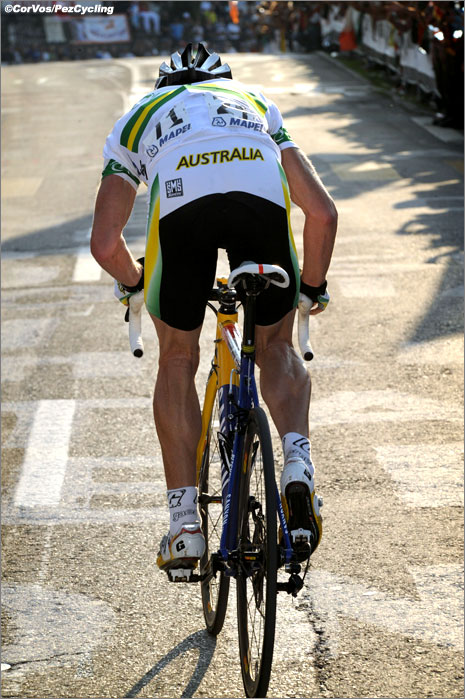 PEZ: Italy; the team rode well, but Cunego didn’t have it.
Rubens: Their tactics could have been a little better but there comes a point where you need the legs – Cunego didn’t have them. I think maybe he should have finished the Vuelta; last year he finished it and was second – this year he stopped after the second week. At home, no matter how much training you do, it’s not like racing in the Vuelta – I think the difference was his not riding that last week in Spain. In the first two weeks of the Vuelta, Cunego was stronger than Evans!

PEZ: Scarponi worked so hard – for nothing.
Rubens: Italy was a really strong team, all of their riders were team captains in their own right; but when the DS says to ride, that’s what a rider like Michele does – he did a good job.

PEZ: Spain; shouldn’t they have told Rodriguez not to work?
Rubens: The Spanish were the strongest team and Rodriguez was the strongest on the climb – but Valverde and Sanchez are faster at the finish line. I think they marked Fabian too tightly, but I just don’t think they had the legs when Evans went; ten seconds isn’t a lot to bridge on a three kilometre climb – it was possible.

PEZ: Kolobnev.
Rubens: He always does the Vuelta and is always strong in the last races of the season. He’s a strong man, always there in the one day classics; he’s a dangerous guy – in the Gilbert mould, but Gilbert is perhaps a little more explosive.

PEZ: Cancellara?
Rubens: I think that he is happy in his heart, but he felt that he had the legs to become the first man to win the time trial and road race at the Worlds. It’s not easy to accept defeat when you have form like that. He rode a good road race but he was very tightly marked; I think he should have played a little smarter by not showing how strong he was on the climb. On the last lap he made that big effort on the first climb, I think that he should have saved that effort for the descent – if he had got away, he had the strength to ride all the way to the finish on his own. 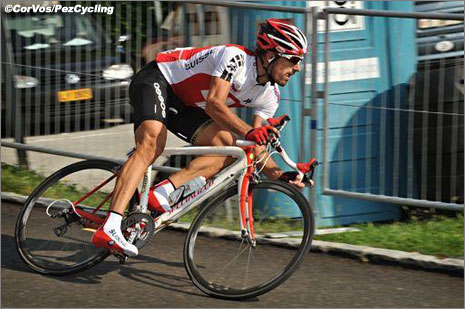 PEZ: Last question – the legs, on Monday morning?
Rubens: Very, very bad! After 250 kilometres like that, they are always very bad! On Monday I had a complete rest day, no bike at all, but today I will do two hours, easy. Now I have the late season Italian races – up to Lombardia.

More bad legs to come, then!

***
With thanks to Rubens for his great insights all through what was a cracking Worlds series in Mendrisio.