All Roads Lead To Copenhagen: The Grand Finale

It has all come down to the final two nights of racing. In one of the most prestigious six day events of the year, the racing is certain to be furious over the final two nights. Come along for the ride with Ed Hood, as he gets us in close for one last look into the world of the Six for the 2010/2011 season. 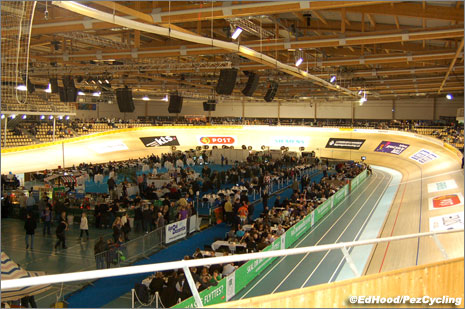 The events take place on a BIG track.

It’s not a mistake; the lap board does read 300 for the last chase. That’s 300 laps at 250 metres; 75 kilometres. If your arithmetic isn’t so good – that’s somewhere around 47 miles. And there’s a twist, it’s a handicap, with the ‘heads’ giving away up to seven laps to the ‘little’ teams. 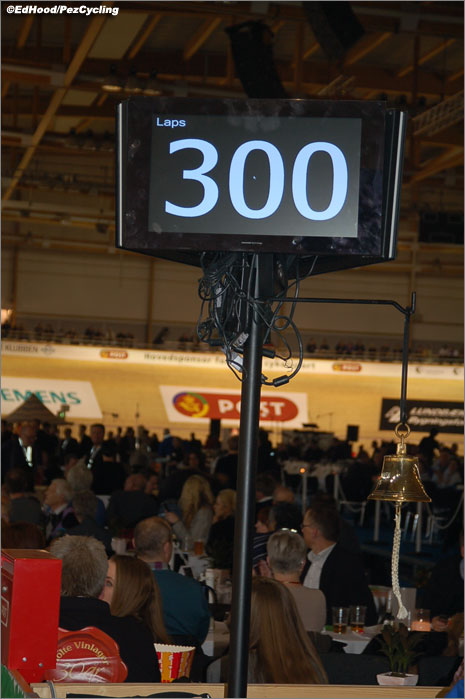 It’s always a good race, two years ago Jesper nearly stole it late in the night, and last year it looked like Colby and Hollywood had it in the bag ‘till Danny Stam pulled rank on them.

I missed the start, the same old stuff – empty the nasty pails, sort out what washing you can, empty the rubbish bags, fill the bottles for after the race, get the drinks ready for the race . . . 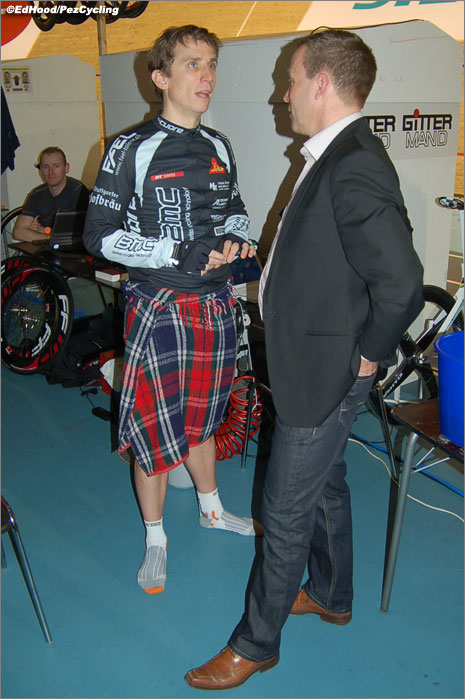 For a long time it looked like the Russians had it all under control; then suddenly there were two Russians ‘resting’ and no Russians racing – ‘dah svee-dah-nee-yah, comrades.’

The sounds were good, Alcazar, Jerry Lee Lewis, Rick James, Elvis, Kiss but it was busy for us tracksiders with six thirsty boys on the boards. There were bottles coming and going like crazy. 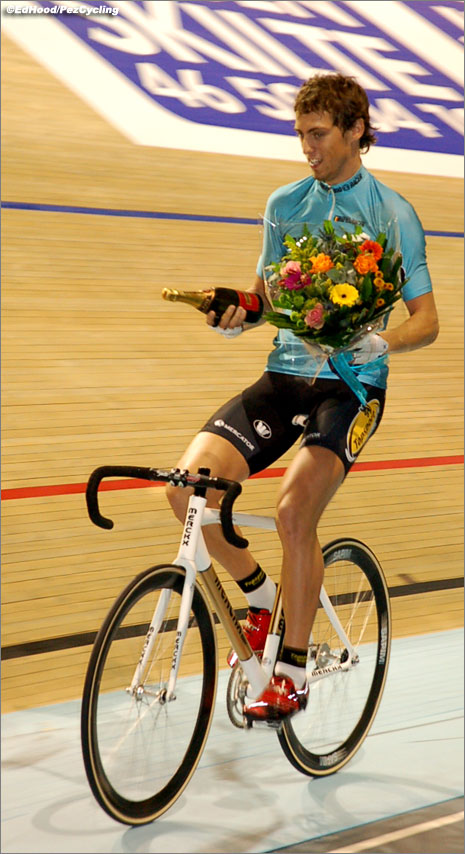 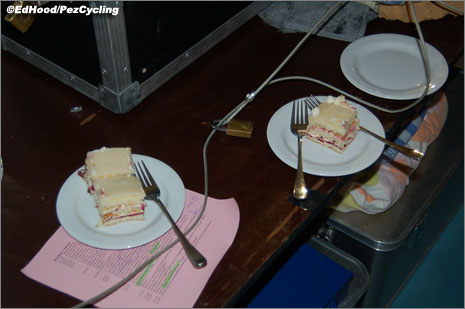 With 50 to go it looked between Colby & Seba; Jesper & Stopler and Michael Smith Larsen and Yoeri Havik, but the Czechs Jiri Hochmann & Martin Blaha bridged up to the zero lap and come sprint time, were in the home straight with the other three teams still in the back straight; ‘with their doors blown off’ as Colby might say. 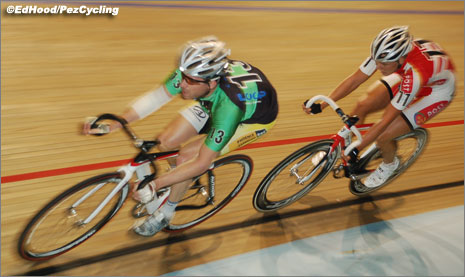 The man of the night, Martin Blaha.

Good racing in front of a decent and enthusiastic crowd.

The early programme was the usual, starting with the sprints – with one of the young Danes copying Big Bob Bartko’s routine by wearing the backpack he won in the first sprint, for the rest of the series.

He didn’t get many laughs. 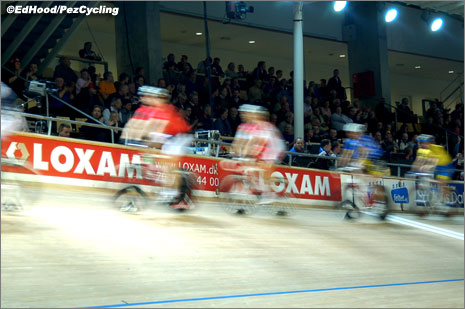 There was a pretty good crowd. 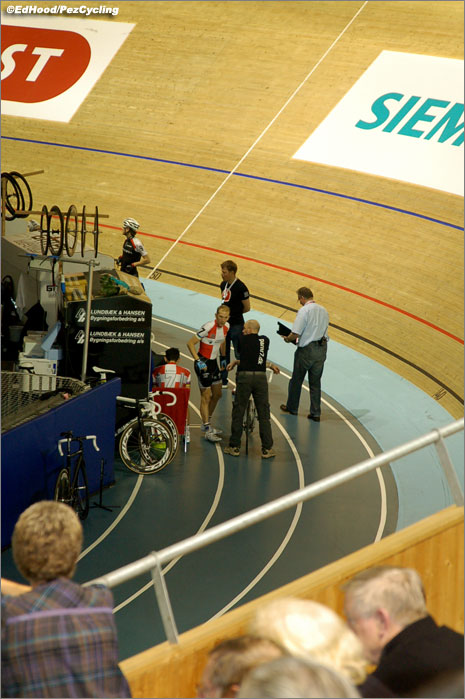 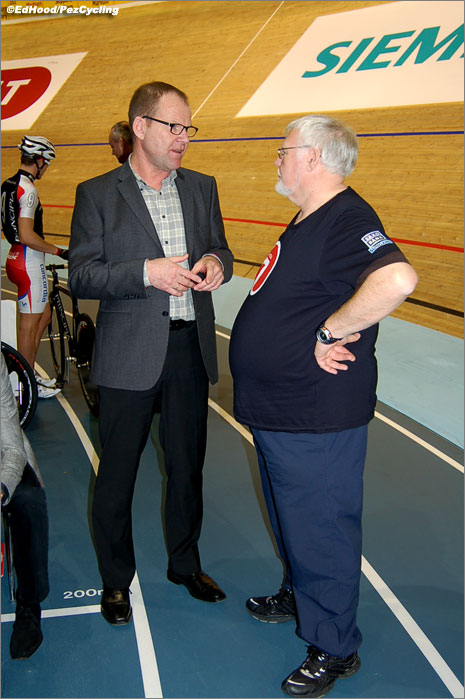 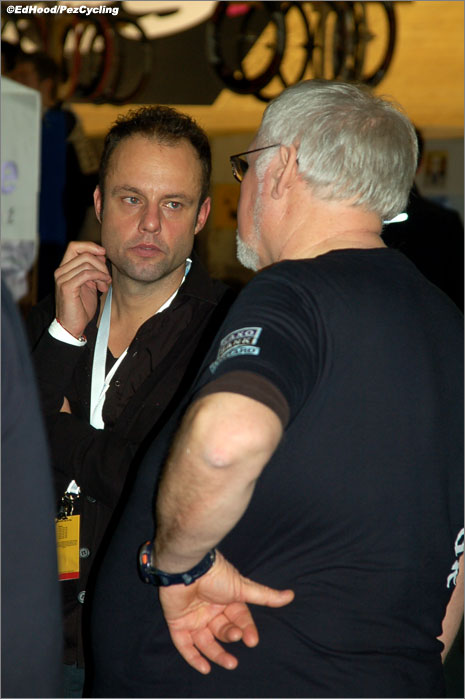 Bjarne looks good, lean, tanned and fit; HH has lost weight too and looks good – Bo hasn’t bulked up either but still has his hamster cheeks. 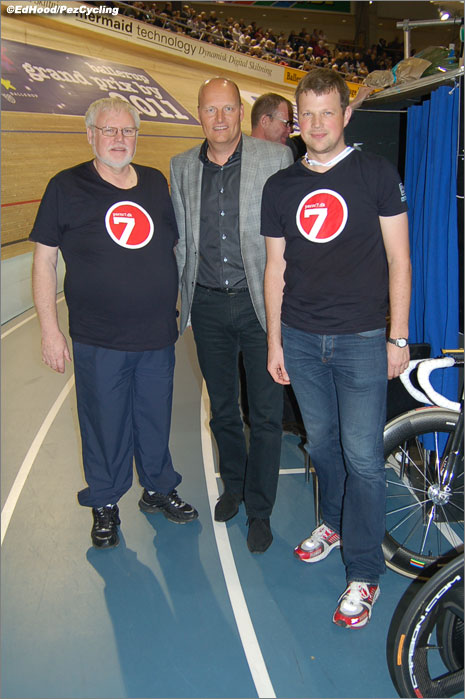 With the treatment Riis gets from a lot of the Media, it’s small wonder that he’s guarded around journalists – most of the UK magazines have written off Saxo Bank as a force for 2011.

It seems to have slipped their mind that Fabian Cancellara’s star was not a consistently bright one until he came under Riis’s tutelage – the Dane is a man who gets the best out of riders.

With a team of talented and keen young riders it’s best to wait until the wheels start turning in earnest – from Het Nieuwsblad – before saying that the Danish team will have a bad year. 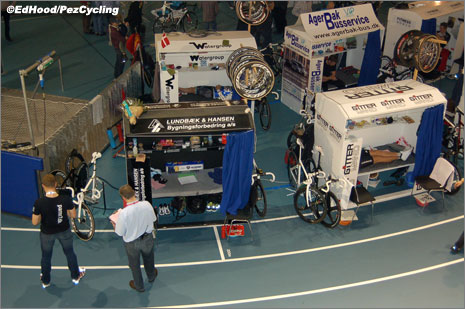 Before the serious stuff kicked off, we took a wander up to see the Par nr. 7 concession stand which Michael has master minded. The man is a perfectionist so there’s no ‘tat’ just good looking kit. 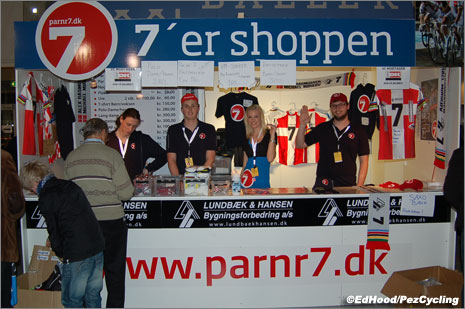 Alex and Michael were quick in the 500 TT, and then it was balustrade time – Dario G, a happy crowd and 29 of the world’s best riders.

Franco is out, for keeps this time, he’s not well and whilst he rode the early part of the programme, there was no way he could ride the Madison. 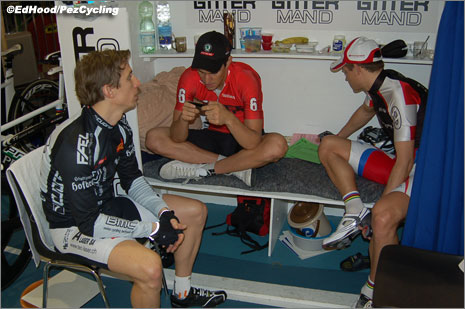 And after all that we made our beds for 01:30, I almost felt guilty. 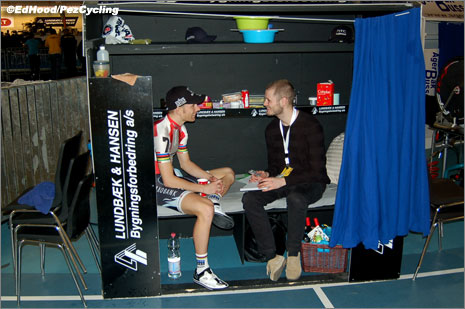 It’s late, but the interviews go on.

There’s one day to go, no washing to do – and eight months ‘til Grenoble. 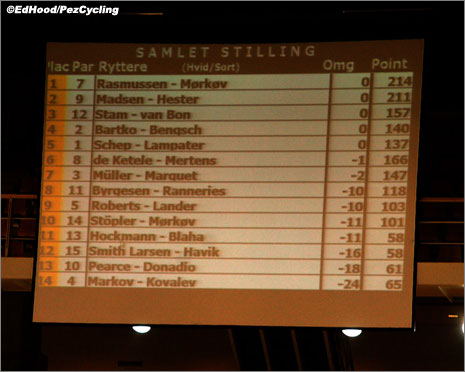 Here is how it looks with one day to go.

Day Six
The Little Mermaid ponders the swans and pleasure boats in the harbour, the sky overhead is blue; it’s a lovely crisp morning in Copenhagen. 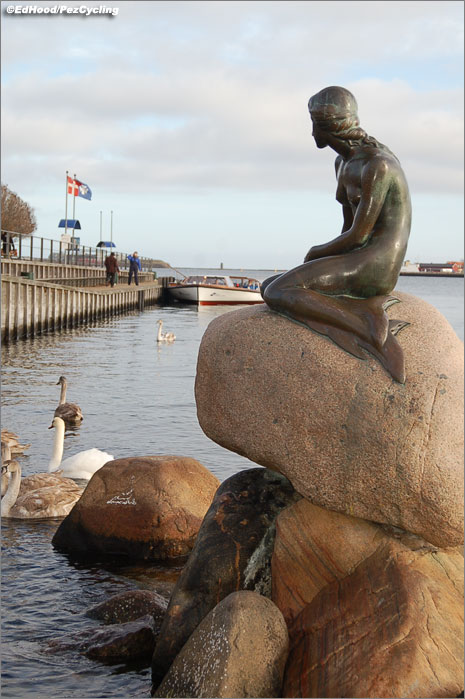 Was it just last night that we saw Danes Jens-Erik Madsen and Marc Hester announce their arrival as top men on the six day scene ?

The winners were never in doubt; Michael Morkov the stylist supreme and Alex Rasmussen, laid back compared to his perfectionist partner, but strong, fast and a perfect fit with Morkov. 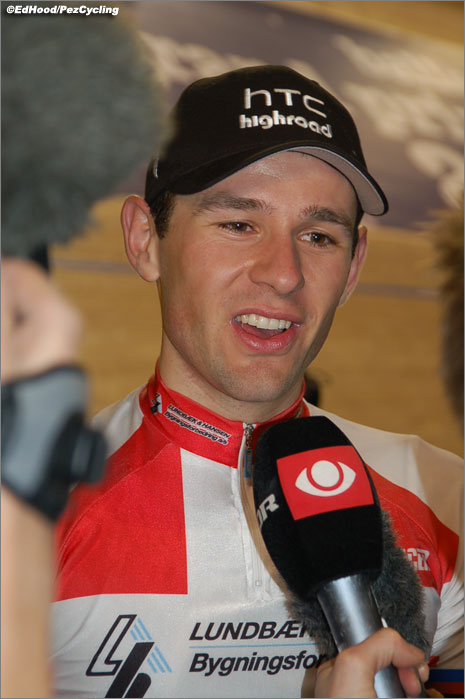 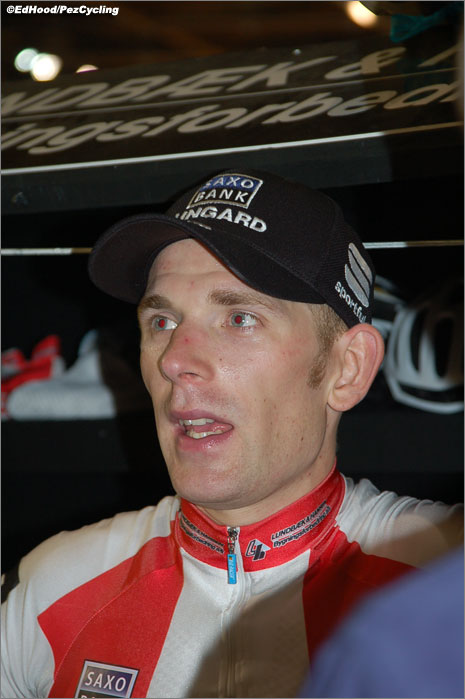 No, there was little doubt that ‘Par nr. 7’ would have their name painted up on the fence for the third time. 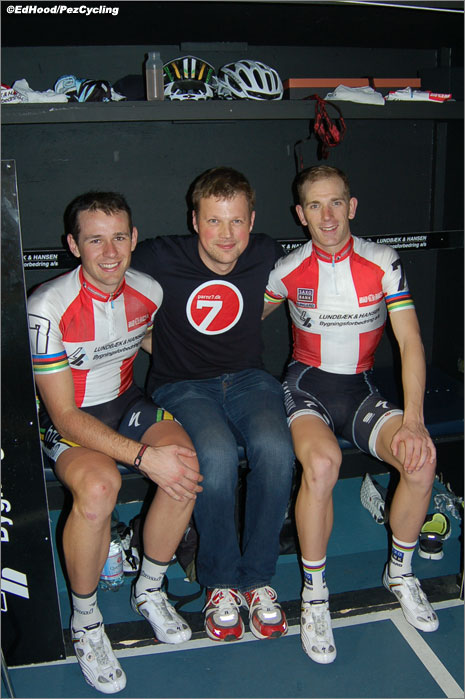 But Danny Stam and Robert Bartko are both podium lovers and it was by no means certain that ‘Par nr. 9’ Madsen & Hester would make one of the three magical steps. 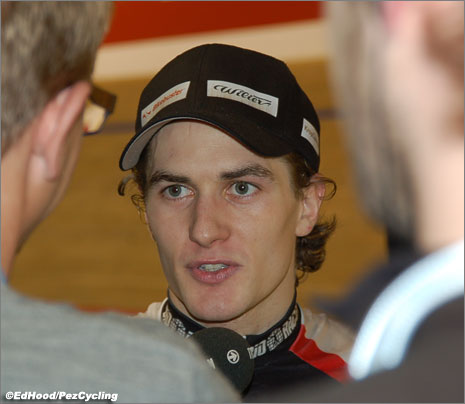 The two have podiums in Grenoble and Bremen already this winter and were solid all week in front of friends and family riding the track they grew up on.

It was late in the evening when Pars 7 & 9 secured the lap that placed four Danes in the top six in front of a full house of partisan fans.

Stam & Leon Van Bon took third to round off the podium for Holland.

Before the hectic pro programme kicked off Martin and I decide to watch the climax of the UiV Under 23 six day. 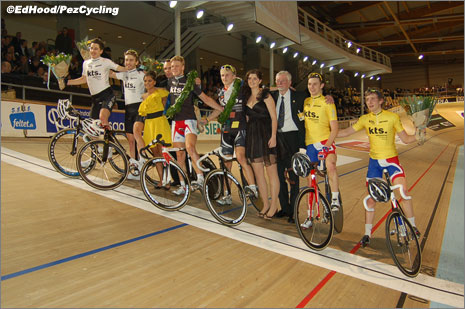 We also took time to pop in to the Ballerup Stadium’s Ole Ritter ViP Lounge. 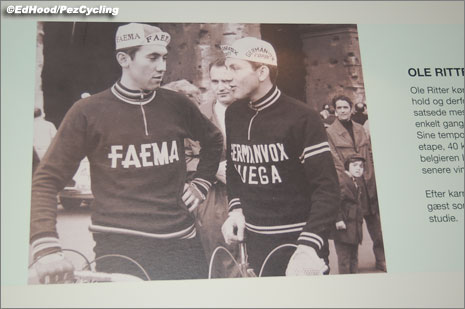 There have maybe been cooler riders than Ole Ritter – but I just can’t think of any. Best known for his 1968 world hour record, Ritter was an accomplished roadman, world class pursuiter, stylish ‘chrono man’ and strong six day rider with three wins.

The lounge has great pictures of Ritter on the wall and lists of his palmares – all nicely done; good to see a great rider honoured. 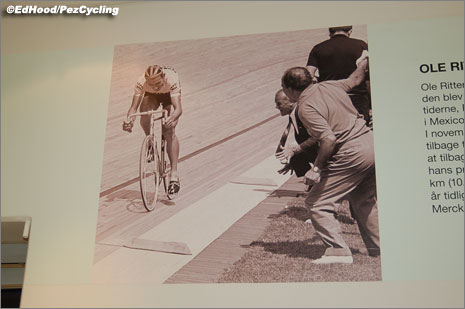 The stadium was packed and posses of ViP’s contrived to get under our feet, all evening.

One gentleman said to me; ‘it’s very fascinating,’ I nodded but really meant; ‘it’s much less fascinating if you’re trying to keep five nervous riders happy, my friend !’ 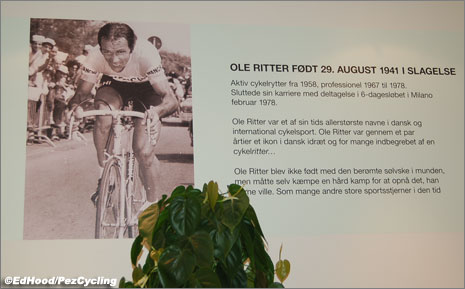 For a final evening, it was a hectic programme – opening with an extended sprint series before a 30 minute chase.

As well as ViP’s the Media were out in force with a permascrum around the cabins.

Franco popped in, illness prevented him from riding the last night but it was good to see him, relaxed and happy at the prospect of four weeks off the bike – starting today.

Big Bob Bartko – who hasn’t sparkled all week – surprised us all with a dazzling 12.834 track record for the flying lap; albeit Jesper Morkov reckoned the German had ridden ‘a very, very big gear.’

There was a also 500 metres TT, a team devil, a Derny final – won by Michael – and a Derny Spurt.

The ‘holder up’ of the rider in front of me had a pair of long ‘chisel’ toed shoes on his feet. ‘This’ll be tricky’ I thought to myself; this was confirmed as the best pace he could raise when the gun fired was a sort of constipated shuffle. It was so hectic that I didn’t manage to clock much of the music, but ‘Voyage’ by Voyage sunk in and was cool.

The warm up for the final chase was the Balustrade Sprint; Jesper led the string, dispensing Par nr. 7 merchandise into the crowd as he rode, before ripping off his jersey Incredible Hulk style and riding around the top of the banking stripped to the waist, hands off – we believe that the UCI commissaire was given a 75 cl. beer and sent to Ole Ritter lounge for the duration of this event. 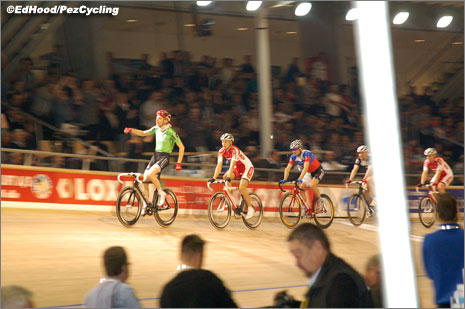 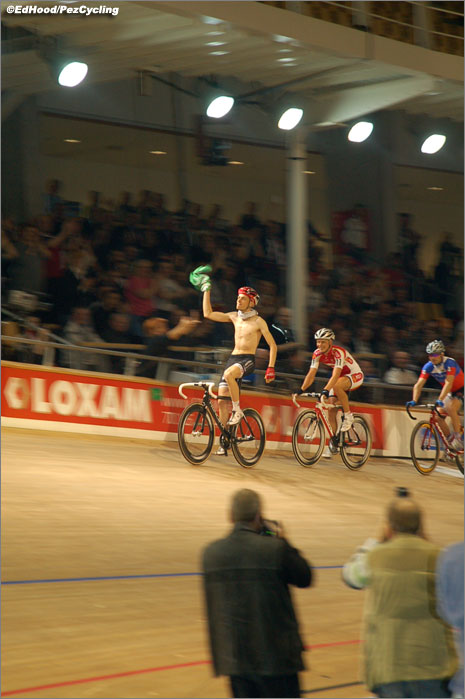 Organiser Henrik Elmgreen chased the riders out on to the track in time for the 11:00 pm live TV link.

The photographers scrummed around Par nr. 7, the pistol cracked, the smell of cordite filled the air, the bongo drums thumped as ‘Cara Mia’ spilled from the speakers and Morkov & Rasmussen were only 60 minutes away from their hat trick. 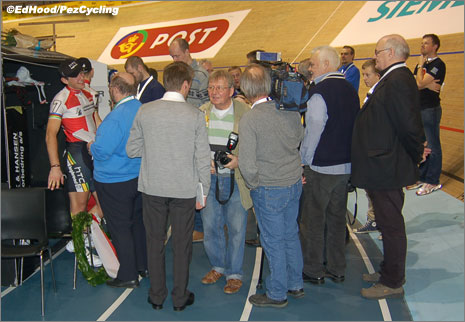 God willing, PEZ will be there. 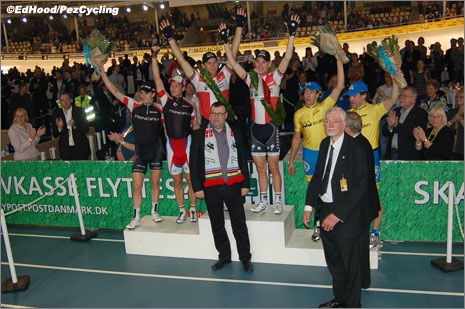 We hope you’ve enjoyed reading our coverage of the six days this winter as much as we’ve enjoyed writing it.

See you in Grenoble, come October ?

All Roads Lead To The Copenhagen Six, Part Two