All Roads Lead To The Copenhagen Six, Part One

It’s hard to think of it as such, since it’s only February, but as Ed says, it has been a long Six Day season. Starting in the fall and staying hot all winter long, the season draws to an end in Copenhagen. Copenhagen is no dull swansong though. It’s a great stop on the circuit, and well, even if it wasn’t, with Ed running, it would be worth reading about. Let’s head in for a look at the first two nights!

D minus one.
I’ve got Bill Withers on the laptop, ‘Lean on me’ – the bedding is white, crisp and clean; the shower room tiles shine like they’re in a Ducati dealership.

It’s been a long one – we broke camp in Berlin at around 02:00 am, drove for three hours to Rostock, slept in the camper for five hours, then caught the ferry across the Baltic to Gedser in Denmark.

There was another couple of hours driving across frosted, grey, flat fields to Copenhagen airport to pick up our masseur, Martin. 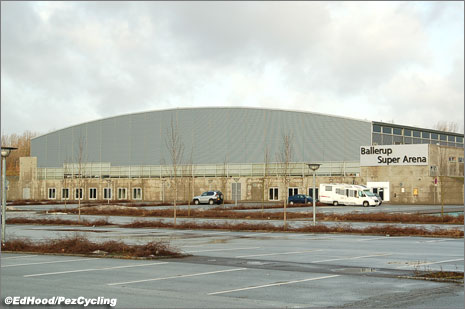 Another drive to Ballerup ‘Super Arena’ and then the set up – not to mention a mountain of washing from Berlin.

We deserved our pizza – and I love the rooms here in the Ballerup Zleep hotel, spartan, but clean and cosy.

Ballerup Super Arena is around 30 minutes by road or light railway from central Copenhagen and home to the 250 metres of smooth boards where tomorrow the 49th edition of the ‘6 Dages Lob’ of Copenhagen starts – and PEZ is there. 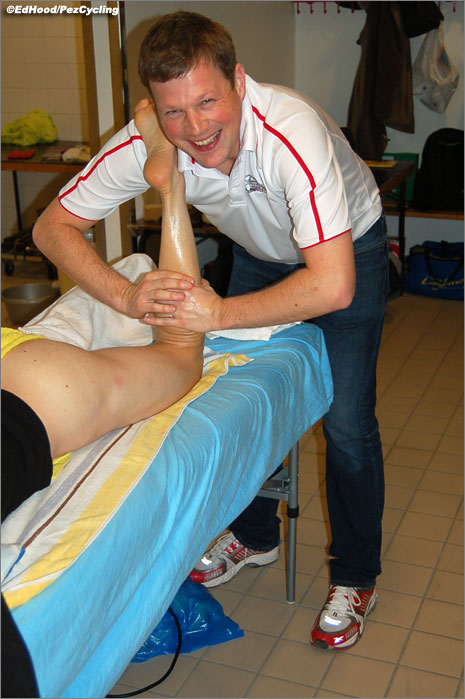 Martin and Colby as the night progresses.

Day One
‘Dopers suck’ says the motif on the back of Colby Pearce’s track top – we’ll drink to that! 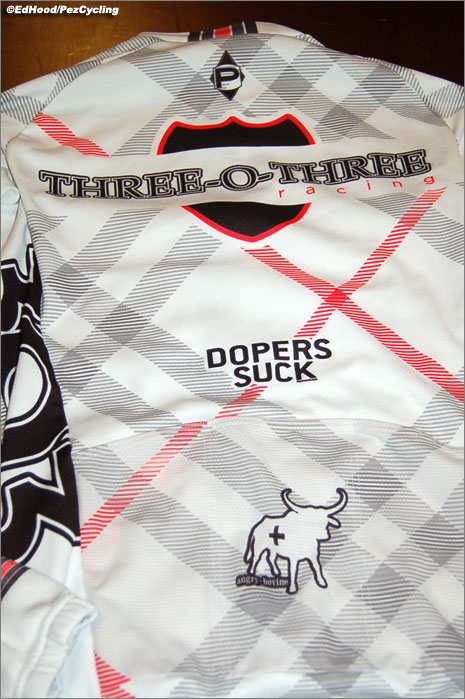 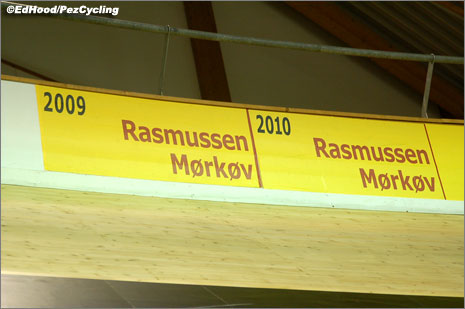 Colby doesn’t ride with his usual crazy compadre, Daniel Holloway – aka ‘Hollywood’ – the organisers have paired the Colorado man instead with crooning Argentinean Sebastian Donadio; but the speaker refers to them as ‘Americans.’

I guess the continents do share the same second name. 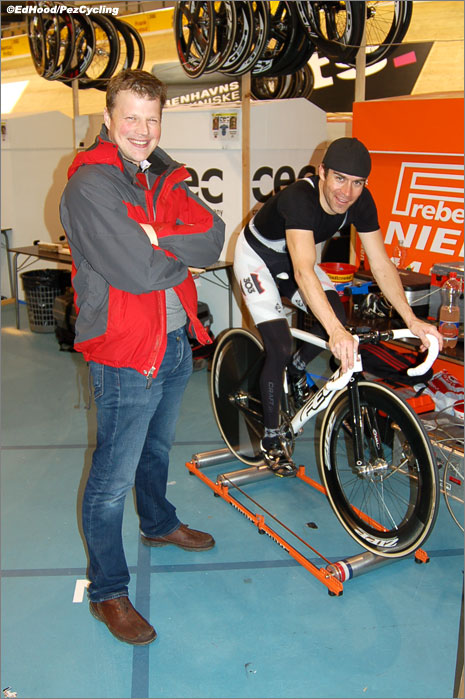 Colby is in our cabin along with regulars Franco Marvulli, Alex Rasmussen, Jens-Erik Madsen and two Morkovs – Michael and little brother Jesper. 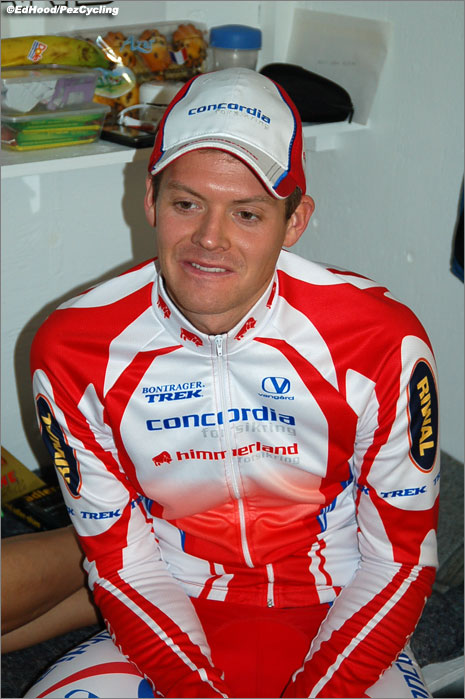 Jens and his new kit.

Jesper spent last season racing for a French club near Paris and was winner of the recent Berlin U23 six day.

Jesper is easy going and light hearted; whilst Michael’s attention to detail is becoming legendary – the official race jerseys are always cut big so as they can fit most riders. This means that they stretch to fit a Big Bob Bartko, but on a whippet like Michael they ‘flap’ a little in the slipstream. That’s no good to our Michael and he appeared with specially made extra small jerseys for himself which cling like a skinsuit – and of course we had to fit the Saxo Bank and Sungard logos. 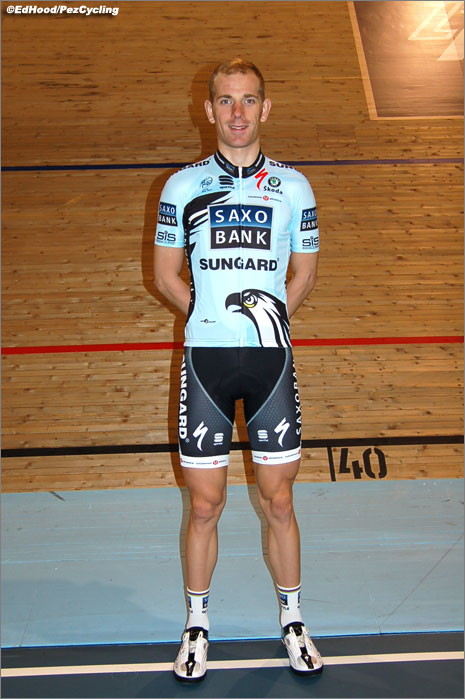 Six riders in the cabin isn’t too bad, especially since we have additional help from Martyn and Frank, who helped with the massage in 2010 and is back again for this year. 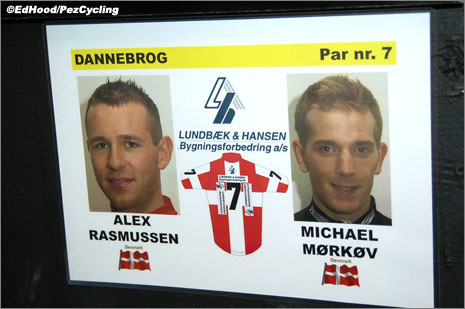 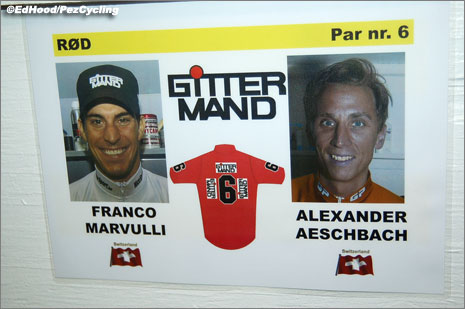 The field is strong; whilst Home Boys Alex and Michael have won for the last two years, there are some big guns lined up here: 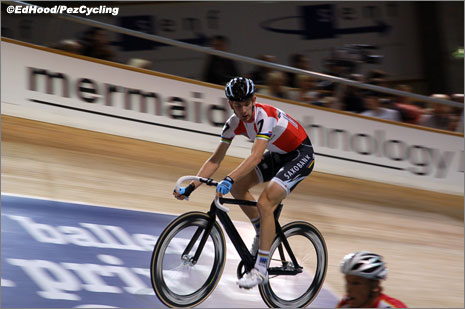 Peter Schep (Holland) and Leif Lampater (Germany) – Schep triumphed at Gent with Iljo Keisse and looked like he was going to win at Rotterdam with Theo Bos until Bos had to pull out with illness; and Leif is very fast – he holds the lap record here in Copenhagen with 12.867.

Robert Bartko and Robert Bengsch (Germany) – ‘Big Bob’ as we like to call him had had a good season, he won in Zurich with Hondo, Bremen with Bengsch, and at Amsterdam and Berlin with Roger Kluge. 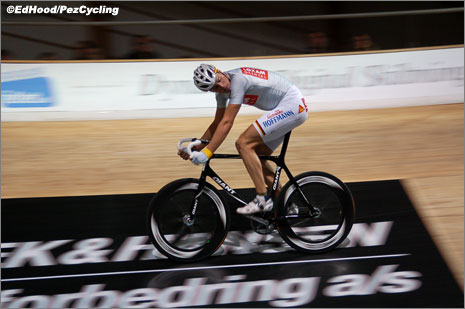 Bartko doesn’t get a lot of column inches in the English speaking press but he’s one of the best track riders of his generation – former World and Olympic individual and team pursuit champion, he’s a stalwart on the six day circuit, but was a good roadman too – not many duds win the Three days of West Flanders. Bengsch is another in the ‘big strong boy’ mould, like Bartko and Kluge – he was very impressive against the watch in Berlin.

‘Our Franco’ and partner Alex Aeschbach (Switzerland) have had an ‘OK’ season, they won down in Grenoble and were second in Zurich and Bremen but their season has been blighted by illness. 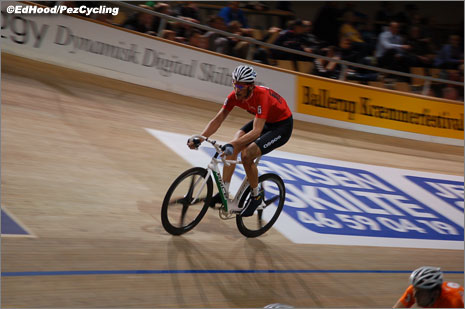 And then there’s Danny Stam and Leon Van Bon (Holland), winners in Rotterdam and on the podium in Amsterdam, Grenoble and Zurich. 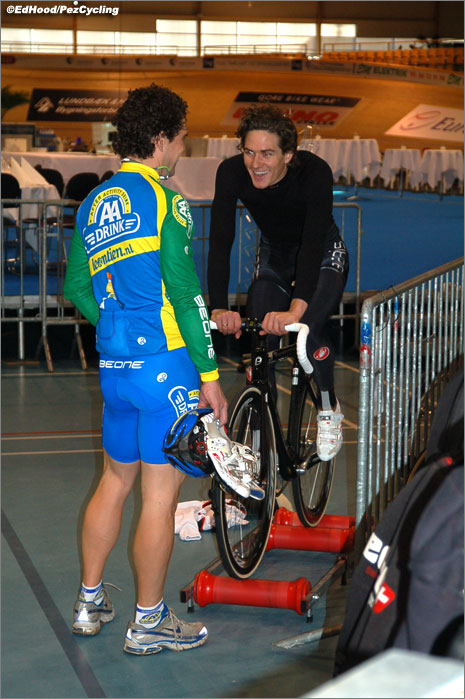 The PEZ take? Alex and Michael will win, but it’ll be no push over. 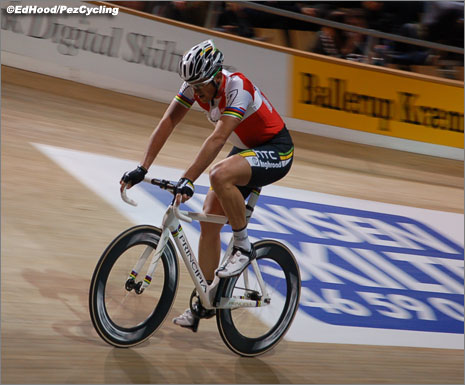 ‘Cara Mia’ blasted – I’d forgotten about that – the pistols ‘cracked’ and it’s ‘game on.’

Unfortunately, that was about as exciting as the first chase got.

Copenhagen is ‘old school’ – the night opens with a 60 minute chase; for me, it’s counter productive, best let the guys warm up with a points race or sprint series and keep the chase ’til a little later and 45 minutes duration.

One hour straight off into a chase will mean conservative racing – everyone is scared. 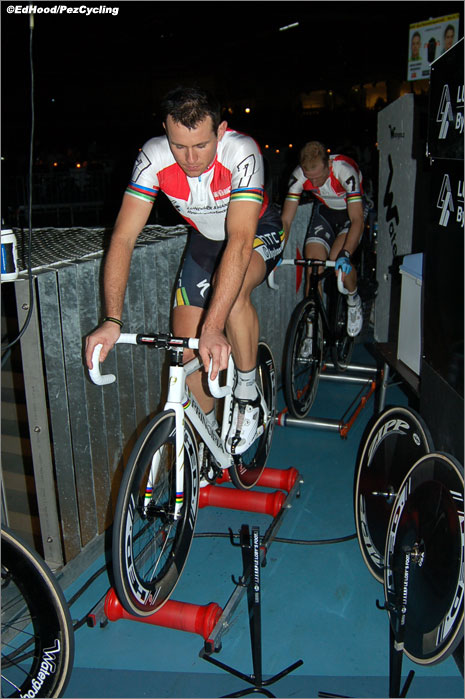 Warm up for the chase.

The music was good, though – Kiss, ‘I Was Made For Loving you’ and Rod Stewart. ‘Do Ya Think I’m Sexy ?’ The way big Bengsch was looking – mouth open gasping for air and head slumped between his shoulders – that would have to be a ‘no’ to Rod’s question.

‘In Zaire’ for the Dernys – I’d forgotten about that, too – Michael wins one and Alex wins the 500 metres TT.

AC/DC and ‘Thunder Struck’ for the flying lap; the Russians get the extended mix of Boney M’s ‘Rasputin’ – but it can’t motivate them to beat quick Suisse, Tristan Marquet who rides with solid German, Andreas Muller.

I like the Derny-Spurt, a kind of giant keirin where one rider from each team contest a 15 lapper, the first 12 ‘omgange’ – that’s ‘laps’ in English – behind the little motor bike with the last three laps free for all.

Tim Mertens of Belgium took the ‘Ballustrade Sprint,’ where the riders do the hands off, clapping thing as they track the fence to Dario G’s ‘Sunchyme’ then dive for home with two to go – it’s cool to watch.

But they did play ‘Crying at the Discoteque’ by Alcazar.

Friday tomorrow, the crowd will be bigger and maybe they’ll go faster . . .

Day Two
‘The track is yours, gentlemen,’ says Henrik Elmgreen, the organiser to the riders as the session kicks off – I liked that; talking of good use of language, Martin was telling me that Belgian Kenny de Ketele isn’t impressed with the nickname Cav has given him, ‘Kenny de toaster’ – kettle/toaster ?

Well, I thought it was funny. 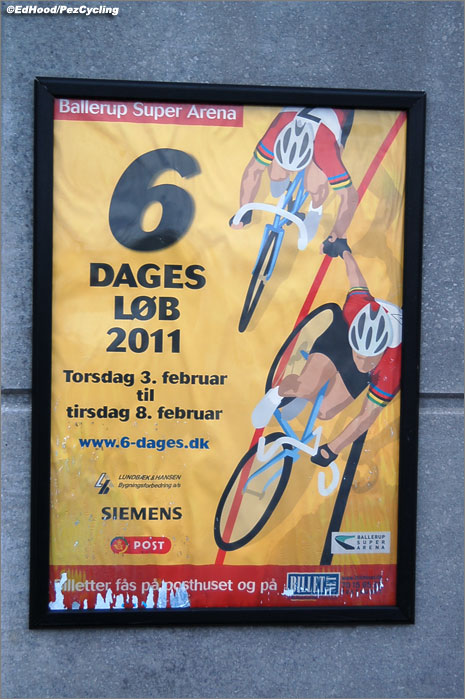 Again it wasn’t the greatest night for madison racing; but it’s been a long season, the crowd was small, there’s no Iljo, Franco pulled out with a saddle sore and the whole circuit is still trying to get used to ‘life without Bruno.’

Colby and Seb were out of the team devil, early; ‘it’s a long night and we have a one hour chase to finish’ Colby explained. 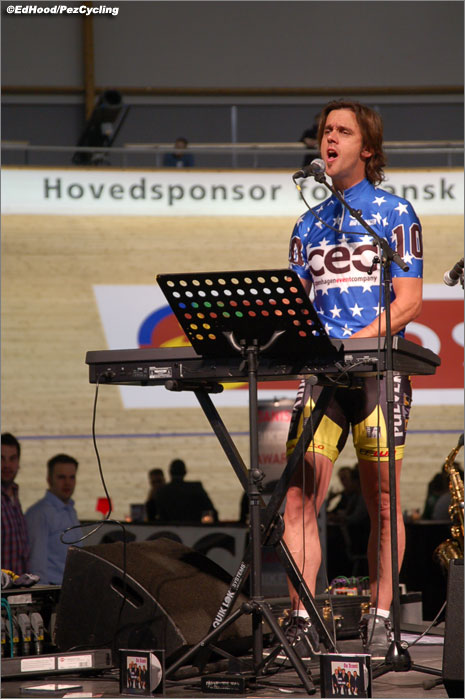 Don’t forget that Seb can sing too!

The first chase was only 30 minutes and that was where Franco pulled out – he’s not himself at the moment, he hasn’t fully recovered from a bug he picked up in Tasmania and his head is down a little. As a man and a rider he wears his heart on his sleeve, a bad head for Franco means all else is bad – and with a good head? 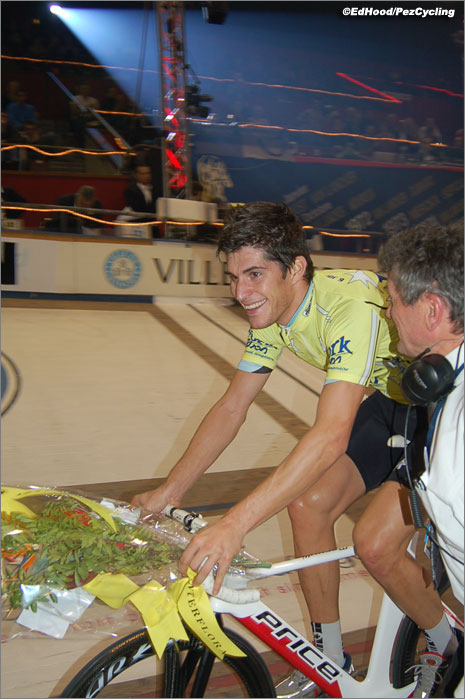 In good health and good spirits, Franco is nigh unstoppable.

Dernys; and Michael wins, the other big Derny tune is, ‘The Race’ by Yellow – cool. 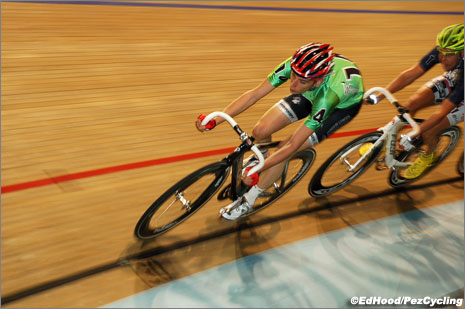 There’s a three grand watch on offer for the rider voted most handsome by the crowd (isn’t that sexist ?) and our boy Alex has polled the highest vote both nights, so far. I remember the first time I showed Marlene a picture of Alex; ‘Oh, what a handsome young man !’ huh ! 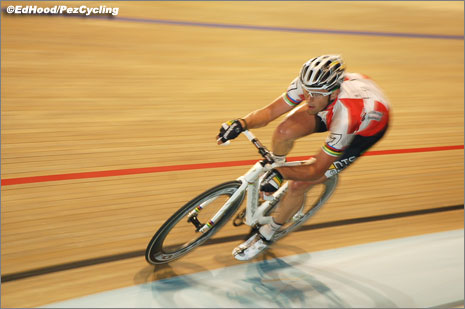 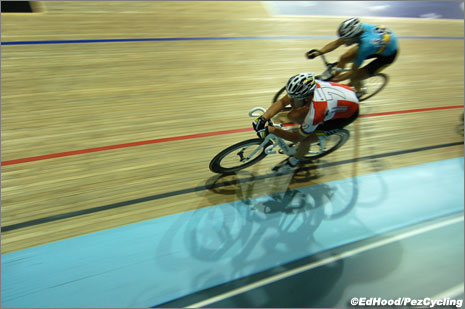 How does he do that?

I ended up pushing Colby off in the Derny; I was holding the head tube of his Felt when it began to move, I’d forgotten that the Felt has an external steerer, a la Look – a nice machine. 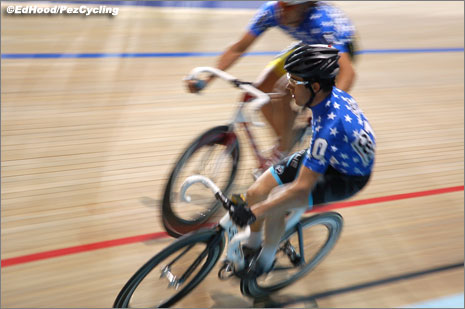 Tristan Marquet is making the flying lap his own; it’s a cool event, the 80’s pop blasts – Kim Wilde, The Knack and the like. The organisation has the teams up quickly, one after another with no messing about. It looked like Jens-Erik and Marc Hester had nailed it with 13:00 but Tristan took the big sling from Andreas Muller, gritted his teeth, kept low on the sprinters’ line and Bang ! 12:9. 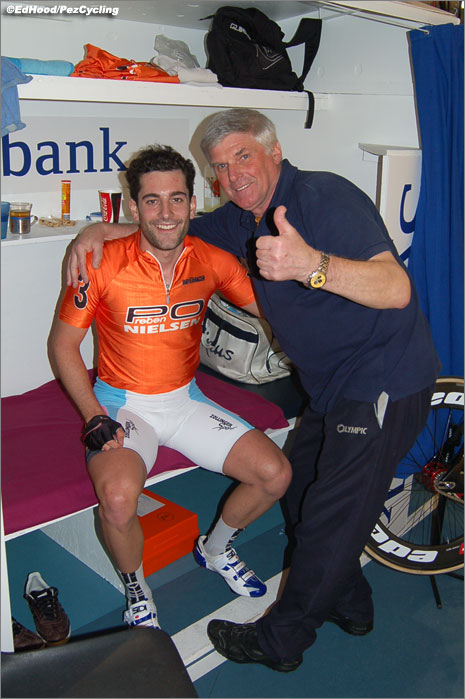 Tristan after the flying lap and michelle the soigneur. 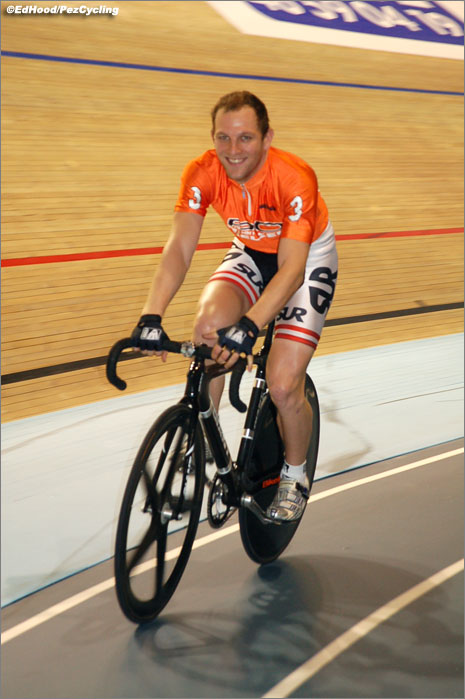 More pushing off for Ed, in the Derny Spurt – good fun.

I had to nip down to the cabin and as I came back up the steps the Ballustrade Sprint was in full flow, ‘Sunchyme’ pumping, the string tracking the fence, the lights – just so beautiful, if only we had a full house . . . 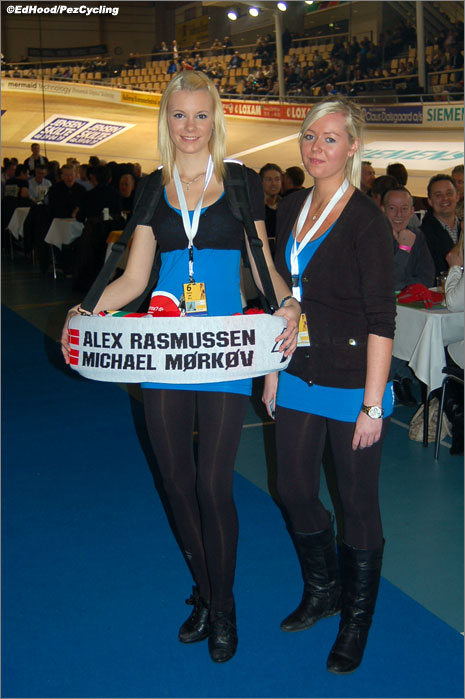 ‘Cara Mia mine’ and the chase is on, not one of the all time great madisons, but Alex and Michael won and they played Cool and the Gang, ‘Celebration’ – so not much to complain about, really. 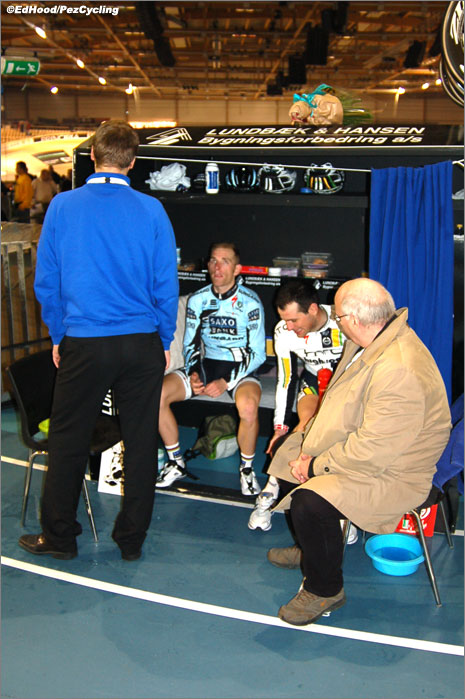 Michael reckons that ticket sales are good for Saturday night, we just have to survive that horrible Saturday afternoon session. 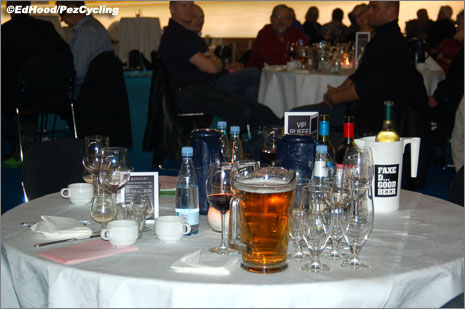 What it’s all about.

The Man Behind SpiderTech: Steve Bauer