All Roads Lead To The Copenhagen Six, Part Two

Ivan Drago looks down at me, fixes me with a stare and says; ‘with power !’ I squeak back; ‘for sure.’ It’s not actually Ivan Drago the man/machine who Sly had to put back in his box in Rocky Four, it’s Robert Bengsch; but Martin and I believe that Drago and Bengsch were twins, separated at birth. Drago went down the boxing route whilst Robert took up the bike…all in a day’s work at the Copenhagen Six for Ed!

It’s the ‘Derny Spurt’ and I’m pushing off Bengsch, who’s second in the string, usually it’s pretty light hearted at the start of a derny race – but I don’t want the big fellow coming round the cabin after the race; ‘no power, weakling !’

I put him in about 10mm from the lead rider’s back tyre, but about 10 bike lengths clear of the third rider – job done. 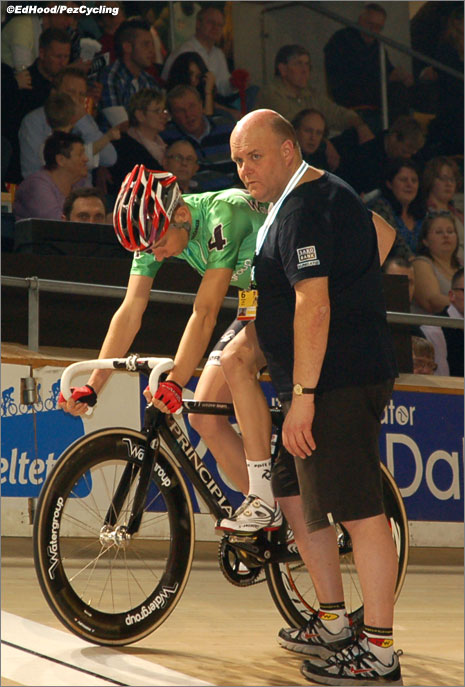 Ed is an experienced pusher offer.

The Derny Spurt provides us with more merriment when smallest rider in the race, Colby Pearce decides he want’s Bengsch’s spot on the Derny mudguard. Martin and I are reminded of one of Ivan’s lines in Rocky Four; ‘if he dies, he dies !’

But Colby is deceptive, I’ve seen that death metal on his iPhone. 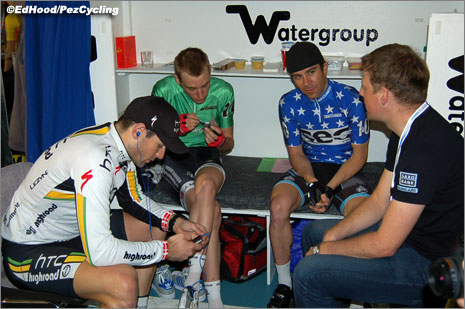 Colby listens to Martin and not death metal in this particular instance.

It was a split shift on Saturday, as you can probably guess these aren’t that popular with riders – or guys like me. The logistic jigsaw has enough pieces, without adding more. 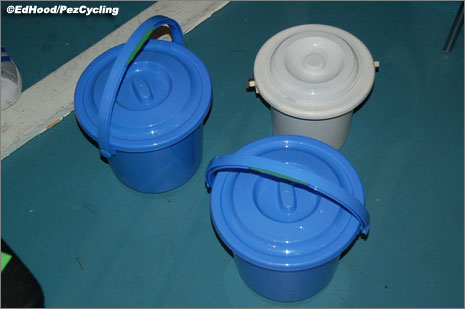 Guess what’s in there.

Jesper is a wee bit ‘down,’ he wrote of a wheel during his winning ride in Berlin; punctured here in the Derny the other night and last night, broke a spoke in his rear Zipp. Equipment to compete safely and effectively at this level isn’t cheap; it’s a struggle for young riders like Jesper. 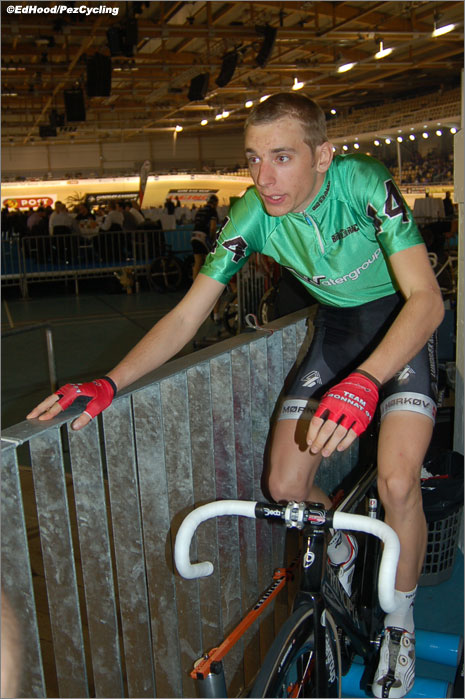 The high lights of the afternoon session were Andreas Muller ‘no showing’ for the Derny – Mr. Elmgreen the organiser was not impressed and ‘Saturday Night’ by Whigfield during the chase.

The evening sprints saw ‘Big Bob’ Bartko take the first sprint and win a backpack – which he then wore for the rest of the series. It’s not often he does ‘humour’ and the cameras were clicking all over the place. 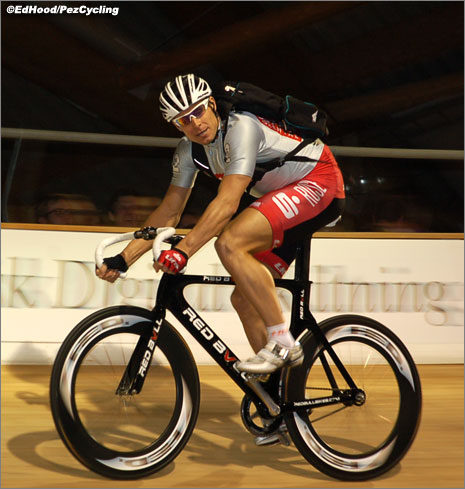 Big Bob and his (big?) backpack.

Last year we were ‘treated’ to the local sprinters every night; this year they’ve wisely restricted it to Saturday night only. 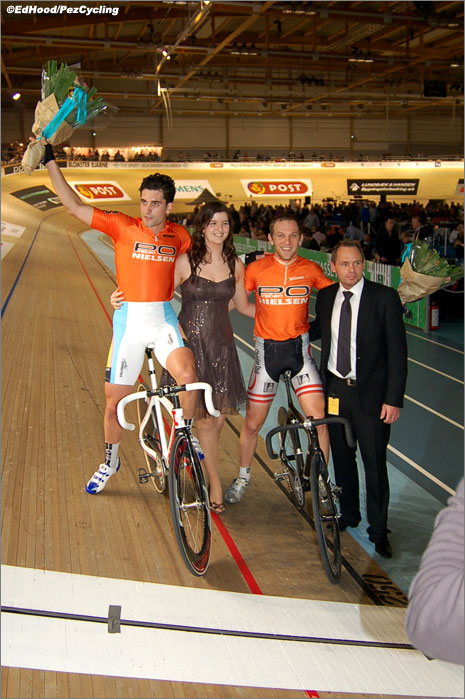 This isn’t like the sprint tournaments at Grenoble or Rotterdam with guys like Gregory Bauge or Teun Mulder – it’s just local guys. One of them is a really heavy kid, he’s way over weight but he struts about in his skinsuit and adds a cowboy hat just in case he’s not conspicuous enough – bizarre. 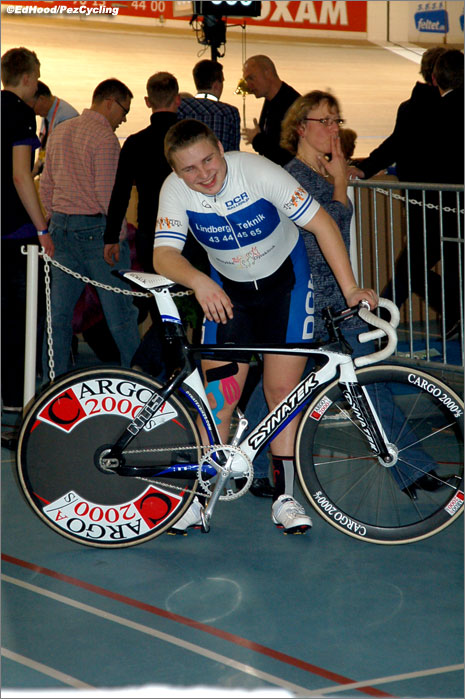 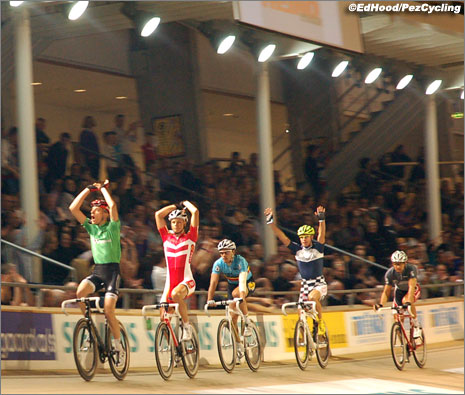 DAY 4:
Sunday afternoon, up early but an early finish – 6:00 pm. Once I’d gone through all my clothing, bottle and cabin rituals, I had just a little time to sit, catch up on the world of cycling, send my pictures and listen to some music.

The track is a nice place to be before it all kicks off, one or two riders circle the boards, the 1/8″ pitch chains rattle nicely as the stadium guys get the place ready and there’s no drama – something that’s never far away in a six day. 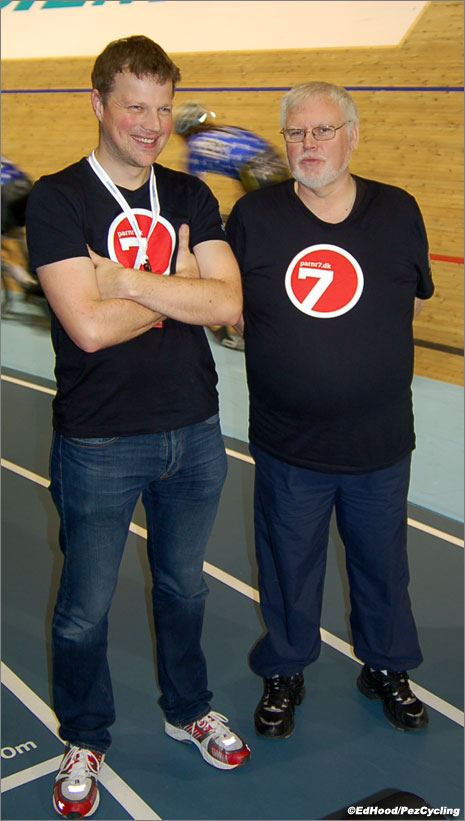 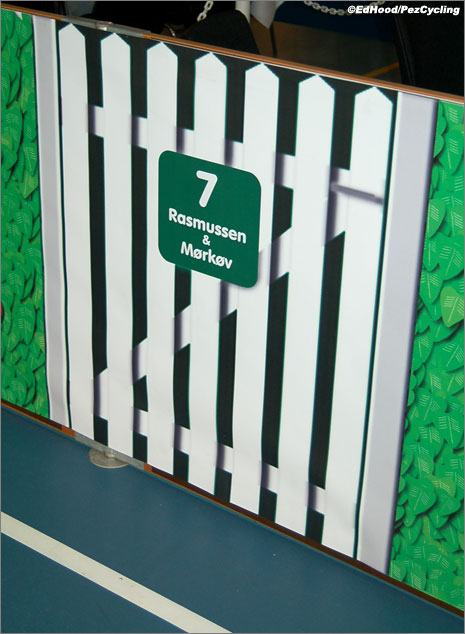 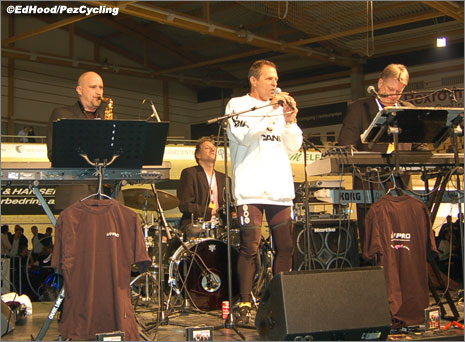 Danny (see below: gets down on it.)

I met Danny Clark on the way over from the hotel, he was out for his morning run. He rides the boards every day, too – he’s in good shape and still winning road races in Australia. 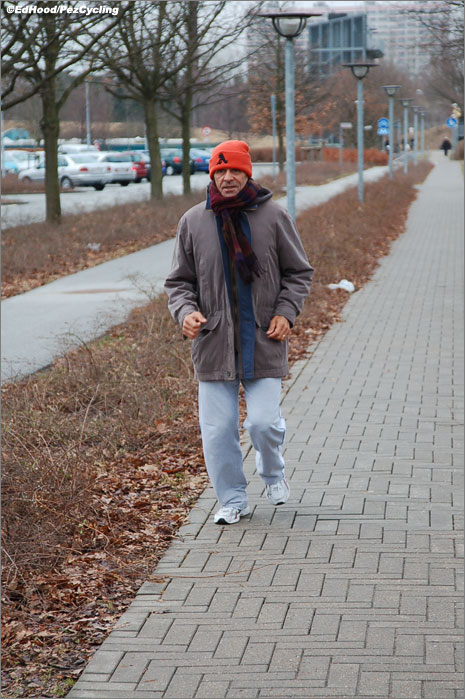 There were a lot of kids in today, the organisers provided a bouncy castle and clowns – it gives guys like me something to take photos of, I suppose. 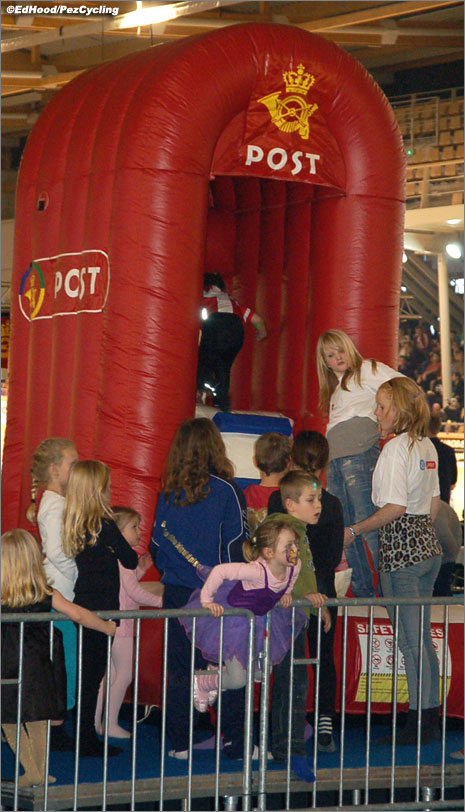 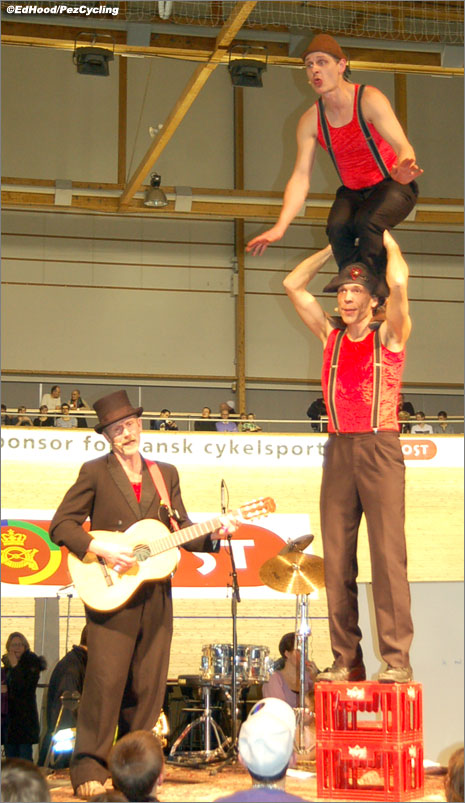 Franco was back on the boards today – we missed him.

Sunday afternoon was the best house the race has seen so far and the chase was good. The supporting races have been cool all week – especially the flying lap, which Tristan Marquet has made his own, but the chases haven’t been riveting. 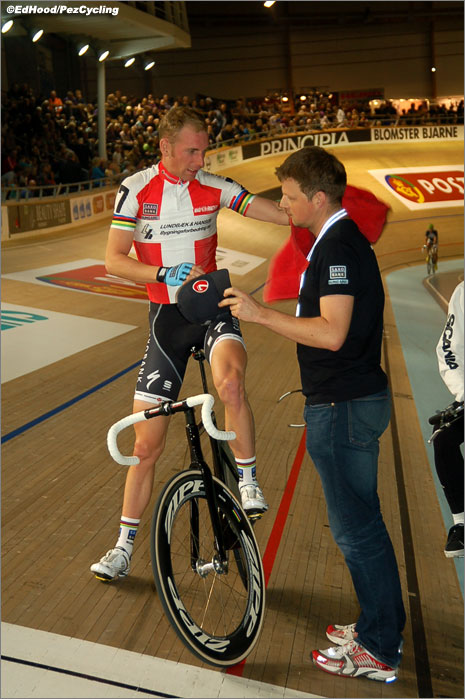 Drama of the day came after Alex and Michael had picked up the flowers – again. 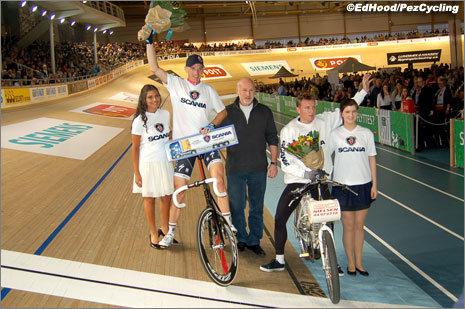 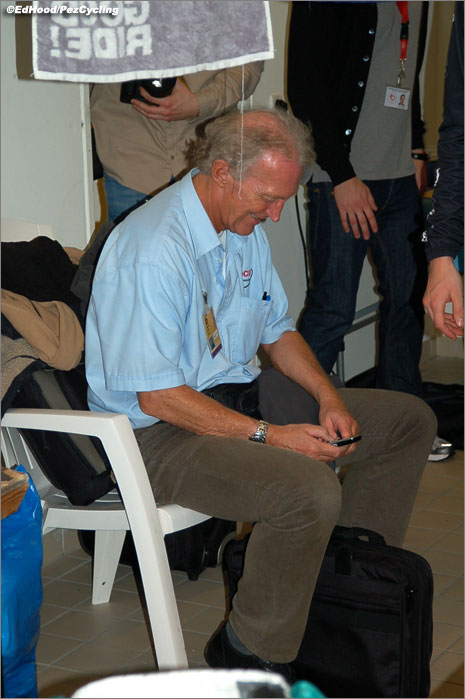 We had Michael as part of the leading team plus Colby and Jesper. 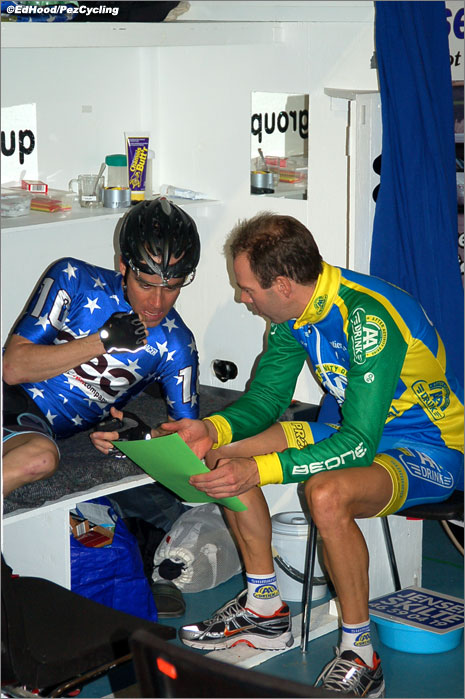 Colby gets a visit from Danny.

If you’ve just finished a madison and the sweat has been dripping out of you, the last thing your body wants to do is to surrender more fluids.

What should have been an early night turned into a nitemare as Colby and Jesper’s plumbing refused to play ball. 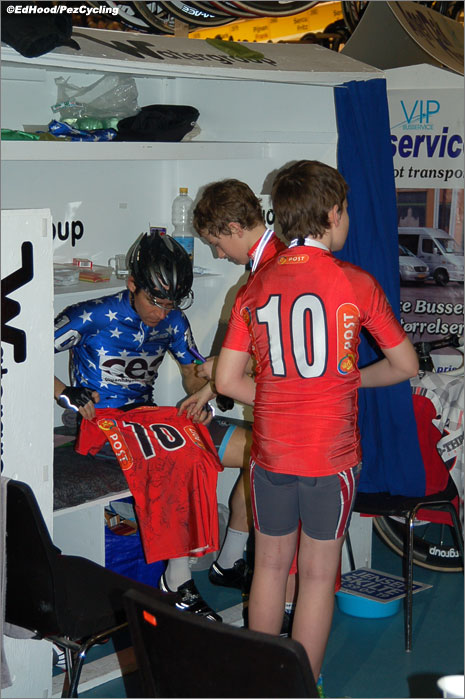 Colby does the autograph thing.

We got to the restaurant around two hours late – the pizza was good, though.

And there’s just one more washing to do.

All Roads Lead To Copenhagen: The Grand Finale