An Inside Look At The Bremen Six

All the greats have won in Bremen, Post, Sercu, Clark, Risi – and it was here that the late Garry Wiggins took his only six day win, with Tony Doyle in 1985. Our man beside the 166 metres of steeply banked boards, where the organisers say; ‘it’s more than a race!’ was the soigneur who has now topped 300 six days – Kris.

The circus rolled on to Bremen, Germany after Rotterdam – to the home of Becks Brewery and a six day, which dates back to 1910, albeit there was a gap from 1910 to 1965; we make ‘record man’ Holland’s Rene Pijnen with seven wins between ’74 and ’83.

PEZ: How were the crowds, Kris?
Kris: I was worried when I looked up to the stands on the first night, there weren’t a lot of people; but it was expensive to get in, 30 Euros and beers are four Euros a pop. 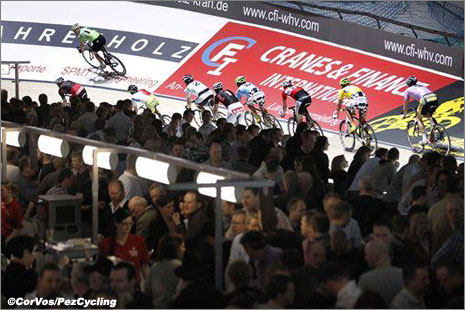 Friday and Saturday were good though, and after the Sunday afternoon session the stewards had to usher the crowd out – many fans were drunk and having a great time.

However, the last night was quiet.

I have to say that it’s not like it used to be.

PEZ: What makes Bremen, Bremen?
Kris: It’s the ‘party six,’ not as much so as it used to be; but there are still discos, live bands, every kind of restaurant, and a whole pig roast – there’s even a hall for smokers. 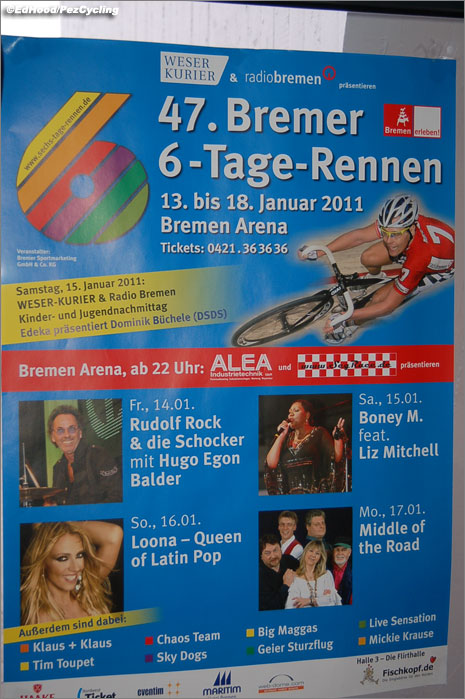 Latterly, when Zabel used to ride, it was good too – but not like in the 70’s, there were so many people here that you couldn’t walk down the passages.

PEZ: Are the organisers trying to keep abreast of the times?
Kris: They’re live streaming the race on the internet, I’ve heard it’s not the best quality but at least it’s a step in the right direction.

The local radio stations have been doing a lot of interviews and the Bremen TV channel has been covering the race – so that’s all good.

The current race organiser has retired and we’ve heard that the company which organises the Berlin six is bidding to organise here – and it’s likely that Erik Zabel will be race director. 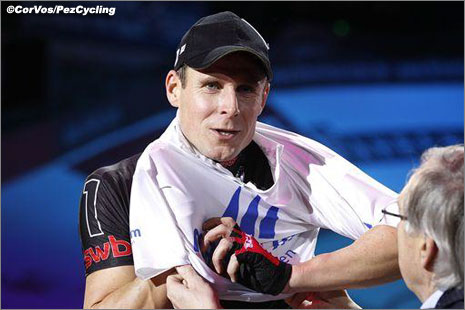 PEZ: What’s the race format?
Kris: What’s unusual for a German six is that there are no Dernys – usually they’re a big part of six day racing here.

But to save on costs they decided not to have them, this year.

The racing was good but was weighted towards time trials, there’s a one lap, 500 metre and 1,000 metre race every night – and here’s the thing; if a team wins all three then they get a bonus lap plus 50 bonus points.

That means you could be losing laps in the chases but leading because you’re winning the time trials – don’t forget that there’s a bonus lap every time you score 100 points, so the 50 points bonus puts you half way to another lap gain!

That’s the main reason for Bartko and Bengsch winning, they dominated the time trials.

There was no amateur six or sprinters racing here – all in the interests of keeping costs down. 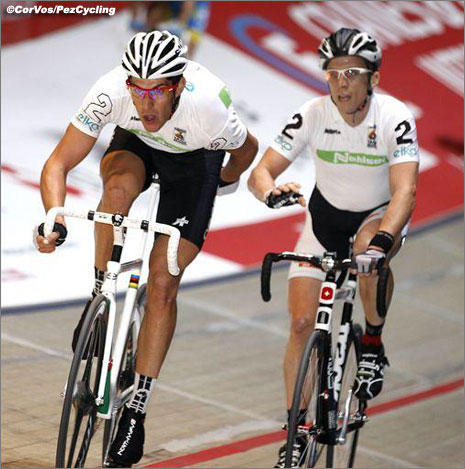 Franco was back to his normal self in Bremen – fast and fun.

PEZ: And no Iljo, either?
Kris: That’s right, taking the case to court in Amsterdam so as he could ride the Rotterdam six was one thing – there’s no language barriers there – but to do the same here would have cost a lot in terms of time and translation fees.

He’s not on the start list for Copenhagen and I’m not sure what’s happening at Berlin.

PEZ: It was a home win, then – but how about Franco?
Kris: Marvulli/Aeschbach were second; Franco is back to health and his morale is good – he’s his usual self, smiling for the fans and the media

Jens Erik Madsen, my other rider here was third with Marc Hester – that was good to see. (the same pair of Danes took third in Grenoble, too) 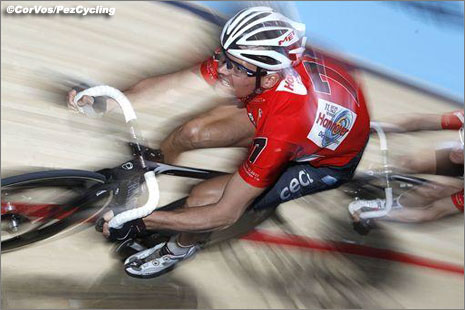 PEZ: It’s a small track there, isn’t it?
Kris: It is small, the same size as Gent at 166 metres and fast; but it’s not a permanent track – the straights are stored away as sections but the bankings are made up of individual boards.

We had a bit of drama, early in the race when one of the boards broke, they laid it with the join too far from the supporting trusses – they soon repaired it though. 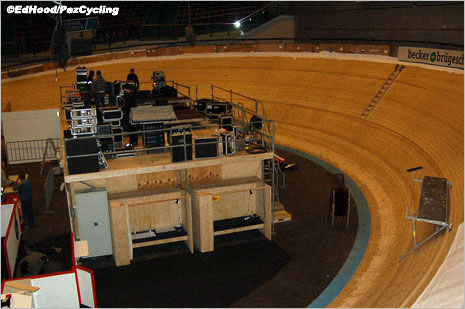 The problem with it not being permanent is that if the carpenters aren’t exact with their fitting of the timbers then you get ridges which can mean the tyres ‘tramline,’ following the line of the badly laid board.

What’s dangerous is that the cabins are very close to the track, there’s little room if someone comes off the bottom of the track.

PEZ: And was the dust landing on your head when the bands played on the stage above the cabins?
Kris: It’s terrible! And remember it’s not just when they play, they have to rehearse, too – there was dust over everything.

PEZ: And you have a break now until Berlin, next week?
Kris: Yes, Stuttgart used to come next but it’s gone. On a positive note we’re hearing that there will be a six in Dusseldorf in April and Hanover will be coming back in December.

And the rumours about London seem to be getting stronger.

PEZ: Can we have a Peter Post at Bremen story, please?
Kris: When he was race director here, the soigneurs and mechanics used to get free beer, you just had to return the empty bottle.

But one of the soigneurs flicked the system and had snaffled crates of Becks.

One day, Post was in the Raleigh car and he drove past that soigneur, who was parked up at a feeding station – drinking Post’s beer from Bremen.

The Raleigh car stopped and reversed back; ‘you’ll never work in another six day in Holland as long as I’m there,’ Post told the soigneur.

Peter was a man of his word!