Welcome to the Cancer Council Classic – the official start of the UCI World Tour for 2011. Here at the Santos Tour Down Under the racing action has been HOT, HOT, HOT! Read on to find out who drew first blood on the streets of Adelaide…

The pro teams are in town and the reports of their riding have been filtering through… like the Lance Armstrong twitter ride yesterday morning. I had a rest day after a two week training block to burn off the Christmas pudding, so I did not attend but it gathered a few thousand in lycra. Stuart O’Grady, Alan Davis and Robbie McEwen also attended with a focus on raising money for the people affected by the flooding in the eastern states of Australia. 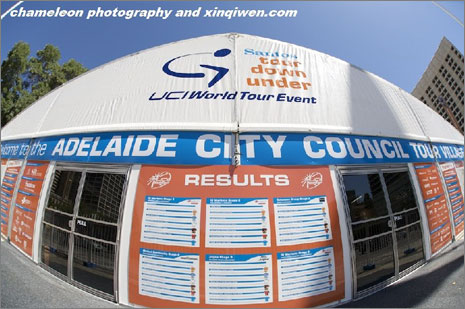 The best pro team story I gathered is from the photographer I ride and work with for PEZ… Kevin Anderson and his wife rode into town to the TDU village as HTC came out for their morning ride…both of them joined HTC for a ride for a few kilometres. The atmosphere around the TDU village and the open feeling from the pro teams makes it a real fans’ race.

The closest I have come to a full pro team was this afternoon before the race, my brother and I visited the TDU village and we were nearly run over by Rabobank heading to the Cancer Council Classic…I was too slow with my camera to catch them, then as I put my camera away Robbie McEwen crossed the road we wished him well for the classic tonight and he passed on a ‘Thanks guys”…Robbie’s cool.

We walked to the circuit for the Cancer Council Classic 30 laps for the 51km criterium starting at 6:45pm, before sunset. The evening was warm sunshine, 25 degrees Celsius with a cool breeze, great weather for a race. This is how close the fans are to the racing and the pro’s – Allan Davis having a chat with his family at a restaurant before the warm up. 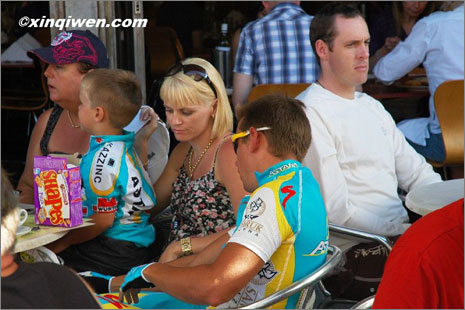 I scoped the pits & the new bikes, and the mechanics seem to have it all under control. After watching the start we walked the inside of the circuit. 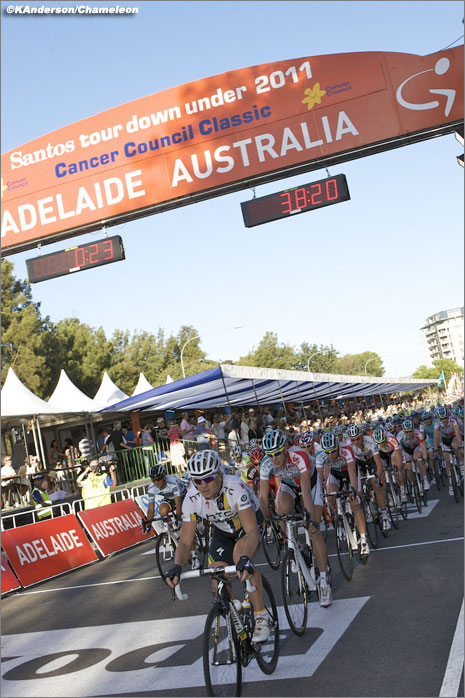 A festival atmosphere, families and friends, children playing on grass in the warm weather. Stunning evening for bike race. 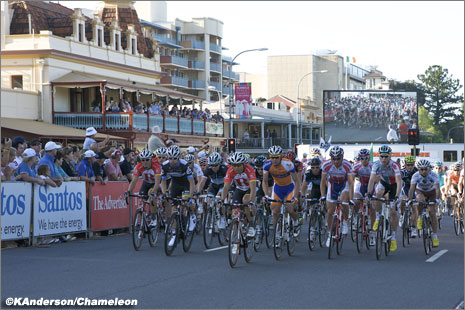 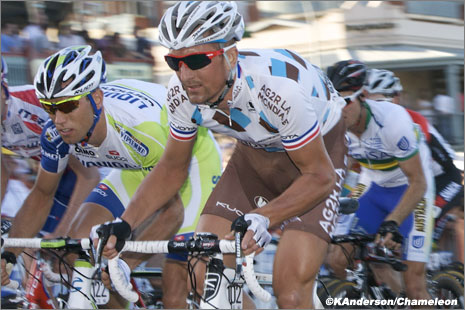 A group of four got away in the first lap UniSA, Radioshack, Euskatle-Euskadi, and Leopard-Trek had guys in the break. 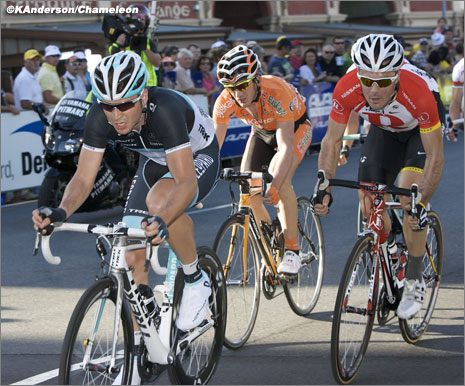 My brother started chatting with some friends who traveled from Melbourne and I discovered a group from Port Adelaide Cycling Club supporting Angel Mardroso from Movistar …their reason he’s a neo pro who should be supported for making it to a pro team, not Australian but Spainish, no. 164. Yep, they all deserve supporting for making it pro.

SCREECH BANG a crash in front of us…oooh that is going to hurt. We all cheered and clapped to encourage John Murphy from BMC to gingerly climb back on the bike. Tough and gutsy. 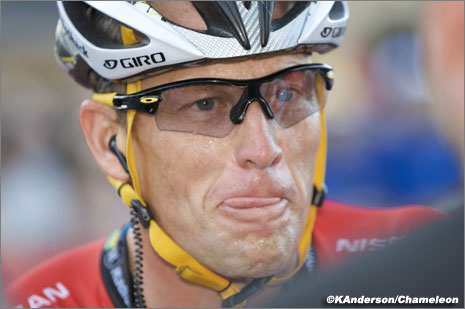 The race was drawing to a close and the break away had been caught after taking all the intermediate sprints, I had become distracted by the socializing….. 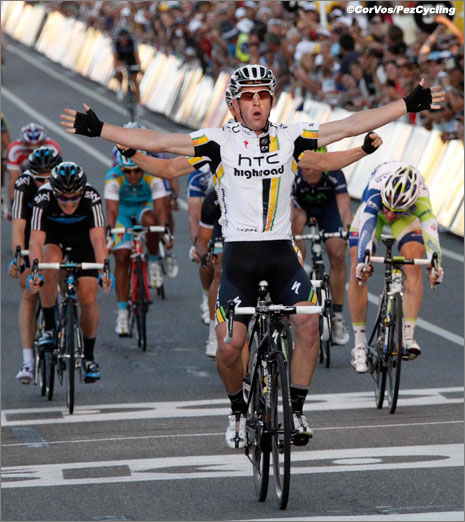 The SKY train was working hard at the front, Omega Pharma and HTC moved to the front… a crash in the last corner… HTC take a one, two finish, Matt Goss followed by Mark Renshaw and to top it off….Robbie McEwen comes in third for Radioshack. All Aussie top three! 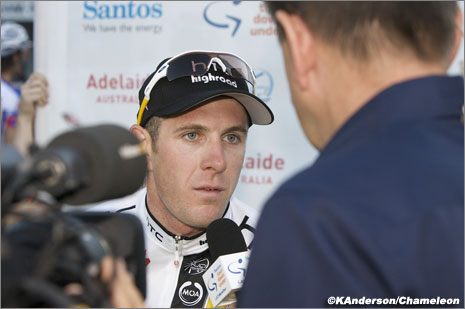 The prize money from the Cancer Council Classic was being donated by the riders to the flood relief appeal, also each team donating a jersey, signed by the team for auctioning on eBay. Get in and check it out make a bid to help out someone who may have lost everything in the floods.

I followed up in the pit area to see how John Murphy was looking… sore. 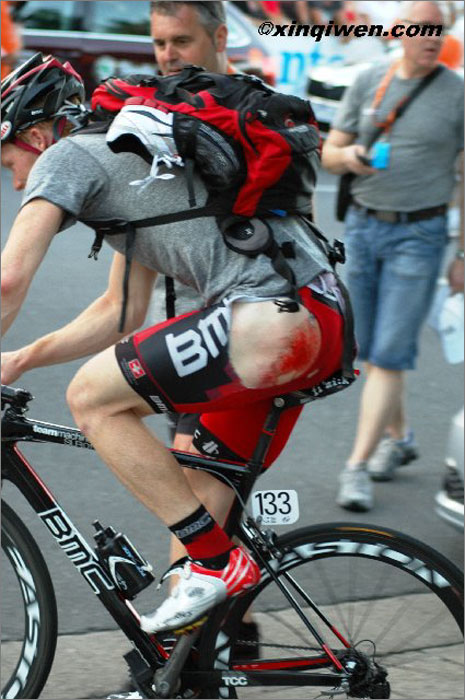 This is how serious the TDU is these days: Bjarne Riis and Johan Bruyneel chatting about the race. 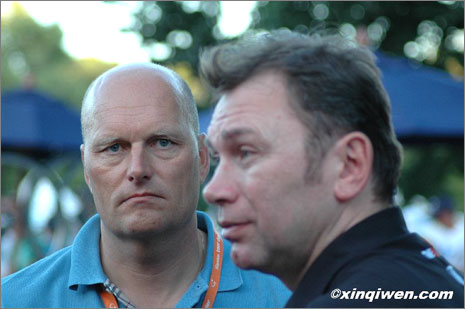 Tuesday is the first stage of the TDU, 138km from the northern Adelaide suburb of Mawson in the Northern Adelaide Hills, Barossa Valley, finishing in Angaston. Another stage for the sprinters, but look for the UniSA breakaway, maybe even Jack Bobridge from Garmin Cervelo going for a solo finish after the stage travels through his home town of Gawler.

The Burke’s Best Bet Beer Of The Day
I had tired legs with a 90km ride in the hills this morning and the walk around the circuit so I needed a beer.

I am going with something simple, Hahn Super Dry. It is my most favoured beer, plenty of richness and not sweet. Low in carbs it lets you have another without feeling it. I drink this on hot days and enjoy it with simple dry biscuits and pate’.