It’s not the first time that Bjarne Riis has worked his magic on a lost soul and a wasted talent. It’s a surprise winner at the most beautiful one-day race of the season. The 2011 Ronde van Vlaanderen turns out to be another extraordinary event as it mutates from thrilling, fascinating escape to foregone conclusion to nerve-shredding finale.

No point in spoiling the suspense. I think a stream-of-consciousness meander through the twists and turns of this incredible Tour of Flanders is the best way to try and bring you the sense of exhilaration of how it went down in Flanders’ Fields this afternoon. 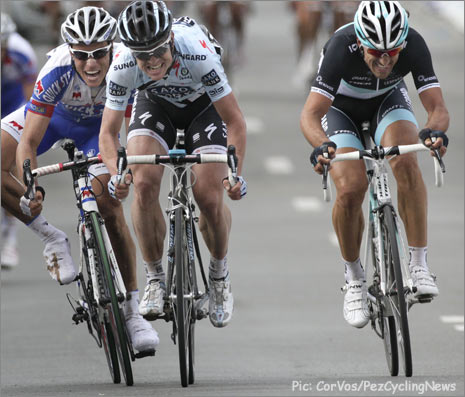 Nick Nuyens showed his class with a brilliant ride.

The first hour is run at kamikaze pace. The only option available is to redline it at 50kms/h and no break sees daylight until five men go clear as the first climb of the day – the Tiegemberg – looms as we enter the second hour of racing.

In any Classic, the onus is on the home teams to get a rider in the main break – the Belgians royally messed that up; and only the ‘big’ teams to get a man in there, which Sky and Garmin-Cervelo managed perfectly with Jeremy Hunt and Roger Hammond. You’d be hard pushed to find two sharper, more reliable tacticians than that pair up the road with their leaders sitting comfy behind. Along with them are Mitch Docker from Skil-Shimano, Europcar’s Sebastian Turgot and Stefan van Dijck of Veranda’s Willems.

Over the Nokereberg with 80 clicks under the wheels and the gap is stretching out nicely. Now six minutes, then eight.

Heading towards half-distance and Radioshack are trying to force the pace. There’s a lull and Rabobank send Martin Tjallingi off the front, with a dangerous looking group. Former Gent-Wevelgem winner Bernie Eisel is there for HTC-High Road with Edvald Boasson Hagen (Team Sky) and suddenly they’re clear. It’s about 16 guys and no sign of any Leopards for Cancellara. This could be interesting.

The front quintet (not a freeform jazz band, although who knows?) are still six minutes to the good as they go over climb number three – the Rekelberg. Leopard-Trek are chasing now and the main field is starting to shapeshift: it’s an arrowpoint at the front and the lead is falling.

Four minutes to the chasers and four-and-a-half to the main field. Pippo Pozzato is up there just behind the “Leps” – he’s not been in form, he’s been facing a lot of criticism from his team and he needs a result. So let’s hope he doesn’t just sit on Philippe Gilbert’s wheel as usual.

Cancellara’s “Leopards” do their job and the dicey-looking break is pulled back. Over the Kaperij and the five leaders have just over two minutes to the peloton. It dips closer to that barrier as the Kruisberg disappears under the wheels.

On the Taaienberg and it’s now Sylvain Chavanel (QuickStep) and Astana’s Aussie Simon Clarke who have still a handful of seconds – behind them, Boonen and Flecha slip clear as the field looks at Cancellara to chase. It comes back together and all the heads are in there – Hushovd, Cancellara, Boasson Hagen, Gilbert.

Lars Boom is active on the Eikenberg as Chavanel and Clarke push on. Boasson Hagen has got over to them and Rabo-boy Lars Boom ain’t for missing the party so he hits out. 62kms left and Sky can’t be accused of sitting on their backsides in this race.

55 clicks left and Frederic Guesdon jumps out of the peloton but he’s got Matt Hayman (Sky) and Tom Leezer (Rabobank) as policemen for their buddies out front.

Now the Molenberg, the sun is out, the flags are waving and the break is looking dangerous. Chavanel slams the accelerator pedal, Boasson Hagen follows.

Thomas drags the peloton up the lower slopes. Flecha, Cancellara and Boonen take over and look at each other as Hushovd struggles. Leukemans is there too. 48 kms left and the gap is now 31 seconds to the front.

Bjorn Leukemans (Vacansoleil) and a SaxoBank-Sungard rider nip clear. Chavanel goes solo with Boom and Boasson Hagen in the distance behind.

44kms from home and Gilbert has a mechanical. The change is not the quickest but he should get back OK.

Chavanel is alone on the Haeghook cobbles now and he’s flying. Gilbert’s making his way up through the cars. Hushovd hits the front now and stretches them out.

Now Boonen! Cancellara is on him, grimacing wildly to get on. 43kms left and Pozzato is there, too. Hear that? Alarm bells! That trio is up to Leukemans and co., and the field is gapped.

The Leberg and now Cancellara launches. Boonen is dangling just behind, fighting to stay in touch. The Fabster goes past Boasson Hagen and Boom and …. is … gone! 40 kms left and it’s Chavanel with 28 seconds to Cancellara.

Chavanel drapes his hands over the bars and grimaces, grinding on.

The Swiss machine corners so fast that the foto motos barely stay out of the way. In the chase, Boonen is looking for help and for not pulling the finger is being pointed, it seems, at Pozzato.

The Valkenberg now and Chavanel is out of the saddle, looking mournfully over his shoulder. The storm is coming. Chavanel puffs out his cheeks. Can he stay on Cancellara’s wheel when the catch is made?

32kms left – the gap to the chase is 37 seconds. The pursuit is coming back together. Gilbert tows about 40 riders back together, so they need to get themselves organised fast.

31kms to race – 40 seconds. Has Cancellara gone too early?

Flecha (Sky) stretches the chase out and Europcar’s little Tommy Voeckler goes with him, but it needs to be a concerted chase and not a punch, counter-punch slugfest behind. Geraint Thomas (Sky) is dragging the field with no fewer than six BMC riders appearing behind him to take over. 28kms and it’s a minute now. Race over?

Cancellara hits the short, steep Tenbosse as Chavanel just sits in. Over the top, the Fabster gets his food and drink from the car as Chavanel grabs a bottle from a helper.

The message from the Garmin-Cervelo car is LOUD AND CLEAR: “No more riding!” Vaughters puts his cards very firmly on the table as he looks for a sprint finish. Wilfried Peeters is almost equally apologetic telling the Leopard Treks that Cancellara is too strong – hence Chavanel won’t be/cant be helping the Swiss master. 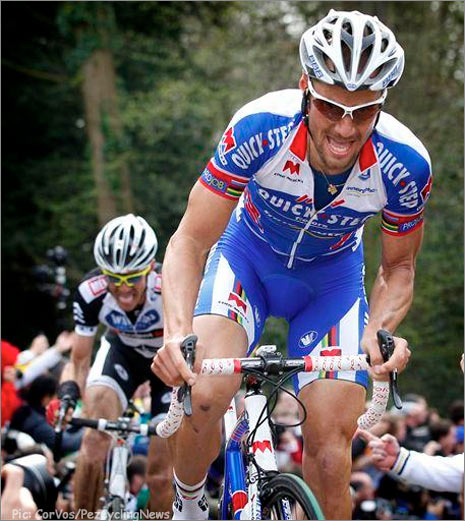 Boonen looked strong all day, but never quite strong enough.

BMC and co are making little impression. 20kms to go – 56 seconds is the gap.

The Muur van Geraardsbergen is one of the world’s great climbs and Cancellara hits it full bore. Suddenly the gap is falling! Now 40 seconds, no just 30, 27, 20 seconds! Chavanel is sitting in. Rabobank charge up. Here comes the group! Cancellara looks cooked all of a sudden. Incredible!

Ten seconds. The Kapel-Muur and Gilbert makes the junction!

Cancellara goes again over the top. Chavanel hangs on. Gilbert is there. Cancellara sits up! Five together now. Gilbert, Leukemans, Chavanel, Cancellara, Ballan.

Just the Bosberg to go now. Five clear with seven chasing. Geraint Thomas, again, does another monumental turn and pulls it back together. Gilbert attacks! The Belgian is gritting his teeth, Cancellara has a chain slip and is dropped! 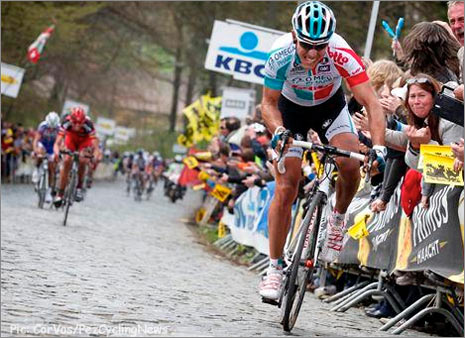 Always a threat – Gilbert laid his cards on the Bosberg.

Ten kms left, ten seconds for Gilbert, but the chasers close him down, and the second chase bunch whip round a camera bike and it’s all together.

12 men together – seven kilometres to go. Ballan jumps and Gilbert does the chasing.

Now Nuyens jabs, Chavanel parries, Thomas reacts. Four kilometres to go, and Sebastian Langeveld (Rabobank) is contrary enough to go right on the roundabout when everyone else goes left. Now Cancellara launches and Chavanel and Nuyens are up to him. There’s a gap! 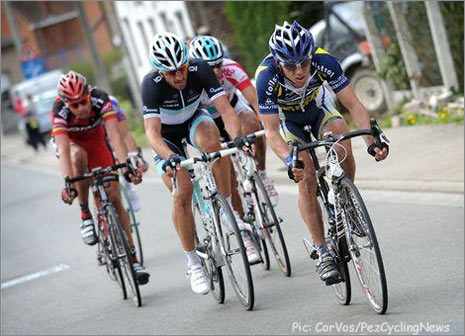 Chavanel and Cancellara give each other a handshake after their time out front together. May the best man win. Boonen and Flecha are trying to bridge up.

Last kilometre! The front trio are looking at each other, round the last right-hander into the finishing straight.

Cancellara leads out, Boonen is coming! Nuyens swings right across the road, Cancellara follows and Chavanel tries to get through on the barriers but can’t make it.

Nuyens wins the Ronde van Vlaanderen! What odds would you have got on that when Riis announced his signing? 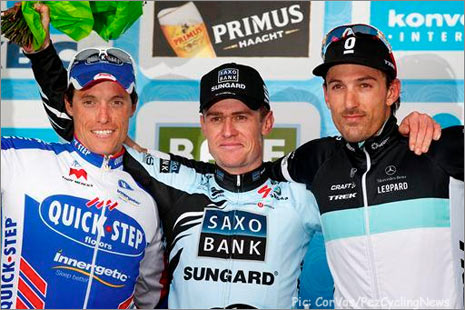 It’s a massive win – the biggest possible – for Nuyens, and the Belgians have a home winner. Congratulations to him on his resurrection.

Just goes to show … Cancellara is beatable after all, Thomas has the firepower to go a long way, and Ol’ George Hincapie in sixth isn’t finished yet!

Jered is roadside, so stay tuned for his inimitable take on things!