After two weeks of early wake ups and diapers, my wife Natalia gives me the green light: “Ok then, watch your race but come back early”. Even if the “come back early” part could have very different interpretations I catch the opportunity and I leave so early in the morning from my home that she has no chance to fix a return hour time. At the end, as Pez in person wrote me on Friday night, that’s for sure what baby Mario would want me to do. Here’s how the day went…

I’ve chased several editions of the Lombardia starting in the late ’90’s but I can’t say I’m expert enough to meet several passages as I do for Sanremo. The reason is very simple: changing the route every 5-6 years my research work is spoiled out in a while.

The plan is to watch at least 3 important passages of the race. There are 3 big climbs and 2 hills, but one of them (Villa Vergano) is located at 10km to the finish. So, I would like to watch the race on Valcava – the first big climb after 70 km of racing – on the Sormano, the second big climb – and on Villa Vergano, and sacrificing the Ghisallo where I’ve never been in 15 years of Lombardia chasing!

Jered and Ashley are in contact with me and we should meet at departure village to keep the car pass, however they inform me they had some trouble in the Milano traffic so we will meet in the hinterland where I parked the car.

The morning is freezing but the sun shines, it will be a good fall day in Lombardia. All the riders are sitting in the motor homes and I have no chance to meet one of them. Better leave in time than not lose a passage.

First time I met Ashley and Jered was at Sanremo in March (this year). They’ve covered almost all the Classics for Pez and they’re going to be back home in few weeks. We covered the first one and now we cover the last. As usual I’m in a hurry and quite nervous at the beginning of a new chase. Is luck on my side once again? Plans B, C and D are there but I love so much plan A… 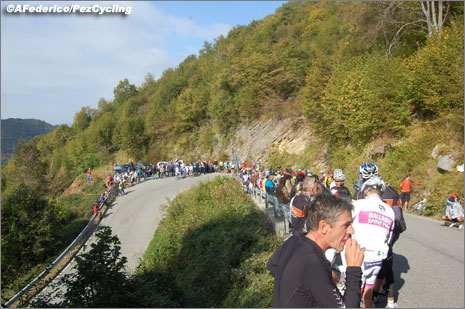 Our first stop: a switchback high on the Valcava.

The roads north of Milan are the worst in traffic you can find in Italy. I’m also not so prepared in locations but Jered helps me with a mobile-GPS which will solve all our doubts during the day. Behind Ashley is half talking / half sleeping: same she was doing at Milan-Sanremo last March.

When Jered asks me about the favourites I’m quite embarrassed to talk about that to the guy who’s daily following news for PezCycling. I just point the finger to the fact that there are 3 hard climbs in a one day classic race: it’s hard to make a prediction. The hardest is for sure the first one: Valcava. A narrow road, steep and high. It’s a climb for a Grand Tour.

We arrive there well in time and I’m quite worried to drive on such small nasty road full of cyclists and babies. At half climb, after a bend, when you expect a switchback, an 18% narrow road shows the worst face of this mountain.

This section is very famous by local fans and cyclists: seems the engineers have wrongly calculated the road design when they built the passage to the top. The purpose of this road is to reach the big TV antennas on the top and it seems that the original design was really locating a switchback in that point: later studies clarified there was no chance to build it due to the rock formations. What to do? Just shortcut it with an 18% climb! (Nobody thinks about cyclists during mountain roads design).

Despite the Valcava is located at 70 km to the finish (why not later?) there’s full of people and many of them are there with the bike. Not bad for a late season event. 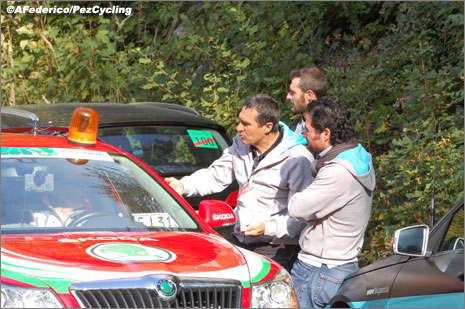 I park with the help of Jered and few minutes later comes the team car of Leopard. Baffi, (Italian sprinter in the ’80) is there as team manager. “Yes, today we work for Fuglsang, but we will have at least 3 riders in the first group.” – I check the departure list to check out the other two but I can’t read such big names. He understands I’m not convinced – “We have Zaugg in good form… we will be in three over there”. Never mind, he didn’t convince me, but it’s not so important and he goes back to his work with the radio. 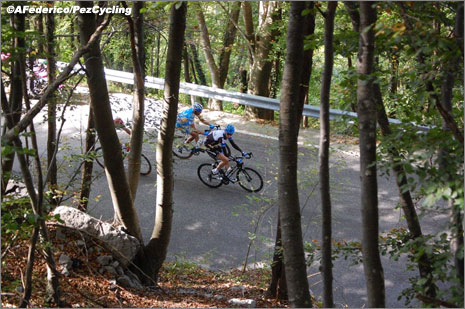 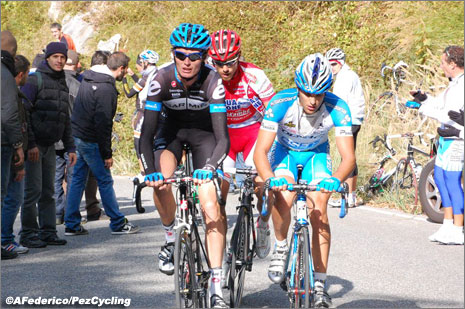 The race comes and six leaders proceed on the hard climb. They are split in two small groups of three divided by few meters. The bunch comes after three minutes and is led by Liquigas. All together with a few riders losing wheels behind. I was expecting something more but Jered is sure: ”They were riding quite fast” – he has got a good eye being a cyclist. 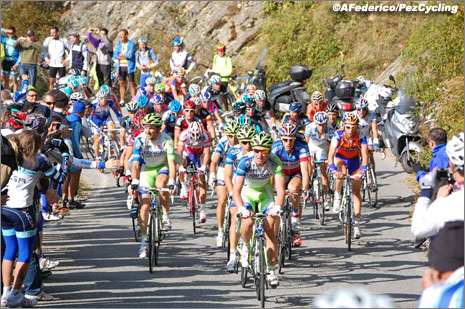 The way back from Valcava seems easier than the way to. We are in time for the second passage on Sormano and we decide to stop at the base of the climb, well before the town of Sormano. There are wide fields and the sun is shining warm now. 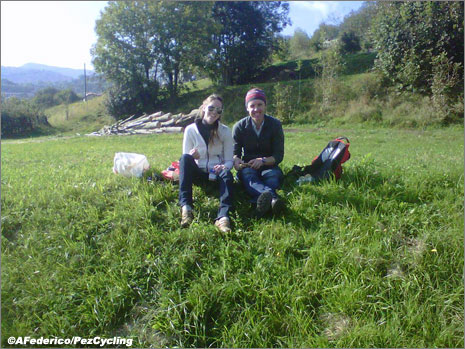 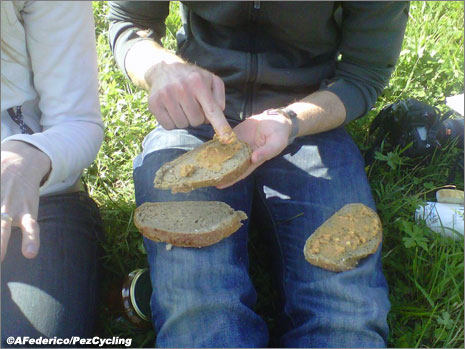 Jered and Ashley stop for a lunch even if they forgot the knife to smear the marmalade – they assured it was marmalade but I didn’t try even if without a snack. The place is a perfect spot and – always – when I have too many chances, I miss them. The guys of the breakaway have lost a piece, they are five. But the bunch comes very fast (and this time I also realize it) led by BMC. 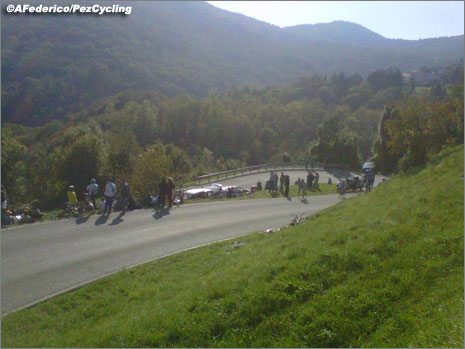 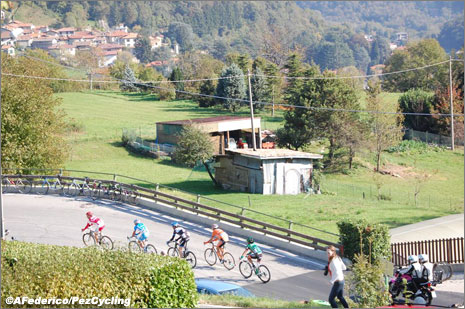 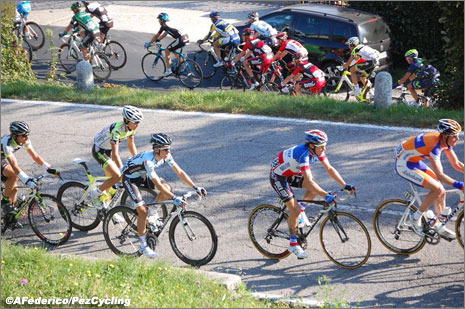 “Who are they working for?” – Jered asks. “Maybe Van Avermaet” – I reply. Later, journalists speculation of the work done by BMC for future leader Gilbert clarify more the issue.

After the race the same script: find the way down and head to the next climb: Villa Vergano. Jered and Ashley where alerting me “Very narrow” – “Very steep”, and when I was over there driving the car on such miserable roads I had a moment of panic. There was a big crowd there and, especially in the double switchback on the top, pass through babies, dogs and bikes was something scary. 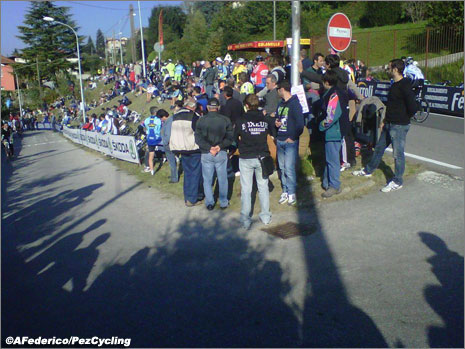 The final turn before the top of Villa Vergano.

We parked on the top and I decided to stay there, waiting for the first over there. Ashley and Jered were going down below to the hardest section of the climb to enjoy the bad faces. Chasing races in the years of the social networks is much easier and interesting. On the top of Villa Vergano everybody was looking to the mobile phone catching news from Twitter or Facebook. “Nibali attacked on Ghisallo” – “Forty seconds gap” – “One minute”.

The people were already waiting him when the bad news came – “Just fifteen seconds more”. 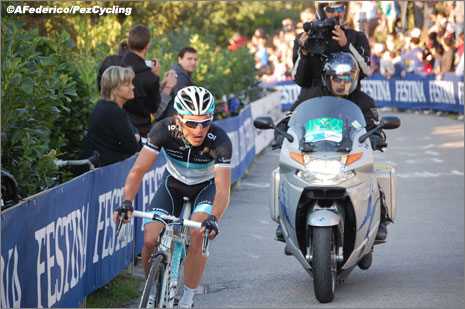 Oliver Zaugg was the first to arrive.

It’s funny to watch how a 200 rider race becomes at the end an almost 50 rider race. The most acclaimed riders on the top were: Zaugg of course, being the first one. Gilbert was in trouble but was cheered the same as a big Italian rider. Despite he was one of the slowest and latest the most acclaimed was Nibali. He realized the big attack of the day and he was entertaining us for several minutes of waiting. 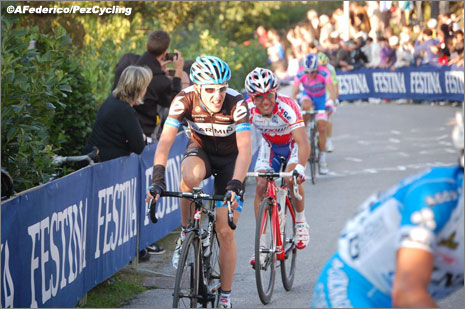 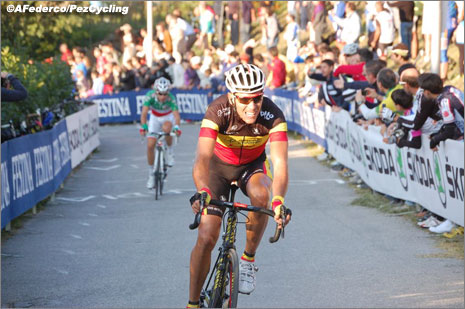 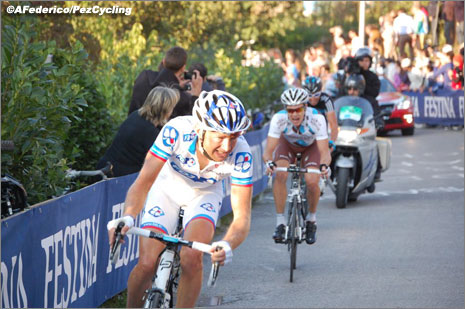 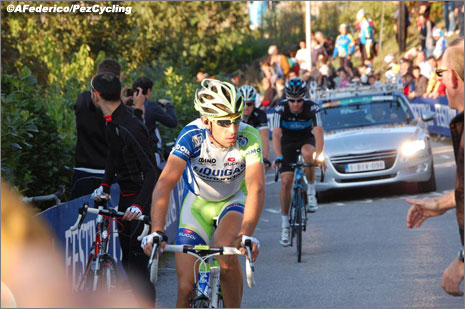 The way back home from a race is always sad but from Lombardia is particularly sad. It’s the last one and you know there’s a long wait before the next Sanremo. So long that you don’t want count the days. We reach Milano in the sunset and the park is surrounded by an unexpected market of Rumanian people. This is one of the “Sunday markets” famous in Italy full of products from east Europe. It would be nice to get a closer look but suddenly I remember Natalia’s words: ”Come back early”. 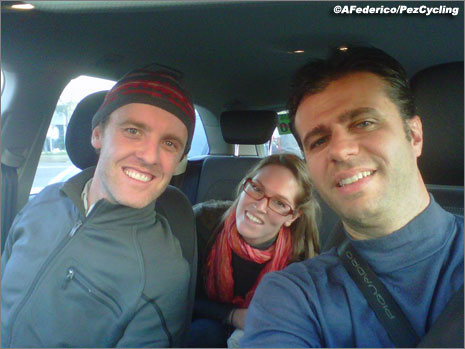 A parting shot…until next year, of course!

But it was so fun and so great that I’ve counted the days to next Sanremo: 154.

Toolbox: Getting To The Good Stuff