Race Report: The Giro di Lombardia had a few surprises with its new course, and one big surprise from the Swiss Leopard-Trek rider; Oliver Zaugg, who sunk his claws into the new final climb to the Villa Vergano and tore the race apart for his biggest (and 1st) Pro win. What a course, what a race and what a winner!

“The Race of the Falling Leaves” the last Classic of the season, well until next year when the date changes to the much earlier 29th of September, but it will always be a race the riders want to win and the fans will want to watch. The run-in to the finish in Lecco is tough, from the climb of the Valcava the course is murderous; Colma di Sormano, Madonna del Ghisallo and to finish; the climb through the Villa Vergano, with its near 15% ramps 10 kilometres from the line. 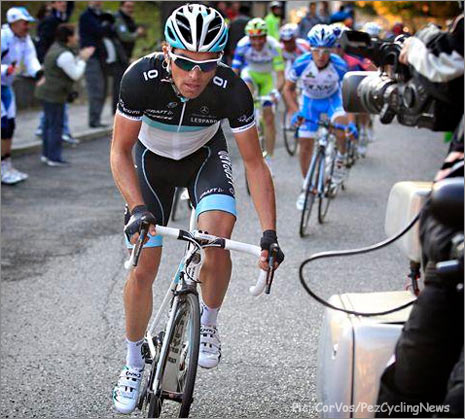 The expected race winning move came as predicted on the slopes to Villa Vergano, but from the unexpected winner Oliver Zaugg of Leopard-Trek.

The first bit of news was that World Champ; Mark Cavendish would not be on the start line in Milano, but then today is not really the course for the fast man from the Isle of Man. The weather in Northern Italy was sunny and hot, unlike some previous years.

By the Colle Brianza, after 122 kilometres, a group of six riders; Johan Vansummeren (Garmin-Cervelo), Mikel Astarloza (Euskaltel-Euskaltel), Yukiya Arashiro (Europcar), Omar Bertazzo (Androni Giocatolli), Claudio Corioni (Acqua & Sapone) and Andrea Pasqualoni (Colnago-CSF), had a six minute advantage over the Liquigas-Cannondale led peloton. The word is that five of the six HTC-Highroad riders that started have retired, Siutsou being the only one left. 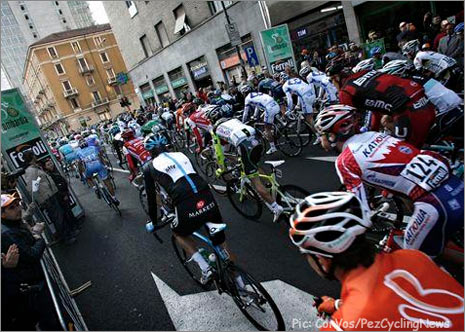 By the feed zone, with just about 100 kilometres to the finish, the six up-front had 5:10 with Liquigas still at the helm for Nibali or Basso? In the lead group Vansummeren and Arashiro looked to be the strongest workers.

The Liquigas train was eating into the lead as the gap came down to 3:50 with 95K to go, then within 5 kilometres the lead was down to 2:39 with 90 kilometres to go.

On the climb of the Colma di Sormano; BMC’s Ballan took over the work for the bunch, while up front; Vansummeren was trying to keep the breakaway going, this caused Omar Bertazzo (Androni Giocatolli) to be dropped and soon caught by the peloton. At the summit Astarloza and Vansummeren came over first with Arashiro hanging on after crossing to them from the other two dropped riders of the lead group, the bunch were 1:10 behind, now being led by Leopard-Trek. 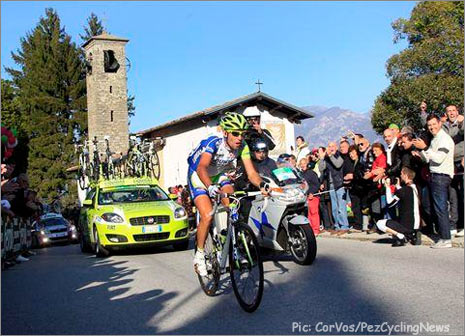 Vincenzo Nibali threw Liquigas-Cannondale’s first punches on the slopes of the Ghisallo.

Vuelta a Espaсa winner; Juan Josй Cobo (Geox-TMC) retired before the bottom of the descent from the Sormano, he looked OK on the climb, but obviously he had had enough.

Katusha and Movistar took the bunch down the twisty drop from the Sormano, with BMC staying close to the action. With 70K to go the three escapees were caught by seven riders, including Philippe Gilbert (Omega Pharma-Lotto), Pablo Lastras (Movistar), Luca Paolini (Katusha), Nibali (Liquigas), Santambrogio (BMC) and Jakob Fuglsang (Leopard-Trek), they were joined by others to give a group of around 30 riders ahead with more joining all the time. 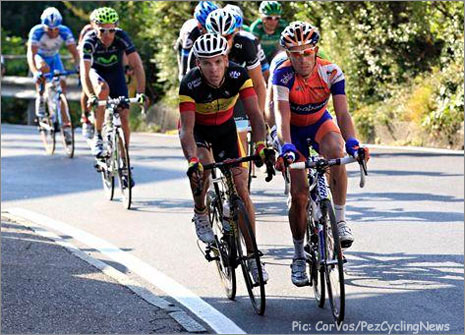 Philippe Gilbert was in the hunt, but wasn’t quite up to his usual form.

Gilbert and Fuglsang kept the pressure on, on the road to the base of the Madonna del Ghisallo, the two strongmen leaving the others, Nibali didn’t approve and brought them all together for the climb, the bunch was 30 seconds back with 55 kilometres left.

Vincenzo Nibali tried an attack as the climb started, Gilbert, Fuglsang, Santambrogio, Paolini and Le Mevel closed him down. Nibali didn’t like this and headed off on his own again, chased by Gilbert and Fuglsang, the others struggled behind.

Domenico Pozzovivo (Colnago) pulled Christophe Le Mevel (Garmin) and Giovanni Visconti (Farnese Vini) up to Gilbert and Fuglsang, but the bunch had not given up and had started to close at 54 seconds to Nibali and the chasers between at 42 seconds.

Nibali pushed on and at the top of the Ghisallo at the Chapel, he had 1:19 on the bunch, which had caught the chasers, with 45.6 kilometres to go this was looking like a tough order for the 2010 Vuelta winner.

Vincenzo Nibali made himself as aerodynamic as possible to take as much time on the drop off the Madonna del Ghisallo, with 40 kilometres to go he had 1:36 on the bunch led by Sky and BMC, with Ivan Basso staying near the front for a possible counter-attack, if needs be.

Sky had some help from Euskaltel and Saxo Bank, Nibali’s lead came down to 1:15 at 30 kilometres out. Behind; Luca Paolini (Katusha) was between Nibali and what looked like around 30 or 40 riders left in the peloton. Along the shores of Lake Como the bunch had Sky on the front, but they were not making much of a dent on Nibali’s advantage as at 20 kilometres to go he still had 30 seconds; this would not be enough to win the race.

Nibali was caught at 16.5 kilometres out. Sky was controlling things with all the main men at or near the front for the final climb of the Villa Vergano in the last 10 kilometres.

Katusha had a very strong team, they took over the front as the climb started, Garmin put an effort in to set-up Dan Martin sat in second place, Basso (Liquigas) and Van Avermaet (BMC) were next in line behind Lovkvist for Sky.

Basso came to the front at 10K out as many a rider was dropped out the back. Oliver Zaugg (Leopard-Trek) attacked as the road narrowed on a cobbled climb through the village of Vergano, Dan Martin made his move with Joaquim Rodriguez (Katusha) and Pozzovivo again, Basso and Niemiec (Lampre) joined them for the chase down to Lecco. 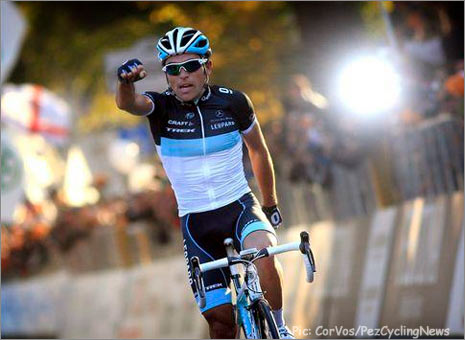 Nothing but net – not a bad way to score your first pro win.

At the bottom Zaugg had 3 kilometres to go with a lead of 21 seconds on Basso, Martin, Pozzovivo and Niemiec, with a Gilbert group further back. The Swiss rider Zaugg was in sight at the 1K Red Kite, but he looked like he could hold out as the others were not getting it together.

Oliver Zaugg had it in the bag with enough distance to roll over the line with arms held high for one of the most surprising wins in the year and for many a year! Dan Martin got second and Rodriguez was third. 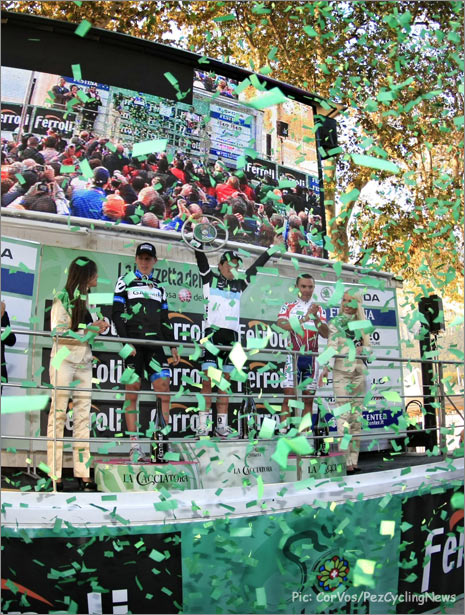 And so ends the 2011 Classics season…

What a great race and a brilliant course, let’s hope the date change doesn’t ruin what must be one of the most beautiful races of the season.

** Keep it dialed to PEZ for Roadside Reports from Jered & Alessandro!**