A quotation first, from Philippe Brunel’s chapter dealing with Milan – San Remo in that sumptuous book, ‘The Spring Classics,’ ‘Some, like Boonen, speak of a lottery. “They already said that in my era,” Merckx once commented, “but do you know many guys who won the jackpot seven times with the same ticket?”

Only those who haven’t won in the ‘City of Flowers’ talk of chance and luck, the facts tell a different story – Zabel with four wins and Freire with three in the last 14 years.

And you have to go back to 1996 to find a winner’s name which isn’t that of one of the great riders of the generation.

But even that name was a cool one, Gabrielle Colombo – that day should have gone to Max Sciandri, I once put it to the Anglo-American that Colombo never really won much before or since; ‘That’s true but he was a classy rider, he liked to party though – the good life you know?’

And that’s the word, more than any other that defines a Primavera winner; ‘class.’

It‘s highly unlikely that there will be any surprise winners climbing to the top of the podium on Saturday.

So let’s name some names, the PEZ crew see it this way:

Our man in Udine, Matt Conn says; ‘Oscar Freire (Rabobank & Spain) will always be my Zabel at Milano-Sanremo.

I can’t fail to tip him; he has been present in the front but not showy with his form, so I think that even if he isn’t 100% for this week he will rise to the challenge on the day. 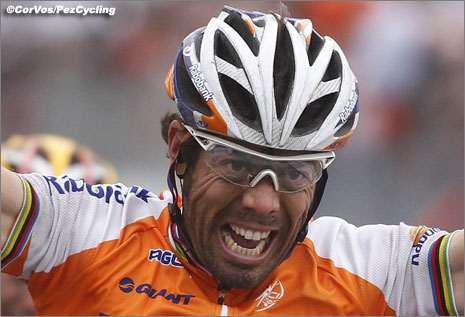 Philippe Gilbert (Lotto & Belgium) has to take top billing; form-wise you can’t go past him.

But I’m not sure that he can win from a big ‘modern Sanremo’ bunch and he can’t catch the bunch off guard because he’ll be so tightly marked.

If he does win, it’ll be an awesome display.

My outsider is the boy from Bishopbourne, Tasmania – Matt Goss (HTC & Australia). 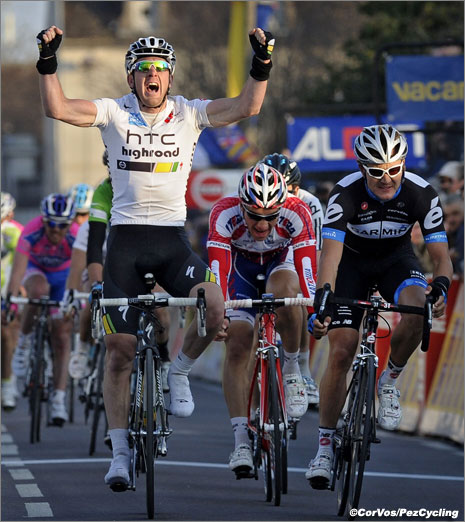 Matt Goss has had a spectacular start to his 2011 season – can he take his first Monument this weekend? Matt thinks so.

He deserves to lead HTC and be a race favourite – he’s proven time after time that he can get over the climbs.’

Out there in Scotland’s Western Isles, Gordan Cameron picks two of the same three – Freire, Gilbert and the man who should have made the podium last year, but was let down by the Liquigas ‘more chiefs than Indians syndrome’ Daniele Bennati (Leopard TREK & Italy).

‘Never write off The Cat!’ Gord wisely reminds us – referring to the rapid Spaniard’s nickname.

Al Hamilton has gone native out there in Alicante and it’d be a surprise if he didn’t pick Freire – along with Gilbert, Mark Cavendish (HTC & GB) and Heinrich Haussler (Garmin & Australia). 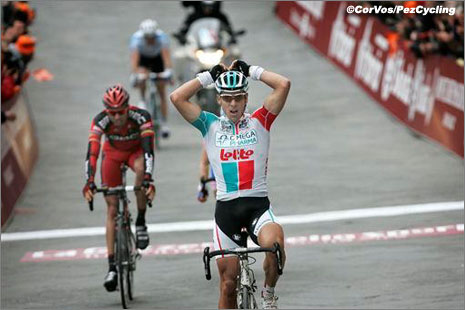 You can argue that Philippe Gilbert has gotten off to his best season start ever. Does that mean that the Classics victories will follow as well?

Jered Gruber, currently flying from Louisiana to Germany, then driving from Frankfurt to Milano for Saturday’s Primavera, doesn’t have too much of interest to add. We’ve seen the leading riders so far this year, so there will likely be few surprises.

Jered sees a field sprint on the horizon, and he sees Heinrich Haussler with his arms flung high to the heavens Saturday afternoon in Sanremo. Haussler has been impressive so far this year in races that aren’t 300 kilometers long -he has a solid sprint on a normal day, but in a Monument, Jered thinks Haussler will get it right this time. Of course, after that, the list of possibilities is nearly endless… 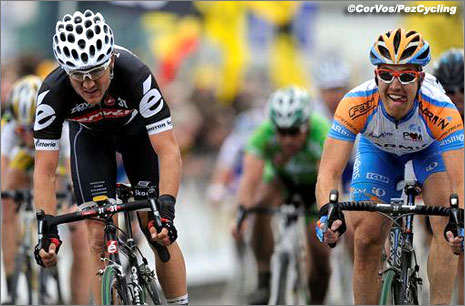 Heinrich Haussler and Tyler Farrar have gone from sprinting rivals to teammates in 2011. Add Hushovd into that potent stew, and you’ve got a trio of terror for everyone else.

Let’s look at those names and perhaps one more.

This is his race; and with a rampant Rabobank squad at his disposal the only way he won’t be in the mix is if it’s a very easy day with sunshine and tail winds over the Capi.

Gilbert: the finish is wrong for him; he needs a technical uphill finale to best demonstrate his skills – unless he can slip away on the Poggio.

But the chase through the streets of Sanremo is so Hellish that only a Cancellara at his best can resist it.

Goss: Seven wins by mid-March says all that needs to be said about Goss’s form.

He’s won Paris-Brussels, Philly and Plouay – this could be the day he joins the greats. 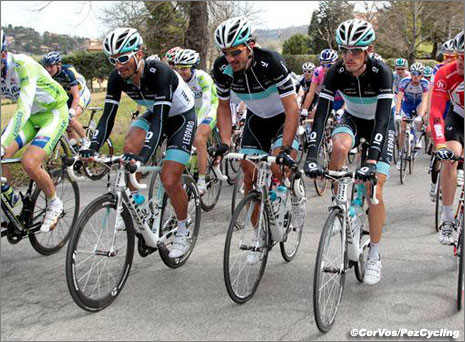 Bennati: Impressive last year but aided hugely by a magnificent lead out from Daniele Oss he finished fifth.

Does he have the form, can Leopard TREK deliver him? I think ‘no’ on both counts.

Haussler: Looked in terrific shape in Paris-Nice and has proven that he has what it takes to win this race; but was unlucky to come across a Cavendish at his amazing best.

Cavendish: If he was bluffing then it’s worth an Oscar, but at Tirreno he looked uncomfortable and ‘flat’ – it’s unlikely he’ll be there on Saturday. 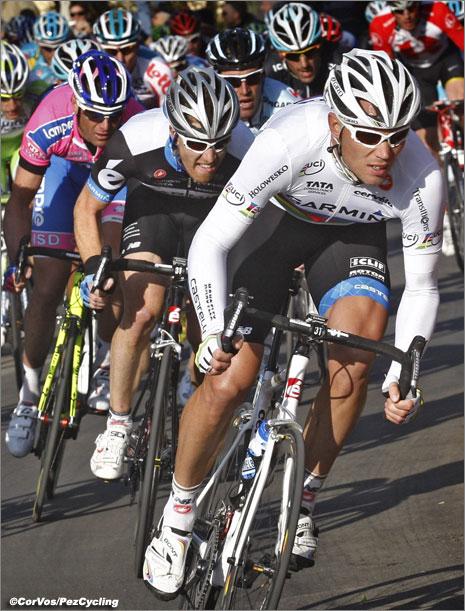 A win in Sanremo on Saturday for the World Champion would be the kind of triumph that would be talked about for years to come.

Hushovd: Tyler Farrar’s inability to hold the big Norwegian’s wheel in one of the finishes at Tirreno said all that needs to be said about the world champion’s strength.

He’s a proud man and will want a big win with that rainbow jersey on his back; it could well come this Saturday – particularly if it’s a hard day, like last year. 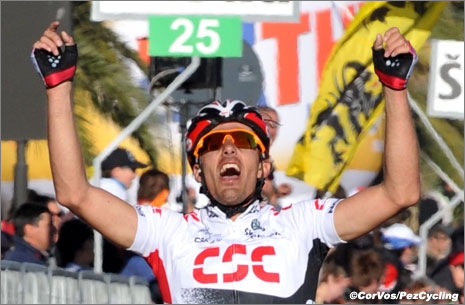 Only a foolish man would write off Mr. Cancellara.

Cancellara: He’s done it before and a win in the short closing TT of Tirreno indicates that he’s running into form – but he’ll have at least one Garmin shadow on Saturday and it’s unlikely he can repeat 2008.

Farrar: The closing speed is there, his team is the strongest – with Haussler and Hushovd, the American from Gent makes three of the hot favourites for JV’s team.

If the men in black are honest with each other in the closing stages and they avoid the crashes, it’s hard to see how Gamin won’t win. 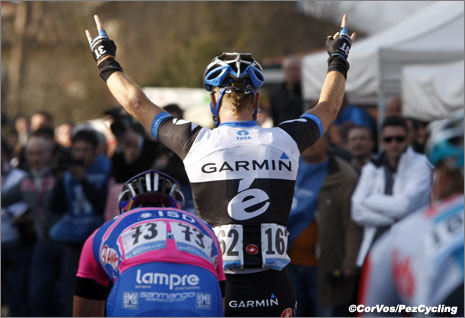 Farrar has been excellent so far this year. He goes into the year’s first big Classic as one of the main favorites.

But there’s one name that hasn’t been mentioned – Alessandro Petacchi (Lampre & Italy).

His preparation running into the race wasn’t ideal last year and he still made the podium.

I read it the same this year, no win, but he’ll make the podium – its Ale Jet we’re talking about here, remember?

PEZ will have men on the ground and men glued to the monitors to give you the best coverage of what for many – including me – is the best single day bike race on the planet.

La Primavera: Do We Really Need It?