PEZ In The Trenches: The Grenoble Six Finale!

With four days down, the Grenoble Six comes into the final stretch. Two more nights to settle the score, two more nights of full-on racing, two more long, long nights for our man on the scene, Ed Hood, to get through. Let’s see what happens in the two deciding evenings of racing!

Wander across the car park to the baker, buy the baguettes – but not on a Monday, they’re shut.

Usually the baguettes from the Casino shop are OK, but today, when I got them back to the cabin they were like the ‘rubberised’ ones you get back in Scotland.

I had to strike out again for our reserve baker which is a few streets away. 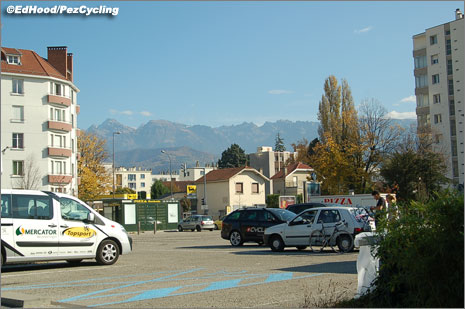 Even the best runners get it wrong, sometimes.

It’s usually cloudy in the mornings but it burns off by late morning – it would be really nice to have the road bikes here.

The city is ringed by mountains but there’s a great network of roads along the valley floors for those of us who aren’t into ‘col busting.’

One of the good things about working the sixes is that you get to know people better; Luke Roberts is a cool guy, an Olympic, twice Commonwealth and three times world team pursuit champion. 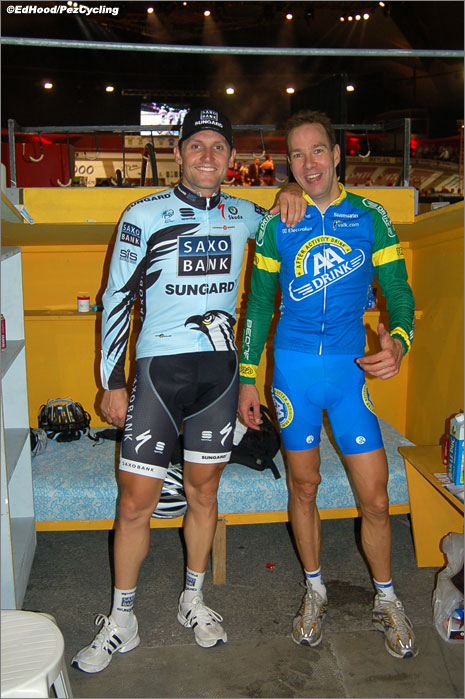 His knowledge of the discipline is encyclopedic, he was explaining to us how the emphasis has changed from being high cadence based to strength based.

Jack Bobridge is riding 53 x 13 in the individual and team pursuit.

He also explained that not all the riders in a team might be on the same gear – it depends on the individual.

He was telling us that when he was in the team which rode 3:57 to claim the world record, he thought his legs would explode with the lactic after just two K, but he drove to the end and reckoned the ride was; ‘perfect, it’ll be years before anyone beats that.’

He was on the team which rode 3:56 just one year later, but didn’t realise how fast they were going ’til after they’d finished.

The chases have been getting better as the week goes on, the French guys haven’t been taking quite such a pummeling. 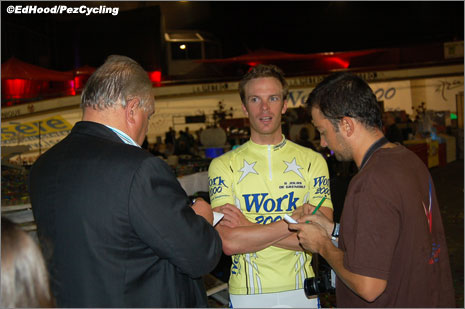 While the Spaniards impressed, Keisse was the man of the week.

But the team that’s surprising everyone is the Spanish one – aggressive and points-hungry in the sprints, scratch and devils – both of them have won medals in the U23 European champs and look set for a great career.

A man who’s having a few problems with his career is Franco’s partner, Alexander Aeschbach – ‘Aeschi’ had a bad crash on the Oerlikon track in Zurich back in August and as well as wrecking his beloved BMC Time Machine, he damaged five ribs.

In the 35 minute chase, he was in so much pain that it was difficult for him to sling Franco in to the fray. 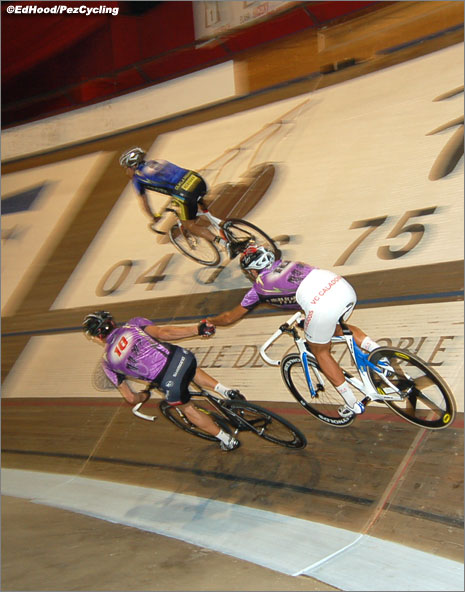 Let’s hope he’s better for Ghent, the track is 166 metres, not 210 like at Grenoble and the programme isn’t for the faint hearted.

On the tech side, I got a close look at Morgan Kneisky’s Look today; if you’d like one the same it’ll be 6,500 Euros, please – and that’s frame and forks only. 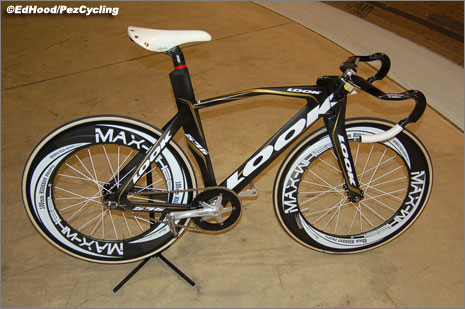 But you do get the stem and seat post. 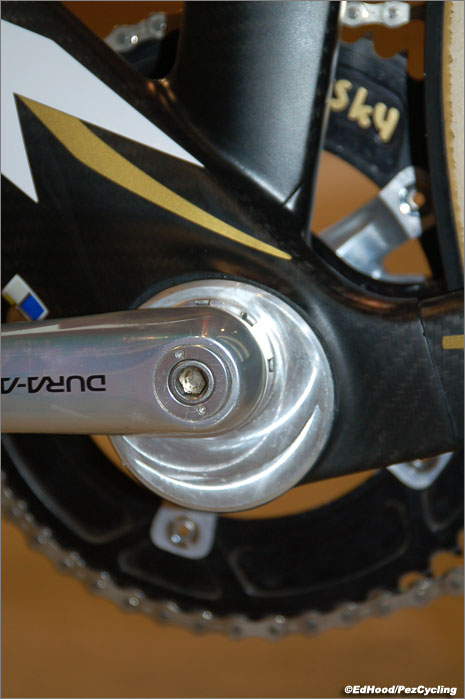 Kneisky’s is a mean looking beast with its 3T Sphinx bars. I asked Dirk which frames in his opinion would build into the best six day bikes, his choices were the Look and Iljo’s Dolan. 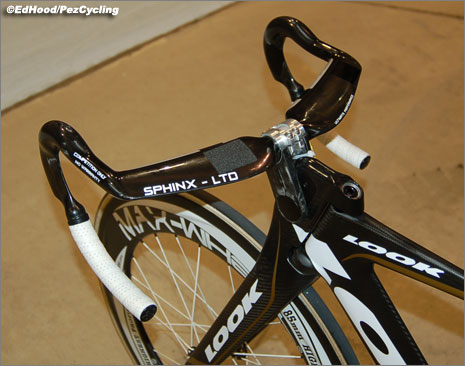 Can Franco’s Price and Alex’s BMC take yellow back to the land of William Tell?

Day 6:
Bar Le Clemenceau, 09:30 Wednesday – Kris is still asleep in the camper; this is my first visit to Le Clemenceau this year – it wouldn’t be a proper trip to Grenoble without at least a coffee in here. 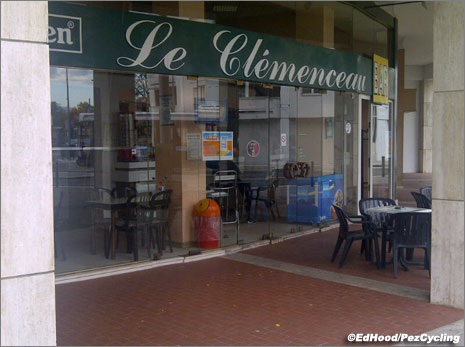 Le Dauphine, the local paper tells me that next year it won’t be a ‘6 Jours Cyclistes de Grenoble,’ it’ll be ‘4 Jours.’

So maybe this will be my last trip to Le Clemenceau?

Zurich has already gone down the four day route for 2011 and it remains to be seen how the figures will line up.

If the race is chopped by 33% then it’s inevitable that the riders’ contracts will be cut by the same amount. 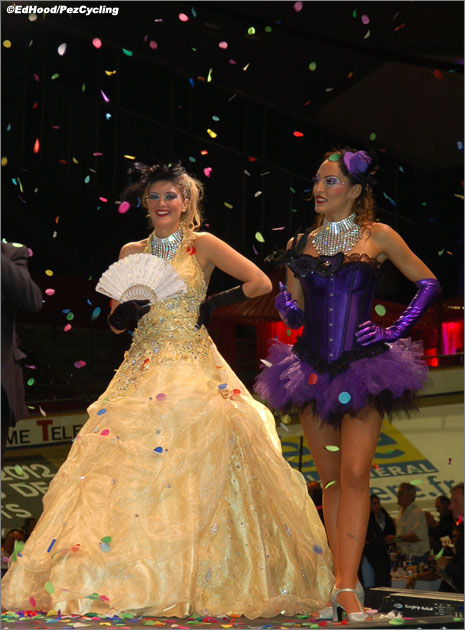 Despite the event’s best efforts, the numbers just don’t match up.

For soigneurs the math is already difficult, riders’ payments have been getting squeezed these last few years – some of the riders at Grenoble were on tiny contracts – whilst the price of fuel continues to rise; it’s a long way from Amsterdam to Grenoble and then back to Gent.

The days of soigneurs and runners may be numbered. 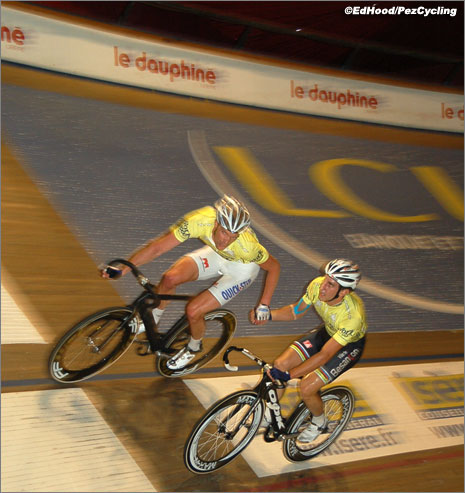 Iljo Keisse’s form held good as he took his third straight major win of the season – the Six Days of Amsterdam, the European Madison Championships and now, the Six Days of Grenoble.

It’s the man from Gent’s second win here; he took it with Matt Gilmore in 2005.

Keisse’s partner, Morgan Kneisky gave France her first home win in the Capital of the Alps since 1994 when Jean Claude Colotti paired with Dean Woods to take the laurels. 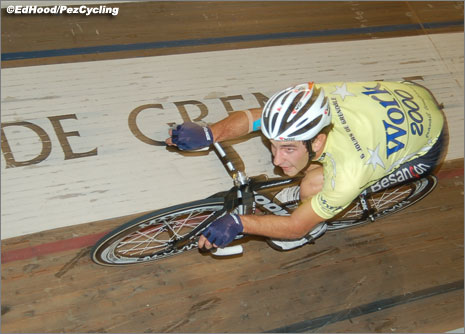 Classy though Kneisky is, he had to dig deep for the win; killing himself to hold the gap on their winning lap, whilst a ferocious Keisse blasted more daylight between his yellow jersey and le peloton. 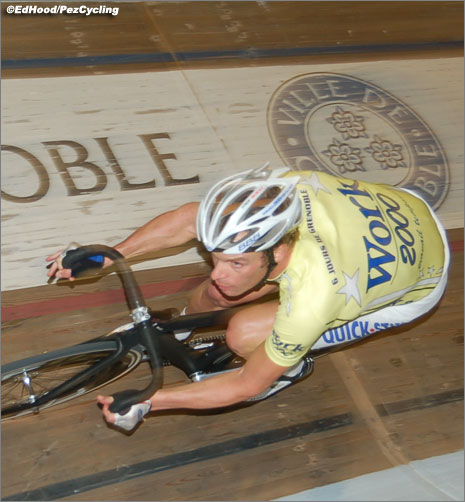 Franco Marvulli and Alex Aeschbach were no match for the winners; Marvulli missed Amsterdam due to a virus and Aeschbach is still suffering the after effects of bad crash back in August. 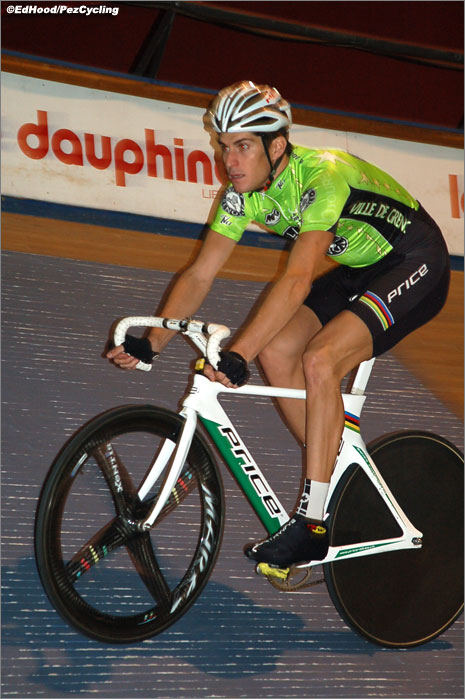 Young Jesper Morkov and Danish compatriot Marc Hester were fourth – watch for them on a podium, soon. 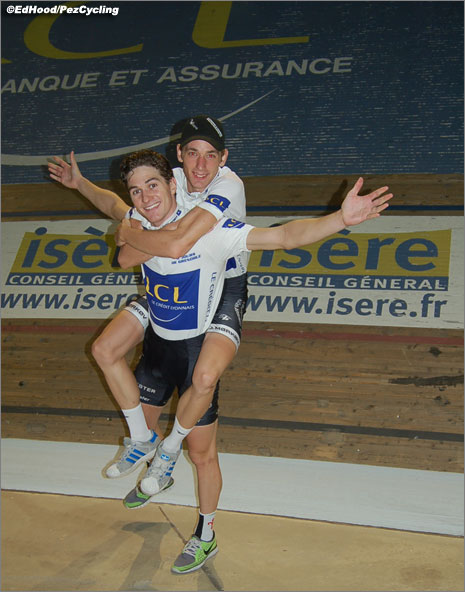 Morkov has good genes, Hester is very quick – and they’re both hungry.

But yesterday morning seems like a long time ago, now . . .

. . . they were playing ‘Last Christmas’ by Wham in the Casino shop. 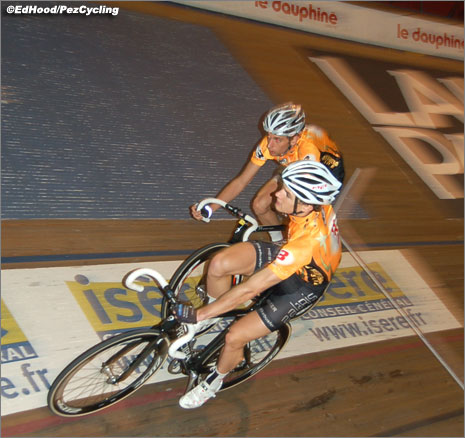 Morkov and Hester were solid – expect much more from them in the months and years to come!

With the mountains all round, it almost works; except when you walk outside and the autumn sun is warm on your skin and it feels like a Scottish summer.

I had to go to the Casino shop after the bakers, it was essential I drank Red Bull.

With the caffeine inside me and the laptop dialled to You Tube Music and Rare Pleasure with ‘Let me Down Easy,’ the jersey folding, cabin tidying and chores were no problem.

The programme is light tonight – all eyes on the 180 lap final chase.

Iljo will want to win, he does have excellent form, albeit his French wing man, Kneisky looks a tad shaky when they’re racing hard. 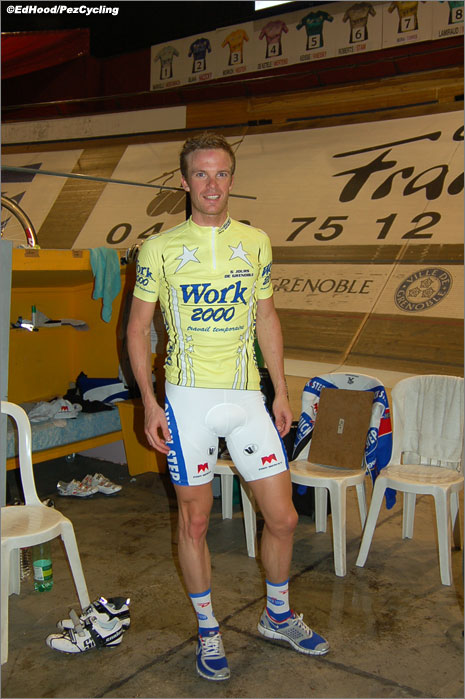 Iljo Keisse appears to be on another level at the moment.

Franco is the ‘Recordman’ for the race with six wins; this is his six day and not a title he’ll like to surrender easily – but ‘Aeschi’s’ ribs may play a part in the final outcome.

The first race was a sprint series, it seemed to come and go in a trice.

Next up was the time trial, Jesper and Marc teamed up with sprinter Charlie Conord to win.

The cabaret came and went and it was time for the last chase – but not before Kris received a special presentation for this being the 30th anniversary of his first attendance at Grenoble.

He was first here in 1981, looking after former world pro pursuit champion Tony Doyle who was paired with French man Serge Beucherie. 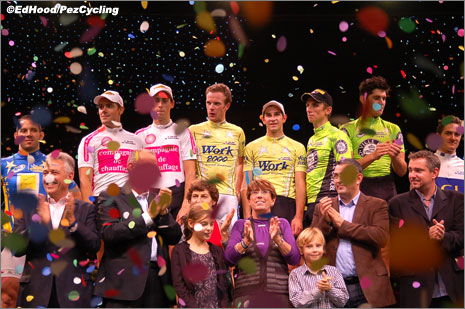 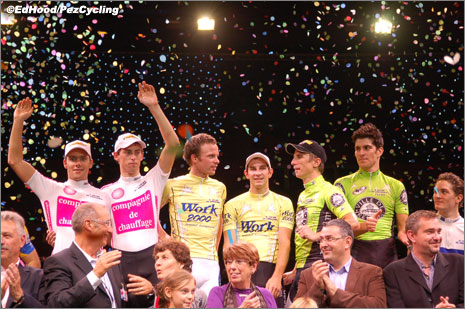 Freuler was a rapid track specialist but would sign contracts to ride a Grand Tour with one of the big road teams.

When the gun goes it’s time for runners to start humping the gear down from trackside. 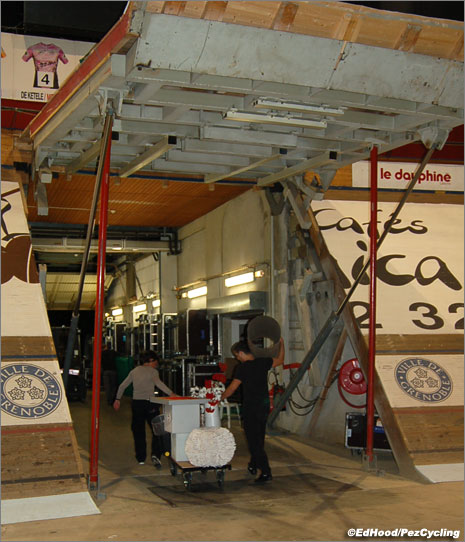 That’s all from Grenoble!

But I caught the end of the chase – and that look of relief on Morgan Kneisky’s face as he made contact with the tail of the string, just as the gun fired.

Grenoble, thank you again, we love you.