PEZ In The Trenches: The Grenoble Six, Part 1

It’s gone midnight, the stands are almost empty and only the hard core drinkers remain at the track centre tables. But just like on the Titanic, the band plays ’til the bitter end – there’s no singer this year, just one of many little cost cuttings we’ve noticed – but as long as Contis and Schwalbes rumble on the hardwood, the boys in the band keep it pumping.

Although, I’m at a wee bit of a loss to understand their repertoire; ‘It’s a Long Way to Tiperaray . . . 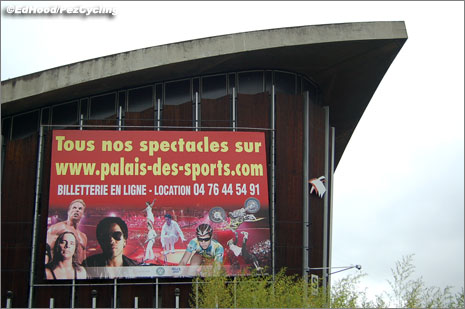 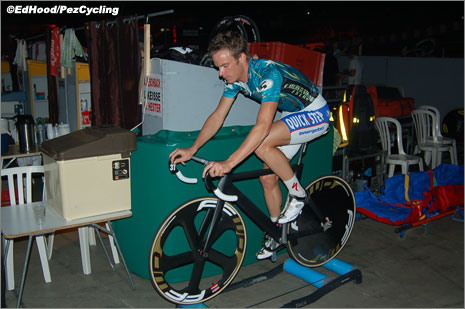 The six day season kicked off up in Amsterdam where a rampant Iljo Keisse paired with QuickStep team mate and home fave, Nicki Terpstra to win; and if that wasn’t enough, Iljo won the European madison championships for Belgium with Kenny De Ketele, the next day. 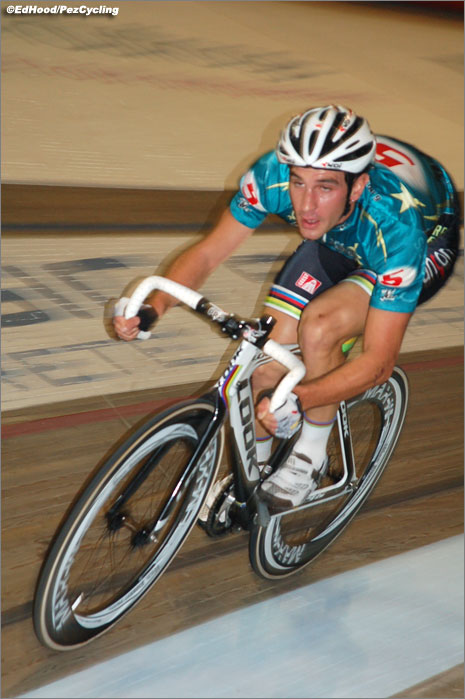 Kneisky was world scratch champion in 2009 and has won the overall World Cup in that discipline for the last two seasons.

The spectacular man from Gent is here at Grenoble, paired with classy Frenchman, Morgan Kneisky. 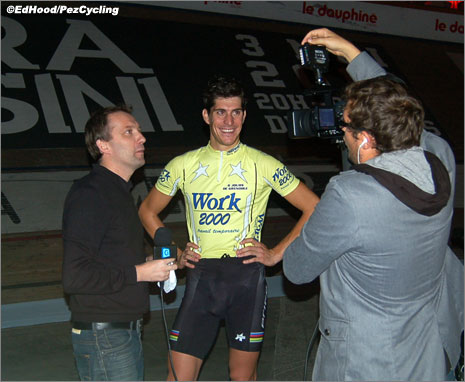 Their main opposition comes from the Swiss duo of Grenoble ‘Recordman’ Franco Marvulli, whose name appears six times on the fence as a previous winner – and his henchman, Alexander Aeschbach who’s won here five times with Franco. 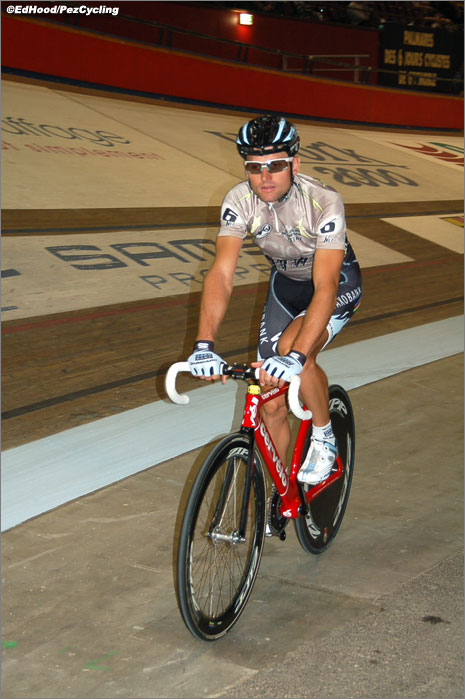 On the one occasion Franco didn’t pair with ‘Aeschi’ to the win, he rode with Australia’s former team pursuit maestro – Olympic, Commonwealth (twice) and World (thrice) champion – Luke Roberts. 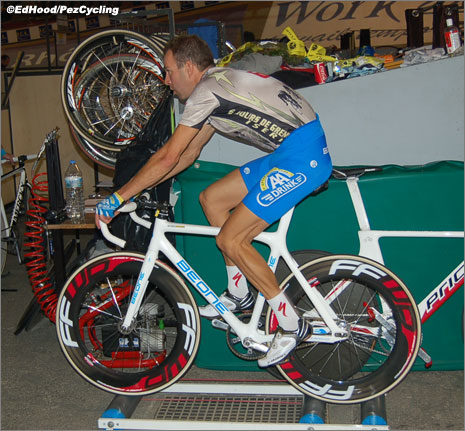 The genial Aussie rides this time with former six day top dog – but now winding his career down in his farewell season – Dutchman Danny Stam.

Stam’s pairing with countryman Robert Slippens was one of the most successful and spectacular of recent years.

But Slippens retired after a very bad crash and Old Father Time is finally catching up with Danny.

Consistent and solid Belgian duo of De Ketele and Tim Mertens look good for a podium. 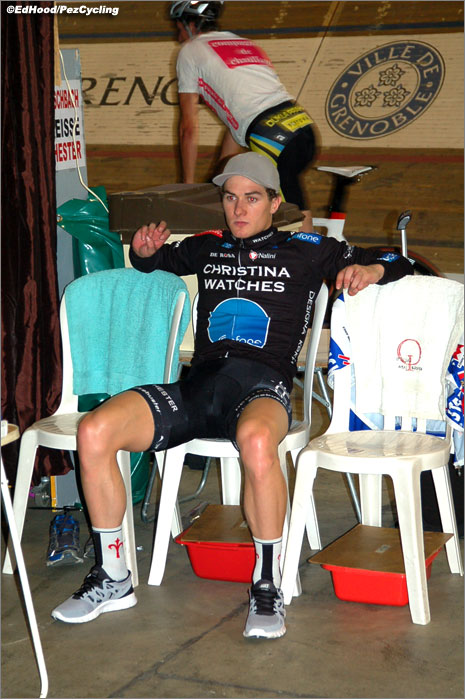 But that might just be a little bit beyond Danes Jesper Morkov (little bruv of Saxo pro. Michael) paired with Marc Hester.

But despite having a contract for every six of the season, Madsen is taking time out, this winter.

Former European madison champions Martin Blaha and Jiri Hochmann of the Czech Republic were the other big names – but Hochmann crashed badly in Amsterdam and is out.

His place is taken by another Czech, madison specialist Martin Hacecky – their preparation wasn’t helped by the fact that Blaha had to attend a presentation which went on until 9:00 pm the day before the race started here, meaning a 1200 kilometre drive though the night.

There’s a Spanish team and four French team but I don’t see any of them leaving scorch marks on the boards.

We have Franco, Luke and Jesper in our charge, all very different, but all good guys to work with.

Keisse/Kneisky won the first race of the six – a sprint series; it looked like a statement of intent from down here.

I didn’t pay too much attention to the circus acts, if you watch them too much, too early in the week, by Sunday they’re driving you crazy.

But there were two strongmen whose routine was amazing – I’ll grab some more pics before the week is out. 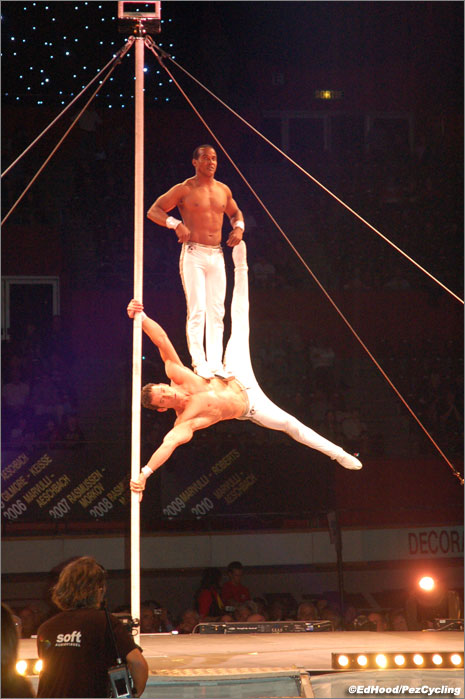 Another spectacle at the track.

As well as the circus cabaret, the track centre diners like their sprinters – champion du monde Gregory Bauge is here; but it’s hard not to notice that there are no foreign sprinters riding. 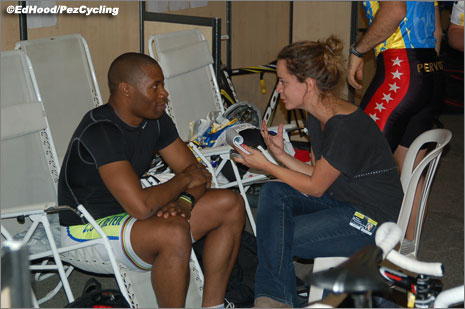 Previously, sprint big guns like Shane Perkins (Australia), Roberto Chiappa (Italy) and Craig Maclean (Scotland) would have been part of the tournament.

On the subject of track centre diners, there are 99 table in there, each with ten covers, at 63 Euros per cover. 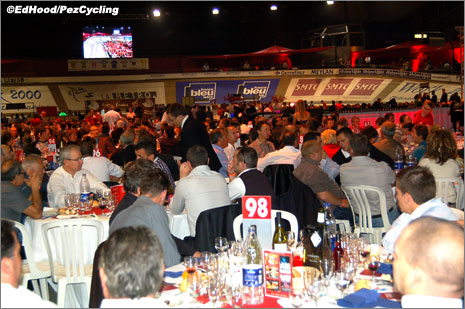 The restaurant was full last night, so even though they’re cost cutting, the revenue stream still looks solid.

The early part of the Paris Folies girls’ routine didn’t involve shedding too much clothing – but as the number wore on, we all perked up.

The second madison was only 20 minutes in duration – Danny Clark would be shaking his head in disgust; ‘if it’s not 100 K, how can you call it a proper madison?’ he’d say- Jesper and Marc took the honours and the evening ended with them ‘en jaune.’ 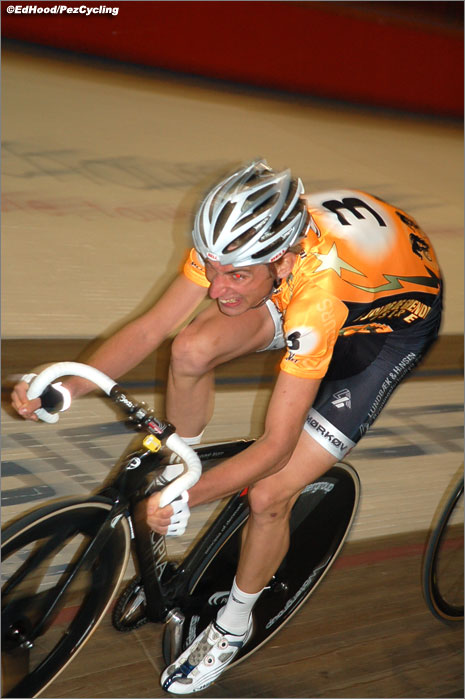 One down, five to go.

Day 2
The rollers buzz as the boys warm up, the regal music plays, the cabaret artist does his thing, pulling shapes on his steel post – Friday night in the Palais des Sports. 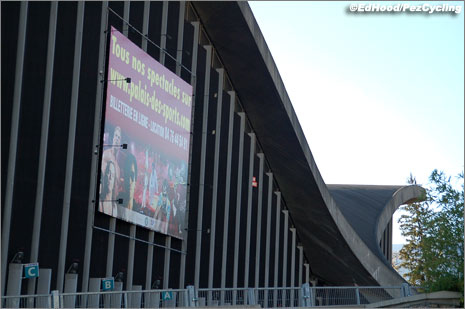 Another view of the Palais.

I emailed Don Allan to tell him the interview with him was up on PEZ, I asked if he had any memories of Grenoble;

‘Many memories from Grenoble, some great and some bad.

I loved the atmosphere – the baguette and coffee in a huge cup in the mornings; then baguette, jambon and fromage with a beer in the evening. 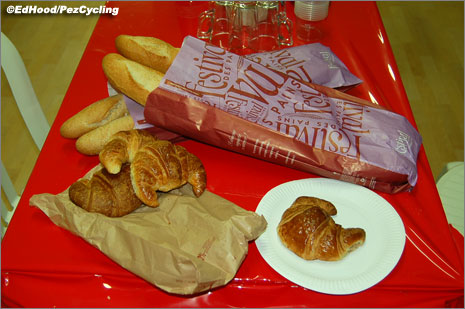 I loved the different cultures of Europe, I was like a giant sponge, soaking it all up.

I rode at least three sixes in Grenoble; once with Bernard Thevenet and twice with Alain Bondue.

Thevenet was fantastic and I even stayed with him at his house and trained with him.

Bondue – that was something else.

He was a nice enough person, but boy did I suffer with him!

On the first day I said to him; “three things Alain; don’t attack alone, I’ll tell you when to attack – and most importantly don’t ride too fast when you’re up top recovering and I’m in the race.”

Of course, he did all three things!

I had difficulty catching him to throw him in, so fast did he ride up top.

After the first chase I approached him to tell him about his errors; I had to nip
this in the bud!

But when I got to him he said “I know, me klootzak!” (a negative Flemish term that this being a family site, we won’t translate)

He continued this way for the next six days and I felt I had ridden the whole race alone, never on a wheel.

After the six I told Jan Derksen about it and said I hoped never to ride with
him again.

The next year I was paired with him again, Derksen said that Bondue liked me and had
asked for me again!

I heard Thevenet has something to do with the six. If he’s there say hello from Don.’

Monsieur Thevenet is in fact ‘chef de piste’ and we did pass on Don’s regards.

And on the subject of fast guys from the past, former world points champion and Grenoble six day winner Laurent Biondi is on the race organisation; and Gilbert Duclos Lasalle came a calling – he won here three times and also a couple of times at somewhere called Roubaix . .

First up is the keirin for the sprinters; then the pros, 36 lap sprint series – sprints every six laps. 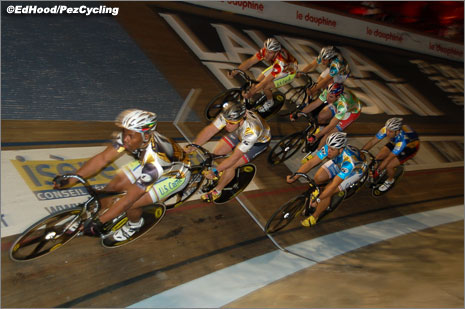 The contracts aren’t huge at Grenoble but the primes are good; the riders are paid by the number of points they accrue – this means that the likes of sprints and devils are hotly contested.

Although it’s not a North European ‘death six,’ there are some nice touches; like the ‘Speed Gazette’ news sheet which they produce every day to document the previous day’s racing.

Jeannie Longo’s smiling face on the cover connected nicely with an issue that’s been worming it’s way round my brain this last wee while. 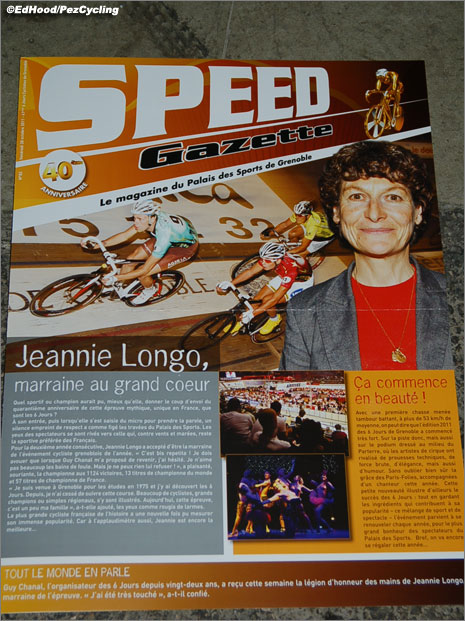 That of National Federations and the support they give their riders.

The UCI constantly snipes at the Spanish Federation; but I know for a fact that the Spaniards fight riders’ corners for them – and not just Contador’s.

The French, similarly haven’t thrown Longo into the bear pit as some North European federations seem only too happy to do.

But this isn’t talking about six day racing.

One of the runner’s chores is to clean the riders’ shoes and helmets.

Luke Roberts has been a pro for a decade but there’s not a trace of a slip in his standards – his kit is immaculate.

Saxo’s colour coded shoes and helmets give him a head start but his attention to detail is outstanding. 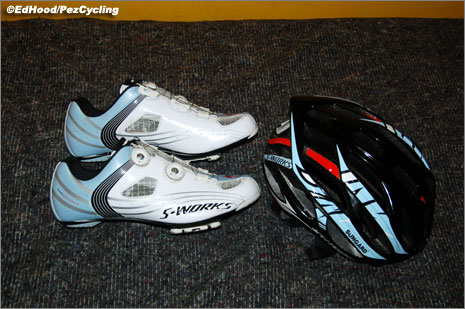 Chase – 35 minutes, it’s not savage but team 11 are way out of their depth, it becomes so bad that they can’t hold the string and plug round at their own pace – wasted.

If you’ve ever raced then you can’t help but feel sorry for them – I’ve been there.

Jesper and Marc get their yellow jerseys – finally – as race leaders. 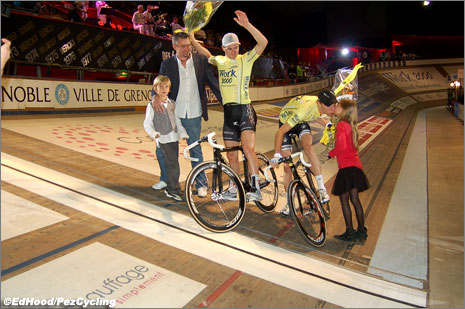 Circus, bad jazz – time trial, a six day team winds up with a sprinter on their tail they do a lap each from a flying start, swinging off after their spell. 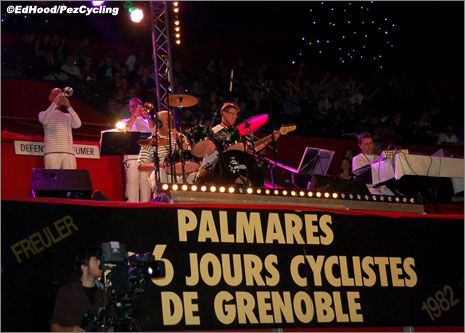 They used to do one which involved a hand sling for the sprinters, but too many of the fast men ended up sprawled on the boards, unused to the six day riders’ monster slings.
And wow ! 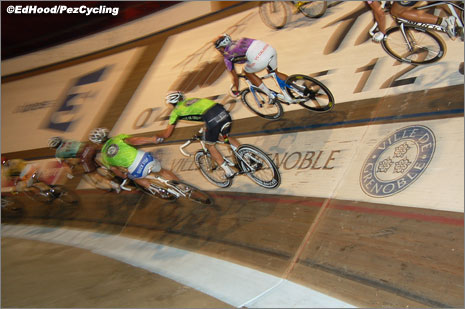 Jesper and Marc win, it did no harm to have kilometre specialist Francois Pervis as their third man, though.

‘My first ever win in cycling which involved a stop watch !’ says Jesper.

The strong man routine is good, I hope the pics do it justice.

More sprinters, the Folies girls – I’ll get some naughty pics later in the week, just to make sure you keep logging on.

The last chase, 20 minutes, and whilst it would be stretching it to say I could get round with them, team 11 manage to stay in the string – which speaks volumes about the speed.

Glenn Miller wafts down from the band stand, it must be midnight – yes, the witching hour has turned.

Meanwhile, the sprinters battle it out – Pervis is fastest, tonight.

Jesper wins the first devil, we get a quick burst of les Folies girls but the house is empty, except for the those still glugging expensive wine, in the track centre – they can stay as long as they like.

The Spaniard, Torres wins the second devil – just the team devil to go and I can take off these damn training shoes. 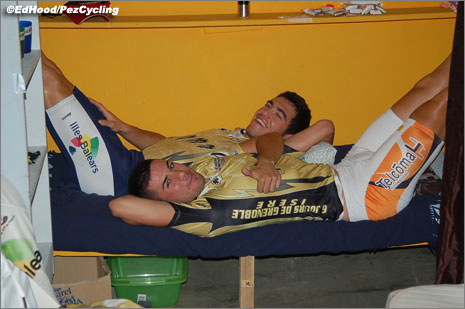 The guys spill down off the boards, Dirk grabs the bikes, I do that runner stuff.

One third of the way through – Saturday tomorrow and Franco gave me money to get Roquefort for breakfast, to go with the baguettes; it’s not all bad being a runner. 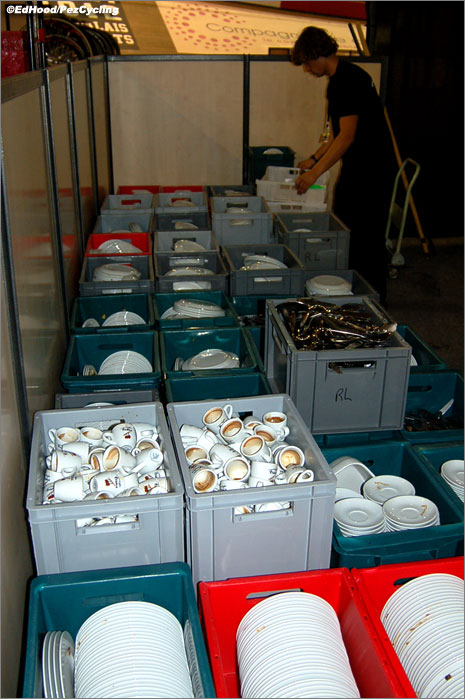 At least I don’t have to wash all of those.