PEZ In The Trenches: The Grenoble Six, Part Two

Adriano Baffi was in the stade last night, I snapped Duclos Lasalle, but didn’t get a shot of the little Italian, he was a dazzling roadman sprinter and top six day man, he won here in Grenoble four times. His face is beaming out from the front of today’s Speed Gazette, the race’s daily news sheet. I’m finding the rhythm of the race, now – I slept well and didn’t stumble too much on the way across the car park to the bakers. The Grenoble Six rolls on…

Presentation time; bang on 8:20 pm as Daniel Mangeas reels off the palmares of every team as they go up on to the cabaret stage and give the crowd a wave. 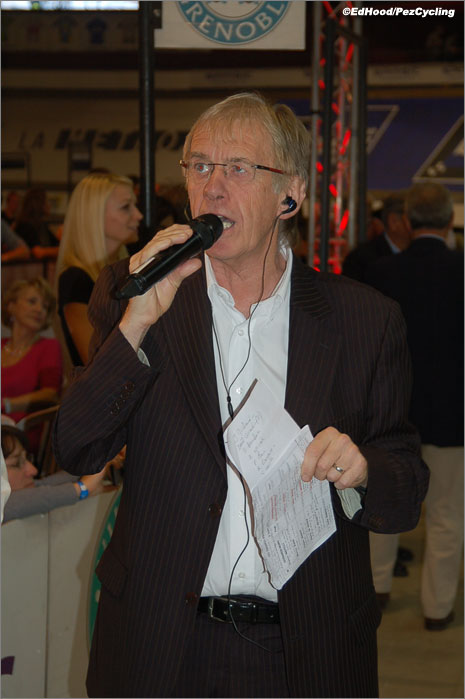 Daniel Mangeas – the voice of Grenoble…and the Tour de France.

Just in case there’s any doubt about the hierarchy here, the sprinters go up after the six day riders, with King Gregory of Bauge last man to appear, his world champion’s jersey so white it could be in a washing powder commercial. 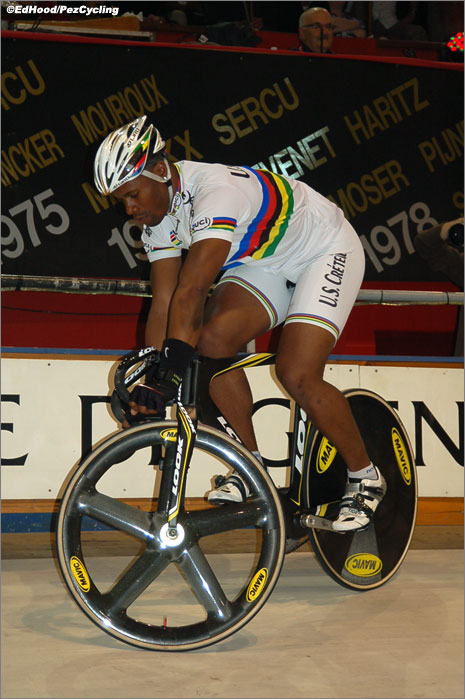 There’s only one chase worth the name here, 35 minutes and although it’s not a long race the boys are a bit jumpy, quiet, warming up on the rollers, pretending to be interested in the sprint racing.

As it turns out, the chase is a damp squid, even team 11 hold the string for most of the time – Luke and Danny win, Jesper and Marc retain the lead. 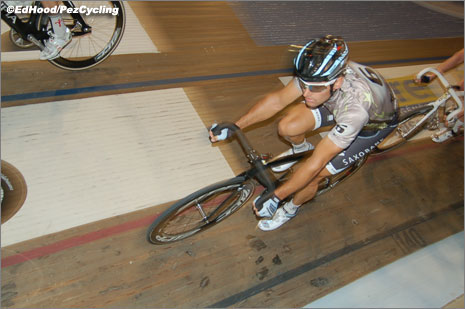 And, if you’re familiar with my previous rants from Grenoble, let’s open the, ‘seulement en France’ file.

‘No limits,’ a standstill competition, Viktor would have a convulsion fit. 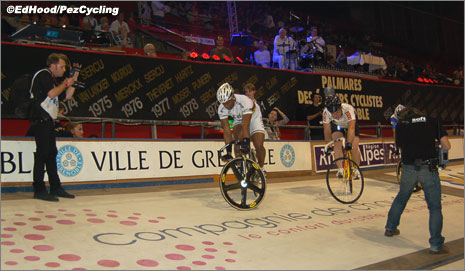 Arnaud Tournant (France) who still holds the world flying kilometre record – despite Chris Hoy’s best efforts – has been dragged out of retirement to go head to head with Gregory Bauge.

I once endured Arnaud popping a standstill for 45 minutes to ‘win’ this nonsense, sorry ‘fascinating contest.’

But was it as boring as the Ladies’ Worlds road race championship, this year?

Kris took advantage of the down time to talk to Laurent Biondi, former world pro points champion and now on the race organisation. 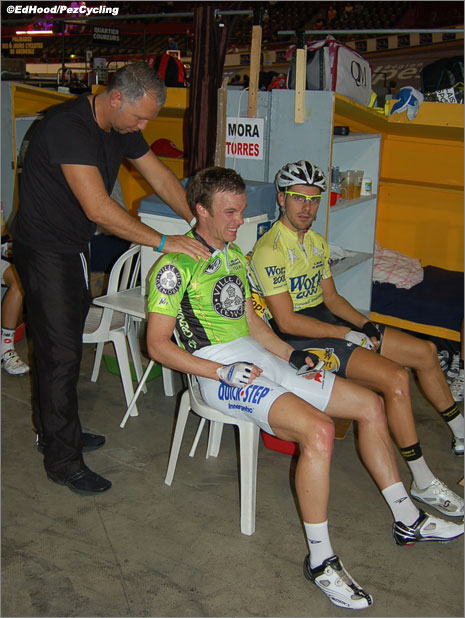 Iljo Keisse gets a little neck massage in between races.

He says that attendances have gone up slightly for the Six Days of Grenoble, these last two years.

Seriously though, in a world of vanishing six days, it’s good to see a race doing well.
In 1934, there were 34 six days world wide; when Kris started in 1976 there were 21 races – for this season it’s eight. 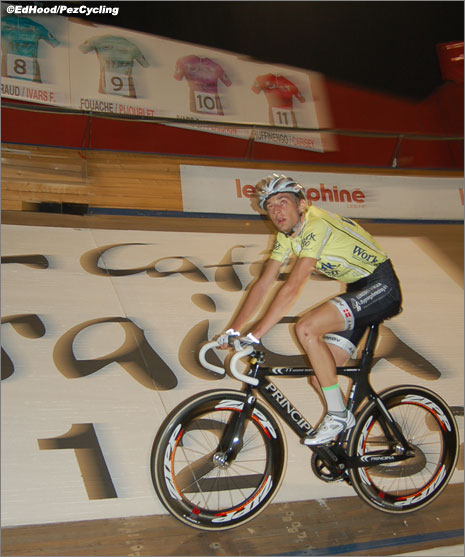 The thing about being a PEZ journo is that you can send in the best copy, good pics of champions old and new – but the response is always the same; ‘what about the distractions?’

So I edge up to the security guard with the severe haircut to see about getting into the track centre. 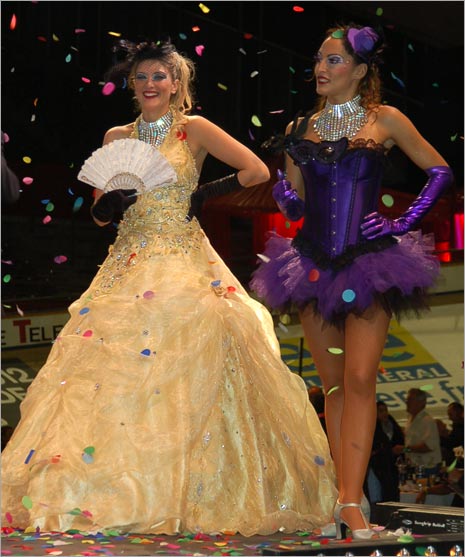 I amble up to the start line to see my chum the commissar, it pays to have friends in cycling – ten seconds later, there I am, snapping away.

‘Roll out the Barrel?’ a man shouldn’t have to work under these conditions; 34 minute standstills are one thing, but World War 2 tunes?

The last chase, just 20 minutes, the gun fires, the Spaniards win – it won’t go down in six day legend but it gets us closer to bed time. 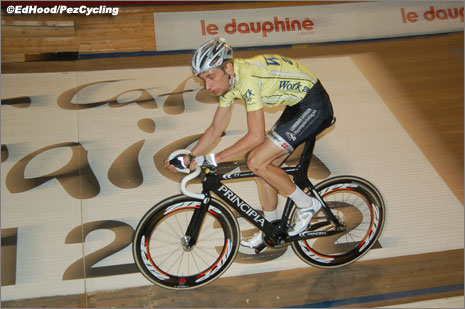 We’ve not said much about equipment yet – don’t worry, we’ll have a look at what the big guns are riding, before the week is out.

But we’ve got a nice bit of kit in the cabin, 3T ‘Sphinx’ bars; Franco bought them from one of the French guys. 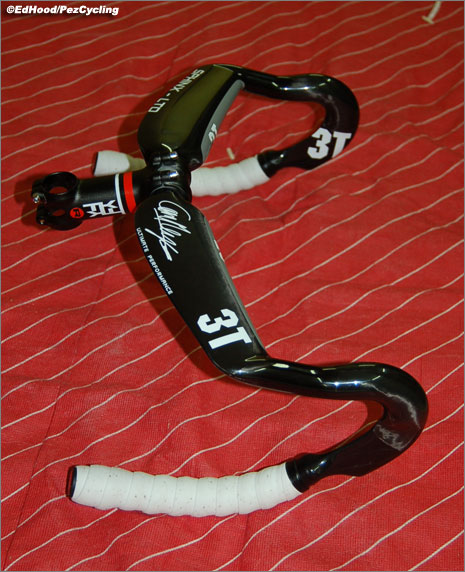 Iljo and Morgan Kneisky started the race with them but Iljo has taken them back off; they don’t suit his style of sprinting – if he’s out of the saddle and throwing the bike around, because the bend has such a forward throw it’s easy to catch your wrists on the back of the top part of the bars. 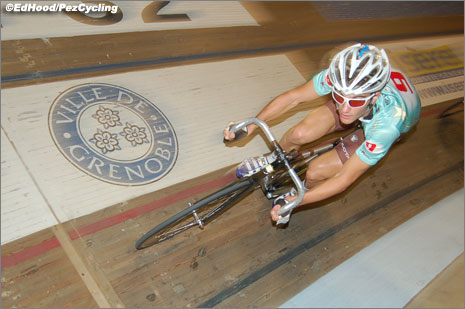 The last three devils pass quickly; one of the pee pails hasn’t been used and the clocks change across Europe today so we get an extra hour in bed – it’s a good evening in Grenoble.

I was talking to Franco last night about the Zurich Six – which is actually a ‘Four Days of’ this year in order to cut costs.

He was saying that when the race came back after an absence from 2001 to 2007 it was greeted with record crowds – 8,000 plus on the first night with people turned away. 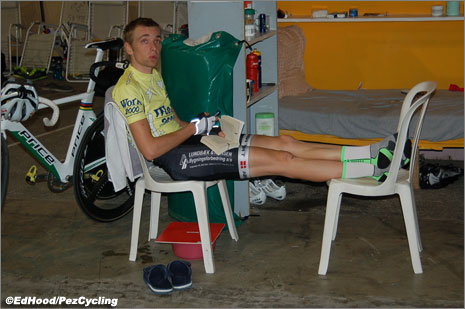 But over the last few years, as the novelty has worn off, the attendances have slid.

This year, the organisers have decided to introduce three concerts during the course of the race, to try and boost attendances.

His take on the decline in the six days is that people have so much more choice now – there are so many sports and so many ways to view them that it’s hard for organisers to keep attendances up; unless it’s Gent, of course.

Time to talk hardware – carbon is king on the road but there are still a few six day riders sticking to good old Scandium aluminium alloy.

One of the most exotic beasts here is Alex Aeschbach’s BMC ‘track machine trc 01’ – the BMC’s aren’t monocoques, their CAAD sculpted tubes are joined by massive aluminium lugs – albeit the chainstays and bottom bracket are a single moulding and the seat stays are a ‘yoke.’ 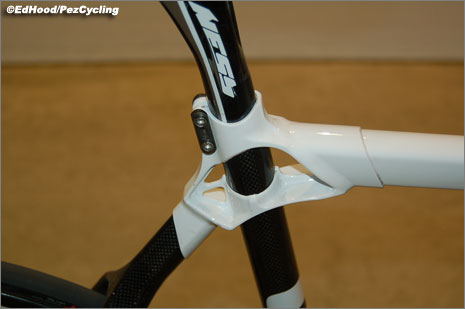 The lugged design is most apparent at the seat cluster – you love it or hate it.

Last year Alex was riding a BMC ‘Speed Machine’ time trial bike on the boards, but with track ends fitted – unfortunately it was broken in a bad crash. 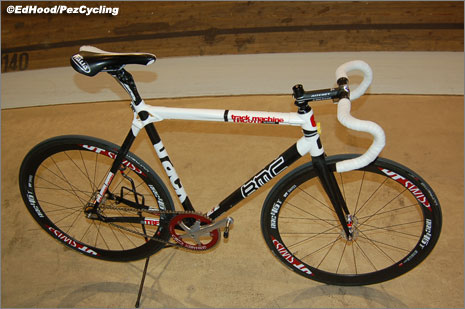 Alex is waiting on a new one and reckons he could feel the aero edge and increased stiffness of the Speed Machine.

Iljo Keisse’s new toy is carbon, too – it’s anonymous in matte black but we think it’s a Dolan. 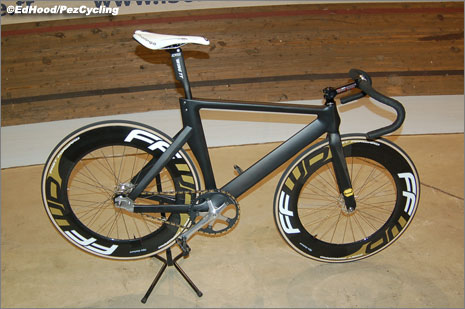 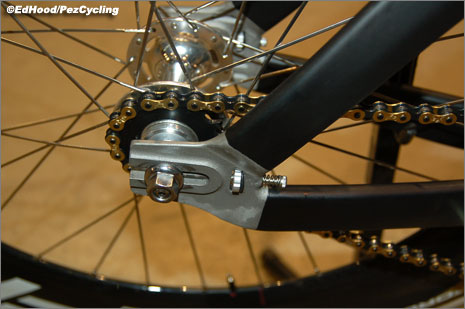 It’s the bike Iljo rode to European madison championship glory at Apeldoorn but whilst I’ve seen him train on the beast, he’s been racing on his trusty white, Scandium Eddy Merckx. 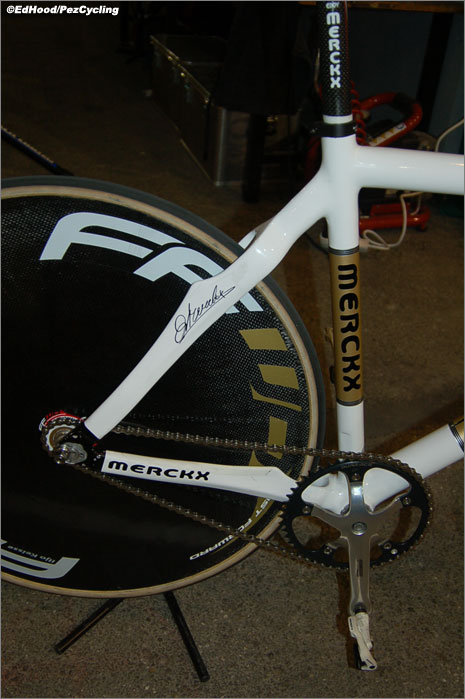 There’s probably a contractual reason in there; the Euros are for national teams but here Iljo wears his QuickStep shorts so must ride the sponsor’s frames.

The Danes are on Principias; carbon, not the lightest but very rigid and solid platforms for a six day man to practice his trade from. 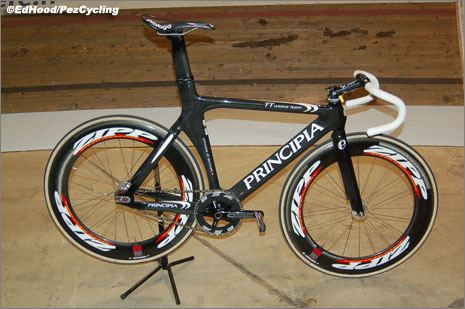 Danny Stam too is on carbon, Beone is the name on the frame, but it looks like a Giant to me, the integrated seat post gives it away. 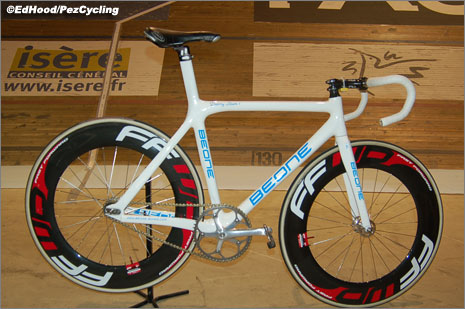 Danny’s bikes always gleam white and there’s not a chip on them; a hard thing to achieve in a world where bikes are constantly being stripped, transported and re-assembled – not to mention sliding along the boards. 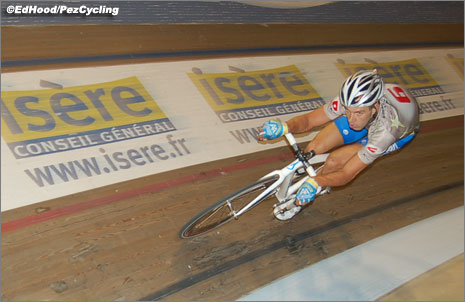 Danny Stam trying to take a lap aboard his Beone.

Belgians De Ketele and Mertens ride for Topsport Vlaanderen with Eddy Merckx as the frame supplier, they’re Scandium with a nice black and white paint job. 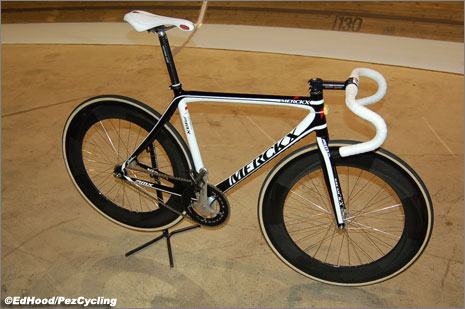 ‘When I were a lad,’ all of the six day riders rode 36/36 hand built spoked wheels on large flange hubs, tied and soldered with rims which had welded joints, not riveted.

The thought process being that the constant battering of the G-forces into the bankings would loosen a riveted rim joint.

As ace six day mechanic Dirk Dekeyser explains; ‘the deep rims give shorter spokes which make the wheel more rigid, but even so, I sometimes still weld where the spokes cross to make the wheel stiffer.

If the wheel moves, then the tyre may end up rubbing against the frame.’

As for the tyres, Continental’s dominance of the six day tyre market is being challenged by fellow German manufacturer Schwalbe – but Franco still swears by his Conti’s.

Transmission is via 1/8″ pitch chain with Campagnolo and Shimano cranks still to the fore but SRAM’s ‘Omnium’ brand is making inroads due to it’s very stiff integrated axle/right hand crank design and ‘external’ bearings with a much wider distance between the races.

This brings the crank closer to the bearing and makes for more efficient putting down of the power – with most riders on 170mm cranks.

Pedals are a mixed bag, Speedplay, Shimano, Look – but only one rider riding Time, that I could see.

Handlebars tend to be shallow and ‘square,’ although Danny Stam and ‘Aeschi’ ride deeper ‘anatomic’ bars.

But the thing is, when the string is ‘full gas,’ it’s down to your legs, not your handlebars. 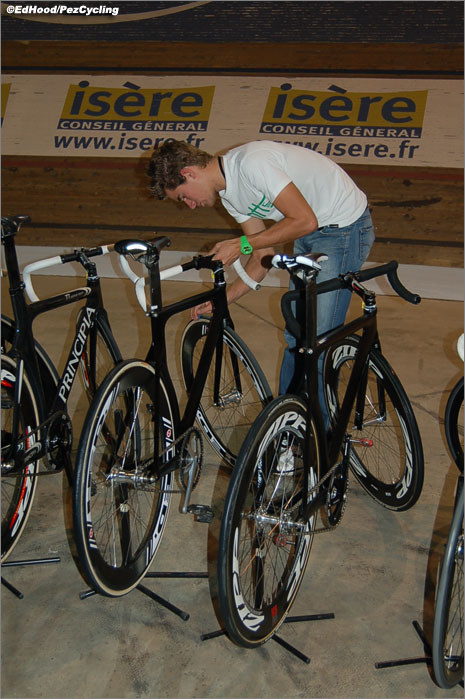 Tire check before the evening’s racing.

It’s nearly 8:00 pm, the juniors are riding their points race and soon the pros will start to drift up for the presentation; best check those cabins.