PEZ didn’t make day one, but it ended with Franco (Marvellous) Marvulli in the lead, partnered by big strong Dutch GreenEdge recruit, Jens Mouris. Franco is in the PEZ cabin along with Jesper Morkov and a ‘back to the fold’ Alex Rasmussen. Let’s head back into the trenches into the singular world of the six day!

Rotterdam is a nice six day, a strong field, good advance publicity, easy Metro communications to the modern hall and a tradition of good six day men ensure that there’s a healthy gate. 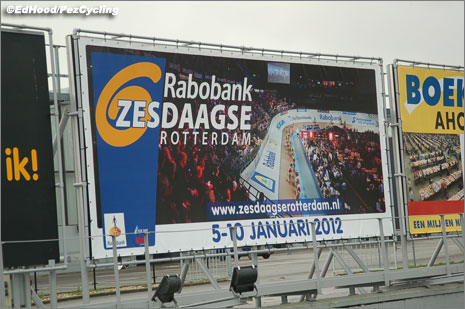 The six was first run in 1971, as Kris says; ‘this is a new city, the old city was bombed flat during the war and there was no venue before ‘71.’

The 70’s were a strong time for Dutch six day racing; Peter Post, Leo Duyndam, Gerben Karstens, all legends of the sport. 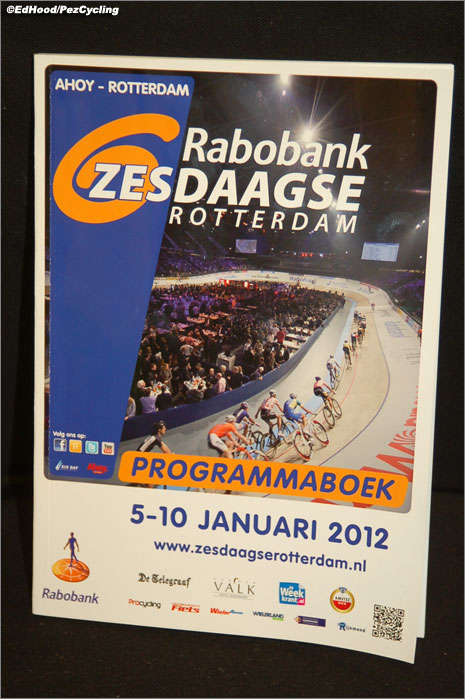 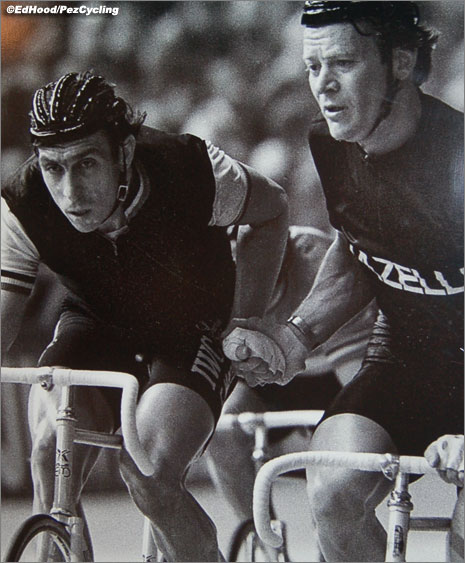 Ten of Pijnen’s wins came here in Rotterdam, which unsurprisingly makes him ‘recordman’ – he won four times with Duyndam, three times with Clark, twice with Sercu and once with Urs Freuler.

The track is a temporary structure, on steel frames with plywood riding surface, 200 metres, 13.5 degrees in the straights and 49.5 on the bankings.

Apart from Marvulli/Mouris the other big names are Stam/Havik – Danny has won here five times, most recently last year with Leon Van Bon. 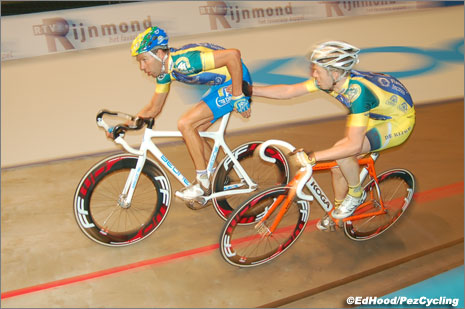 Danny Stam and Yoeri Havik are together to defend Stam’s 2011 title.

This is his farewell season and he hasn’t been flying but his motivation will be strong and a podium is just possible.

Partner Yoeri Havik was good at Amsterdam and is building a rep for himself.

Terpstra/Keisse is another good combination, albeit ex Dutch road champion Niki Terpstra is a little too long and lean to be a real ‘squirrel.’ 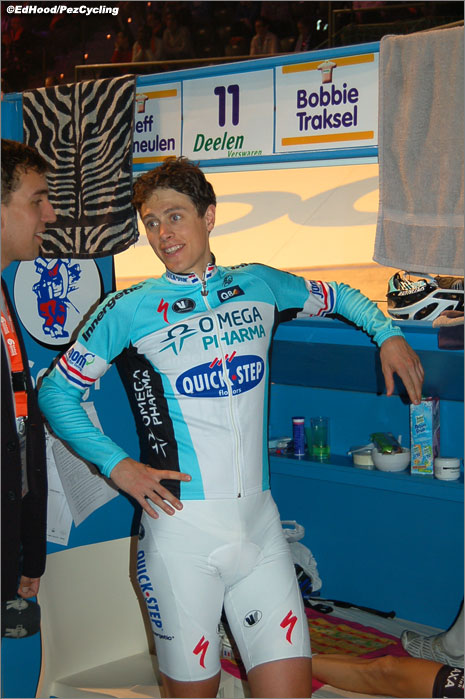 Keisse continues to fly and Jesper rates him the strongest man on the track and almost as ultimately fast as flyers Rasmussen and Wim Stroetinga.

Current Dutch elite road champion Pim Ligthart rides with Potsdam Bear/Terminator/Big Bob (you choose) Bartko and are another possible for the podium. 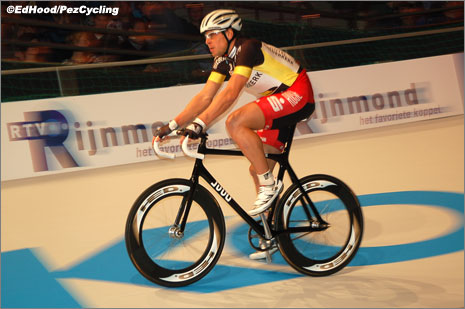 We’ll go with Potsdam Bear. That’s a good one.

But if I had to lay my Euros down, I’d go for Schep/Stroetinga – Schep is a very classy track rider, a winner at Gent in the past, former world points champion and silky smooth under pressure.

Stroetinga isn’t as smooth as his partner but is very rapid – he was world junior scratch race champion in 2003 and has two Worlds senior scratch silver medals in the cabinet at home. 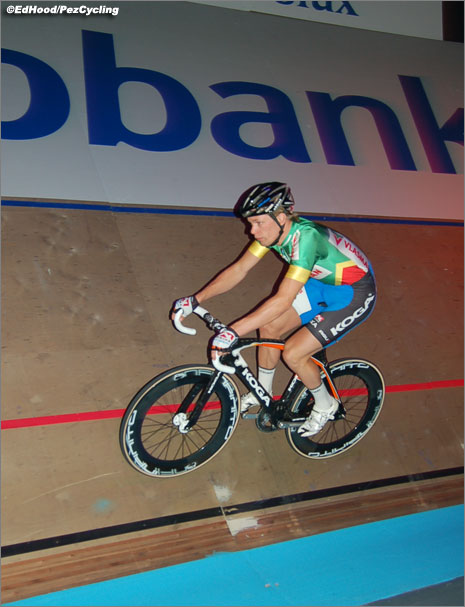 With the scene set, let’s talk about the race – hot gossip on day two was the news that world sprint champion Gregory Bauge managed to lose not one but two world titles (sprint and team sprint) in one day due whereabouts/no show misdemeanours with those pesky testers.

World record holder for 200 metres and Bauge’s partner in the Worlds winning team sprint trio, Kevin Sireau is here for the sprint tournament.

I saw him slumped in a chair this morning, mumbling into a cell phone – and who can blame the man, it must be terrible to lose a world title through no fault of your own. 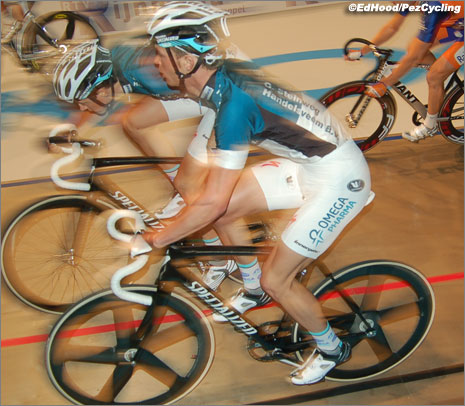 The racing was hot from the start.

My first night back in the world of washing machines, bidons, biscuits and taking the blames for everything that goes wrong was spent remembering what my job is.

I got my last outing at Zurich and you get rusty – but by the end of the night I was back in the swing, sitting on the fence and enjoying the last chase.

It was a toughie, Bobby Traksel blew up badly and so did team 12, weaving around on the boards, unable to hold the wheels and a danger to the riders around them – anyone who tells you that six days are arranged and ‘cosy’ should have been here on Friday night. 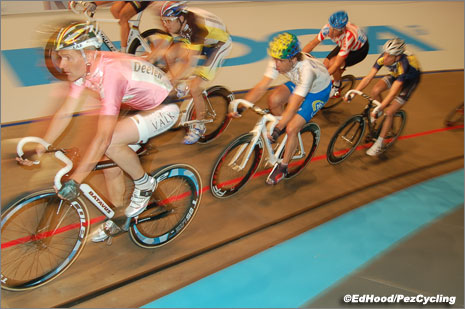 Franco and his big team mate still lead, so morale in the cabin is good.

But there’s been a big mistake at this race; the band are actually excellent, they can sing, play their instruments and are entertaining – what are these six days coming to? 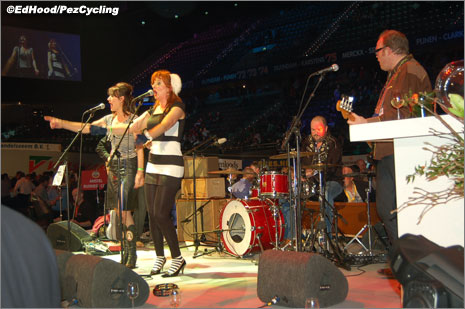 More tomorrow – and we’ll maybe even talk about the U23’s and girls racing.

SATURDAY
Right said Fred’s ‘Stand up for the Champions’ plays for the winners of the evening’s UiV cup – that’s the U23 race, it’s a bit like mass cage fighting on wheels. 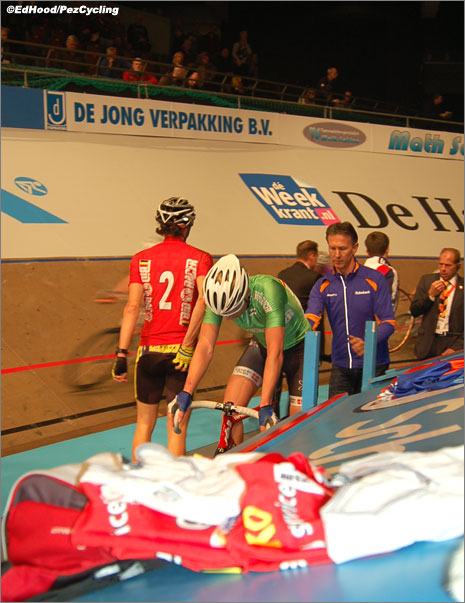 There was the usual crash, but fortunately only pride was hurt – many of the big stars came up through the UiV, Alex, Michael Morkov, Marc Hester, Kenny De Ketele . .

Sailor’s ‘Girls, Girls, Girls’ is the tune at the start of the women’s omnium, its cool – but like I said last year, ‘maybe you have to be here?’

The first madison is a ‘potato chase’ to let the little guys catch back a few laps.

I was reading the other day that the term ‘potato chase’ comes from the fact that in the old days the riders who weren’t riding for the win would stick a spud under their seat so as the top guys could see that they weren’t serious opposition.

However, I’ll stick with the explanation that I’ve always thought was the right one and which Kris confirms. 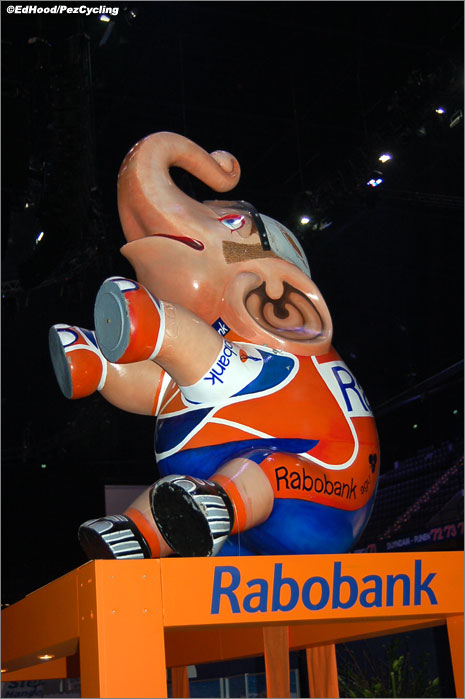 Namely, that in the old days, when primes from the crowd were a big deal, farmers would bring in sacks of potatoes to offer as prizes.

Racing for these would be beneath the dignity of the big stars; but a sack of spuds was a very desirable prize for a ‘little’ rider with a family to feed.

Waxing lyrical as I was about this race I did overlook one thing; like the song says; ‘It’s Gettin’ Mighty Crowded,’ down in the rider area.

We have three in one of our cabins – two of whom aren’t ours, Wesley Kreder and Melvin Boskamp – nice guys, but I don’t envy their mum’s when it comes to tidying their bedrooms. 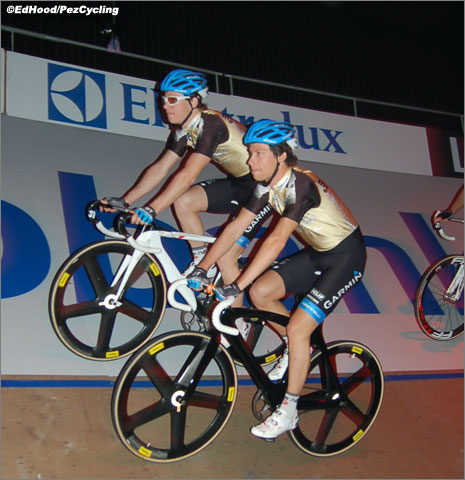 Those guys know how to make a nice neat cabin look like a cargo plane crash.

Once the pro racing got under way things took a turn for the worst with Alex Rasmussen’s partner, Nick Stopler coming down badly in an early elimination and damaging his right knee. 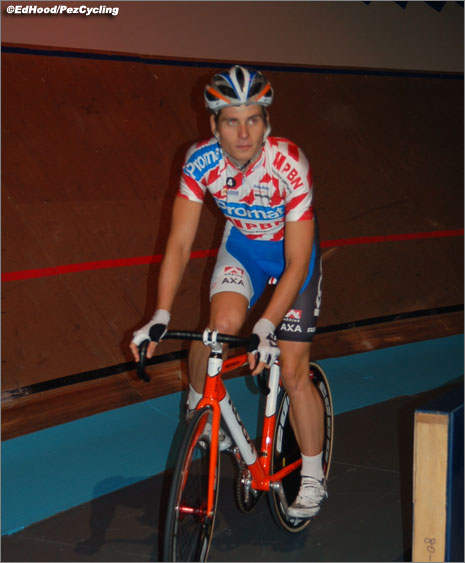 Those who saw it screw their faces up at the mention and some say it could end his career, with muscle and tendon sliced through.

Let’s hope for the best for Nick.

The sprinters tournament is good to watch, there’s a one lap time trial – world record holder Sireau (9.572 with discs front and back, in Moscow) is fastest so far with 10.312 (lap record 10.305, Chris Hoy) – match sprints, keirins and handicaps. 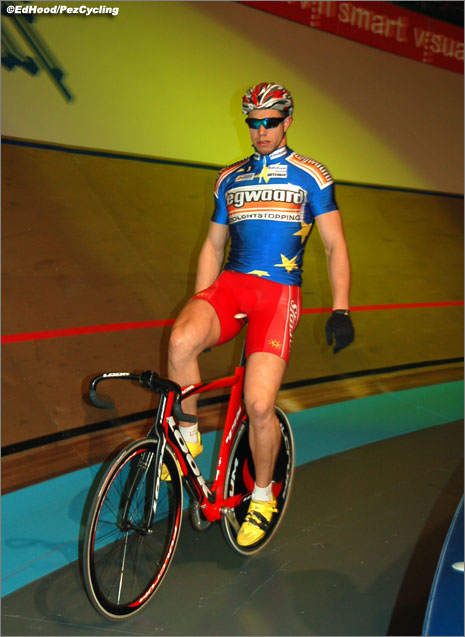 American rider Andy Lakatosh is up against Sireau and Bourgain from France plus versatile homeboy, Teun Mulder – it’s not easy for the man from across the Atlantic in that company, but they’re all pros and most verdicts are centimetres, rather than lengths.

I had to push off for our mechanic Dirk in the Derny – when you’re new to running that’s exciting stuff, these days I try to duck it especially if it’s a big rider, like Alex. 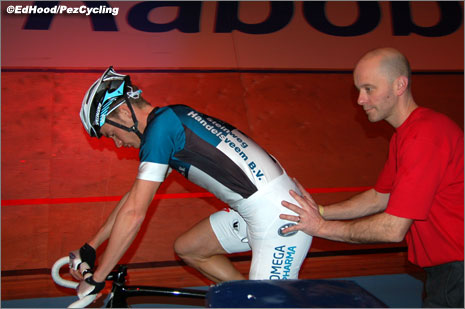 I got him to speed and in without too much drama – not that it matters, the Dutch guys win every Derny.

Schep and Stroetinga won the two lap time trial – they’re a class act but I’d like to see them pitted against an in form Alex with Michael Morkov. 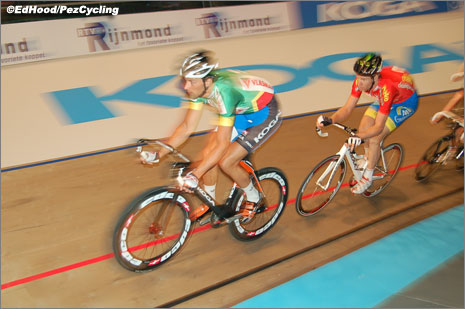 Michael only rides one six day this season, his home event in Copenhagen.

Michael is probably the most equipment conscious pro on the circuit, although Iljo likes his bikes to be ‘just so.’

The Belgian is on a new super light Specialized here, now that he’s back with QuickStep he has to ride the team frame, as does partner and trade team mate, Nike Terpstra. 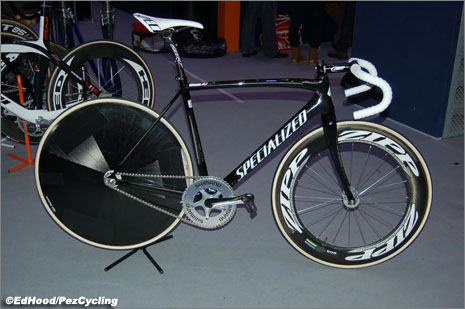 His mean ‘Stealth’ Dolan sulks on its stand as the Specialized gets to pop those wheelies when Iljo takes a lap.

Stam and Havik ended the night leaders, but not before Mulder surprised Sireau from a long ways out to take the sprint. 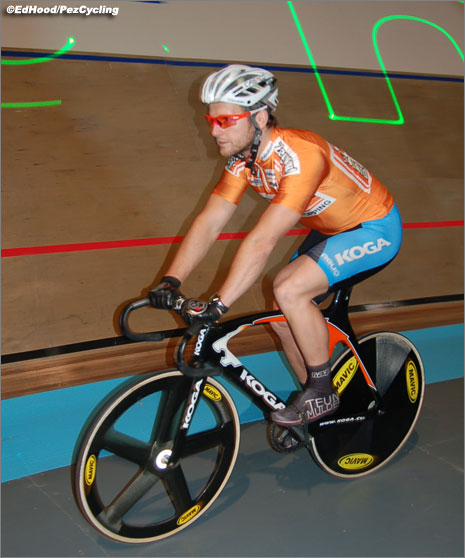 That’s us half way; it’s an early finish tomorrow but an early start too,

SUNDAY:
‘Sunday Bl**dy Sunday’ that’s what Bono sang, I know what he means, bed in the small hours then up early for a noon kick off.

Frans the chef here does a good breakfast spread for the boys – his assistant, Edwin is a quantity surveyor in the ‘real’ world but loves the sixes so much that he spends much of his holiday allocation helping Frans at the six; he’s a big Danny Stam fan. 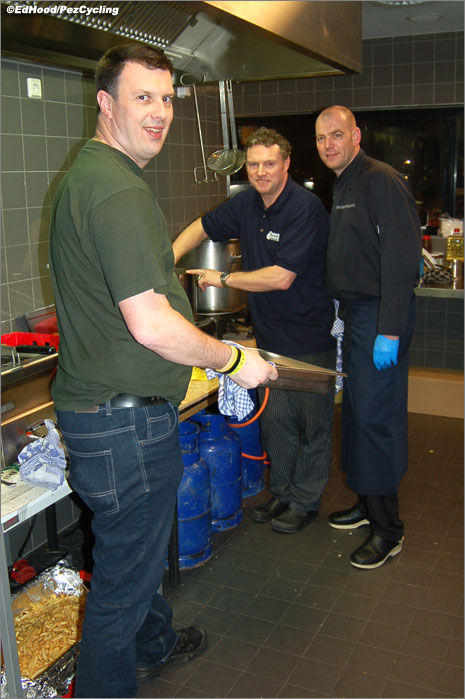 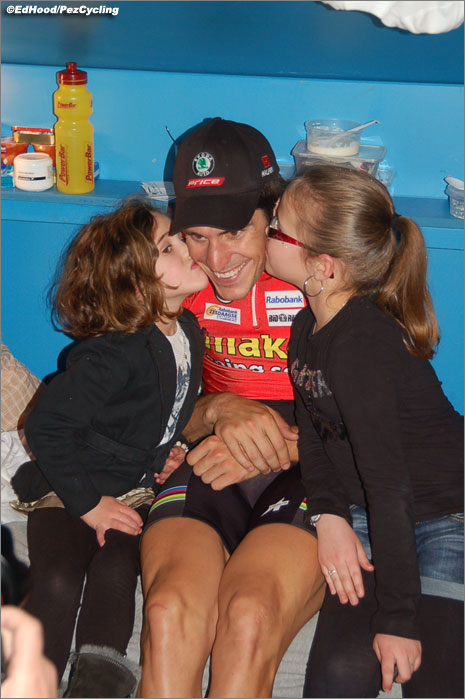 Franco gets some kisses from two young fans.

The Sunday afternoon session is a ‘family day’ with lots of racing for the kids and autograph hunters roving in packs – they love to look at the bikes; ‘why are there no brakes?’

On the subject of hardware there are a few changes at this six; Bartko goes from Cervelo to Giant but retains his forward saddle position. 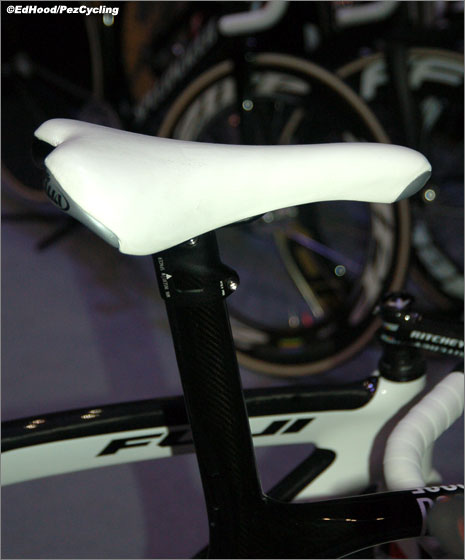 Alex goes from Principia to Cervelo and makes the change to ‘Sphinx’ bars – along with Cam Meyer he’s one of the riders who pioneered the ‘on the tops’ style of riding in the six days. 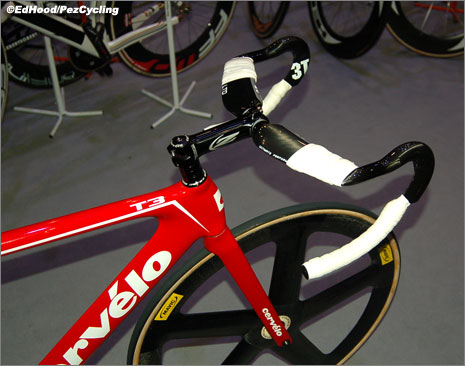 The business end of Alex’s Cervelo.

When poor Stopler crashed, there was talk that his ‘Sphinx’ bars did the damage to his knee – but Alex reckons that’s not the case, saying that he caught his knee on one of the metal struts of the fence top rail.

Whilst the Vacansoleil guys in the race have stayed faithful to their Ridleys, those big swathes of black masking tape over the decals on the white paint aren’t the answer; the team rides Bianchi for 2012.

The afternoon seemed to drag but the time trial brought me back to life – Schep/Stroetinga, again. 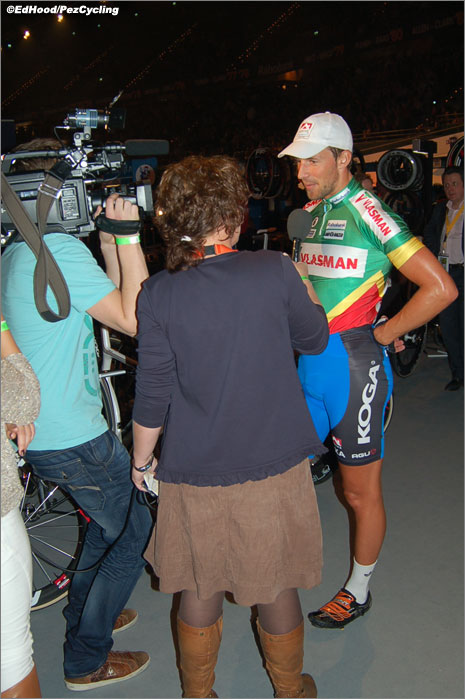 The last chase got a wee bit tough towards the end, no one was really struggling, but Franco was thirsty – three drinks in a half hour chase?

It was good to hear that gun fire to signal the end of that madison – and Franco/Jens Mouris go back top of the leader board, so it’s a happy cabin again for the boys.

Toolbox: How Much Protein is Enough?

PEZ In The Trenches: The Gent Six