If there was justice in the world, Clara Hughes of Canada would be world ladies road race champion – but there isn’t and Giorgia Bronzini of Italy wears the rainbow jersey for another year. It was a long day for PEZ, especially the afternoon with a ladies road race which refused to spark until the shadows were getting long…

Vik didn’t beat about the bush on yesterday’s U23 road race; ‘that was the biggest load of s**** I’ve ever seen for a world championship – an overgrown kermis !’ 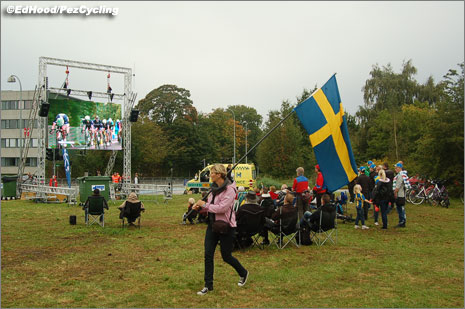 09:00 am and the fans are already sitting in front of the big screen.

It’s a huge field, 170 young, inexperienced riders on the technical sections of this course will inevitably mean crashes – let’s hope for nothing too serious. 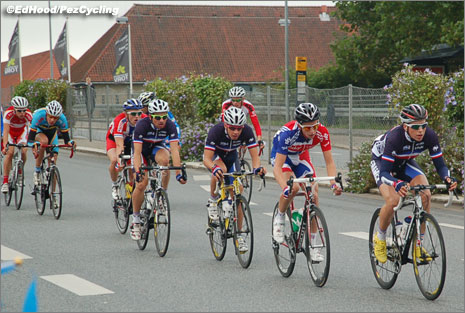 The 17 year olds immediately begin to teach their U23 brethren about aggressive racing as around a dozen go clear – including three French.
Lap two and the break is over, a French man and a Belgian have eased clear at the bottom of the finish hill – the multilingual swearing as the bunch cranks right into the finish straight adds colour to a quiet Danish Saturday morning. 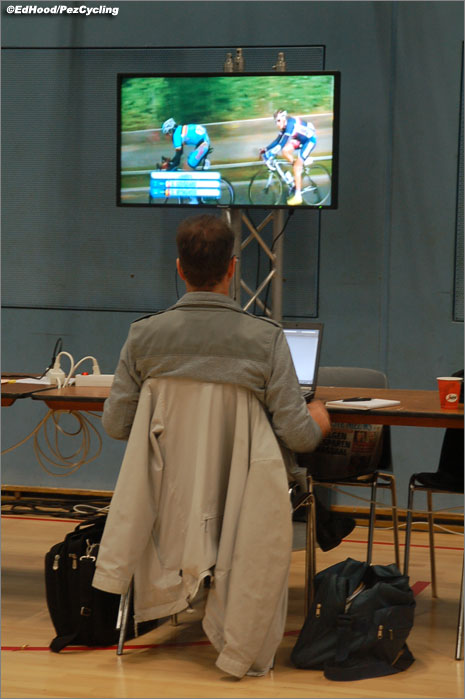 We miss two ‘live’ laps to set up shop in the press room but we keep abreast on the monitors; the breakaways are Alexis Gougeard for France and Daan Myngheer for Belgium – a big winner on the Flanders junior kermis scene. 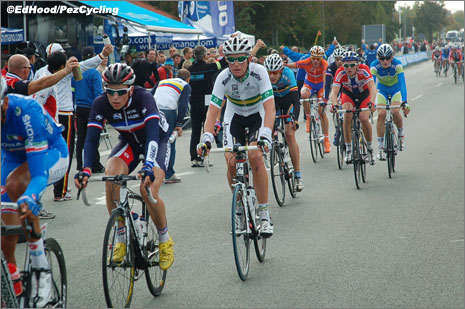 But the peloton is hungry and with two to go it’s all together – I’m thinking ‘bunch sprint’ again. 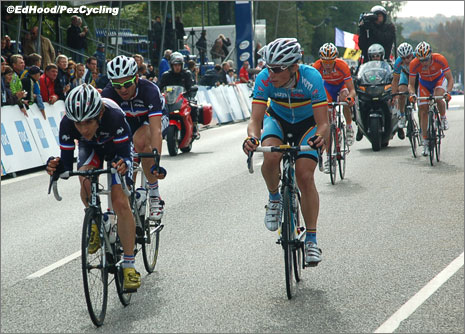 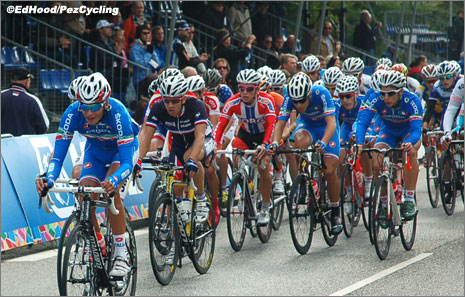 The bell, five are clear by 21 seconds, it’s unlikely it will last as the Italians mass; into the right hander at the bottom of the hill and there’s another crash one of many, today.

The photogs and soigneurs gather, the UCi drugs chaperones hover but the break has stuck to it’s guns and stayed clear – just.

Pierre-Henri Lecuisinier times it to perfection and leaps clear of the break and the rapidly closing howling pack to win for la Belle France.

Two men’s road races; two French winners – over to you Tommy and Chava. 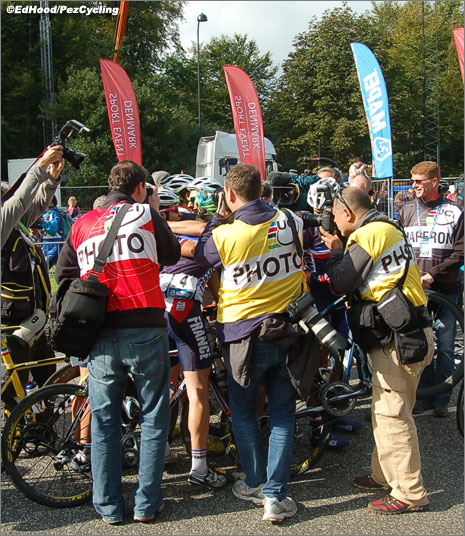 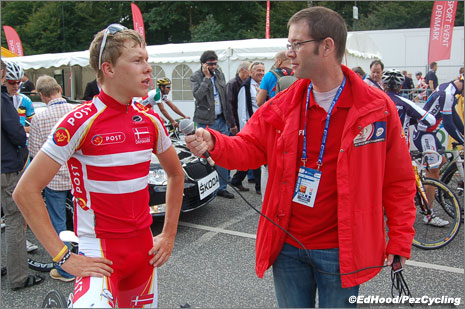 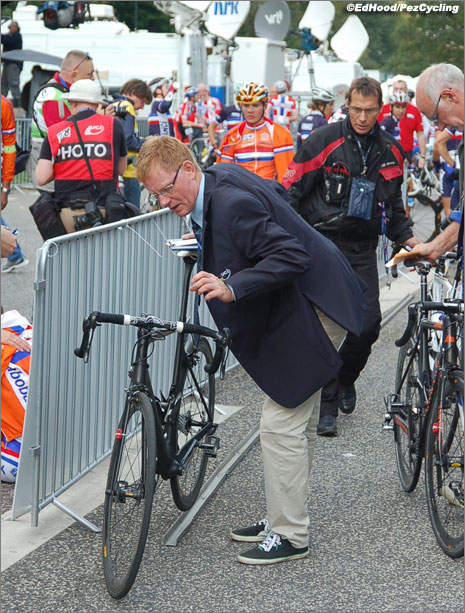 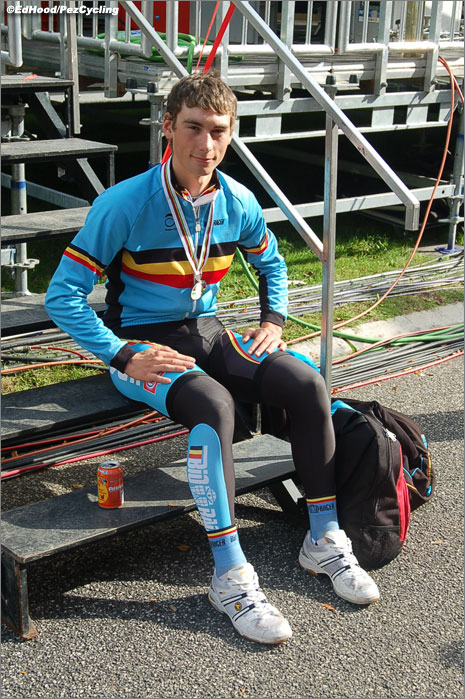 Martijn Degreve of Belgium was in the break too, he took silver; ‘Pierre-Henri was just a little too strong for me !’

Martijn rides for Avia but is off to QuickStep for 2012. 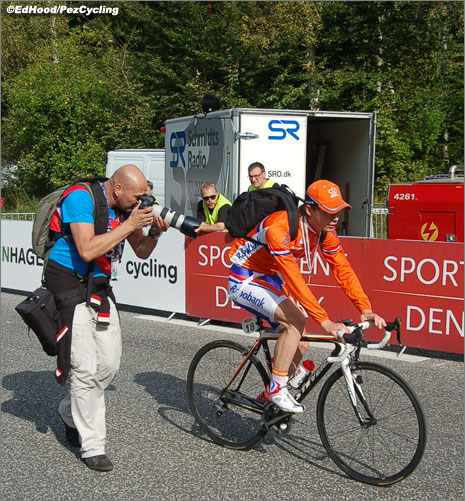 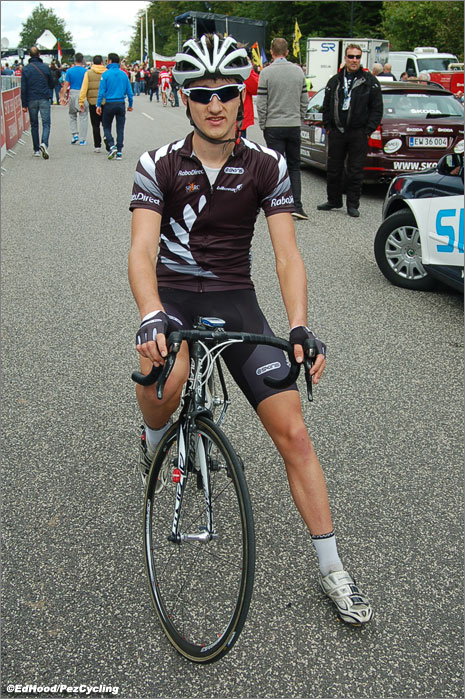 It wasn’t a great day for New Zealand’s junior time trial silver medallist James Oram, who eased in off the back; ‘I’m glad I got my time trial medal or I wouldn’t have been happy with my Worlds.’

Lunch time – damn, if only those sausages weren’t so expensive. 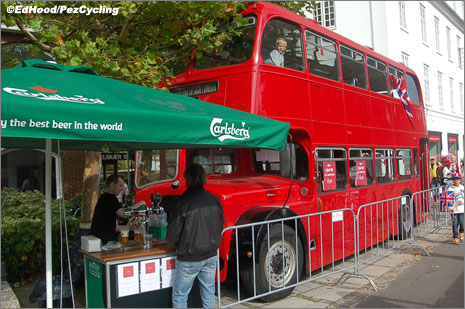 The snack bar is a London bus – property of the Christina Design Team; as part owned by a certain Michael Rasmussen.

He’s served his time, he’s back, he’s running a team and giving riders a job – like it or not, that’s how it is. 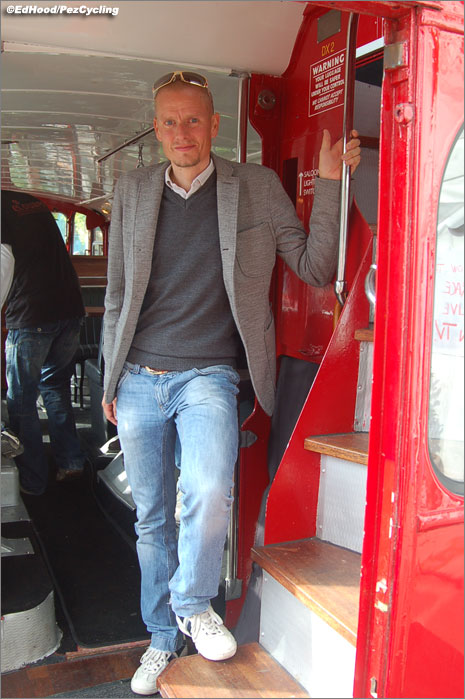 ‘I’m happy with Christina’s first year, already we have sponsors in place for next year and 2013.

Many of our sponsors are Danish so our programme includes a lot of home races but we’ve ridden some high level events – we rode Padania for example, which Basso won.

I knew my Tour days were finished when the UCi, ASO, whoever, told Bjarne (Riis) that they didn’t want me in the race – Bjarne was keen, Saxo were keen, but . . . .

We could have gone Pro Continental for 2012 but we have to learn the ropes before we move up.

We’re here to talk to riders about next year.

I rode part of this circuit in the Tour of Denmark – that hill is very deceptive.

That’s where Gerrans beat Bennati to take the time bonus and seal the race – it’s not necessarily a finish for the pure sprinter.

I think Cavendish can win, but there are a lot of other names, Boasson Hagen, Hushovd and Sagan for example.

It really needs the temperature to be lower and raining for it to be a selective race.’

Statistically France are most likely to win – 10 golds, 5 silvers and 3 bronze.

Jeannie Longo won five of those golds, but I don’t think there will be any more for the French woman.

The Netherlands have won seven, Belgium six and GB four. 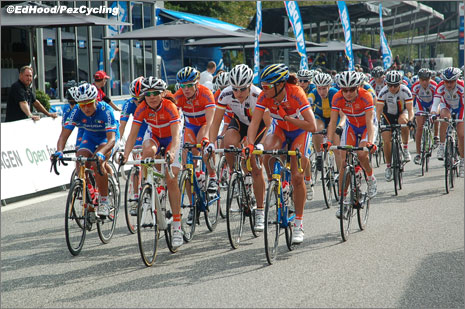 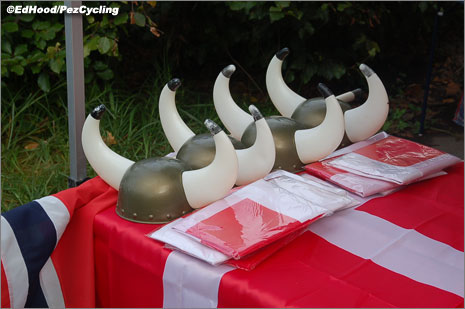 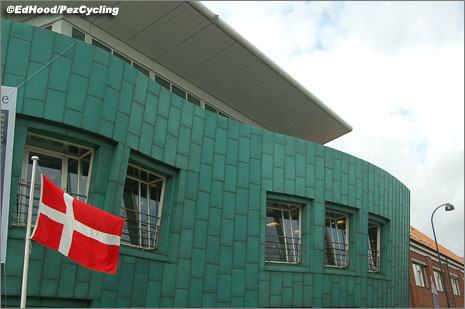 We have a look at the ‘Worlds retail village’ and there’s all you need to be an ‘instant Thor fan’ – but the local architecture across the street is much more subtle.

The speaker meanwhile assures us that something will happen soon; but from where I’m sitting, this is an ‘Emperor’s new clothes’ situation – let’s come straight out and say that this race is a boring procession. 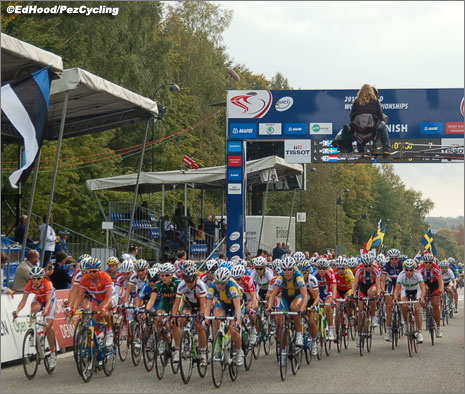 I cannot understand why one or two of the pro girls who don’t have a sprint aren’t up the road showing their sponsor’s colours ?

The journo in the tribune next to me is watching comedy DVD’s on his laptop – enough said, really.

Anyone trying to impress potential sponsors of ladies’ racing must be crying into their Tuborg today. 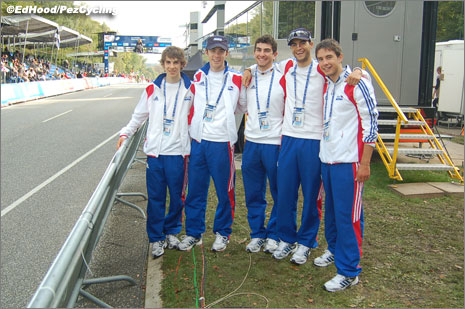 The victorious French juniors appear and are happy to pose for photos – that was one of the hi-lites of the afternoon. 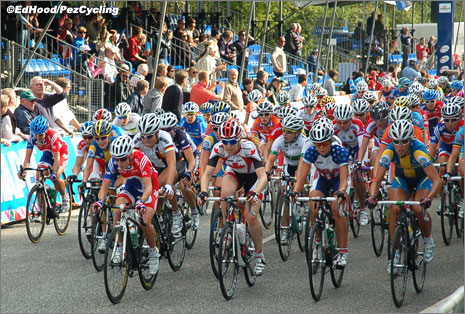 Up on the monitors the club run continues. 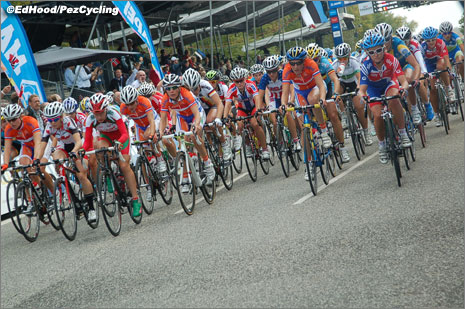 But it’s a little quicker with three to go, a Russian girl attacked on the fastest part of the course and then drove all the way up the hill; maybe she just felt that someone had to do something – anything.

There are flurries on this lap and finally former speed skater Clara Hughes of Canada makes a gap stick – 18 seconds, she swings right to tackle the climb for the third last time.

She’s clear through the line and the bunch doesn’t chase too hard – into the woods, 44 seconds, this is better.

There are flurries but no one can bridge, Hughes ploughs on, the peloton freewheels, the clock says + 31. 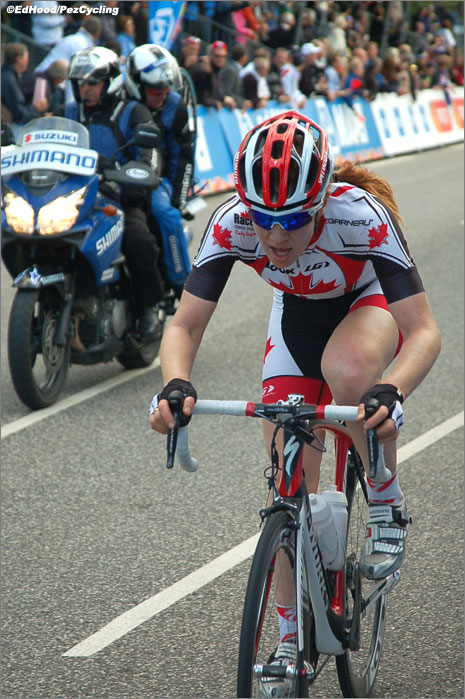 There’s little commitment in the bunch as the Canadian continues on her way – the bell clangs, 37 seconds.

This girl deserves to win; the bunch strings out through the line but back in the ‘burbs they look at each other – the rainbow jersey is slipping away from them.

We reckon she’ll need 35 seconds at the one K mark to win, a rampaging bunch will eat up the seconds on the finish climb.

Finally a chase is organised – The Netherlands have four in line – why don’t GB and Italy help ?

She’s dying and the Dutch are doing a job of work.

The Italians force it, there are flurries – Arndt, but it’s going to be a bunch sprint. 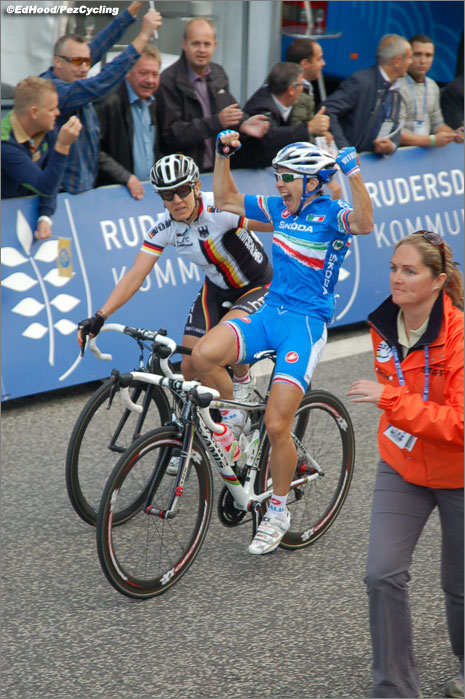 A great finale; a poor, poor race – Pat McQuaid should send a letter of thanks to Clara.

Cav can win it.