Sky rider Ben Swift emerges from a crash filled Stage 2 that saw Cavendish bleeding heavily from his head after a nasty pile up, and the new boy at ‘The Shack’ Robbie McEwen move into the leader’s jersey.

The longest stage of the TDU this year is the Murray River Stage . . . starting at Tailem Bend on the Murray River plateau heading into the Adelaide Hills and finishing on the river plateau 80km upriver at Mannum. The weather today was perfect. 26 degrees, cobalt blue skies, a South Westerly breeze, nothing to trouble the pro’s . . . 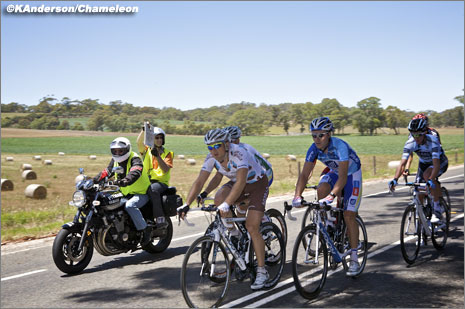 The day’s break includes more than just UniSA riders in 2011.

My day started with two hours on the bike . . yes, coffee, cake and a lovely view of the ocean. I can see why so many riders are bringing their families to this race to escape the Northern hemisphere winter.

I have observed a change in the race this year. This year the local and only non-Pro UniSA team are not allowed to ride off the front alone like they were in 2010. UniSA is a national team of neo-pro’s looking for a step up into the World Tour Teams. The last rider nominated for this years TDU by UniSA was Bernard Sulzberger thanks to his results in the Australian national titles 10 days ago. Over the last few years the tactics have been pure attack from UniSA, the Pro teams have let a UniSA rider go free for most of the day and then wound them in. There have been examples since 2007 – after a break on the first day Karl Menzies and UniSA only lost the Ochre Jersey on the last day by 3 seconds! In 2009 we had Jack Bobridge riding aggressively for them and young Tim Roe in 2010. 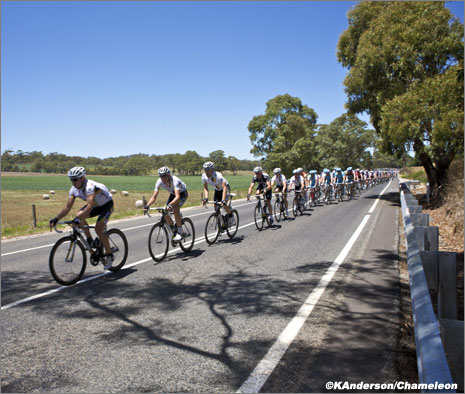 This year UniSA are still on the attack, but they are not alone. Today’s stage saw the UniSA riders joined by a number of Pro Team friends . . . today the break included David TANNER (AUS, SAXO BANK – SUNGARD) and Mitchell DOCKER (AUS, UniSA), who joined the initiator Yuriy KRIVSTOV (FRA, AG2R) about 17k’s into the stage. After the SKODA KOM at the 64km mark Luke Roberts (AUS, UniSA), Simon ZAHNER (SUI, BMC RACING TEAM) and Timothy ROE (AUS, BMC RACING TEAM) bridged across and joined them at the front. With a group this size I was getting curious and excited! 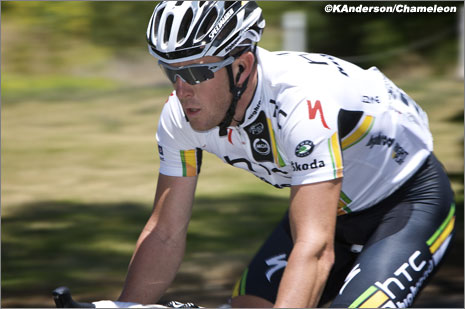 HTC-Highroad were kept busy on the front all day long.

They kept the peloton at bay for most of the day, then team orders took over and the group stopped working together. Suddenly with 30km’s to go Tim Roe (AUS, BMC RACING TEAM) went for it. The crowd at the finish area with me was hushed and nervous, could Tim do it?

Tim is from my club Norwood CC. An Adelaide lad, he is a shy 21 year old, in his first big race with BMC. His time went out to 1min 30 sec . . . The distance to the finish shortened, we were starting to go nuts, anxious to see Tim in the finishing straight . . .10km’s to go and Tim maintained 1 minute on the peloton . . . come on Tim! A number of people were extremely excited and were willing Tim to the line (so was I) . . . coming up to 5km to go and unfortunately Tim was caught . . . I reluctantly started breathing again. 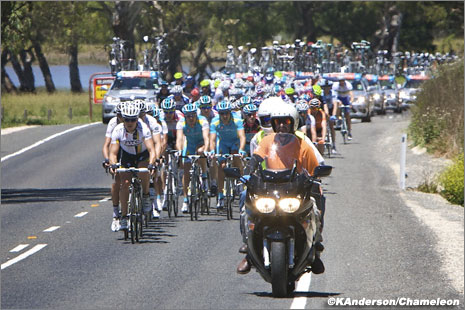 Not long after Tim Roe was reeled in race radio went crazy – a CRASH with 4km to go (outside the 3km rule). We had walked the route into town and it was quite technical and tight with a number of 90 degree corners. The news filtered through the crowd like a wave, Greipel, Goss, Geraint Thomas and Cavendish were the names that resonated out of the list of riders who had fallen . . . Greipel and Goss made it back to the peloton . . . where was Cavendish and Thomas? 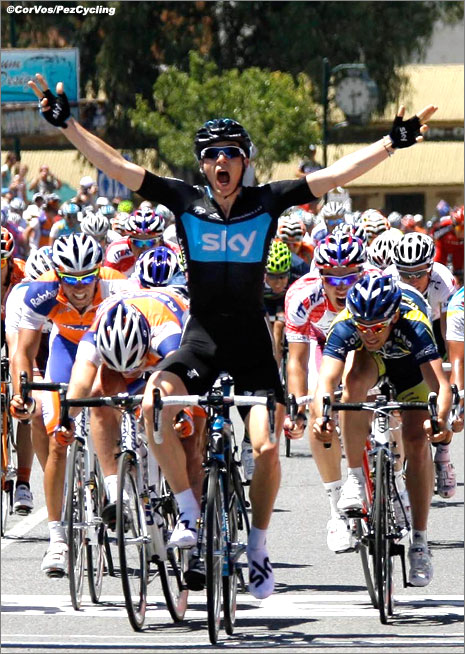 Again, with 1km to go another CRASH! no time for radios – who’s first? Where is Robbie McEwen? . . . we can see a Sky jersey, Radioshack, and Rabobank who is it?

It’s Ben Swift (Sky Procycling) first, Robbie McEwen (Radioshack) second, Graeme Brown (Rabobank) third. Andre Greipel and Matthew Goss finish with the same time due to the crash at 1km to go BUT . . . Robbie McEwen is the new GC leader and takes the leaders Ochre Jersey. Bruyneel and Radioshack appear to be in a strange place – everyone wanted to talk to Robbie and not Lance! 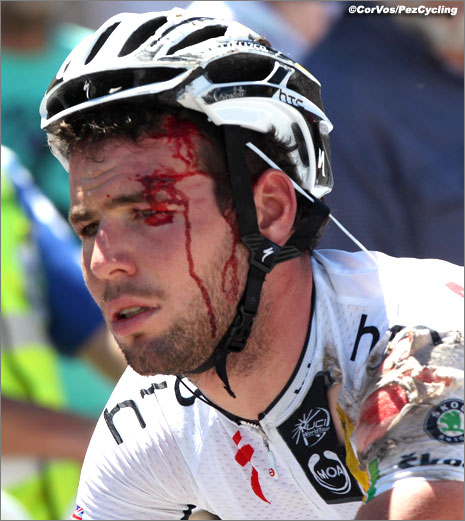 Mark Cavendish didn’t look too thrilled and certainly worse for wear as he crossed the line.

Crash notes . . .
On the crash injuries to Bernard Sulzberger (UniSA-Australia), he has a fractured right collar bone and can’t continue. All that effort just to get to the start line and it ends so quickly. . . cycling is a fickle sport. Cheers to you Bernie for making it to the TDU.

Stage 3 – Unley to Stirling, 129km
Stage 3 sees the riders head from Unley to Stirling, 129km. This starts a few blocks from my home and runs South into Mclaren Vale wine country then into the hills. It’s not that hilly but the route has a nasty uphill sprint finish. Look for the more powerful riders at the front. Will Lance push ‘The Shack’ to the front and keep the Ochre jersey?

Beer Of The Day
Mclaren Vale Beer Companys’ (www.mvbeer.com) VALE ALE. This has hops and hops and hops, yes three hop varieties. The honey taste comes from three malt varieties. Seared chicken breast with a herb crust of oregano, basil, thyme and a hint of salt on rice. It is no fat, all protein and carbs!!! I am lining up some of these tonight at the street party.