Hot was the day, scorching was the racing, and a young racer nicknamed ‘Bling’ steals the stage from the veteran riders caught napping at the finish. Let’s take a closer look at the third stage of the Tour Down Under!

Stage 3: Unley to Stirling – 129km.
No ride for me this morning, I am tapering for tomorrow’s sportif, a number of the pro riders would have wanted a rest day as well, Cavendish for one. Chris Sutton was too sore from yesterday’s crash and decided to take the remainder of the week off to nurse his heavily stitched knee. The non starters from yesterdays carnage included Chris SUTTON (AUS) – SKY PRO CYCLING and Bernard SULZBERGER (TAS) – UNI SA-AUSTRALIA.

The start of the race at Unley was a few blocks from my house, so I had no excuses to not attend, but after last night’s street party, well, I almost had an excuse…a number of yesterday’s beer of the day.

The start line weather was already hot, into the 30’s (up over 100 for our American cousins) when the flag was dropped and the boys rolled off. Cavendish was wearing the bandages from yesterday’s crash and he told the local station radio that today that he was ‘just going to sit in and hang on to get through.’ 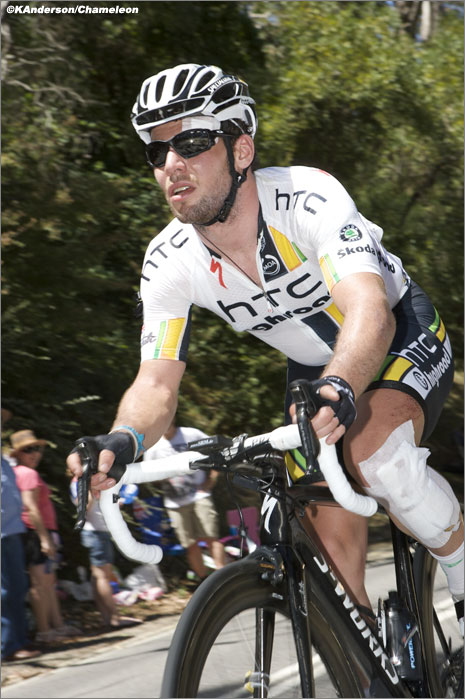 Fortunately (or unfortunately for a banged up Cav in this case) most of today’s stage would be in the hills where the weather is generally a few degrees cooler and the roads shaded. Stirling is a short climb on the bike from Adelaide, ideal for spectating … so we drove. 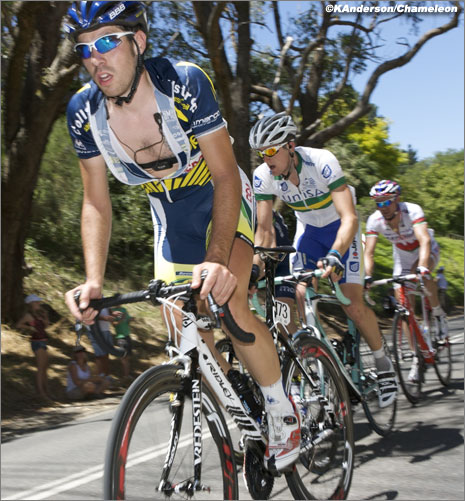 After viewing the departure, we headed for Stirling to watch the three laps of the finishing circuit. The circuit has a number of short shape rises, the lactic acid inducing kind. On the last lap, Lance was at the front working to keep the leader’s ochre jersey on Robbie McEwen. Cav was the most uncomfortable guy in the field struggling with the rises, heat, stitches, and soreness. 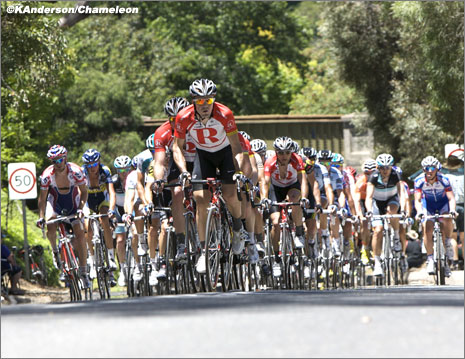 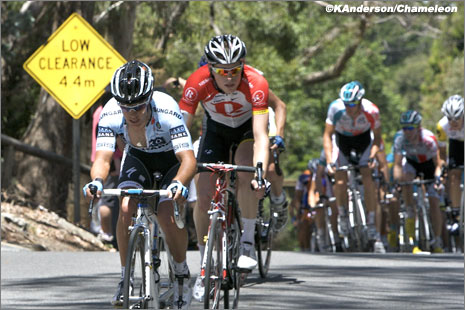 Richie Porte was a late aggressor with Manuel Cardoso, but couldn’t hold off the field.

Another attack on the last lap 3k’s to the finish with a gap of 20-30 seconds max for Manuel CARDOSO (POR) – TEAM RADIOSHACK (last year’s winner of the finish in Stirling) and Richie PORTE (AUS) – SAXO BANK – SUNGARD ….. but that was reeled in about 1km from the finish. This uphill finish did not suit a train setting it up for the sprinters, but there were Greipel, Michael Matthews, Matt Goss, Allan Davis coming to the finish line up the hill … where was Robbie? Matthews pulled away and took the win from Greipel, with Matt Goss third. That was hard work and Matthews put on a little dance to celebrate the win. 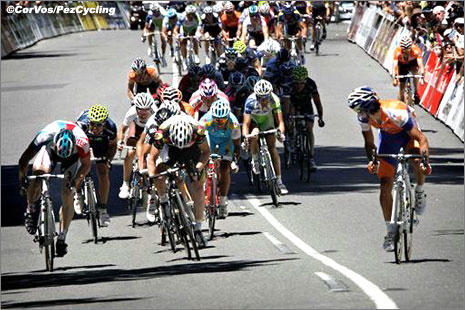 The sprint was no contest: U23 World Champion, Michael Matthews, was untouchable. 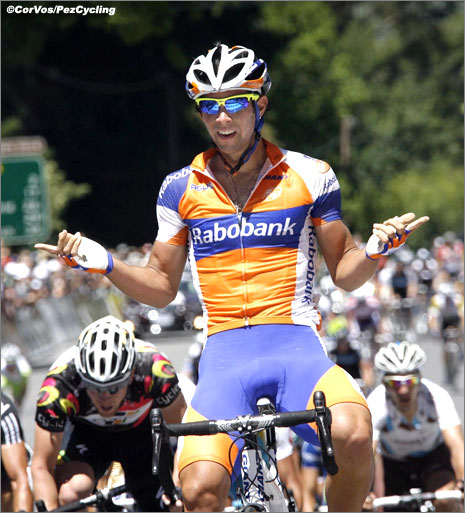 The next question was the overall General Classification, and where did Robbie finish? He finished in the bunch, but had nothing for the sprint. I caught up with Robbie post race and he said he had punctured at the start of the last lap, legs sapped getting back on to the bunch and he had nothing left for the sprint. He loses the Ochre jersey to Mat Goss. 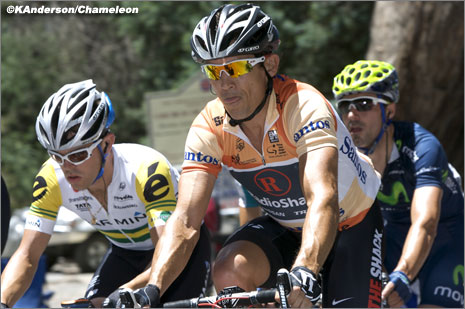 Overall, Robbie is third on 4 secs, Greipel second on 2 seconds with Matt Goss back in the Ochre jersey. After yesterday’s carnage the sprinters are back at the front and Goss must be looking good. But don’t count out Robbie.

Observations From The Peloton
§ Cavendish hung on and got through…16 minutes down; he is dead last on GC. What be more painful for Cav the injuries or being last? That being said no one can question this man’s courage and grit. 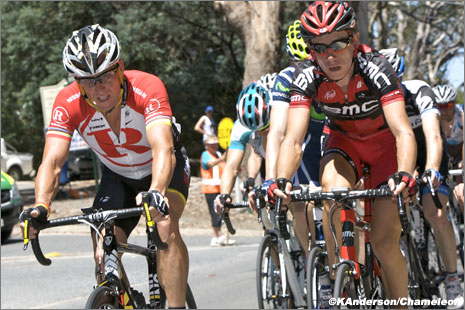 § Lance was spent and did not finish in the front bunch on a powerful circuit, but it was impressive flashback time to see the great man powering up the climb at the start of the last lap in the top 5.

§ The festival at Stirling was awesome.

Stage 4: Norwood to Strathalbyn – 124km
Sportif tomorrow, early start for us and with the neutral stage it is 135km. It will be a bunch sprint, come on Robbie! Look out for Goss. Greipel seems cool about it all, almost a prey animal sitting and waiting to pounce.

Beer Of The Day Coopers Clear; another low carb beer; which I need to stay off tonight with tomorrow’s cycling sportif in mind. It’s awesome with fresh cold prawns (shrimp) on a hot day like today.